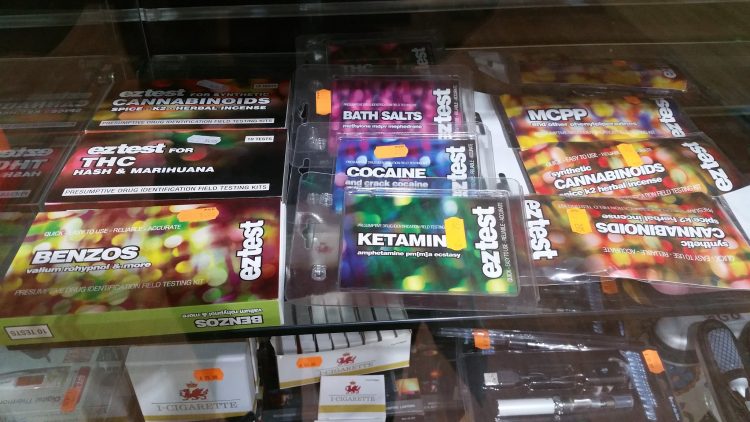 Prohibitionist, ‘just say no’ approaches to drug use do not work and are causing significant harm, according to two much-anticipated inquiries which have called for a reframing of illicit substances as a health and social issue to be managed through harm minimisation strategies including pill testing and decriminalisation of drugs.

The recommendations were made in two separate probes into drug use in NSW: the Special Commission of Inquiry into the Drug Ice, and a coronial inquest into the deaths of six young people at music festivals from MDMA toxicity between December 2017 and January of this year.

Though they had relatively divergent remits, submissions to the inquiries came to the same overarching conclusions: punitive law and order approaches were not effective and, for any marginal benefit realised, were actually causing significant harm.

In the words of Deputy State Coroner Harriet Grahame, who handed down her findings last week:

“It is time to start talking about the risk we create when we favour prohibition, but in actuality have no ability to achieve it.”

Both Grahame and counsel assisting the Ice inquiry came out strongly in favour of pill testing and reframing drug use as a health and social issue rather than a criminal matter, with the ice inquiry closing submissions also emphatically making the case for decriminalisation.

“In our submission there is a strong argument that a prohibitionist approach has not only failed to reduce supply and failed to reduce demand; it is a driving force behind the growth of organised crime.

It is submitted that the evidence to this Inquiry supports the conclusion that the criminalisation of use and possess causes significant unintended and disproportionate harms to those people detected with small amounts of prohibited drugs intended for personal use.

It is submitted that the evidence before the Inquiry supports a recommendation that the criminal offences for use and possess be repealed.”

Though not the formal recommendations of the Ice inquiry, which are not due to be handed down until January, the closing submissions by counsel assisting set out the evidence presented and potential priorities for action, forming a basis for Commissioner Dan Howard’s final report.

Both these submissions and Magistrate Grahame’s coronial findings come down in favour of implementing pill testing in NSW, calling for the consideration of both a fixed-site model and mobile units as deployed in the ACT trials by Dr David Caldicott and colleagues.

Grahame dismantled, in forensic detail, arguments against the policy as put forward by the police commissioner, offering her emphatic support for a trial and directing the NSW Premier to expedite this as a matter of urgency for the coming summer festival season, using the best available technology.

She presented evidence from the inquiry showing a 95% reduction in hospitalisations from a festival where such checking was piloted in the UK, as well as findings from the two ACT pilots at the Groovin the Moo festival.

In 2018, Grahame said the pilot had 128 participants and tested 85 samples, of which two were found to contain the potentially lethal compound N-Ethylpentylone. Half the drugs tested had no psychoactive ingredients but were made of other substances such as toothpaste, milk, glue or paint. Importantly, almost half of patrons presenting for checking said they had changed their mind about drug consumption as a result of the interaction.

Numbers doubled at the testing tent this year, with 234 people queueing and 171 samples tested. Seven were found to contain N-Ethylpentylone and all but one person opted to dispose of their drugs once counselled about this.

During the course of this inquest I have listened to opposing views in relation to the possible benefits or harms of introducing drug checking in NSW. I have reviewed hundreds of pages of reports and peer reviewed articles from Australia and overseas. I have listened carefully to hours of oral testimony, attended a pill testing demonstration and watched numerous documentary reports.

I have taken into account the opinions of experts I consider to be at the top of their professions. I have listened to the views of young people and drug users, police, parents and doctors. I have sat quietly and given this matter my most serious attention.

At the end of my reflection, I am in no doubt whatsoever that there is sufficient evidence to support a drug checking trial in this state (both on-site and fixed). In my view the evidence is compelling.

Of course drug checking is not a magic solution to these tragic deaths. Of course its introduction will not guarantee further deaths will not occur. Drug checking is simply an evidence -based harm reduction strategy that should be trialed as soon as possible in NSW.”

Grahame noted the support of many medical groups for this proposal, including the AMA, RANZCP, RACGP, RACP, ACEM, RDAA, PHAA and the Pharmaceutical Society of Australia.

While she stopped short of recommending decriminalisation, describing this as somewhat beyond the purview of the inquest, she said it should be given “full and genuine consideration” as part of a NSW Drug Summit.

Grahame was highly critical of the NSW Police in her findings, recommending that drug dogs be abandoned as wholly without evidence and directly contributing to drug use harms such as panic ingestion and preloading (implicated in at least one of the inquest deaths). She also condemned and called for a concerted winding back of strip-searching, saying many such searches were conducted unlawfully, were traumatic and also contributed to harmful drug use.

‘A broad range of significant harms’

Pill testing and the cessation of drug dogs and strip searches were among more than 100 recommendations made in closing submissions to the Ice inquiry, covering a wide range of domains including stigma, housing, cultural safety, justice reinvestment and supervised drug use facilities.

Once a world leader in drug policy, NSW had stalled or even regressed in recent years, the submissions said, with no formal drug policy or plan for almost a decade and many issues raised at the 1999 NSW Drug Summit still unaddressed, particularly in rural and regional areas.

A number of specific recommendations were made across a host of domains, but the overarching thrust was that drug use be reframed with a “health, public health and social focus, the goal of which should be the minimisation of harm.”

“A large body of evidence suggests that seeking to prevent drug use by the imposition of criminal sanctions for personal use provides at best a marginal benefit in the form of slightly reduced use, while being associated with a broad range of significant harms,” it said.

In particular, it called for a redressing of resource allocation away from supply reduction activities (law enforcement) towards demand reduction (treatment), noting that treatment service funding would have to double to meet the current unmet need. Some of this funding could come from proceeds of crime, 75% of which is estimated to be linked to drug matters (some $6 million between 2014-2019 according to evidence to the inquiry).

Some of the headline recommendations include:

Commissioner Dan Howard’s final report is due to be handed down to the NSW Governor on January 28, 2020. 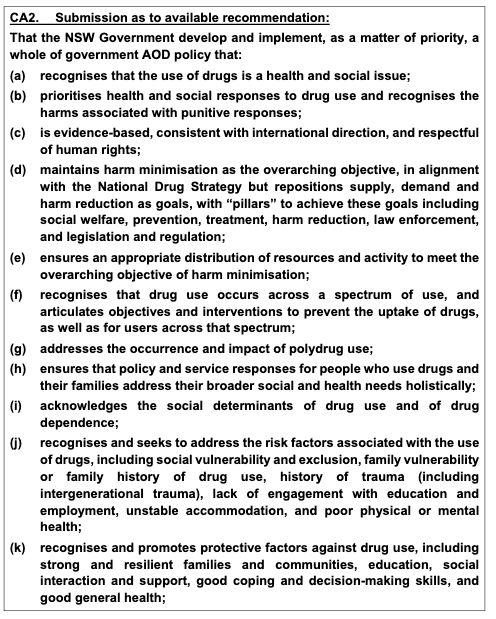 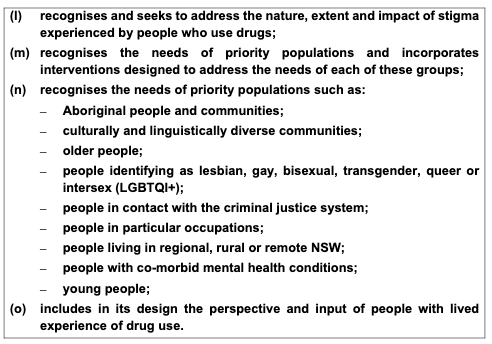