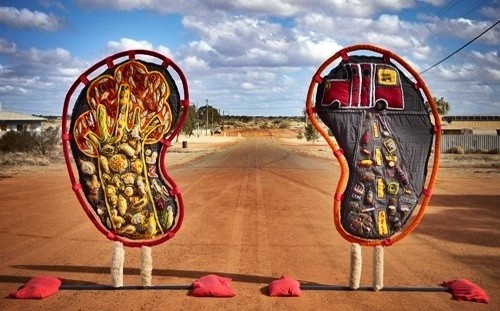 Putting Art Before the Cart: JournalWatch

It will come as no surprise to anyone who has attended a conference hosted by the National Rural Health Alliance or Palliative Care Australia that the arts are central to health and well-being.

From joint weaving projects, created collaboratively by delegates during the conference, to installations on refugee health, photo and poetry displays and concerts by high profile Indigenous bands, both of these organisations have consistently promoted the role of the arts as a vital component of people’s experience of health and illness.

However, the arts have had a lower profile to date in other areas of the health system and many people may be surprised to learn about the central role they play in the success of some specific health care interventions.

In the following edition of JournalWatch, Dr Melissa Stoneham from the Public Health Advocacy Institute of WA, explores a recent study which examines how an arts program is helping tackle diabetes and kidney disease in remote Aboriginal communities.

This study demonstrates that the arts can play an important role in engaging communities to tackle some of our most serious health inequities.[divide]

Health…most Australians appreciate it. Some Australians face barriers and challenges which means it is difficult to achieve it.

Art in health….most Australians don’t appreciate the benefits of this movement!

Yet the arts is moving and shaking in Australia. Over recent years, there has been a growing understanding of the impact that taking part in the arts can have on health and wellbeing. Christina Davies, a researcher from UWA found that engaging in the arts as part of everyday life, such as listening to music, reading, painting, dancing, playing a musical instrument, creative writing and attending arts events could make a difference to the health of individuals and the community.

The link between health and art

A beautiful story on the La Trobe Arts and Health Blog demonstrating the link between health and art is relayed below. On the South Pacific Island nation of Samoa, twenty minutes’ drive from the capital city Apia, is the Tiapapata Art Centre.

Perched on a hillside and surrounded by jungle, it is here where victims of abuse learn to express themselves through art classes in drawing, pottery and woodblock as part of an ongoing art therapy program called Fa’alaiga o Lagona – Expressions of Emotion.

“It is here where thoughts are put into motion to express feelings that are repressed,” explains Tupou Sili, a senior mental health nurse. “What is thought is revealed in action. This is the reason why they are creating these images – however many colours they use for the painting, these express the feelings that are buried within.”

Another study published in the Journal of Psychosomatic Medicine used writing as a treatment for HIV patients and found that writing resulted in “improvements of CD4+ lymphocyte counts.”

So given the increasing pressure on health resources, the arts have the potential to assist in the promotion of health and healing – which is what this month’s JournalWatch article is all about. Craig Sinclair and colleagues from the University of Western Australia wrote an article in the Australian and New Zealand Journal of Public Health which identified positive community responses to an arts–health program that was designed to tackle diabetes and kidney disease in remote Aboriginal communities.

Kidney disease is a major problem in Aboriginal communities, and end-stage renal disease is said to be seven times higher among Aboriginal people, but is even higher in remote communities, where it has been reported to be 30 times greater than mainstream Australian rates.

The most cost-effective treatment for kidney disease includes comprehensive clinical services focused on early detection and treatment of diabetes, supplemented by prevention programs to facilitate lifestyle changes. Yet in remote communities, access to these services is difficult.

This paper describes an innovative art in health program in the Western Desert of Western Australia. If you are not familiar with this region of Australia, it is safe to say that it lies near the meeting of the borders of Western Australia, South Australia and the Northern Territory. So it is certainly remote.

The art in health project is called the Western Desert Kidney Health Project (WDKHP) and it aims to reduce the prevalence and burden of diabetes and kidney disease in 10 predominantly Aboriginal communities in the Goldfields region of Western Australia through early diagnosis together with a better understanding of how to prevent these diseases.

The program includes a mobile screening service which visits remote communities once a year. But what is different about this service, is that along with this screening comes a second truck that delivers arts programs focused on positive, culturally appropriate health messages.

Artists engage community members to convey the message that kidney disease can be confronted and prevented. The artists generally stay around two weeks and their visits end with community members exhibiting or performing their creative work to the entire community.

After the artists leave, the community is then visited by a Community Development Officer who works towards meeting community priorities identified through the art in health program such as the provision of healthy foods in shops or roadhouses, or providing assistance in preparing grant applications for community infrastructure.

The whole point of the paper which is featured in this month’s JournalWatch was to assess the community responses to the WDKHP, and to identify if this outreach model was suitable within the remote community context in which it was delivered.

The research team interviewed 26 community members in three desert communities. Aboriginal co-researchers with connections to each community were employed and the interviewers went from house to house, explaining the study and inviting people to take part in video-taped or audio-taped interviews.

In short, the data indicated that there was almost complete agreement from everyone interviewed that the WDKHP was very good, addressed community needs and should be extended. There was also unanimous support for the value of an outreach clinical screening service.

However upon further reflection, the research team had some concerns whether the unanimity actually reflected genuine support for the WDKHP, or was instead a product of the enmeshed relationships in the small communities involved. In an attempt to capture some contextual information, the community members were categorised into four groups being ‘Community Leaders’, ‘Homelanders’, ‘Refuge-Seekers’ and the ‘Dislocated’. Results remained positive.

The majority of the target population participated in clinical screening, Community Leaders publically endorsed the project, many participants committed to changing their lifestyle and all participants endorsed the preventive message for others – especially the young.

Art has always been an important part of Aboriginal life, connecting past and present, the people and the land, the supernatural and reality. Just as Aboriginal art takes many forms, so should attempts to promote health.

Extending art to promote health and wellbeing seems like a good fit especially when combined with more traditional clinical activities such as the screening in the WDKHP program.

So even if you are not a Van Gogh or a Fiona Hall, you could still consider the benefits of integrating art into your health interventions in an attempt to create a safe place for people to learn new skills, explore and deal with both personal and community trauma, promote health and build social networks.

The Journals reviewed include:-

PrevPreviousWhat keeps you awake at night? And other burning questions for medical regulators
NextFrom Uganda to China, how do the global challenges of medical regulation vary?Next