Putting the focus on Aboriginal and Torres Strait Islander health

At the bottom of this post you can see some of the photos from the day, thanks to the Tweeters in attendance.

Meanwhile, in the article below, health policy analyst Dr Lesley Russell reports on some new findings identifying some of the challenges ahead, if better care is to be provided to Aboriginal and Torres Strait Islander people with chronic diseases.

An update on Closing the Gap in Indigenous health

When the Australian Government announced in April 2013 its continued funding for the National Partnership Agreement (NPA) on Closing the Gap in Indigenous Health Outcomes, I expressed my concerns that the funding provided ($777 million / 3 years) represented a decrease in funds over those provided in 2012-13.

So it is pleasing to report that the funding announcement did not include MBS and PBS expenditures for 2013-14 through 2015-16, which were included in the original Commonwealth contribution to NPA funding ($805 million / 4 years).  These MBS and PBS costs are driven by demand; the Government estimates that they will total $215 million / 3 years.

That would bring total NPA funding to $992 million and thus enables the Government to accurately claim that funding over EACH OF the next three years is more than the $381 million provided in 2012-13.

There is no word on formal agreements with the States and Territories, so we should hope that Prime Minister Kevin Rudd sees these as part of the unfinished business that must be taken off his desk before the election is called. Currently it appears that Queensland is unlikely to come to the party.

In June the Department of Health and Ageing (finally) released the December 2011 Sentinel Sites Evaluation Report.  This report provides information about the implementation of the Indigenous Chronic Disease Package (ICDP) which represents the Commonwealth’s key activities under the NPA.  The Department’s response to this report is also available.

There’s a lot of information in this report and its appendices, although of course it is now very dated.  Lots of numbers have been collected, but it is obviously much harder to get these to tell a story about improved health services and health outcomes.

Here’s my summary of the key points.

1. Under-developed clinical information systems in primary care place serious constraints on the effective implementation of a number of measures in the ICDP, beginning with the need to identify Indigenous patients and to know who has chronic illnesses or risk factors for chronic illness.  The report states that these “serious inadequacies” also impact on the ability to “provide meaningful data on the impact of the ICDP”.

2. While the recruitment of an expanded workforce to implement the ICDP appears to be well on target, there is the perception that this is having a negative impact on other important Indigenous programs by drawing workers away from them.  Presumably this is a result of limited workforce numbers.

3. Programs to increase access to specialists and multidisciplinary team care seem to be encountering problems.  There have been complaints about the lack of coordination of outreach services, difficulties in ensuring that patients turn up for scheduled appointments, and lack of suitable space for visiting specialists in primary care facilities.

5. Health assessments for Indigenous people (MBS item 715) and follow-up services were low in relation to population numbers and the known prevalence of chronic disease.  These assessments are more likely to be done for women than men, and more likely to be done in regional and remote areas than urban areas.  Follow-up referrals to Practice Nurses and Aboriginal Health Workers were very low, and more likely in regional and remote areas than urban, while referrals to Allied Health Services, also very low, were highest in regional Australia.

6. In May 2011 only 49,600 patients were registered with practices receiving payments under the Indigenous Health Practice Incentive Program (IH-PIP) (Urban – 13,600; Regional – 28,300; Remote – 7,700).  Most of the GP focus at that time was on registration rather than on delivering needed services. There was considerable confusion about IH-PIP in the Indigenous community, which is presumably one reason why people were missing out on increased access to MBS and PBS services.

7. The cultural awareness training for health care professionals and staff that is included as part of the ICDP has had little impact; less than 1 in 5 who was interviewed said that there had been a change in their practice as a result.

And below are some self-explanatory tweet-reports from today’s summit, including the announcement from Selwyn Button that the  Queensland Aboriginal & Islander Health Council will host the event next year, together with the Qld Health Department. 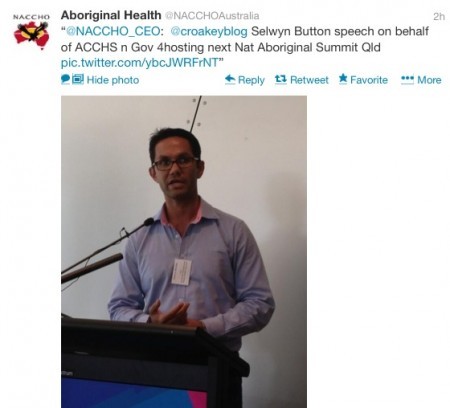 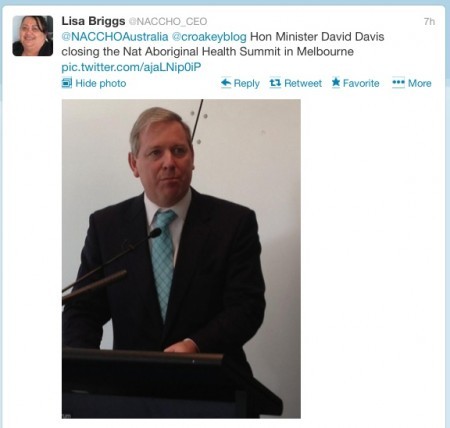 PrevPreviousWhat does $895 buy when it comes to Liberal Party health policy?
NextFrom the FOI archives: “Outcome sought – that Ministers quietly note the plan and nothing else happens”Next