Putting the spotlight on mental health in the mining sector

A new guide has been developed to help address concerns about the mental health and wellbeing of those working in the NSW mining sector.

The background to the guide’s development is described below by Jaelea Skehan, the Director of the Hunter Institute of Mental Health, and Brian Kelly, Professor of Psychiatry and the interim chair of the new Centre for Resources, Health and Safety at the University of Newcastle.

There is no doubt that there has been some recent momentum nationally and internationally around workplace mental health.

You only need to look at the focus workplaces was given in the most recent National Report Card on Mental Health and Suicide Prevention, the development of the Mentally Healthy Workplace Alliance, national conferences such as the recent Mental Health in the Australian Workplace conference, and the development of workplace mental health programs or streams of work at many of our large national mental health and suicide prevention organisations.

Workplaces are partners in prevention. They offer a unique setting to promote mental health and wellbeing, prevent mental ill health and to respond early and well to those experiencing mental illness.

There is strong evidence to support the positive influence of work on people’s health and wellbeing. Besides being the source of income to maintain material standards of living, it also has an important role in providing a sense of purpose and identity, facilitating social connections and participation in the community.

The workplace however, can also have negative impact on the physical and psychological health of workers. Psychosocial characteristics of the work environment including decision latitude and control over work, job strain, job insecurity, job demands and poor social support are all potential risks to mental health regardless of job status (See Stansfield and Candy 2006, for a meta-analysis of Longitudinal studies).

While the emergence of workplace interventions and approaches more broadly are very encouraging, what workplaces are most commonly offered are one-off, often ‘pre-packaged’ programs, or programs than only address one of many issues a workplace may be facing when considering the mental health and wellbeing of its workforce.

This is despite research and logic suggesting that interventions in the workplace setting are most effective when individuals and organisation systems and structures are targeted, rather than just focusing on one or the other.

Reviewing the evidence about the mining sector

There has been much commentary in recent years about the prevalence of mental health problems in the mining industry and in fact, other male-dominated industries.

There has also been commentary about the effect of specific conditions in the workplace – for example long work hours, shift cycles, distances that need to be travelled to the workplace, including specific concerns about drive-in drive-out and fly-in fly-out approaches.

In reality, however, there is limited reliable evidence to suggest that mental ill health is either more or less prevalent in the mining industry than in other industries.

One recent systematic review of male dominated industries (see Roche and colleagues 2012) did suggest that workers in construction and mining industries might have elevated prevalence rates of depression and anxiety. The review also found that the prevalence of mental illnesses varied between occupation groups in the same industry (e.g. blue collar versus white collar).

Even if the mining workforce experienced mental ill-health at the same rates as the population, that would still mean up to 10,000 employees in New South Wales and over 25,000 nation-wide in any one year may experience a mental illness such as anxiety, depression or substance use disorders.

The estimated cost to the industry in New South Wales alone, including lowered productivity, are between $320 million to $450 million per year or $300,000 to $400,000 for an average mine site of 170 people. Not to mention the human impacts on the individual, their family, co-workers and the community.

From a social and financial perspective, let alone the wellbeing of the individuals affected and their families, it makes good sense to invest in promoting better mental health at work.

It is well documented that the construction industry in Australia has taken an industry-wide approach to addressing mental ill health and suicide risk through programs such as Mates in Construction and OzHelp.

In the past two years, the mining and resources sector has followed suit, with the commissioning of research, programs and now a strategic Blueprint for mental health in New South Wales.

It is clear that multi-faceted approaches, led by industry and organisations with the support of health, mental health and behavioural experts are most likely to be effective.

The NSW Minerals Council recently released a Blueprint for Mental Health and Wellbeing, providing a high level guide to addressing the mental health and wellbeing of employees in the state’s mining sector. 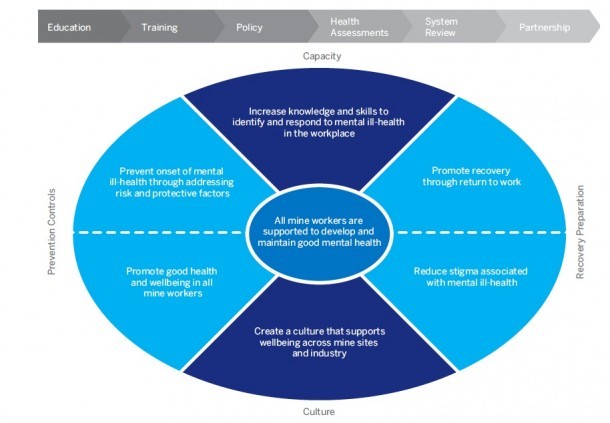 The Blueprint was produced by the University of Newcastle and the Hunter Institute of Mental Health, in conjunction with the Newcastle Institute for Energy and Resources.

This document is industry owned and prescribes actions that the Industry, mines and health partners can take to improve the mental health and wellbeing of their employees. The Blueprint was developed following an initial report to set the scene and engage the Industry in NSW and a workshop with researchers, mental health experts and mining representatives to set priorities for action.

It sets a range of strategic directions across the full spectrum of promotion, prevention and recovery approaches including to:

Despite the leadership shown by the NSW Minerals Council, of course results will only be achieved with continued investment at an industry, site and individual level.

The Blueprint is available for download here. It is part of a range of work being done under the auspices of the Mining and Mental Health Program – led by the Newcastle Institute for Energy and Resources, the University of Newcastle, the Hunter Institute of Mental Health and the Centre for Rural and Remote Mental Health.

• Jaelea Skehan is the Director of the Hunter Institute of Mental Health, a national organisation committed to the prevention of mental illness and suicide, and Brian Kelly is Professor of Psychiatry and the interim chair of the new Centre for Resources, Health and Safety at the University of Newcastle.

Putting the spotlight on environmental health expertise and challenges

PrevPreviousA great big wrap of Congress Lowitja coverage
NextOn climate change and human survival: this is an emergency (and how health professionals might respond)Next