How to save more than half a million dollars (and feel much better).

That could be the subtitle for a new book telling the stories of people who have quit smoking while living with a mental illness.

Maxie Ashton, Project Manager of the Tobacco and Mental Illness Project in South Australia, explains below why smoking among people with mental health problems is a social justice issue.

(I particularly liked the story about the ex-smoker who successfully advised their psychiatrist on how to quit smoking).

Telling some stories that matter

Now I can smell the orange blossom! is a record of real life stories of 21 people who have managed to quit tobacco while living with a mental illness. The stories bust the long held myth that people with mental illness who smoke can’t or don’t want to quit.

The book is produced by the South Australia Tobacco in Mental Illness Project.

All the storytellers live with a mental illness which has had a big impact on their lives. They had been heavy smokers for many years and had been experiencing the serious health effects of smoking. They were all heavily addicted to nicotine which they said was overwhelming, and in the beginning, they didn’t believe they would ever be free of tobacco.

However, step by step they worked toward their goal and these stories are a powerful record of their journey in tackling one of the most challenging addictions. 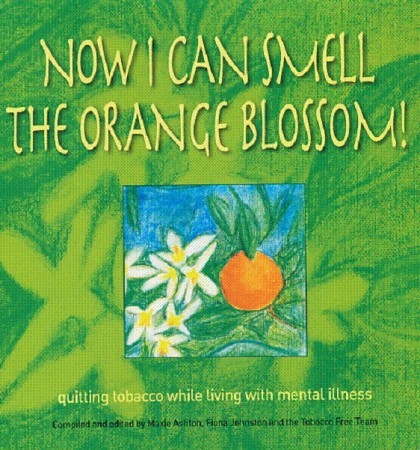 Now they are living life tobacco free, and experiencing the benefits of better health, they say they can breathe better, feel fitter, and, get sick less often.

In addition to better health, they also report better finances. They say they can pay the bills more easily, they have money to spend on themselves, and they are able to save towards something really special.

At the time the book was written, the 21 storytellers together, had not smoked more than half a million dollars worth of cigarettes.

These are stories that are rarely told. While the dangers of smoking are well known, it is not well known that many smokers are also living with a mental illness. Access Economics reported in 2007, that people living with mental illness account for approximately 38% of all smokers, and they smoke at least 42% of all the cigarettes sold in Australia.

More people are coming to see tobacco smoking as a social justice issue. As smoking rates have declined overall, smoking has become both a marker of and contributor to social disadvantage.

At the book’s launch, the Minister for Health in South Australia, the Hon John Hill said, “Supporting this group to tackle tobacco is a social justice issue for our community and this book provides a clear record of the importance of this work. The stories in this book tell of great courage, ingenuity, creativity and wisdom. They are a joy to read.”

Mark, one of the storytellers said: “I had a good plan to quit and when I did I made a foundation for a new life, for opportunities I couldn’t have dreamed of!”

Reg said: “When I told my psychiatrist, who was also a smoker, that I’d stopped smoking, he asked me for advice on how I did it and the next time I saw him he hadn’t smoked for three weeks!”

Gillian said: “After 35 years of smoking, it was fantastic – physically I felt healthier, my finances improved, I felt emotionally stronger and my social life was better, and I could smell the orange blossom!”

The storytellers have also contributed their art work, photography and poetry and the book is a beautiful collection of colour, hope, joy and wonderful life changing achievement. They all wanted to tell their stories in the hope that others would be inspired, and get the support they need to become free of tobacco.

Now I can smell the orange blossom! – quitting tobacco while living with mental illness can be ordered for $20 plus postage and handling via QuitSA.