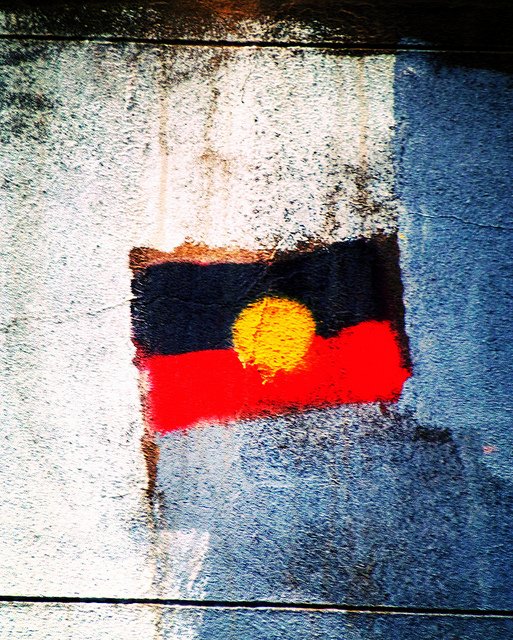 Radical rethink of Closing the Gap required, despite some progress

The tracking of health, education and employment outcomes has come to be a key plank of Indigenous affairs policy in Australia in recent years.

The focus on measuring progress against a set of indicators is most prominent through the Closing the Gap report, which the prime minister has presented to parliament each year since 2009.

The latest Closing the Gap Report indicated that only one of these targets – to halve the gap in Year 12 attainment by 2020 – was on track to be met. To that end, the release of 2016 Census data in November provides a valuable update on three of the seven targets.

Criticism of the Closing the Gap approach

The “Closing the Gap” approach to Indigenous affairs has come under sustained criticism from several quarters. Some have critiqued its approach to monitoring because it focuses on the needs of government rather than the aspirations of Indigenous people. Critics also say it highlights problems rather than strengths.

A further drawback relates to the use of relative measures. This means improvements to Indigenous outcomes (such as reduced smoking) may be obscured if the non-Indigenous outcome also improves.

More fundamentally, the Closing the Gap framework risks failing to acknowledge that statistical gaps are the result of powerlessness and a lack of resources. This blindspot matters because it suggests that gap-closing is only a technical policy matter, rather than also being a political issue.

If statistical gaps are to be closed, structural inequalities must be tackled, such as through constitutional reform to create a representative Indigenous “voice to parliament”.

The targets continue to serve at least one useful purpose: they ensure all levels of government are held accountable for meeting, or failing to meet, their policy goals.

One target aims to “halve the gap in employment outcomes between Indigenous and non-Indigenous Australians within a decade (by 2018)”. If this were measured using census data, it would imply a government agreement that 57% of working-age Indigenous people would be employed by 2016.

The chart below shows the Indigenous employment rate has declined dramatically in remote areas. It increased only very slightly between 2006 and 2016 in non-remote areas. 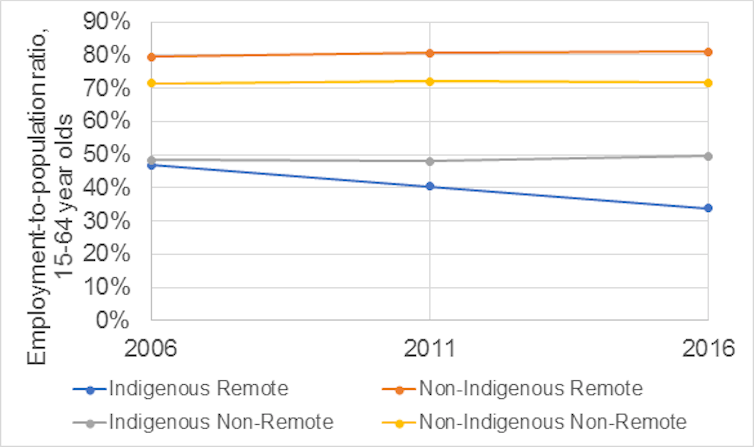 The phased abolition of the Community Development Employment Projects (CDEP) has driven much of the remote employment decline. This was a locally led job creation and community development program that was treated as employment.

The work-for-the-dole scheme that replaced the CDEP has been criticised for its onerous activity requirements and below-award rates of pay.

One of the consequences of abolishing these jobs has been the transition of CDEP participants into statistical unemployment – hence the drop in the employment rate. This is likely to lead to falling incomes, which is especially concerning given the already alarmingly high Indigenous poverty rates in remote Australia.

However, according to the census data, a large number of Indigenous people appear to have dropped out of the labour market entirely. The graph below shows the labour force participation rate, which is calculated as the sum of the employed population and those looking for work, as a percentage of the working-age population. 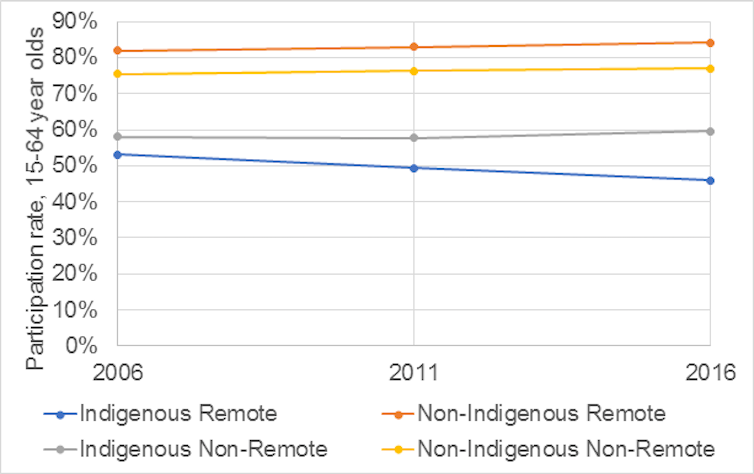 If employment gaps are to close in remote areas, a radically different policy approach is needed. Current approaches, which do not empower or resource Indigenous people to create jobs, are clearly failing.

High school attainment is the good news story among the Closing the Gap measures. 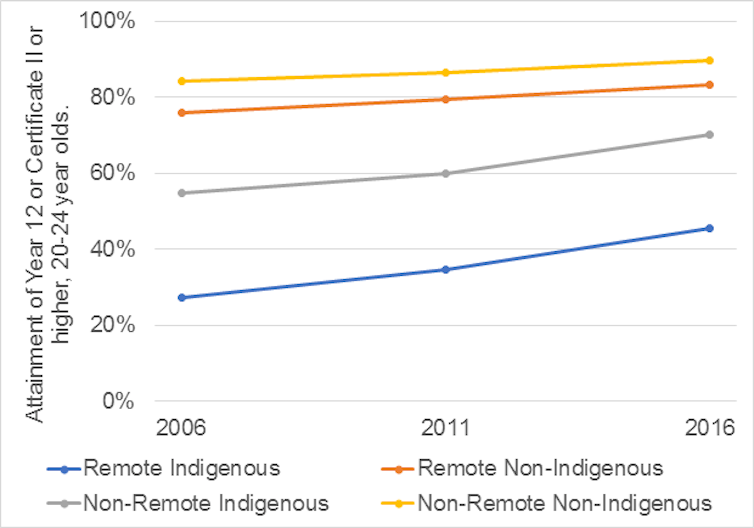 High school attainment or equivalent among Indigenous and non-Indigenous 20-to-24-year-olds, 2006-2016, by remoteness. Attainment is defined as completion of Year 12 or attainment of a qualification at Certificate II level or higher.
Authors’ calculations from the 2006, 2011 and 2016 censuses, using the 2011 remoteness boundaries.

It remains to be seen whether this increasingly educated younger Indigenous cohort will find employment opportunities.

Given the success in meeting this target, policy attention should now turn to ensuring that the quality of education that Indigenous Australians achieve approaches that of the non-Indigenous population, and that the convergence in education rates continues beyond 2020.

The initial Closing the Gap target, agreed to by the heads of government in 2009, aimed for complete access to preschool for Indigenous children in remote communities.

By 2013, that target was still far from being met. Consequently, it was replaced by a more modest target of 95% Indigenous early childhood education enrolment nationally by 2025.

Progress towards this target is particularly difficult to measure.

In the chart below, we use census data from 2006, 2011 and 2016 to track progress toward this goal, while noting that some census data respondents may not classify long daycare as a form of preschool.

If these data are credible, despite the relatively rapid increase in Indigenous preschool enrolments between 2011 and 2016, the revised Closing the Gap target will still not be met. 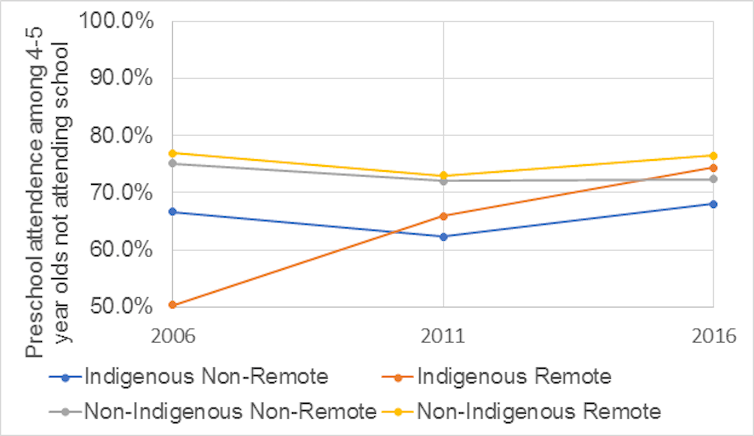 Preschool attendance among four-to-five-year-olds not attending school.
Authors’ calculations from the 2006, 2011 and 2016 censuses, using the 2011 remoteness boundaries.

Time for a rethink

As a result of the sustained failure to close gaps and critique from Indigenous people, the federal government is rethinking the Closing the Gap targets.

The deteriorating employment outcomes in remote Australia suggest a radical rethink is urgently needed to put resources – and the power to direct them – into Indigenous hands.

PrevPreviousBeyond the social determinants: a manifesto for wellbeing
NextTen things Australia can do to be a human rights heroNext