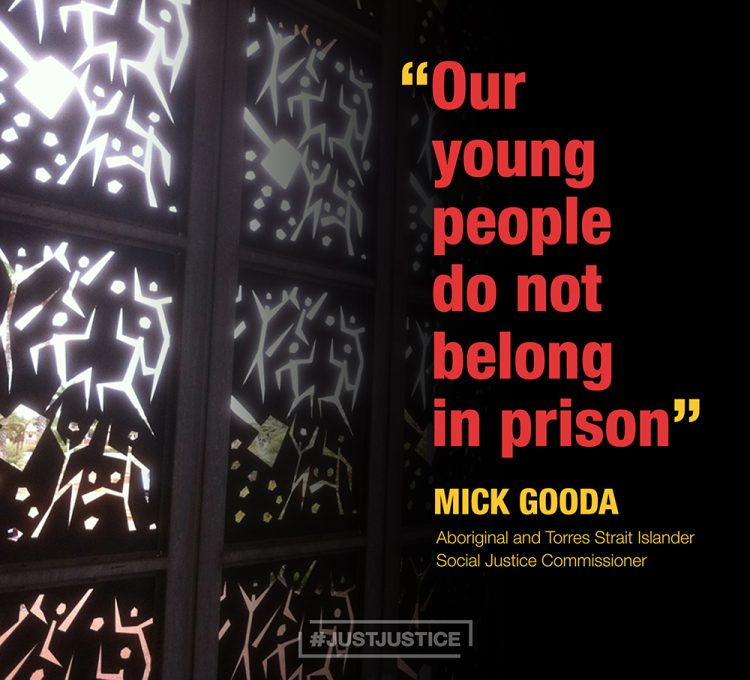 This image was created in 2016 as part of Croakey's #JustJustice project. (Mick Gooda is no longer the Commissioner)

#RaiseTheAge is critical for Closing the Gap targets: senior paediatrician

Introduction by Croakey: This week, Australian governments have sent very mixed messages on their commitment to improving the lives of Aboriginal and Torres Strait Islander people.

On one hand, the new Closing the Gap agreement includes a focus on the critically important public health issue of reducing the detention and incarceration rates of Aboriginal and Torres Strait Islander children and people.

On the other hand, the nation’s Attorneys General have drawn widespread condemnation for their failure to act on advice to raise the age at which children can be imprisoned from 10 to 14 years – a decision the Public Health Association of Australia and others have described as an example of racial discrimination, as it disproportionately harms Aboriginal and Torres Strait Islander children.

Keeping the age of criminal responsibility at 10 is an assault on the health and wellbeing of some of Australia’s most disadvantaged children, according to Elizabeth Elliott, Professor of Paediatrics and Child Health at the University of Sydney.

Below, she critiques a suggestion from Council of Attorneys-General meeting that there is not enough information on the alternatives to imprisonment for children aged 10-14, saying that programs to address inequity and disadvantage and target social determinants will decrease the numbers of children involved in the justice system.

Early assessment of children with developmental needs will identify their challenges and strengths, facilitate accurate diagnoses and allow early educational and health treatments that will disrupt a trajectory to juvenile justice, she says.

As a paediatrician I am dismayed at the recent decision by Australia’s Council of Attorneys-General to defer –till at least 2021 – their decision about raising the age of criminal responsibility. This was a missed opportunity to improve the health and mental health prospects of some of our most vulnerable children.

It leaves Australia out of step internationally; ignores calls from legal and medical professionals, educators, human rights and Indigenous groups; has drawn UN condemnation; and fails to act on recommendations from the UN Committee on the Rights of the Child and the Royal Commission into children in juvenile detention in the NT.

In short, we are pursuing a path that will potentially harm individuals and be costly to our economy.

What is the ‘age of criminal responsibility?’

The age of criminal responsibility is defined as the age above which children are deemed to have the capacity to commit a criminal offence. In all Australian states and territories, this is set at 10 years, which means that a child of early primary school age can be committed of a criminal offence and incarcerated. Below this age, the ‘defence of infancy’ can be used.  https://lylawyers.com.au/age-criminal-responsibility-australia/

In Australia, an additional legal provision can be used as a defence between the ages of 10 and 14 years. This law, called Doli incapax translates to mean incapable of crime or evil. To bypass this provision, the court must prove that the child in question truly understands that their actions were very wrong.

How do we stand internationally?

Internationally, the age of criminal responsibility varies from as young as seven years in India and Thailand, to 10 in New Zealand and England, 12 in Belgium and Canada, 14 in Germany and Japan, and 16 in Portugal.

Variation exists within countries according to the severity of the crime and by jurisdiction – many states in the USA do not legislate a minimum age.

In Australia, individuals move from juvenile to adult justice systems at 18 years of age. The criminal justice system is no place for children with severe developmental disability, regardless of their age.

How many kids are supervised by youth justice and who are they?

The Australian Institute of Health and Welfare estimated that on an average night in 2018 nearly 1,000 children and youth aged 10-17 years (3.5/10,000) were in youth justice detention after involvement in, or alleged involvement in a crime.

Of these, an estimated 600 were under the age of 14.  Most (90%) were boys, 59% were Indigenous and 60% were not yet sentenced. Many more were under youth justice supervision in the community.

Many children involved with the justice system have had a disadvantaged start to life; they have experienced early life trauma including out-of-home care, abuse or neglect; live in overcrowding; or have faced parental separation, incarceration or drug and alcohol use. The majority are Aboriginal or Torres Strait Islander children.

What has been missing from the debate is the recognition that many have a disability, often unrecognised.

In Banksia Hill detention centre in Perth, for example, 36% of all children and youth were found to have fetal alcohol spectrum disorder (FASD) and 89% had cognitive impairment.

I have seen many children – as young as 11 and disabled by FASD – who, having experienced unimaginable early life trauma are detained following petty crime. They act younger than their age. They are impulsive and easily misled. They can’t distinguish right from wrong. They simply don’t have the intellectual capacity to comprehend the implications of their actions. They don’t learn from their mistakes.

They reoffend and are charged. They lack the cognitive capacity to negotiate the justice system, including acting as a reliable witness. Then begins a seemingly inexorable cycle of crime and incarceration, far from home, and ending, sadly far too often, with death in custody.

Few children in juvenile justice have been adequately assessed by health professionals prior to engaging with the justice system and for many there is lack of information about their cognitive capacity, let alone a definitive diagnosis. This may impact the way in which they behave and the expectations placed on them by the legal profession and the courts.

It is thus important that all young offenders be screened for FASD and other developmental disability when they first come in contact with the justice system.

The health and mental health harms of deprivation of liberty in youth detention are well described and are even worse in younger children – high rates of general and oral health problems, mental illness and substance abuse, sexually transmitted diseases, depression, self-harm and suicide, conduct disorder and FASD.

Yet access to age-appropriate, child-focused services is often limited.

The UN Convention on the Rights of the Child outlines our obligation to protect children – regardless of race, gender or culture –- from violence and abuse and exploitation, to allow them access to adequate nutrition and free primary education, and appropriate healthcare.

Perusal of the report of the Royal Commission into the Detention and Protection of Children in the Northern Territory will leave you in no doubt that justice detention represents a deprivation of human rights and is inherently harmful.

There have been many calls to raise the age of criminal responsibility. In 2017 the Royal Commission into the Detention and Protection of Children in the Northern Territory recommended the age be lifted to 12 years.

By 2019 the UN Committee for the Rights of the Child recommended the age be increased ‘to at least 14 years’ in all countries, in light of scientific evidence that abstract reasoning skills are not fully developed till age 12-13 years and to align with current international practice.

Many who have lobbied for a rise in the age to 14 years are disappointed by the Attorneys General’s decision, as reported by Croakey. Twitter is littered with condemnation. The Australian Medical Association “is in disbelief that the Council of Attorneys-General has postponed the decision to #RaiseThe Age, claiming there is a need for further work to occur regarding adequate processes and services for children who exhibit offending behaviour”.

The Royal Australasian College of Physicians says it “provided clear medical evidence (to the Council) explaining why the age should be raised and calls (for this issue) to remain on the agenda of government”.

The Public Health Association of Australia says it is “highly disappointing to see lawmakers maintain the age of criminal responsibility at 10 years – it should be at least 14 to prevent a potential lifetime of harm”.

Aboriginal leader William Tilmouth calls for change, recalling when he went to Darwin’s youth detention centre at 14. “I remember crying in my cell the first night I was there. I cried in my cell; I was just a boy.”

What are the alternatives?

In the official communique of 27 July 2020, the Council of Attorneys General “noted the (Age of Criminal Responsibility) Working Group’s work to date and noted that the Working Group identified the need for further work to occur regarding the need for adequate processes and services for children who exhibit offending behaviour”.

The NSW Attorney-General Mark Speakman said he was not convinced of viable alternatives to the juvenile justice system. “There’s an in-principle issue about whether you should raise the age of criminal responsibility at all, but if you do, you need to know what is the alternative regime,” he said.

Yet research suggests a number of options.

Programs to address inequity and disadvantage and target social determinants will decrease child involvement in the justice system. Children need to be kept safe and at home and families given support.

Early assessment of children with developmental needs will identify children’s challenges and strengths, facilitate accurate diagnoses and allow early educational and health treatments that will disrupt a trajectory to juvenile justice.

If a crime has been committed, there are alternatives to detention, while awaiting or after sentencing.

The human and economic value of a justice reinvestment strategy for Australia was well articulated in a Senate Inquiry.

Justice reinvestment shifts costs and services from detention facilities into community settings, providing access to prevention, treatment, rehabilitation and diversionary programs in disadvantaged communities where they are most needed. These programs not only reduce crime and detention rates but provide community capacity-building and increase community safety.

And they save money. The Senate Inquiry into Justice Reinvestment estimated the daily cost of detaining a juvenile offender in NSW in 2010-11 was much higher ($A652) than that of community supervision ($A16.73).

Multi-systemic therapy is one evidence-based and cost-effective way to reduce anti-social behaviour and offending in children and youth in the community (see here and here).

An holistic approach to health, community-based cognitive behavioural and family therapy, treatment for anxiety and depression, social skills training, and attention to health and dental needs are key.

This week, the Minister for Indigenous Australians, Ken Wyatt, and NACCHO’s CEO Pat Turner announced 16 new targets for Closing the Gap between opportunities and outcomes for Indigenous and non-Indigenous Australians. One of these is “to reduce the rate of Aboriginal and Torres Strait Islander young people (10-17 years) in detention by at least 30 percent” by 2031. This could be readily and rapidly achieved if the age of criminal responsibility was raised to 14 years – an opportunity lost this week.

Achieving this target will also be assisted by a suite of other new targets developed by the Coalition of Peaks (a network of Aboriginal and Torres Strait Islander organisations). These include targets to ensure a healthy start to life (healthy birth weight, access to early childhood education, improved early child development, and decreased placements in out-of-home care). New targets to address housing, decrease violence towards women and children, and increase opportunities for education, training and employment will also lessen disadvantage and disrupt the causal pathway that leads to juvenile justice.

For the sake of our most vulnerable children we must continue to advocate for change to the age of criminal responsibility and the introduction of evidence-based and culturally relevant alternatives to juvenile detention.

“No child belongs in prison”. Australian governments condemned for failure to act on minimum age