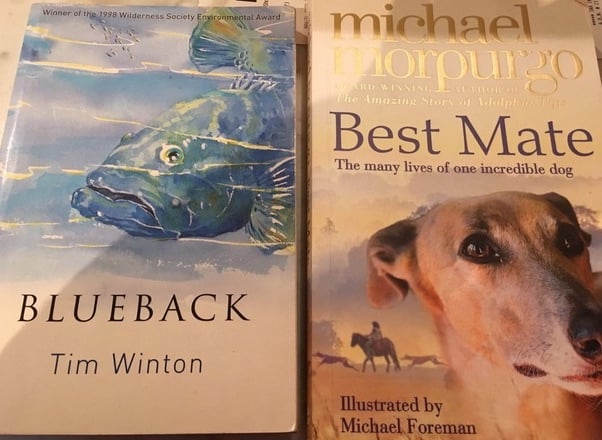 Some of the books discussed at #CroakeyREAD

Real-time wrap of the #CroakeyREAD conversations and news (part three)

And here is the third and final part of our rolling coverage of #CroakeyRead discussions about health, books and reading, with this fabulous program of guest tweeters. (Check out part one and part two).

US civil rights and southern politics

Greg Truman tweeted in from New York City. An Australian journalist, author, editor and story consultant, his upcoming book is co-authored with @DougJones, the Democratic Party candidate who stunned the US political scene in November by defeating Trump-backed Roy Moore for a Senate seat in the deeply conservative state of Alabama.

“Bending Toward Justice: The Birmingham Church Bombing that Changed the Course of Civil Rights” will be released in January through St Martin’s Press.

It’s a redemption story. Doug knows the South has to face up to its past in order to move on. We see that in so many ways in today’s political environment as well.

Here is a great similarity between the events and political atmosphere in the South then and now. Doug grew up in segregated Birmingham. His ongoing goal is to not allow what happened then to happen again.

That led organically to a situation where he felt compelled to run for office in Alabama where a Democrat it was perceived had no chance of election to the Senate. 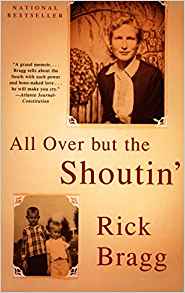 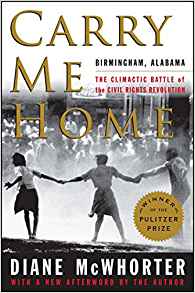 The book will feature a foreword by the great Rick Bragg whose work is compulsory reading for anyone looking to taste the beauty and wretchedness of the South.

Diane McWhorter’s Pulitzer Prize winner is a magnificent personal insight and document of record about Birmingham and the civil rights movement.

A few more I find relevant: anything by Taylor Branch,  There Goes My Everything –  Jason Sokol, Strangers in Their Own Land – Hochschild, Dog Whistle Politics – Lopez, Just Mercy – Stevenson, The New Jim Crow – Alexander, Fascism A Warning – Albright #CroakeyREAD.

I’ve always been interested in both politics and the culture of the South. Since committing to Doug’s project I’ve scrambled to educated myself. 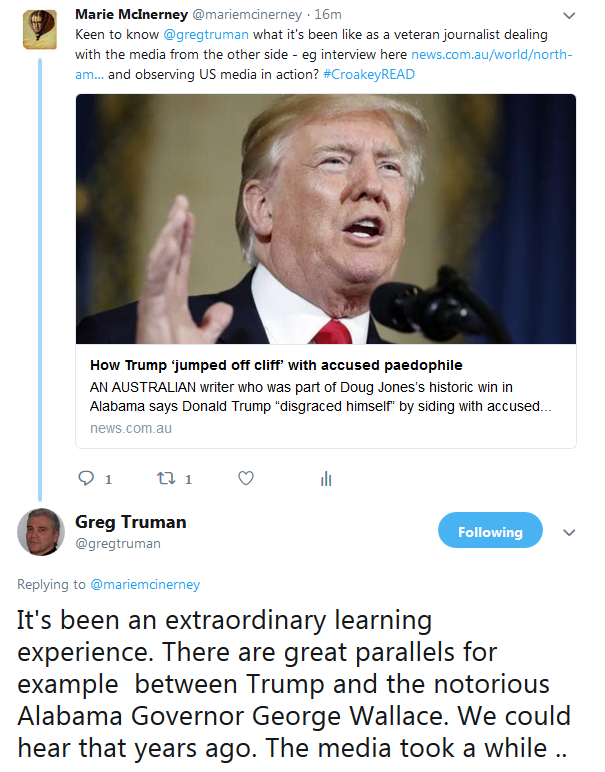 What we’re witnessing is how right LBJ was to say he’d handed power to the GOP for decades by signing the Civil Rights Act.

This is the backlash, perhaps made worse by the national Democratic Party decision to all but abandon the South and parts of the heartland over the last few decades.

There is no doubt that the election of Senator Jones will turn that around. It is evidence that an authentic centrist leader can be elected in the South.

Much of this mayhem has its roots in the South, and it will be the South that leads the country out of the mess. 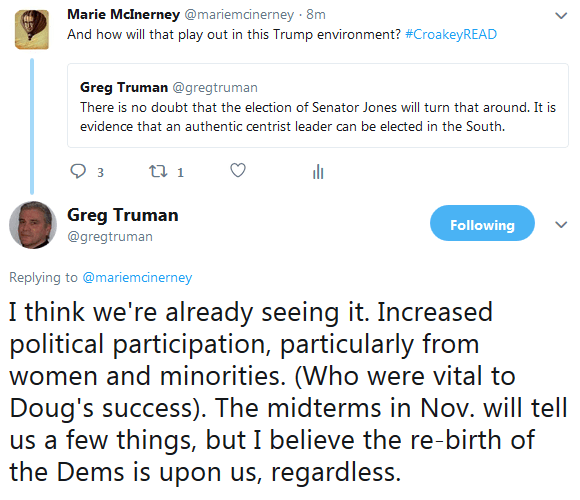 The GOP controls just about every level of government in cities and states. That provided a platform for this sad ‘revolution’. Republicans were more politically astute. They have been driving the car since Nixon.

It’s important that politicians and the media don’t think a “one size fits all” approach is appropriate in the US. The place is mindblowingly diverse politically. That’s been a Democrat downfall.

Writing is good for the spirit. The GROWING UP ABORIGINAL IN AUSTRALIA anthology gave over 50 contributors a platform to share the stories of their childhood experiences, challenges, values and hearts. #IndigenousVoices #CroakeyREAD

GROWING UP INDIGENOUS is a small collection of biographical stories capturing the experience of growing up in Australia as an Aboriginal and/or Torres Strait Islander person. The authors range in age from young adults to older women and men.   #CroakeyREAD 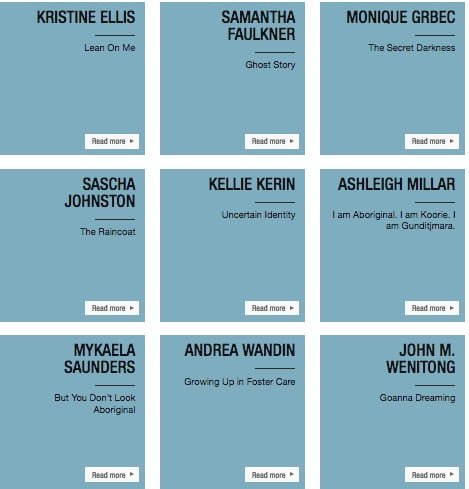 THE MACQUARIE PEN ANTHOLOGY OF ABORIGINAL LITERATURE was a landmark publication with 81 contributors across genres from ‘Bennelong’s Letter’ of 1796 through to Tara June Winch’s SWALLOW THE AIR in 2007. #IndigenousVoices #CroakeyREAD 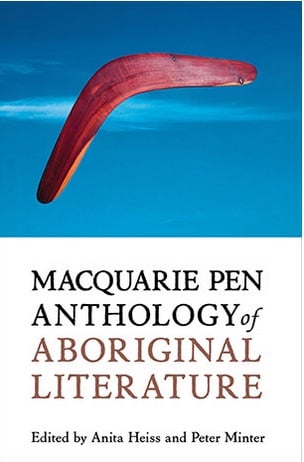 Sharing stories of identity, the Stolen Generations, living on different country around Australia empower the author and the reader. BlackWords  @AustLit has a number of literary trails to guide you on your reading journey.   #IndigenousVoices #CroakeyREAD 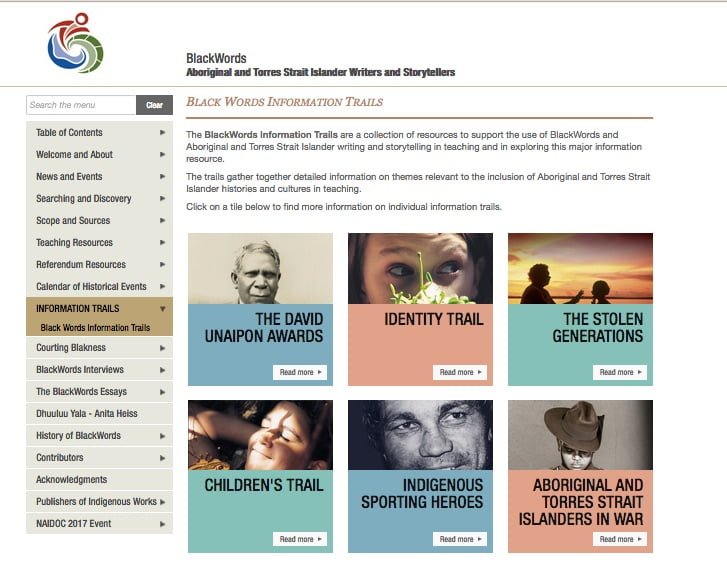 The moving memoir MAYBE TOMORROW by Boori Monty Pryor speaks of resilience, hope, and both pain and positivity. A storyteller, basketballer and gentleman, Boori’s story will touch you.  In fact, I need to read it again!  #CroakeyREAD 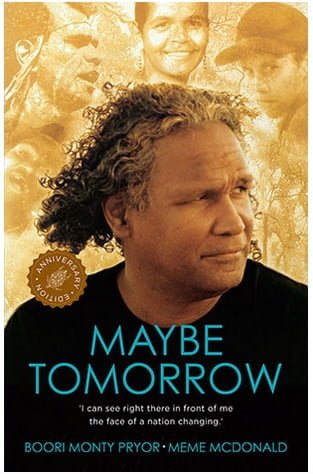 I think anthologies are a fantastic way to showcase many voices across genres, gender, geography and theme. Readers can dip in and out where they feel most comfort and interest. Everyone wins. Here’s a few that might pique your interest  @AustLit #CroakeyREAD

Marie McInerney sent out these tweets on behalf of Robyn Gaile:

Now some #CroakeyREAD tweets on behalf of my dear former colleague Robyn Gaile, an avid reader, who works at @AfdoOffice but couldn’t be online today. I knew her when she worked at @daruvic #disability

Robyn is legally blind. She has juvenile macular degeneration, a condition that affects central vision. This means that tasks like reading, seeing faces, and seeing detail is difficult. She describes her vision as “a little bit better than blurry blobs”.

Robyn uses a white cane to navigate her way around. She reads books in braille and electronic formats using a screen reader (JAWS) on her laptop. She reads the occasional iBook on her iPhone with voiceover: “It’s like having Siri read me a book”. 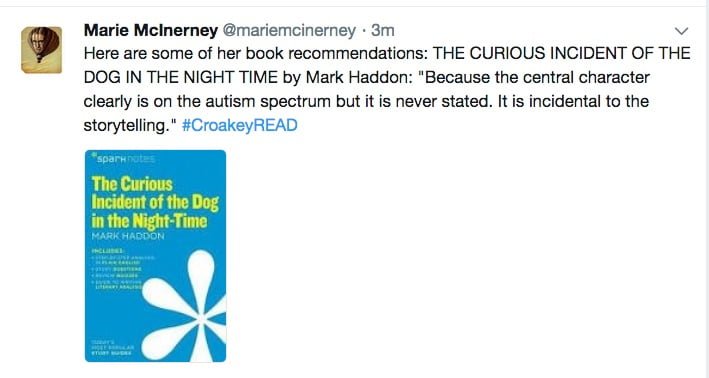 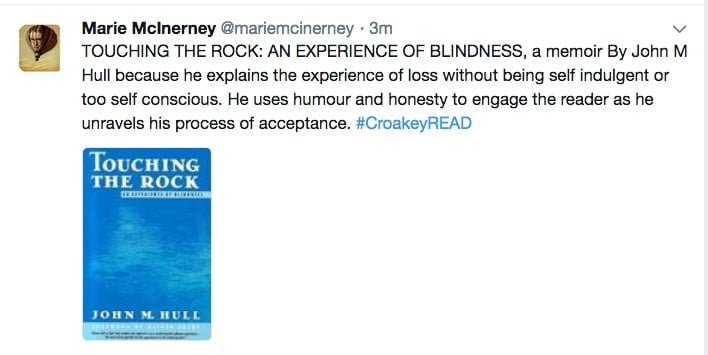 “It’s a picture book about dogs with rhyming couplet text below each picture….Each statement is a humorous statement about the dog but the subtext is a normalising statement about disability…

…It may seem unusual that a woman who is blind would recommend a picture book. I keep the book as a coffee table book and often have my house guests read it out to me and describe the pictures. It tickles my funny bone and always provokes conversation.”

On accessible reading: Robyn: “Publishers need to keep producing audio books unabridged. We audio book readers want to have the same experience of a story unfolding as print readers. ”

On accessible reading: Robyn: “Authors need to fully develop their characters who have a disability. They need to know that disability is only one aspect of a person’s life.”

Reflections on reading, writing and empathy 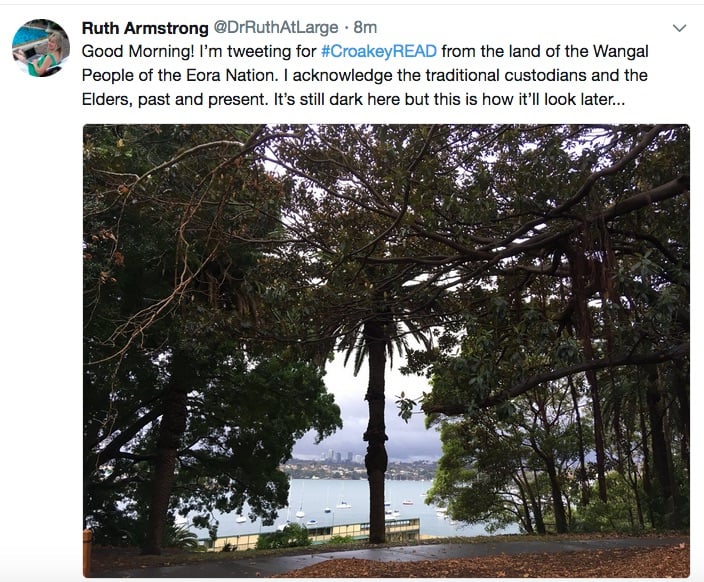 I’m a @CroakeyNews editor and a former medical journal editor. For the past two years I’ve been working towards an MA in Creative Writing at the University of Technology, Sydney, by reading and writing Australian short stories.

I write non-fiction more often than fiction and read widely professionally, but for my own pleasure and personal development, it’s all about stories, fiction and non-fiction. Reading and writing. I’m going to tweet about a few books and stories this morning. 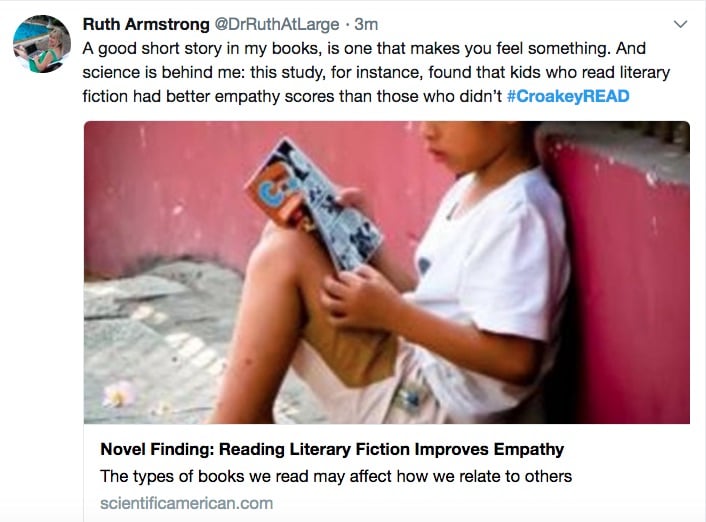 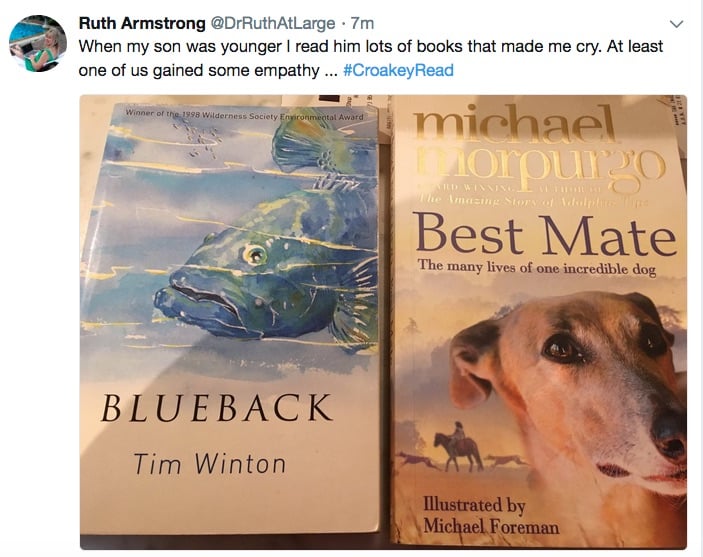 Just as an aside, it’s been worth doing the Creative Writing MA just to meet and read the stories of my fellow students. People carry some harrowing and intriguing and beautiful and insightful things through life. We should listen to each other’s stories. 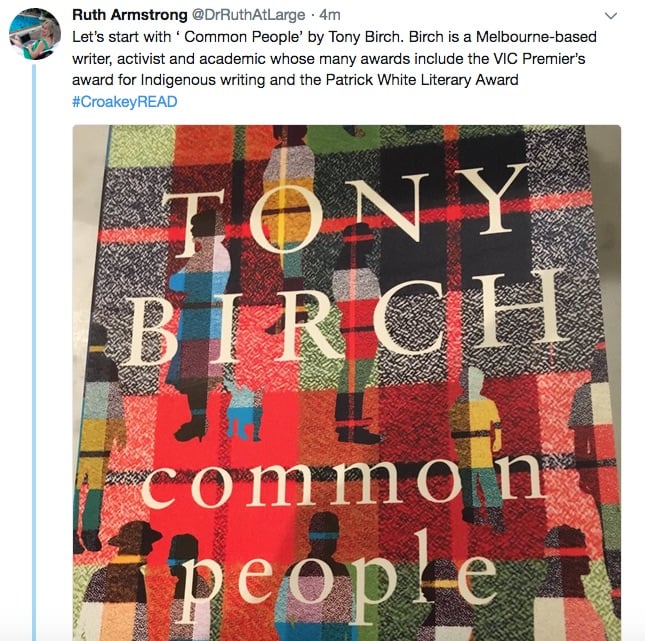 See a profile of Tony Birch by Jack Latimore.

Just a warning: Birch’s stories can be a bit salty – sweary even. He’s an economical writer with a great command of the vernacular. Some say they are bleak, but Birch denies that and I agree. At the heart of every story there is a spark of beauty and resilience – in every one.

Here’s a podcast of Tony Birch talking about Common People …”My writing is political in some senses but I never write stories with a political intention. I just have a natural ability to engage with people on the margins, whether real life or fictional.”

“I place them at the centre of the narrative so that we can … understand those lives in more depth… In order to make decisions about how we feel about the marginalised I think we need to know more about them.”

Common people contains stories about women who work the graveyard shift in the worst kind of meatworks, the homeless, the delinquent, those outcast and poor. They are their stories not other people’s stories about them. Race is rarely mentioned but it hovers in the background.

My favourite story in the book is called ‘Sissy’. It’s a wry story within a story about a little girl who is chosen to have a ‘holiday’ with a middle class family. Spoiler alert: Sissy has AGENCY. 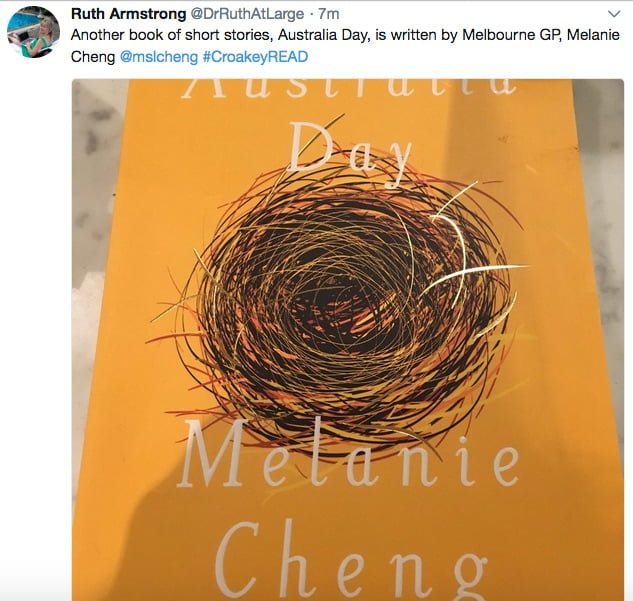 Here’s a podcast of @mslcheng talking about her book. She wrote the stories over 9 years, & describes how working as a GP has influenced her writing. There’s enough doctory stuff in here to keep doctor readers happy but it’s a much broader book than that.

When it comes to short story collections I often pick & choose, but it’s a testament to the quality of the stories and the editing that I read all of these – in order. They are observant, relatable and to-the-minute contemporary. And diverse without being self conscious about it.

Here’s a link to a good review … The title story is wonderful but my favourite is ‘Macca,’ a beautifully crafted story about a young GP’s relationship with a man she is treating for addiction.

The book is well named. Cheng captures some of the complexities of contemporary identity without ever being heavy handed. Dip in or read it all in one go. 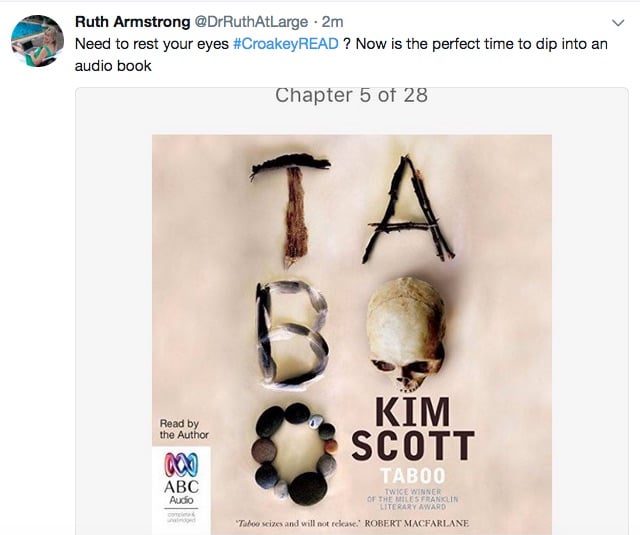 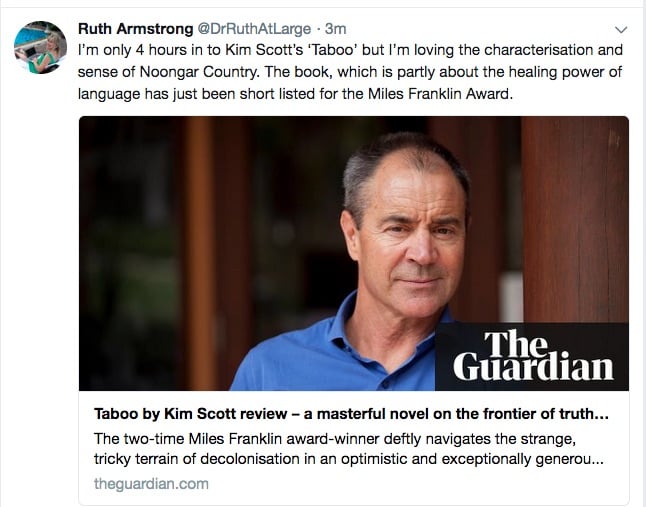 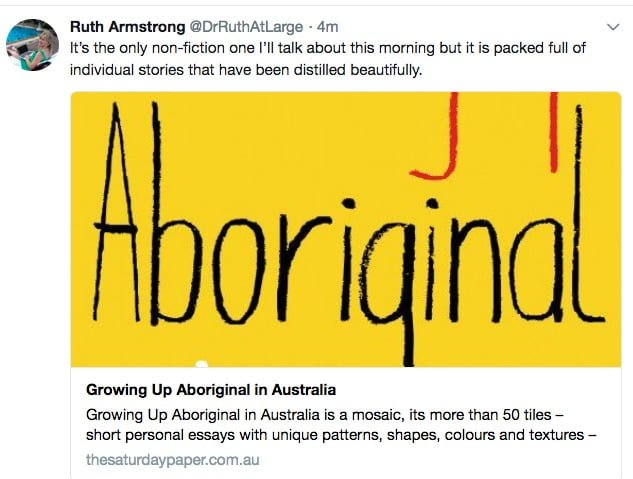 There’s a great mix of contributors – young and old, literary, artistic and sporting figures as well as names you won’t recognise.

There are stories about being too black, too white, about family connections and, often, about identity denied and later embraced. Many of the stories are anchored in recent history, so it’s easy to think, ‘I was there then’. A book to dip into, and think deeply about. 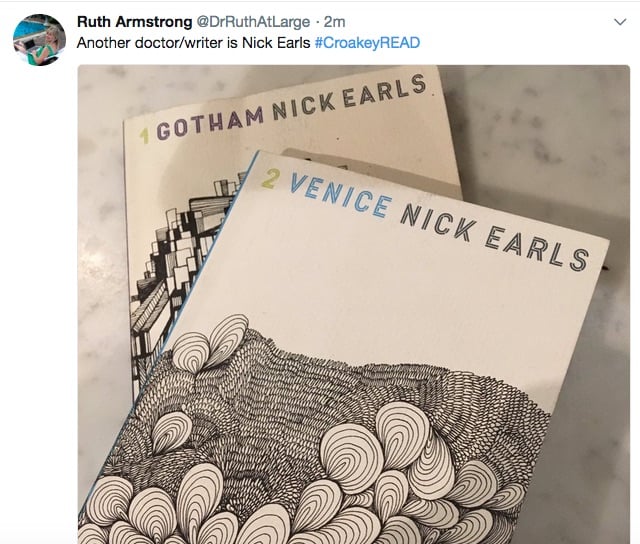 I’ve followed @nickearls ’ writing for years but this Wisdom Tree series of five novellas is really something extraordinary. The books are tangentially linked but each one gently places us in a different, challenging situation: in Gotham it’s a sick child and in Venice it’s redundancy and displacement. My favourite is Juneau, a father and son relationship story. 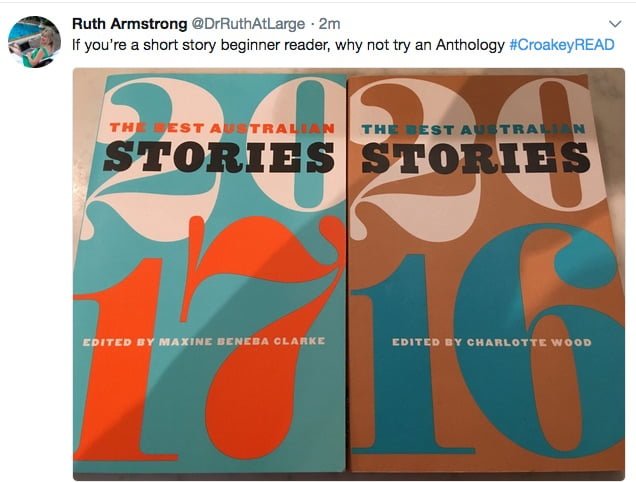 Anthologies are a great source of short stories. In #bestaustralianstories 16 I found Jennifer Down’s story of a marriage marred by illness in ‘Alpine Road’, and in ’17 it was Julie Koh’s ‘TheWall,’ that captured my imagination.

I can’t believe an hour has passed! Hope I’ve given you some reading to go on with. If you’d like to read one of my short stories, follow this link to ‘Paper Cranes’. 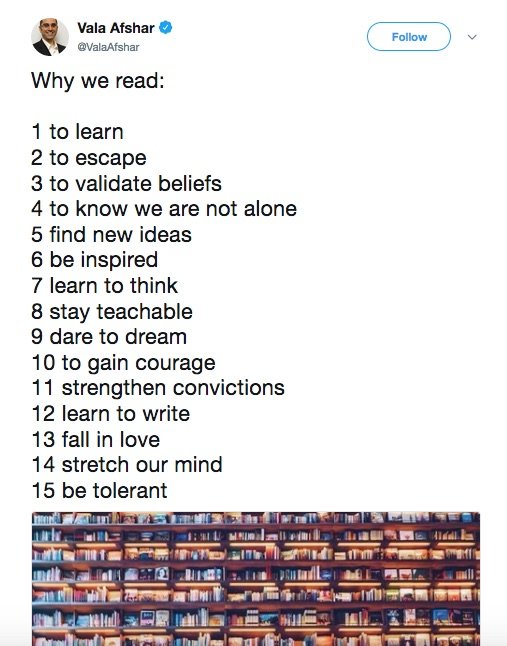