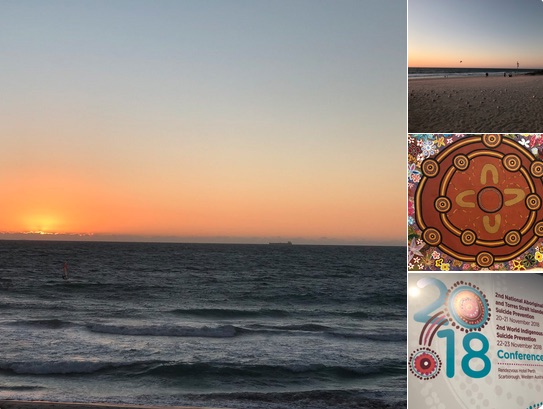 Reclaiming and rebuilding stories of strength and resilience – #ATSISPC18

The importance of safe, strengths-based narratives that enable families and communities to heal from the traumas of colonisation was highlighted repeatedly at recent Indigenous suicide prevention conferences in Perth.

The conferences also heard about suicide prevention efforts arising out of Canada’s adoption of Jordan’s Principle, which aims to makes sure all First Nations children can access products, services and supports for a wide range of a health, social and educational needs, when they need them.

Jordan’s Principle is named in memory of Jordan River Anderson, a young boy from Norway House Cree Nation in Manitoba, who died in hospital while state and federal authorities argued over who was responsible for his care.

One of the most important roles of the Royal Commission into Institutional Responses to Child Sexual Abuse was in allowing people who had experienced great harm to tell their stories – and, importantly, to do so in a safe way, according to psychiatrist Professor Helen Milroy.

“I don’t think prior to this we understood the true magnitude.”

Milroy, a psychiatrist and descendant of the Palyku people of the Pilbara region, was a Commissioner of the Royal Commission into Institutional Responses to Child Sexual Abuse.

While 15 per cent of survivors who gave testimony to the Royal Commission were Aboriginal and Torres Strait Islander people, she told delegates that Australia has not provided “truth telling” in the way that Canada’s Truth and Reconciliation Commission did in its landmark investigation into First Nations, Inuit and Metis children taken to Indian Residential Schools.

“Unfortunately in Australia we have had Reconciliation without Truth,” she said.

But now, she said, it is also time for new stories that focus on the strength of Aboriginal and Torres Strait Islander families, not always on the trauma and dislocation of colonisation and the Stolen Generations policies.

It is also time she said for services and policies to rebuild those strengths in people who might struggle as a result of previous harm.

“We need to reclaim our stories and rebuild new stories of healthy families and communities going forward,” she said.

“We have to reclaim that space. That’s how our children in these missions survived, you could take them away from country and culture but not from spirit.”

Shifting the narrative from deficit to strength to address high rates of suicide, particularly among young people, was a call echoed by many others at the conferences.

Professor Dawn Bessarab from the Poche Centre for Indigenous Health at the University of Western Australia urged greater Indigenous control and ownership of data as a vital tool for suicide prevention, particularly for young people.

For a long time when colonisation first came, they said Aboriginal people were a ‘dying race’, we were on the way out.

The statistics are still saying that, but we’re not dying out.

Yes, our mortality rate is higher but we are also thriving, and until we change the narrative for young people, they’re going to believe it.”

Milroy said the Royal Commission aimed to set up a process where a person’s story was able to “come to the surface in a safe way”.

This was done for two reasons: to avoid re-traumatising people or keeping them “trapped” in the story of harm; and also to investigate how that person used their own strengths to overcome the harm of abuse and neglect.

She said this was a lesson also to be learnt in mental health services, where the purpose of coming for an assessment is often framed as a deficit, where the question is ‘what’s wrong with you?’ instead of ‘what’s happened to you?’.

The Royal Commission asked many survivors what helped them get through, and heard some common themes.

These included having a safe person to talk to, having an enduring and safe relationship – with a family or community member – throughout life, and being able to excel at something, perhaps school or sport.

“It was different for different people but people found their own way through,” Milroy said.

“Certainly family and relationships came through as some of the strongest factors that helped people survive.”

Milroy said early intervention is the key – not only to address trauma in young people before it manifests in crisis behaviour in adolescence, but also for families who need support to be able to stay together.

“We are still seeing children in foster care with 50 placements!” she said. “That’s not going to help in their development.” 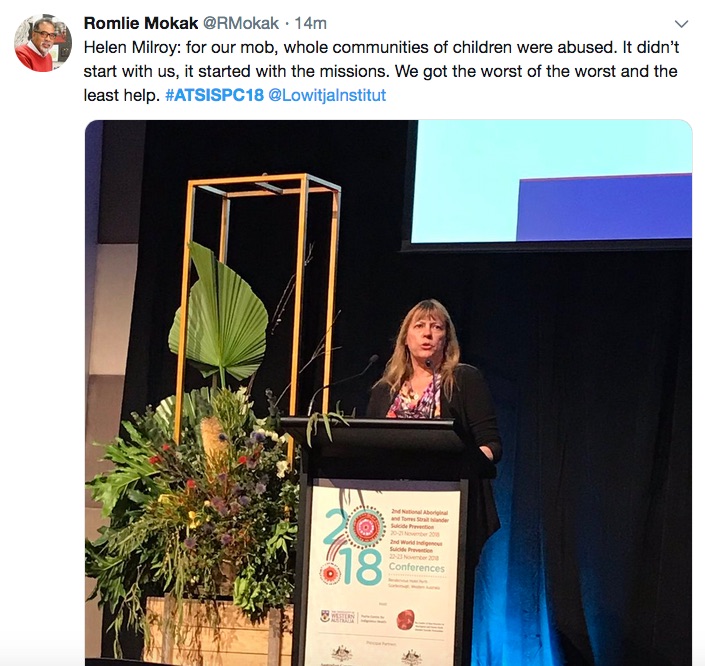 Meanwhile, conference delegates also heard about a promising suicide prevention program in Canada that takes Nishnawbe Aski Nation children back up to their traditional lands, to restore connections to culture and country.

Anna Betty Achneepineskum, NAN Deputy Grand Chief, told delegates that Choose Life was developed through Jordan’s Principle, which aims to resolve jurisdictional disputes within, and between, provincial/territorial and federal governments concerning payment for services to First Nations children when the service is available to all other children.

It is named in memory of Jordan River Anderson, a young boy from the Norway House Cree Nation in Manitoba who spent two years unnecessarily in a hospital because the Federal Government and province of Manitoba fought over who was responsible to help him be treated at home.

“This little boy died in the hospital,” Achneepineskum said.

As this article explained, the reason for the dispute was that the province normally delivers health care off-reserve, but the federal government funds it on-reserve.

Talking about how long and far her delegation had travelled from northern Ontario to be at the conference in Perth, Achneepineskum said she had been struck by the shared suicide experiences of Indigenous peoples that emerged at the conference.

“Our people have followed the same legacy, the same traumas, and other harms that have been caused when our lands were invaded,” she said. “The practices, the ceremonies and our laws and languages were taken and outlawed.”

The Choose Life program seeks to address those issues – “the disempowerment of our people and the burden of the losses we have suffered through our history”.

Her community has suffered “grave losses” through suicide, with much of the burden on children. Of 573 deaths by suicide since 1986, 89 were children aged 10-14 years. Last year the community held funerals just days apart for two 12 year old girls, who were best friends.

But she said the community was beginning to witness “great things happening” with the Choose Life program, which is designed and owned by community, although faces an uncertain funding future.

Choose Life takes Nishnawbe Aski Nation children back up to their traditional lands, to restore connections lost when families were displaced into small reserves and children taken from family and culture into Canada’s infamous Indian Residential Schools.

“Our Choose Life program brings those teachings back for those people, going out on land and spending time with their elders,” Achneepineskum said.

“You can see in their faces how great they feel, how wanted they feel and how loved they feel, and that is what makes our Choose Life program so successful.” 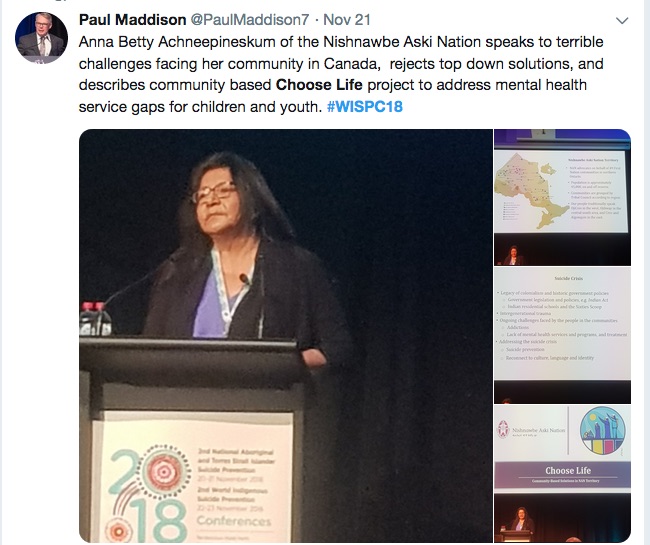 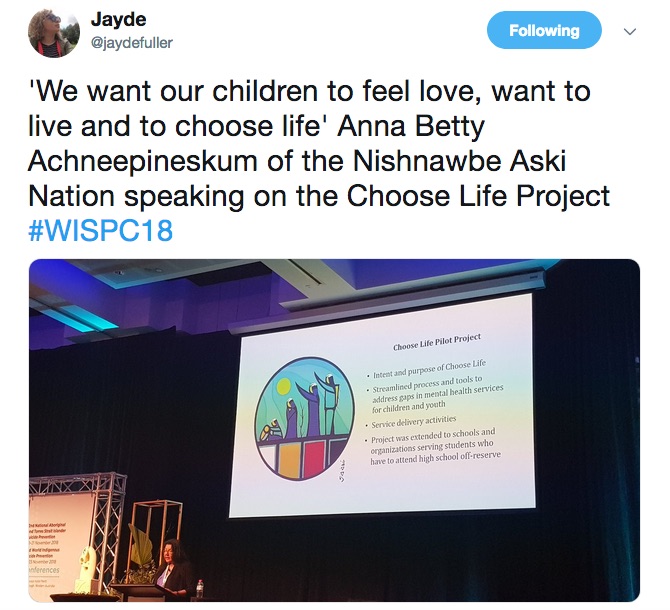 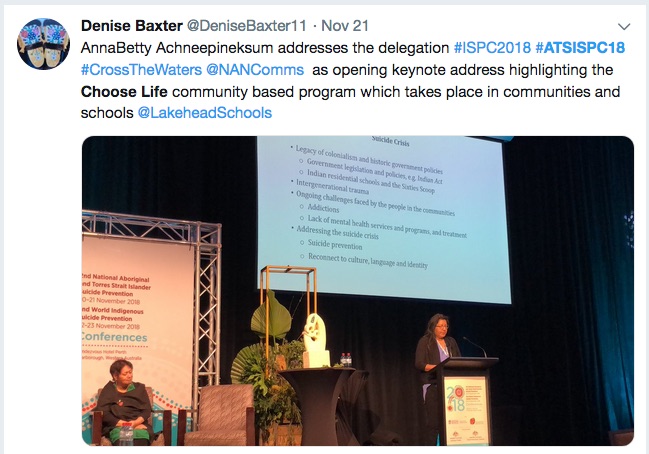 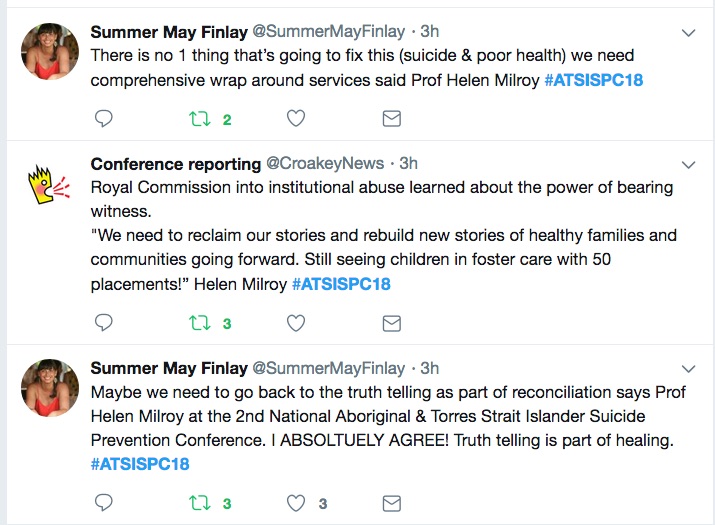 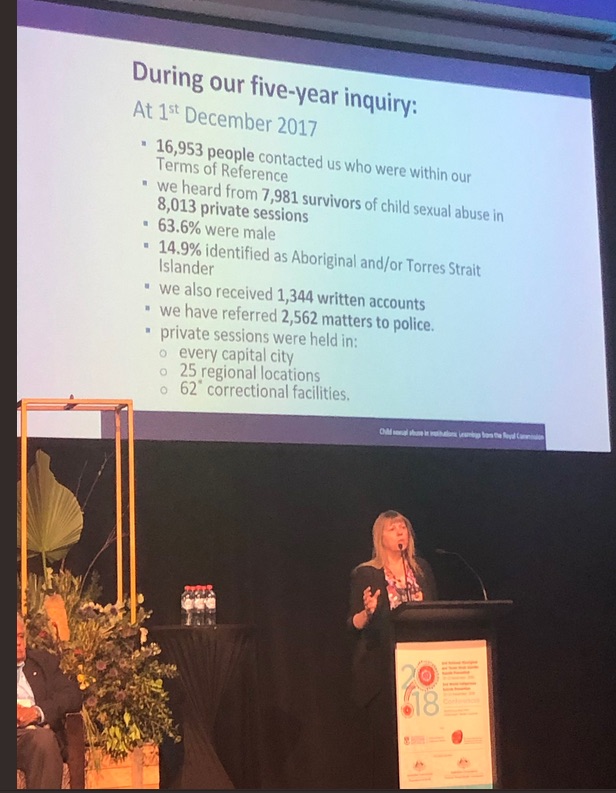 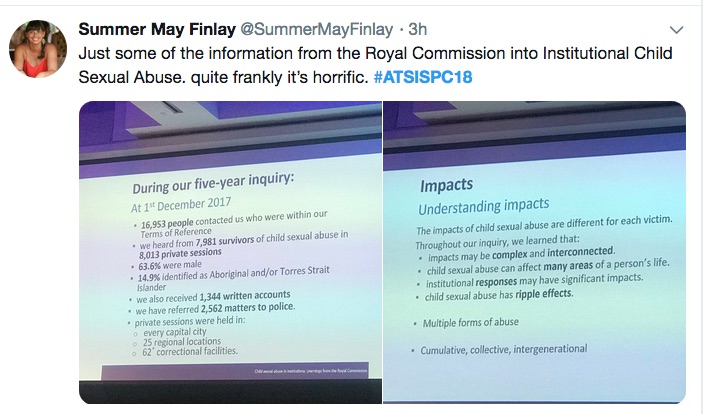 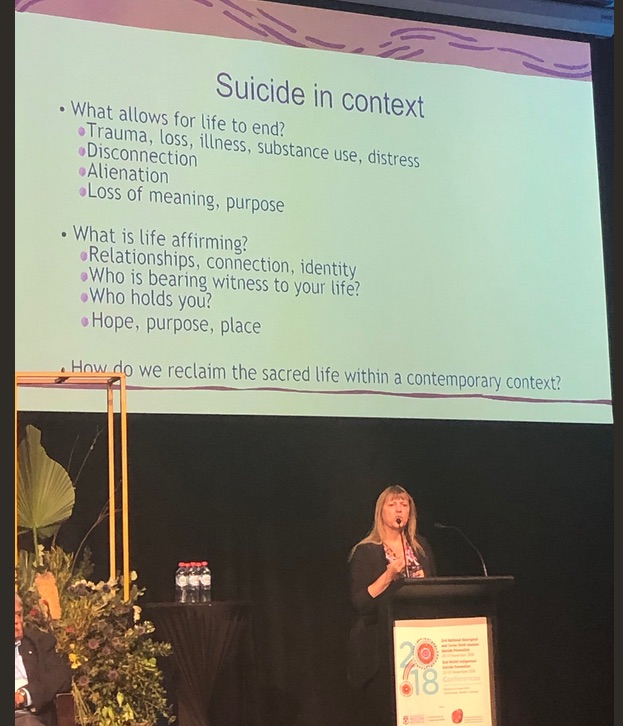 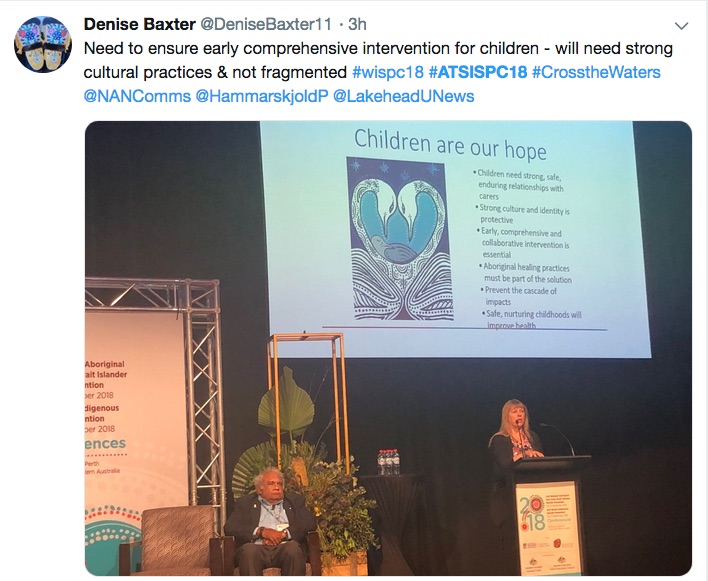 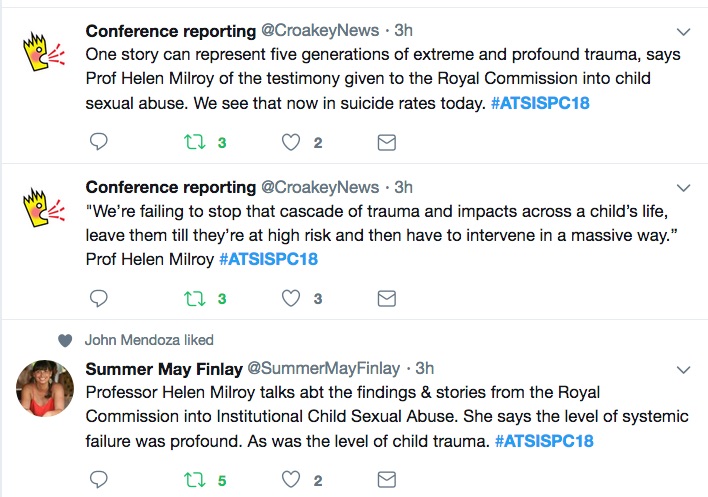 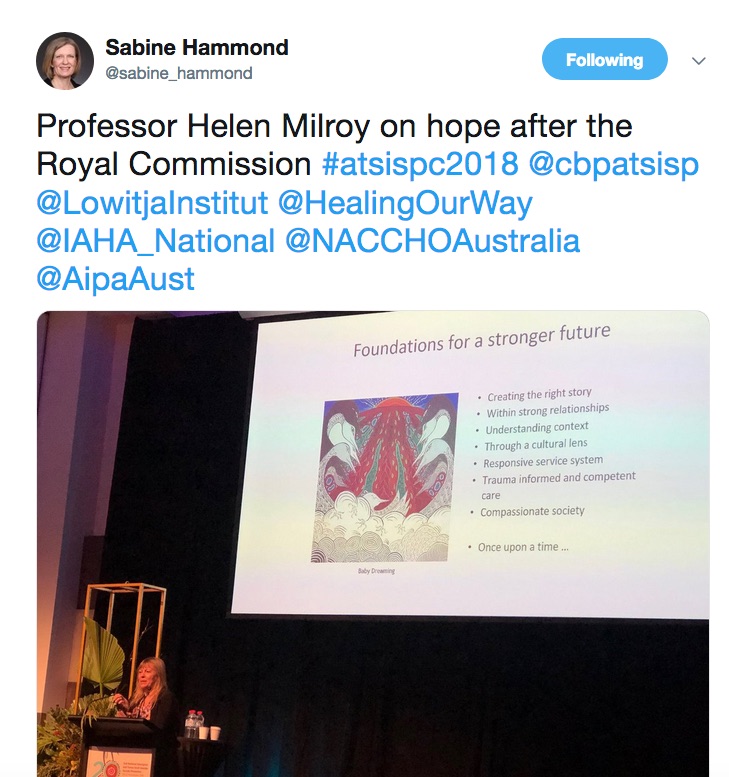 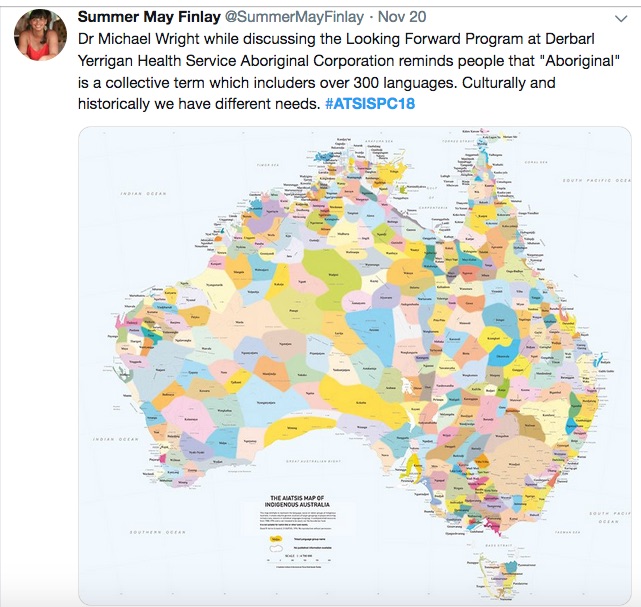 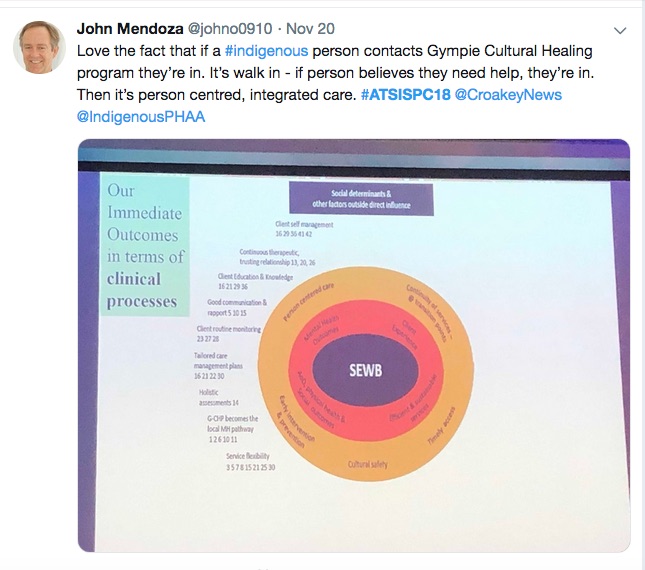 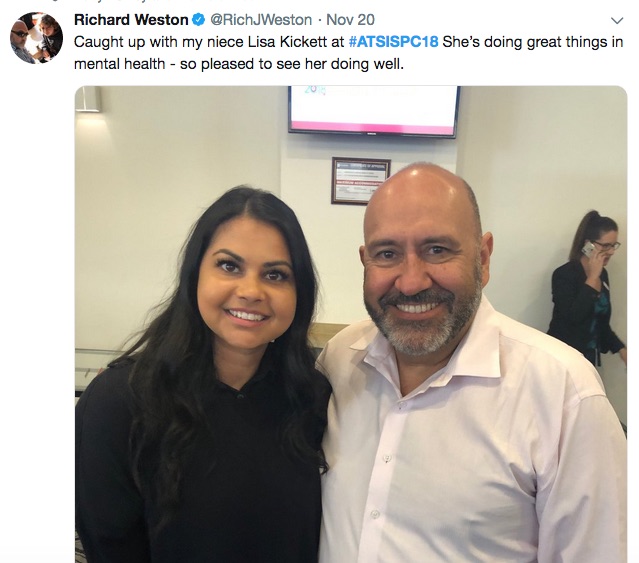 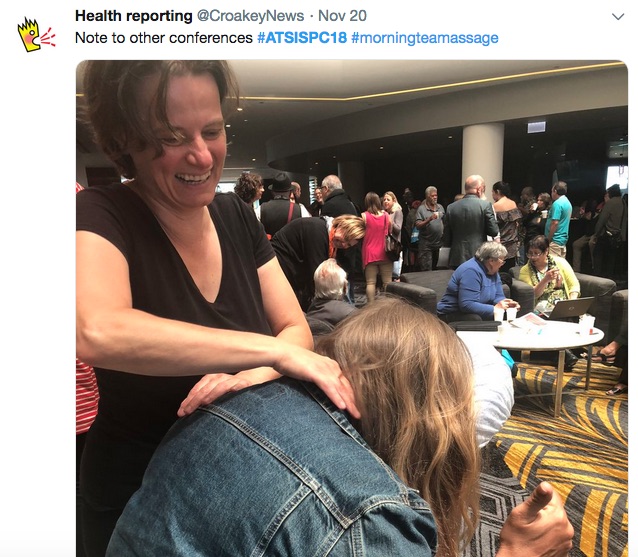 Professor Pat Dudgeon is from the Bardi people of the Kimberley area in Western Australia, and the Poche Research Fellow at the Centre of Best Practice in Aboriginal & Torres Strait Islander Suicide Prevention (CBPATSISP) at the University of Western Australia.

Dudgeon convened both conference and talks here about the main aims and takeaways from four days of intense conversations and presentations.

Among her personal highlights was having a healing team available to delegates throughout the conferences, which included clinical and community psychologists, traditional healers, youth counsellors and other mental health professionals – a team that might not have been able to be put together just ten years ago.

• This is the final Croakey Conference News Service report from the #ATSISPC18 and #WISPC18 conferences.

In the week following the conferences, Summer May Finlay guest tweeted for @WePublicHealth on behalf of the Centre of Best Practice in Aboriginal and Torres Strait Islander Suicide Prevention.

She shared reflections from the conferences, as well as findings from a Senate inquiry, Accessibility and quality of mental health services in rural and remote Australia. 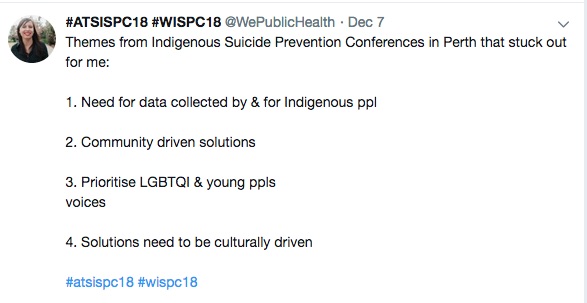 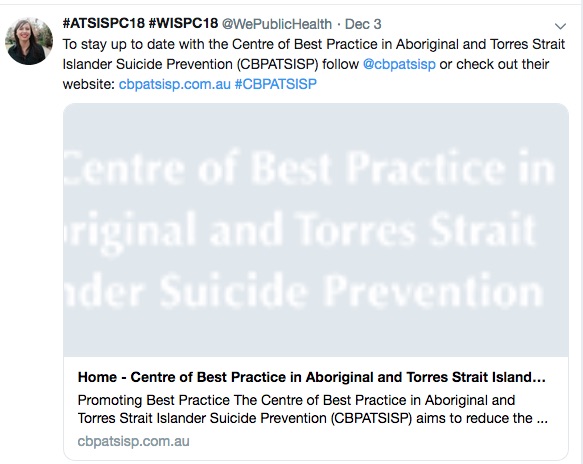 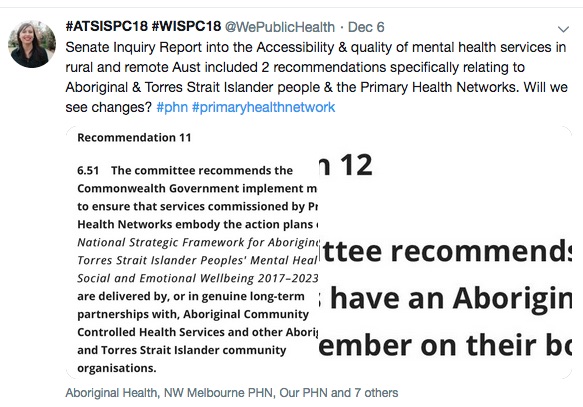 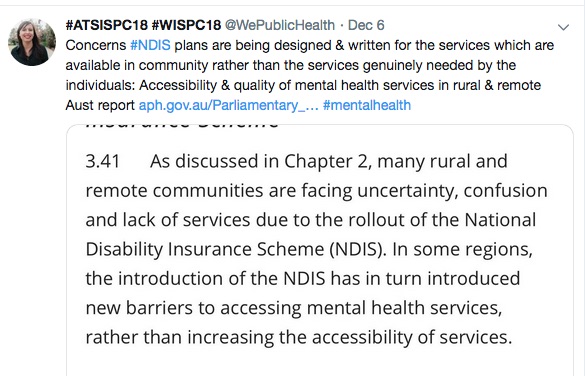 Watch 25 videos from the conference at the #ATSISPC18 playlist. Not all of the videos were broadcast via Periscope. For those that were broadcast, by 4 December 2018, there had been 3,318 viewers (2,296 for interviews and 1,022 for presentations/ceremony events).

Symplur analytics for the period of Croakey’s coverage of the conference (17 November-14 December) show there were more than 31 million Twitter impressions of the hashtag, 4,386 tweets, and 779 participants using the hashtag. Read the Twitter transcript here. 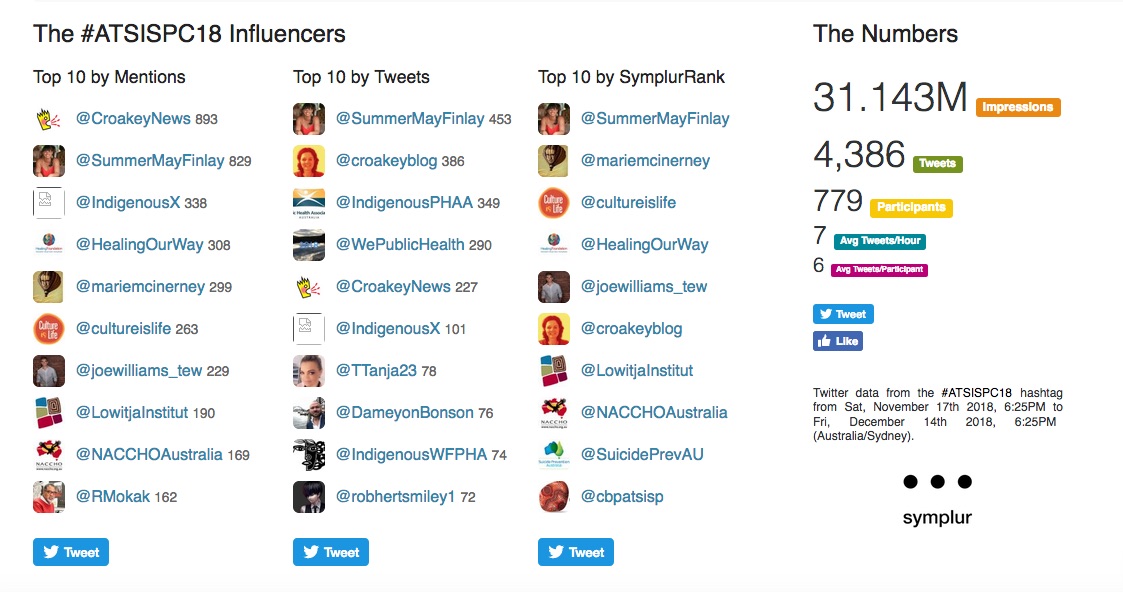 As the grabs below show, the conference hashtag trended nationally and also in Perth. 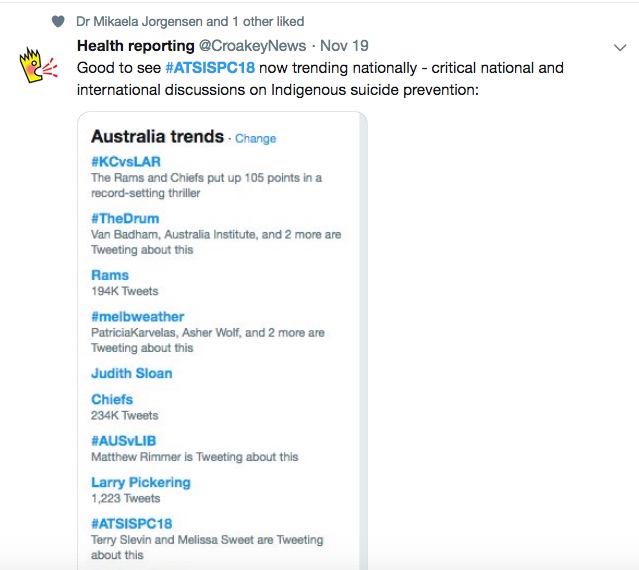 • Bookmark this link for coverage of #ATSISPC18.