In the aftermath of Angelina Jolie’s recent disclosure about having had a preventive double mastectomy, there have been several thoughtful articles that are worth reading, including the piece below from Hilda Bastian, first published at Scientific American blogs.

(And there are more links below her piece).

It was a singular act of courage for Angelina Jolie to so openly reveal her fears and preventive double mastectomy. She just amazes, again and again.

Along with admiration and sympathy for her, many will be hoping that this extends to greater understanding of others in much the same boat as Jolie.

All sorts of reactions were swift, sometimes including expectations that this would save lives and raise awareness, too. Maybe it will. That would be great. And I hope we can take for granted that understanding and sympathy will spread.

But we can’t assume these bursts of attention to the health issues affecting famous people inherently and inevitably translate into health benefits.

Kylie Minogue’s breast cancer diagnosis, for example, led to a change in screening behavior – but not necessarily among those who could have benefited. And like “the Couric effect” on colonoscopies, “the Minogue effect” didn’t last.

Anything powerful enough to have a positive effect usually also has the potential to have unintended adverse ones, as well. Consider what it means when people not at high risk decide to go for screening.

The National Cancer Institute (NCI) estimates that perhaps more than half of all breast cancer diagnoses are over-diagnoses.

That means that breast cancer would never cause illness or suffering. The diagnosis itself and treatments that follow may well cause a lot of suffering, though. Peggy Orenstein recently wrote movingly about that in the NY Times recently.

Jolie wrote a carefully worded piece, but much of that care might get lost in the wave that follows this cultural tremor.

Her situation is one that anyone would need great courage to face. But the situation is, fortunately, rare. Having a relative with breast cancer isn’t rare though, so the potential for fear of risks to be spread by others is high.

Preventive double mastectomy – or bilateral prophylactic mastectomy – has dramatic benefits in women with the specific genetic mutation Jolie describes. But not necessarily for other women.

Less than 1% of American women are in the same boat as Jolie. But how can we be confident that we’ll all be able to keep this, and what could be done about it, in perspective? Even physicians may not have an admirable grasp of risk statistics.

We all need to get better at putting risks in perspective, because dramatic numbers get misapplied in the public arena.

As Kelly-Anne Phillips and colleagues wrote in the New England Journal of Medicine years ago, the scariest possible numbers can get used in breast cancer stories – often that’s the lifetime risk of getting a breast cancer diagnosis in women who lived to be old without dying of anything else.

Our risk of being diagnosed with breast cancer really depends on our age. It accumulates as we get old and survive other more common reasons for dying young. At any age, the average adult woman is more likely to die of something else than breast cancer. Over 40,000 women (in the US) die of breast cancer every year: but over 290,000 women die of heart disease every year, for example.

People still argue that we need much more awareness and attention to breast cancer across the board. Many people do still under-estimate their risks, and knowledge isn’t evenly spread either.

However, substantial parts of our communities are now fearful out of proportion to their actual risk. So we might need to re-think a few things.

Women who have had cancer in one breast often over-estimate the risk of cancer in their other breast. Many women who have had a preventive double mastectomy, without having the kind of gene mutation that Jolie has, don’t necessarily have an accurate idea of their actual risk.

The shadow of cancer angst is spreading in our communities, and we need to improve our basic skills in understanding statistics on key issues like those explained in this blog post and this online book. Losing perspective and becoming too fearful – as an individual and as a society – has downsides.

Understanding and the courage to tolerate risk and uncertainty are necessary for a good life.

Perhaps it’s harder to achieve that when we’re being constantly bombarded with more things of which we could be fearful.

Risk awareness can go too far and start to do damage: unexpected responses to excess fear, and through the adverse effects of unnecessary tests and treatments.

• This article was first published by Scientific American blogs 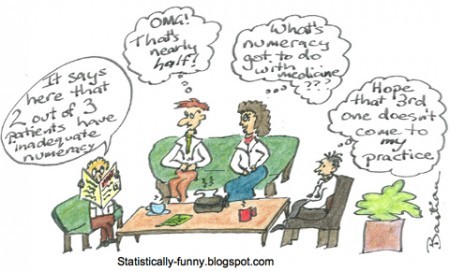 Hilda Bastian’s interest in effective healthcare and effective communications is complemented by an interest in cartooning. See more of her work at Statistically Funny.

• Gary Schwitzer shares some of the perspectives of women with breast cancer who are active on social media.

• At the Reporting on Health blog at the University of Southern California, Jill Braden Balderas also looks at some of complexities.

• At Science-ish, there is some evidence-based analysis from Julia Belluz

• The Conversation ran a series of articles.

If you’ve come across related articles that are worth sharing on this subject, please feel free to leave the details and links below. Thanks.

Growing calls for political leaders to act on the evidence, to improve COVID control

Yuwinbir – this way! Going beyond meeting points between Indigenous knowledges and health sociology