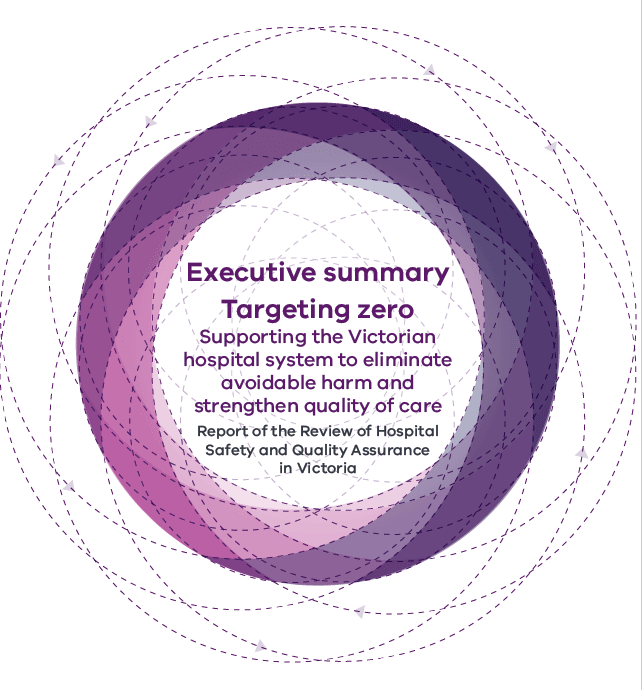 Image from the Review of Hospital Safety and Quality Assurance in Victoria, led by Stephen Duckett

However  Susan Biggar, senior manager at Melbourne’s Health Issues Centre, said those reforms should not overlook the powerful benefits to patient safety from involving patients and their families in making health care safer.

When the moment arrives that we need a hospital, we all want to know we will be safe. Unfortunately, that was not the case for 11 babies who tragically died at the Bacchus Marsh hospital. Following the stillbirths and potentially avoidable deaths, internal and external reviews were instigated into Djerriwarrh Health Services.

The reviews pointed fingers not only at the hospital, but also at the Victorian Health Department’s capacity to detect and manage poor clinical performance in its devolved governance system. Last week’s release of the long-awaited review led by Grattan Institute health director and former health bureaucrat Stephen Duckett, has highlighted similar issues.

The Duckett Report has recommended revamping the department, and taking a closer look at the role of boards, hospital accountability and clinician engagement. But the report has overlooked one widely recognised source of improvement: involving patients and their families in making health care safer.

Health care leaders worldwide have suggested that giving patients a greater role in their care and in the design and monitoring of health systems would greatly improve patient safety. Despite such support for the voice of patients to be respected at the bedside and represented at decision-making tables, progress in this critically important – and some might say obvious – area continues to drag.

Patients are right to be concerned about their safety in hospitals. Statistics show that one in 10 people admitted to hospital in Australia will suffer an adverse event (unwanted harmful outcome). While most incidents result in minor, short-term health effects, evidence suggests that about 1 per cent of patients die or suffer permanent disability as a result of a hospital stay. This represents a far higher risk than we would ever accept when boarding a plane or hopping in our car, where our chance of dying is estimated, respectively, at one in 11 million and one in 5,000.  Furthermore, patients are still harmed at about the same rate they were 30 years ago, even though hospitals have built increasingly sophisticated systems and safeguards for tracking and improving the safety of care, and state and federal governments have introduced numerous initiatives to tackle the problem of medical error.  Clearly a new approach is required.

Unfortunately the tragedy at the Djerriwarrh Health Services hospital, which has left a number of families bereft and traumatised, has shaken the public’s confidence in our health services and in our government’s ability to monitor and manage them. The Duckett Report’s harsh assessment of the Victorian Department of Health and Human Services, following on the heels of a similarly unforgiving review by the auditor general earlier this year, is a clarion call for fresh thinking about patient safety.

Involving patients in their care is a cost-effective approach. Evidence is growing that involved patients are safer. A 2011 study of more than 2,000 patients at a US hospital compared levels of individual involvement in care and decision-making with experience of adverse events. It found that those who actively participated in their care were half as likely to suffer an adverse event. It may also be that patients are safer with a friend or family member at their bedside; meaning a decision to ‘plus-one’ when you go to hospital might be life-saving.

Recently the Health Issues Centre, in the context of the tragedy at Bacchus Marsh hospital, consulted with a small group of health care users (in person and via a survey) what would make care safer. Like many other consumers before them, they said: empower patients and families to speak up and encourage the health system to listen. They noted that speaking up is particularly daunting when things are going badly, such as when their health is deteriorating. They also fear their care may be compromised by being seen as ‘difficult’.

A person centred approach to health care, which calls for patients and their families to be involved at the level they choose, is increasingly seen by experts as integral to high quality, safe care. But its roll-out is patchy across Victoria, with some hospitals embracing it and others reluctant to change. While the Duckett Report pushes for legislative changes and an important governance rejig, involving patients through a person centred approach is relatively inexpensive to implement and is a lasting solution. For example, several Victorian hospitals have initiated programs encouraging families to raise the alarm, escalating care through a rapid response team, when they have concerns that their loved one’s condition is deteriorating.

Furthermore, many patients are no longer content to just speak up about their own treatment. They believe their knowledge can and should influence the way health care is designed. The health sector has been slow to welcome patients and families into its inner sanctums of decision-making, citing lack of expertise and potential bias. But community expectations about transparency and nclusion will only get stronger. It’s time to stop apologising to patients and families for safety failures and instead start wholeheartedly involving them in building a safer system for everyone.

Susan Biggar is a writer and senior manager at Health Issues Centre, which aims to support and inform consumers and the health sector to partner for health care improvement.