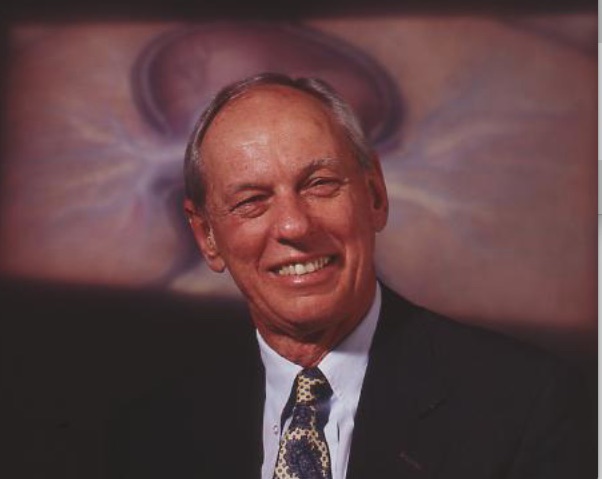 It’s hard to pick just a few highlights from the tributes to the remarkable life of pioneering tobacco control advocate and expert Dr Nigel Gray that were presented at last week’s 2015 Oceania Tobacco Control Conference.

The eulogies, by his long-standing colleagues Professors David Hill and Mike Daube, provided fascinating historical insights into the practice and the politics of research and advocacy.

Below are some of the stories told at the conference about a long and momentous life, starting first with the irresistible quote via Daube from the tobacco industry itself about Gray’s role and influence, according to an internal Phillip Morris company document:

It is the Australian, Dr Gray, who appears to have done more than any other individual to bring the anti-tobacco movement together in an international sense, to exert pressure on governments and other influential bodies.

Nigel deserves to be remembered and revered as the father of tobacco control globally as well as in Australia. He developed the policies that are still today the core for all tobacco control, and for decades was the single most important figure in developing action internationally.

“All public health is politics”

Professor David Hill, Professorial Fellow at the University of Melbourne in both the School of Population and Global Health and the School of Psychological Sciences, said it was his good fortune to work with Gray for 27 years.

Gray arrived in 1968 at the then Anti-Cancer Council of Victoria (ACCV) from his previous job as Assistant Medical Director of the Royal Children’s Hospital. Hill said:

I recall how rapidly his thoughtful analysis of the cancer scene identified tobacco as the pre-eminent target, and how he saw that public information alone would never solve the problem.

I don’t recall him actually using infectious disease terms such as ‘vector’ at that time but his way of thinking showed that he knew the tobacco industry was the dangerous vector that had to be dealt with.

So, the story of Nigel Gray versus Big Tobacco began.

It’s remarkable to consider how far we have come from then, when an ACCV study found that evening TV viewers in Melbourne in the late 1960s saw a cigarette ad every 12 minutes.

Instead of tedious formalities such as working through actors’ agents, I remember sitting in his office when he picked up the phone; dialled the hotel where Warren Mitchell (the British actor also known as Alf Garnett) was known to be staying; was miraculously put through to his room, where Warren miraculously picked up. “Hello, I’m Nigel Gray. You don’t know me. I’m ringing because…(then followed a potent Gravian charm offensive).

See two of the highlights of the campaign here: “Alf’s cough” and “Cancer Country”.

Interestingly, Hill says the ads were not intended to make smokers quit: the target audience was the 120 or so members of the House of Representations with the aim to get federal parliament to legislate against TV and radio advertising of tobacco.

Among the satirical array of anti-ads there was “a serious hand grenade”: Gray’s idea to have a straight-faced appeal by Nobel Laureate in medicine Sir Macfarlane Burnet calling for cigarette advertising to be banned because it recruited teenagers into a deadly addiction. Hill said:

When Melbourne TV stations declined to accept bookings of the anti-ads on the grounds they ‘knocked copy’, that is to say denigrated another client’s product, the stations in effect banned a Nobel Laureate from speaking out in the interests of our children’s health.

This outrage then became the story. It ran for days until the stations capitulated and our campaign went to air.

The campaign kick-started public and parliamentary debate, which within three years saw the Whitlam Government legislate to phase out TV and radio advertising of tobacco in stages over three years.

Research the ‘potent tool of the trade’

Hill said the commitment of the tobacco control sector to the collection over time of sound data on smoking prevalence has been “a potent tool of the trade”. Other speakers at the conference agreed, urging “vigilance” to protect it.

Gray was the lead author of the first scientific paper on Australian smoking prevalence reported in the Medical Journal of Australia from a national sample survey done in 1974.

That and subsequent surveys were commissioned from the same market research company that sold its services to the tobacco industry, “a fact which could be turned to strategic advantage in neutralising industry criticism of the accuracy of the prevalence estimates”.

Hill said the other great big-data resource has been the tobacco consumption records arising from the collection of federal excise duty.

He said excellent use has been made of these data by very able Australian researchers, who have quantified the relationships between price and consumption in the context of other interventions that also put downward pressure on smoking rates.

“This has enabled arguments in favour of tobacco control measures to be (almost literally) sugar-coated with revenue raising prospects for governments.”

Hill said not all potential benefits of research were taken up, and he regretted examples where “simple, cheap, and effective interventions are not implemented because to do so disturbs spurious bureaucratic or system obstacles”, such as this research into changes to hospital forms used to collect data before admission.

There were also things “we did, but shouldn’t have”, he said, highlighting “a very early mistake” by Gray, himself and others to “pursue that illusory safe (or at least less dangerous) cigarette” – not knowing that smokers can get just as much nicotine and tar from a low tar cigarette by sucking harder or more frequently.

We had naively gifted to the tobacco industry a new market segment, which it disdainfully referred to as the ‘hypochondriac’ market.

There are moments in public health when the precautionary principle – acting judiciously in the absence of all the evidence you might like to have – should be applied.

But mostly it is dangerous to hasten before evidence exploring all the possibilities has been collected. We should have paused to do naturalistic studies of how smokers actually used these low tar variants. We would have discovered, as the industry already had, the flawed logic in promoting low tar cigarettes.

That parable may have present-day relevance, as we consider the advent of the e-cigarette.

Many have written and spoken of Gray’s pivotal role in the pace-setting Victorian Tobacco Act 1986, which Hill said was “arguably the most significant piece of state tobacco control legislation ever enacted in Australia”.

The Act levied a state licence fee on tobacco retailers, some of which went to fund the new Victorian Health Promotion Foundation (VicHealth) to spend on health promotion, particularly but not exclusively on tobacco control. It also provided funds to sport and the arts to effectively buy out the tobacco companies that had been so heavily funding them.

Hill provided insights into the process, saying the planning and passing of the Bill is “a wonderful tale not only of clear-sighted strategising but also of luck, opportunism, inventiveness, intrigue, surprise – even religion!” 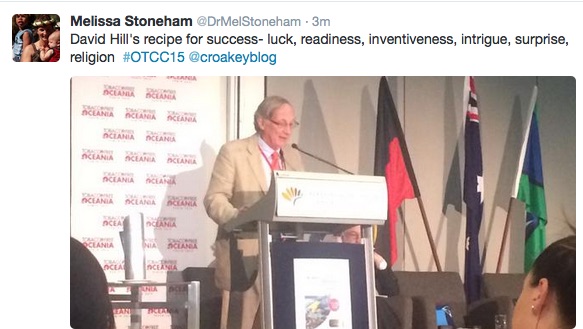 Perhaps most intriguingly it includes how the Shadow Health Minister not only backed the plans, but kept them confidential. See an edited run down from Hill below:

On the international stage

Nigel Gray retired as Director of the Anti-Cancer Council in 1996, after having led the organisation for 24 years. He took up part-year positions in Italy and France, which allowed him to write and speak extensively at international conferences for a decade. He served on the WHO Committee on tobacco regulation.

Mike Daube worked closely with him in those early years, when he was Director of Action on Smoking and Health in the UK.

It is hard to appreciate now how difficult tobacco control work was then at the national level, let alone internationally, how minute the resources were, how little support there was, how powerful (and respectable) the industry was, quite simply how few people there were working in the area – with even fewer actually wanting to DO anything at the policy level, and how tough things could be personally for those of us working on tobacco control as a public health issue.

In retrospect, what we did was done with amazing nerve. We would waltz into countries, demand ahead of time that Cancer Councils and other groups provided support – which amazingly they did, bring people together, arrange site visits, organise regional workshops, demand – and get – plenary sessions on tobacco at cancer and other conferences where prevention had never previously been on the agenda, meet with Ministers, recruit new people, write further reports….just make things happen……. and happen they did.

There are many countries where the first action on tobacco or the first inspiration of activists on tobacco occurred because of Nigel’s program.

And finally, another reminder of the importance of networks:

In Egypt, the Cancer Society’s Patron was the President’s wife, Madame Sadat. She met with us, heard Nigel speak and took the message home: the next morning President Sadat issued a decree banning TV cigarette advertising. 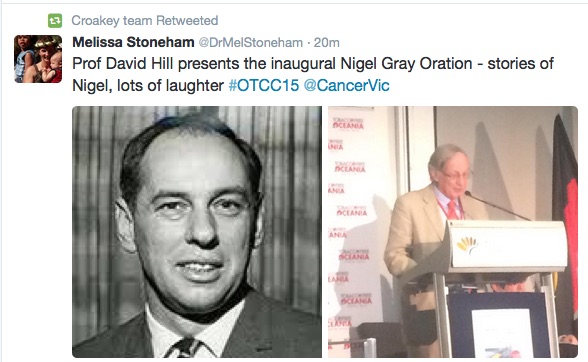 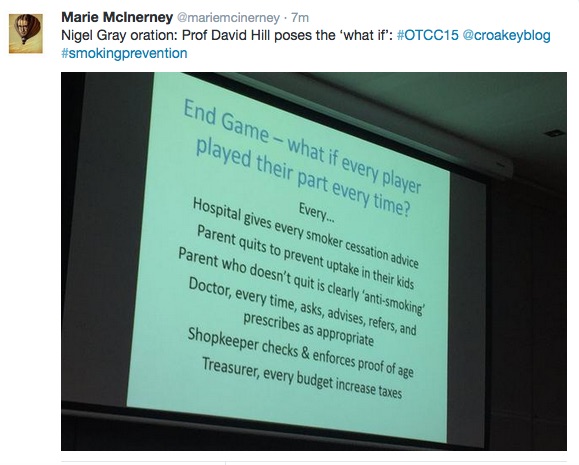