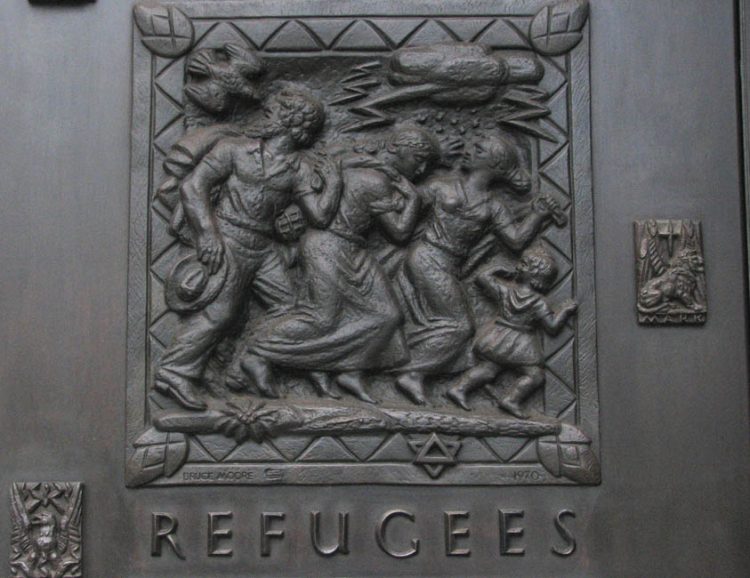 Refugees, migrants and displacement in the era of COVID-19

Introduction by Croakey: The novel coronavirus pandemic continues to send shockwaves across the globe, with US President Donald Trump in isolation and global cases now topping 35 million.

As has been starkly highlighted by the clinical fanfare and five-star treatment afforded to Trump while more than 200,000 Americans have died from COVID-19, the pandemic has a clear socioeconomic and racial gradient.

Perhaps most vulnerable to the potential ravages of an untrammeled outbreak and official responses are refugees and migrants, whose existence can be both economically and politically perilous.

The UNHCR recently joined with more than 100 NGOs to urge governments not to overlook refugees in their pandemic plans, particularly in terms of social safety nets and support services.

Filippo Grandi, UN High Commissioner for Refugees said preparedness measures meant the world had not yet seen a major outbreak among refugees, but there was a larger problem confronting these populations.

“The greatest challenge now will be to shield refugees from the economic impacts of the pandemic, which have hit the most marginalized, including refugees, the hardest. We need to focus on livelihoods and access to work for refugees to avoid them being pushed further into poverty. Only this will allow refugee families to survive,” Grandi said.

In Australia, refugee advocacy groups had been pushing the federal government to extend its support for refugees and asylum seekers in Tuesday’s COVID-focused budget, but were left disappointed.

Instead, the government slashed Australia’s humanitarian intake, thought it did commit $300 million to help Australia’s Pacific and Timor Sea neighbours to weather the COVID crisis.

Oxfam Australia CEO Lyn Morgain said this was welcome but nowhere near enough:

“The scale of this crisis requires a permanent and long-term increase in funding for Australia’s aid and development response. Without it, countries in our region and around the world won’t be able to get back on their feet, recent development gains will be lost, and poverty and inequality will deepen.

These impacts will last years, if not decades.”

In this piece for Croakey, public health doctor Lea Merone looks at the challenges for refugee health in an era of COVID-19.

Recent news stories have highlighted devastating fires in the large Moria refugee camp on the Greek Island of Lesbos, leaving 13,000 people without shelter in a time of global pandemic where at least 35 of the refugees fleeing the camp have tested positive for COVID-19.

The camp, which housed four times its intended capacity of fewer than 3000 people, was placed under lockdown owing to the pandemic before the fires broke out, and the devastation has left thousands of people without food or shelter, increasing risk of disease, death and transmission of COVID-19.

Six refugees have been arrested on suspicion of arson. Certain sections of the media consistently seek to portray refugees as criminals or illegal immigrants, contributing to prejudice and dehumanisation from their fellow citizens. It is essential, therefore, to acknowledge the significant disadvantage and discrimination experienced by refugees, including the deprivation of first and second- generation human rights, such as liberty, participation in politics, physical safety, adequate nutrition, healthcare and shelter.

The distinction between refugees, internally displaced persons (IDPs) and migrants is also important.

In the time of COVID-19, where social distancing is paramount to disease control, all these groups are more vulnerable to infection.

Around 28,300 people are forced to flee their home every day, largely owing to conflict and persecution. Most of these individuals are hosted in countries who are, arguably, among the least equipped to manage the complex social, psychological and physical health needs of refugees.

This is compounded by poor nutrition and access to sanitation which leave these groups more susceptible to severe disease and death. In refugee camps in particular, micronutrient deficiencies are a cause of significant ill physical and psychological health.

Nutritional deficiencies are only likely to worsen in the COVID-19 era, due to disruptions in complex global economic, food and health systems.

The World Food Program estimates that the number of people in low-middle income countries (LMICs) facing acute food insecurity will double by the end of 2020 to 265 million. The International Food Policy Research Institute predicts that an additional 140 million people will fall into extreme poverty in 2020. Similar record shifts in poverty levels are anticipated in Australia, and this will disproportionately affect migrants and refugees.

Prior to COVID-19, approximately 160,000 migrants and 18,750 refugees arrived in Australia annually, and the unemployment rate in these groups was around 20 percent.

At least 18,807 migrants and refugees are predicted to lose their jobs owing to the COVID-19 recession, despite many having skills in essential industries like construction, engineering or healthcare.

On temporary visas, unemployed migrants and refugees aren’t entitled to JobSeeker or any other form of government support, placing this group at high risk of poverty and exploitation.

Poverty is an independent risk factor for ill-health and is associated with poorer outcomes and prolonged illness. Prolonged illness itself increases the risk of poverty; a vicious circle ensues.

Access to health care is also a fraught question for migrants, with barriers ranging from from financial cost of appointments, travel and medications, to language and cultural hurdles and health literacy. These are magnified by the effects of the pandemic itself on an already overburdened community health sector, with facilities having to reorient towards outbreak control at the expense of service provision.

Contrary to the narrative peddled by some media outlets, displaced people are more likely to be victims than perpetrators of violence. Ironically, such tropes fuel resentment from local inhabitants that has been demonstrated to increase risk of violence against refugees. This risk is higher in countries less-equipped to handle large numbers of displaced people.

The recent fires in the Moria camp are not a new problem for refugees crossing over from Turkey. Lesbos has gained a reputation for being the “gateway to Europe”, and the Moria camp has become increasingly overcrowded since 2016, when media outlets reported hunger strikes, fires, violence and described the site as “a disaster waiting to happen”.

Overcrowding and inhumane conditions increase frustrations amongst refugee populations, and frustration increases the risk of violence and crime. Women in these camps are the most vulnerable, at risk of rape and physical harm from armed groups, human traffickers, locals, camp staff and other refugees.

Conditions in the Moria camp also underscore the challenges of outbreak control in such settings in the COVID era. Residents live “shoulder to shoulder” and access to health care is nominal at best. An average of seventy people share a toilet, there are long lines for food, water shortages and frequent blackouts.

When the camp was locked down for COVID-19 control, inhabitants felt trapped, with no security, nor means for escape. It is hardly surprising that tensions were high and violence ensued.

The Western media often portrays refugees as “other”, however, as recent wildfires in Australia and the USA have shown, climate change will make internal displacement a fact of life for many in coming decades. The Internal Displacement Monitoring Centre in Geneva recently estimated that some 65,000 Australians were internally displaced by the 2019-20 bushfire crisis.

Climate change, extreme weather events and COVID-19 create a perfect storm for displacement, overcrowding and disease transmission. In an era where we are fed hatred towards society’s most marginalised it is easy to lose sight of the fact that it could happen to any of us.

How can we help?

We all have a part to play in addressing the COVID-19 crisis: adhering to local lockdowns, wearing a mask, frequent handwashing and maintaining safe social distancing will all help reduce transmission and hence the risk of a catastrophic outbreak within refugee and migrant populations.

Donating to food banks and refugee charities is one tangible way to contribute. Perhaps the best way is through advocacy, whether that is lobbying governments, or speaking out against sensationalist and xenophobic media reporting.

The world will not be destroyed by those who do evil, but by those who watch them without doing anything – Albert Einstein

Resources for assisting refugees in Australia:

Lea Merone is a public health doctor, health economist and PhD scholar. You can follow her on Twitter at@LeaMerone