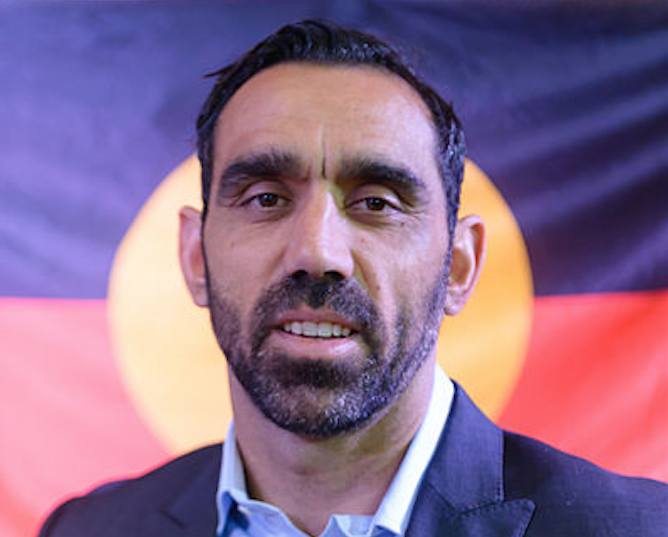 Refusing to play the race game

In this AFL Grand Final week, amid all the fanfare that surrounds the Sydney Swans’ third final in five years, I’m reminded of the difference that just one year makes. It was this time last year that the Swans (having failed to win a finals match) farewelled one of their longstanding players, dual Brownlow medallist and former Australian of the Year, Adam Goodes.

Goodes announced his retirement privately to his teammates on September 19, avoiding an official send off. He refused to participate in the Grand Final Lap of Honour or be considered for the annual Madden medal award for retiring players. Some commentators felt this was not a fitting end for one of the game’s greats.

I would argue it was a most fitting end. Goodes was performing in an arena that could not tolerate his presence. He withstood those conditions with great dignity, while steadfastly refusing to accept the persistent attempts to dehumanise and emasculate him as an Adnyamathanha and Narungga man.

Neither an “ape” or a “sook”, he is one of our warriors and will be remembered as such. 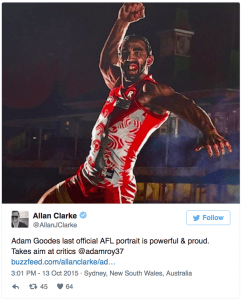 Mohawk scholar Professor Audra Simpson in the seminal text Mohawk Interruptus: Life Across the Borders of Settler States argues that the politics of refusal is a means by which Indigenous people exercise their sovereignty by offering an alternative to cultural recognition.

Simpson chronicles how the Kahnawà:ke Mohawks refuse the “gift” of American and Canadian citizenship and the authority of the settler nation state in everyday encounters, including refusing to accept the colonial account of one’s self. Refusal enables the Kahnawà:ke to “enunciate repeatedly to themselves and to outsiders: ‘This is who we are; this is who you are; these are my rights’”.

Consider how Goodes explained his departure from the AFL:

He left the game on his own terms. He did not require the “gifts” of the game to validate him as an Aboriginal man or his professional football career. 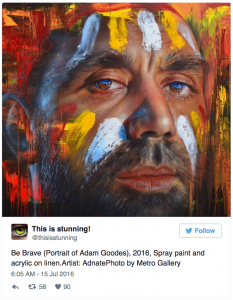 Goodes’ act of refusal is of personal significance to me because it is also a year since my husband quit the Queensland Police Service after a 15-year career.

He had spent over a decade resisting and withstanding racism on the job each day. Many speak about the dangers of being a police officer but few understand the additional dangers facing Aboriginal police officers situated within the culture of the QPS.

There were strong parallels between the daily indignities that Goodes faced and those experienced by my husband. These worlds collided after Goodes was booed with increasing intensity during the 2015 season. It prompted debate across the country about whether booing Goodes was racist, but it also prompted fellow police officers to joke about Indigenous hypersensitivity to racism within my husband’s workplace.

One week to the day of Goodes announcing his retirement, my husband too said “enough”. On the day he chose to quit, he never went back and he too refused to participate in an official send off.

His departure from the QPS was not indicative of his incapabilities as a Bidjara and Quandamooka man. It was a refusal to be located within an institution that insisted his Indigeneity was a risk, a problem, and a source of ridicule. It was a refusal to accept the burden of remedying racism within his workplace and was directly inspired by Goodes’ stance. 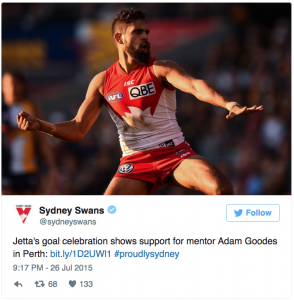 At this same time, Yorta Yorta opera singer Deborah Cheetham refused the “honour” of singing the national anthem at the AFL Grand Final because she could not bring herself to sing the words “for we are young and free”.

Australian responses to acts of Indigenous refusal are typically framed within a discourse of Indigenous deviance and deficiency. Here, Indigenous people are labelled “angry” “divisive” and “aggressive” or described as “selfish rabble” “whingers”, “sooks” and “playing the victim”. Indigenous refusal can also inspire feelings of sadness, sorrow and pity for us.

What many fail to realise is that whenever we as Indigenous people refuse to accept the “gifts” of the state, when we refuse to comply, perform or play on their terms, it is not because there is something wrong with us. 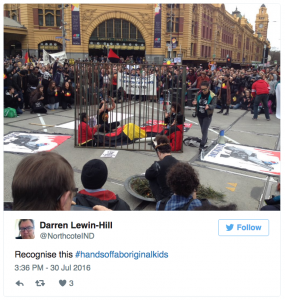 In responding to a discussion about the “problem” of remote Aboriginal communities on ABC’s Q&A program in 2014, Rosalie Kunoth Monks asserted:

I am an Arrente, Alyawarra First Nations person, a sovereign person from this country … My language in spite of whiteness trying to penetrate into my brain by assimilationists, I am alive. I am here and now and I speak my language and I practice my cultural essence of me. Don’t try and suppress me and don’t call me a problem. I am not the problem. I have never left my country nor have I ceded any part of it. No one has entered into a treaty or talked to me about who I am. I am Arrente, Alyawarra female elder from this country.

While Goodes has been a supporter of Recognise, a campaign that seeks recognition of Aboriginal and Torres Strait Islander people within the constitution, he repeatedly exercised his sovereignty on the sporting field through a politics of refusal.

He didn’t just refuse to accept racism in the game; he refused to accept that there was something wrong with his body. 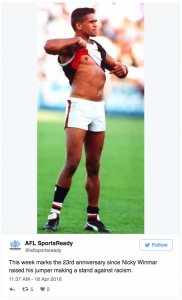 In his final years in the game, Goodes reminded Australia at every turn that he was not the problem. He directed the gaze of the nation upon itself. Whether it was talking about the truth of Australia’s shameful history, whether it was throwing an imaginary spear or pointing the finger at the crowd – Goodes, like Kunoth-Monks – refused to be “the problem”.

His final act of refusal when he left the game was to reject the “gifts” offered from the arena that every week sought to diminish him.

As I contemplate Goodes’ absence from the final this week, I don’t feel sorry for him.

He left the game like he played it; a sovereign Adnyamathanha and Narungga man.

Chelsea Bond is a Senior Lecturer in the Aboriginal and Torres Strait Islander Studies Unit (ATSIS Unit) at The University of Queensland.