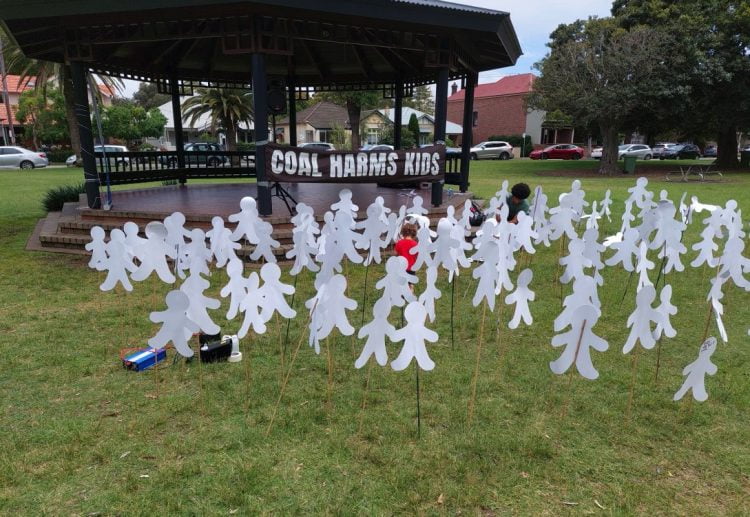 Representing the children aged 2 to 14 years in the Newcastle LGA who have asthma due to nitrogen dioxide exposure from the power stations. Photo supplied by author

In a statement, the EPA said it had imposed strict new reporting and monitoring requirements and a Pollution Reduction Program.

However, Dr Ben Ewald, a GP and conjoint senior lecturer in the University of Newcastle’s school of medicine and public health, told The Guardian that the EPA had “squandered this opportunity to improve the health of the surrounding community, especially [in] those children with asthma due to power station pollution”.

“Coal harms kids” was the message in large letters on a banner in Newcastle’s Centennial Park on Wednesday 8th December. It was a protest by concerned locals from Newcastle and the Central Coast of New South Wales, worried by the high levels of toxic nitrogen oxides (NOx) released by Vales Point, one of the two coal fired power stations at the southern end of Lake Macquarie.

In public statements Delta Energy, who run the plant, are quick to point out that they operate within their license conditions. The problem is that the license conditions set by the regulator, the NSW Environmental Protection Authority (EPA) are extremely generous.

The regulations in NSW specify that from 2012 the oldest class of power stations that used to be allowed stack NOx concentrations of  2500mg/m3 would have to meet the more recent standard  of 800mg/m3. The regulations, however, include a loophole allowing the EPA to grant an exemption  from this rule lasting up to five years.

Delta asked for and was granted such an exemption in 2012, and again in 2017, and the EPA recently released its decision on their third such request.

On the grass in front of the banner are 150 cardboard cut-out silhouettes of small humans.

These represent the children aged 2 to 14 years in the Newcastle LGA who have asthma due to nitrogen dioxide exposure from the power stations. This number is from health impact calculations I did for the Central Coast environment group Future Sooner.

The other inputs are an estimate of how much asthma is caused per unit of NO2, population data from the ABS and asthma prevalence from the NSW health survey, giving numbers of children in each LGA who have asthma that can be attributed to the power station derived portion of ambient NO2. It is not possible to disaggregate by power station.

For the Central coast LGA there are 335 (five percent of all asthma in the age range) for Lake Macquarie there are 321 (six percent) and for Newcastle there are 150 (four percent). For places further away from the power stations the proportion falls away quickly, so in the northern outskirts of Sydney, Hornsby has only two percent of child asthma due to power station NO2.

Asthma has many causes, but there are few causes that could be fixed by better implementation of existing environmental regulation.

Across the lake from Vales Point is Eraring power station. During 2012 it undertook a modernisation of its furnaces to install low NOx burners so now emits substantially less of this pollutant. Figures from the National Pollutant Inventory show that while Eraring emits 1.34 Kg of NOx per MWh of output, Vales Point emits 2.44 Kg/MWh, ie an extra 82 percent.

The two power stations have taken quite different approaches to managing their responsibility to the health of the surrounding community. On the West of the lake, Eraring spent the money and upgraded its equipment, while on the East of the lake, Delta keeps coming back time and again asking to be let off.

The other major health problem attributed to pollution from coal fired power stations is from exposure to fine particles known as PM2.5. These form in the atmosphere from gases release by the power stations, and can travel long distances. They have been estimated to be 17 percent of the air pollution in Sydney, which is 60 to 160 kilometres away.

Researchers from NSW Health and the NSW Department of Primary Industry and Environment have estimated that the power station pollution causes 31 to 68 deaths per year across greater Sydney. This is the aggregate effect from the combined pollution from the five power stations, as they have not done the analysis for each one separately.

Due to distances from Sydney and prevailing winds it is likely that the Lake Macquarie power stations do more harm to health per MWh of production than do those located further away at Lithgow or Muswellbrook.

It would be a valuable extension to the recent research to attribute the health damage to individual power stations. This would allow inclusion of the health damage in decisions about the closure order over the next 15 years.

It would be a poor outcome for the community if the most damaging power stations were allowed to run the longest.

The group Doctors for the Environment Australia, of which I am a member, wrote to the NSW EPA outlining out the needless health damage occurring due to the current license arrangements, and calling on the EPA to refuse further exemptions for the Vales Point power station.

PrevPreviousFive key lessons from the fight against alcohol-related harm
NextOn the National Preventive Health Strategy, some rays of hopeNext