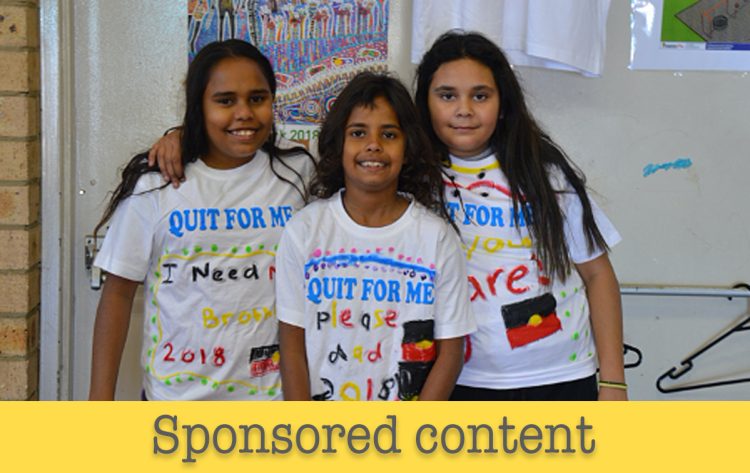 Relationships, recognition and trust are the keys to a campaign helping Aboriginal people stay smoke-free on the NSW South Coast.

This article is published by Croakey Professional Services as sponsored content. It was created in collaboration with the Aboriginal Health and Medical Research Council (AH&MRC) of NSW, which funded the #OurHealthOurWay series.

For the people of the Tharawal nation, on the lands now known as the New South Wales South Coast, the challenges of 2020 have been relentless, with bushfires, flooding and the novel coronavirus pandemic representing something of an unholy trinity.

“This year has been really difficult. We’ve had the trifecta – fires, then floods, then COVID. It’s had a massive impact,” explains Uncle Darryll Farrell, from the South Coast Medical Service Aboriginal Corporation (SCMSAC).

Servicing a huge swathe of the Shoalhaven, from Gerroa to the Victorian border, SCMSAC operates eight sites and offers a range of services including family support, permanency support for children in out-of-home care, health, and wellbeing. One of its headline programs is Tackling Indigenous Smoking, or TIS, which is overseen by Farrell and is part of a Commonwealth-funded effort.

It’s taken ten months for access to be restored all the way down the coast following the fire and flooding disaster, with staff only able to reach some communities in recent weeks. These challenges, and the restrictions on gatherings due to the COVID-19 pandemic, have forced a significant rethink on the way health promotion is done, with group sessions and school visits giving way to focused TV, radio and social media campaigns — as well as telehealth treatment options — to reach people isolating, whether by circumstance or choice.

When SCMSAC were finally able to get back into some communities, Farrell says their first priority was to offer support, delivering packs of essentials like shampoo, soap and shaving cream, and taking the opportunity to reconnect.

“It was basically about letting them know we were there for them,” he says.

Farrell knows all too intimately what a toll smoking can take, on families and communities.

His father was a heavy smoker and had emphysema, and “growing up in an Aboriginal community, lots of my uncles and aunties died from smoking, and lots of young people smoked.”

“It was everywhere,” he says.

This was why, though he had previously worked for Anglicare and NSW National Parks, Farrell says he jumped at the chance to join the TIS program.

“When the opportunity came along to educate the community about smoking and the harms, I was very happy to take it on.”

The federal government first funded a smoking cessation program specifically targeting Aboriginal and Torres Strait Islander communities in 2010, and it has been running in its current form, TIS, since 2014. National coordinator Tom Calma, AO, was a key advocate for the initiative, describing smoking as the “single most devastating cause of death and disease among our peoples”.

The price of smoking is literally thousands of prematurely dead Aboriginal and Torres Strait Islander people: cultures and communities without elders; dying languages, lost traditions; children without parents; absent grandparents, uncles and aunties, and the great burden of grief and suffering that comes with it.”

The determinants of smoking are complex, and include ongoing trauma, minority stress, racism and economic exclusion, mirrored in the experiences of colonised peoples in Canada, New Zealand and the United States, where rates of tobacco use are also higher among First Nations populations.

Though smoking rates remain higher among Australia’s Aboriginal and Torres Strait Islander peoples (38 percent smoked daily in 2018-19 compared with 13 percent of non-Indigenous people), they are also declining significantly, and at a much swifter pace than among the general population, particularly for groups such as pregnant women.

Farrell attributes this, in large part, to the success of the TIS program, which focuses on community-driven and locally-tailored approaches.

At SCMSAC, the TIS team has a host of strategies, including sponsorship of and collaboration with local sporting teams, running (pre-COVID) school education sessions and community groups and events, face to face counselling and brief interventions with CO2 breath testing, as well as support groups and quit support groups.

“We play a big role in local communities. It’s not just about the program, it’s about creating strong relationships with communities to deliver great health outcomes and help people on their quit journey,” says Farrell.

Flexibility, cultural safety and community ownership are emphasised to ensure “it’s a comfortable environment for them to begin their smoking cessation journey,” he adds.

All the promotional materials have been customised with familiar faces and places, with community members “more inclined to pick up a flyer if it’s got on it someone they know, and to read a book if there’s a local landscape on the cover,” he says. SCMSAC have produced their own Quit Tip booklets, leaflets and factsheets, and a MoneySaver challenge. 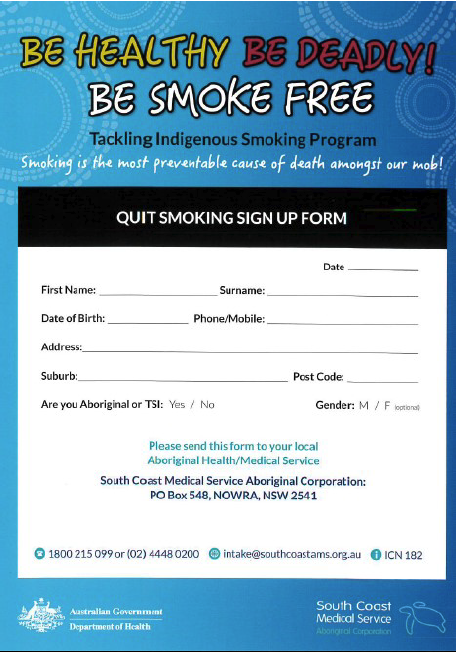 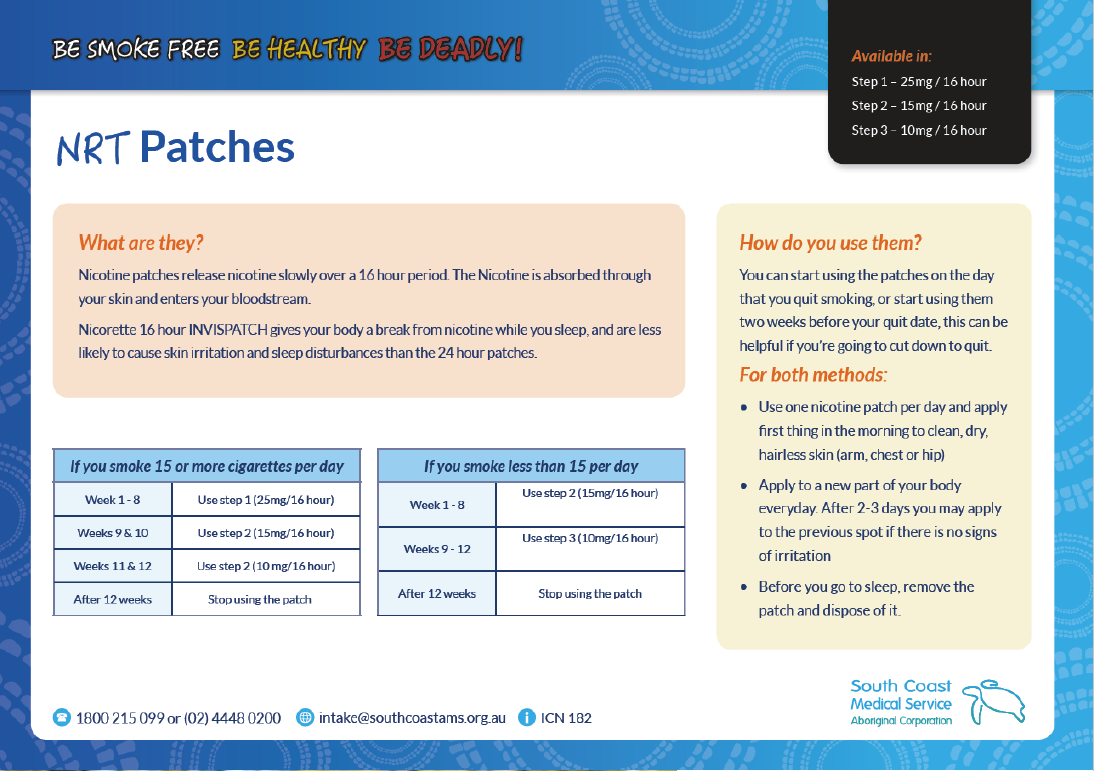 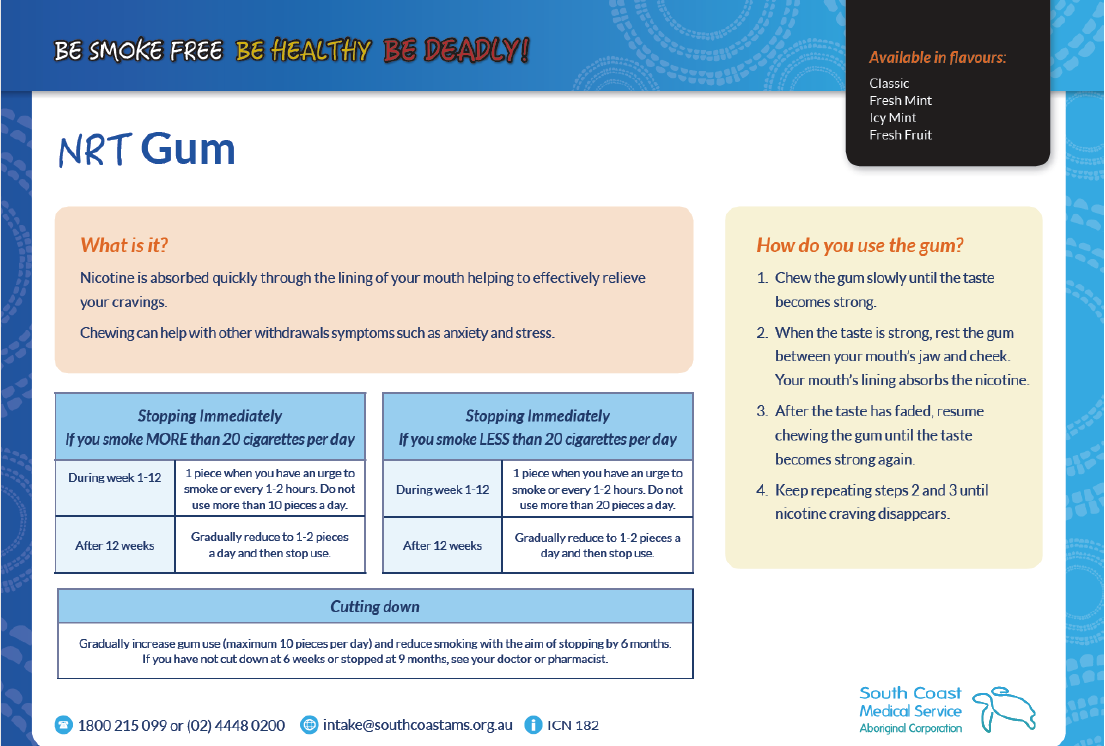 Local execution and leadership of the program is a key factor in its success.

“It’s a big geographic area, and my family live up and down the coast,” says Farrell.

“When I’m travelling up and down the coast, people know me, and they know my family. They know who I am as a person. They know my values.”

Every person who fills in a referral form is documented in a database and followed up by the TIS team for support. SCMSAC also regularly surveys the broader community about its smoking programs, for feedback and ideas.

Free nicotine replacement therapy is an important pillar of the TIS framework, with a referral and voucher system to access NRT through SCMSAC sites at Nowra, Wreck Bay, Jerrinja, Goulburn, Bega, Batemans Bay or Falls Creek, and participating pharmacies at Nowra, Culburra or Vincentia.

For those who can’t easily access NRT, support is available.

“With the communities we work with, if they’re very isolated and don’t have a car, they can’t get NRT. We deliver the products, for free,” says Farrell.

This article was written by Mark Ragg and edited by Amy Coopes, on behalf of Croakey Professional Services. It was sponsored by the Aboriginal Health and Medical Research Council (AH&MRC) of NSW to share strengths and successes of Aboriginal Community Controlled Health Organisations in NSW.

New standard tackles the toll from inappropriate prescribing of opioids

PrevPreviousBushfires drive mental, respiratory health increases: report
NextAs 2020 draws to an end, what have we learnt?Next