Religious discrimination bill is roundly condemned across the health sector

Fifteen leading health organisations in Victoria have issued a joint statement sounding the alarm about the Federal Government’s religious discrimination bill, warning that it risks reducing access to healthcare for the LGBTIQ+ community, vulnerable women, minority faith communities and people with disabilities.

“This Bill will jeopardise the ability of many people to find health care that is compassionate and non-judgemental,” says the statement (published in full below).

“Laws that privilege religious views over patient health are unacceptable.”

The statement follows concerns raised across many sectors, including by unions and employers as well as law academics and human rights advocates like former High Court Justice Michael Kirby.

Many other health and medical groups have also formally raised concerns in submissions:

Mental Health Australia says the legislation risks increasing stigma and discrimination against already marginalised groups of people who have disproportionate rates of mental illness, and warns about the potential impact on availability of services to LGBTIQ+people, particularly in regional and remote areas.

VMIAC, the peak Victorian organisation for people with a lived experience of mental health or emotional challenges, is “deeply concerned” the bills will lead to people being refused appropriate and timely healthcare, and “make it easier to offend, humiliate, intimidate, insult or ridicule population groups, such as people diagnosed witha mental illness, women, people with disabilities, people of colour, Aboriginal and Torres Strait islander peoples, LGBTIQ+communities, including children and young people and those of differing religions”.

The Royal Australian and New Zealand College of Psychiatrists suggested the bill may conflict with current professional and ethical standards for medical practitioners.

The Australian Federation of AIDS Organisation says the bill risks undermining efforts to end HIV transmission, while a submission by the Queensland AIDS Council reported on its community consultation process:

Overwhelmingly, the community let us know that these laws will make them feel unsafe in their school, workplace, in their churches, in their relationships, communities and bodies – in the places people have a right to feel safe and accepted for who they are.

Many people reported feeling scared, angry, undervalued, invisible, and even suicidal as a result of these proposed laws.

The LGBTI communities spoke clearly to us they are concerned about these laws and the ways that these laws would impact them, especially young people in rural and regional areas, and the ways in which they will enshrine systemic discrimination towards LGBTI people in Australia and reduce their access to important services and supports.”

Below is the joint statement issued today.

We urge Prime Minister Scott Morrison and Attorney-General Christian Porter to ensure that no part of the Religious Discrimination Bill privileges religious interest above the interest of other Australians.

The second draft of the Australian Government’s proposed Religious Discrimination Bill has the potential to compromise care for marginalised Victorians and constrain the health sector’s ability to provide that care.

As leaders within and advocates for the health and wellbeing of our communities, we strive to provide safe and high-quality healthcare for all people without discrimination.

The primary aim of the Bill is to prohibit religious discrimination; however, even with the recent amendments, there remains a range of exemptions that will allow discrimination to continue and health care to potentially be adversely impacted.

Under the Bill, health practitioners can still refuse to perform certain procedures or dispense certain drugs, provided they refuse to do so for all patients. This means that many people who use health and community services are at risk of having their rights denied or disrespected.

As a result of these unprecedented proposed rules, people who may be the subject of unfavourable religious views, including those seeking access to reproductive services, transgender services and/or contraception, will find it harder to access health care from health professionals.

The LGBTIQ+ community, vulnerable women, minority faith communities and people with disabilities already face barriers to accessing care. This Bill will jeopardise the ability of many people to find health care that is compassionate and non-judgemental.

Laws that privilege religious views over patient health are unacceptable.

We call on our colleagues, community partners and professional associations to join us in making this clear. 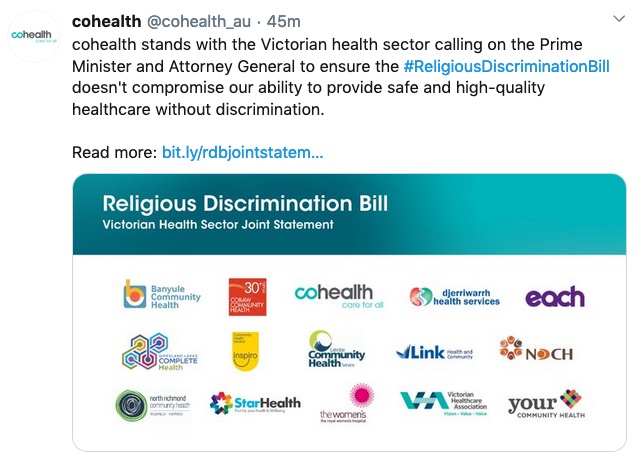 Read more in this report from The Age.