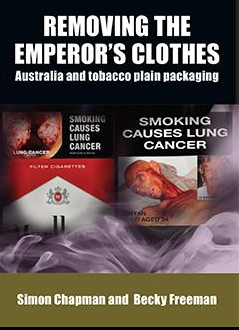 As this post below points out, we get a lot of books about party politics and politicians, and not so many about public policy. But last year at least saw the publication of Removing the emperor’s clothes: Australia and tobacco plain packaging by Simon Chapman and Becky Freeman (which made the list of 2014’s recommended reads by Croakey contributors).

The book examines the policy and political path to December 2012, when Australia became the first nation in the world to require all tobacco products to be sold in standard ‘plain’ packs under the leadership of the then Health Minister Nicola Roxon.

As its blurb says:

At its simplest, the story is one of the public good against commercial evil – governments and health authorities introducing an evidence-based measure in the face of ferocious opposition from a lethal and discredited, but still powerful industry. But the story has much more than this. It has heroes and villains, political chicanery, legal cases in the High Court and international tribunals, global companies promoting their claims through front groups, research versus junk science … smear campaigns, shadowy lobbyists, battles for media hearts and headlines, and dire warnings about Chinese criminal gangs.

Thanks for this review of the book from South Australian Labor MP Chris Picton who was on the inside of this historic policy struggle as a key advisor to Roxon.

Late last year our nation lost one of its pioneers of tobacco control and preventive health, Nigel Gray AO. He was a man who helped to turn rising evidence about the health risks of smoking into an international movement and achieved the introduction of public health laws that will save millions of lives.

The tobacco control movement today, and all modern steps to put an end to smoking are built on the work of the first public health advocates like Gray. Australia’s world-first plain packaging reforms could not have been possible without our strong public health community that he helped to create.

I was able to meet him briefly when he presented Nicola Roxon with a public health award named in his honour for introducing plain packaging and it was clear he saw this law as a massive victory against the deadly industry.

In memory of a man who devoted his life to reducing the number of lives impacted by smoking, it is a fitting time to read Removing the Emperor’s Clothes by Simon Chapman and Becky Freeman on this decade’s plain packaging revolution. Chapman was one of Gray’s many mentees.

This is a book that chronicles the delivery of a policy that aims to reduce the number of smokers from the next generation ever lighting up – and was achieved only after overcoming one of the best financed single-issue campaigns Australia has ever seen.

Through the text we’re presented with a readable account of the benefits of plain packaging, the arguments that were made against it by big tobacco companies, and how those arguments were demolished – both in the public debate and in the High Court.

Chapman is staunchly independent, so this isn’t a behind-the-scenes account of all the inside government decision making, but has a strong focus on how the policy debate was conducted and won and what the next steps are internationally.

It is a shame that this is one of relatively few books written directly about the introduction of an Australian public policy – as opposed to the mountains we see written about party politics and politicians. It is one thing to win elections and take office – but it is quite another to use that position to achieve substantial and long lasting reforms.

And there’s no better example of such an important and difficult reform as plain packaging. It is a policy with supporting evidence and tremendous potential benefits counterbalanced by the tobacco companies with their massive financial power, willing to spend a fortune (with an advertising arsenal similar to the major political parties in the 2010 election) to stop it.

It took huge political courage – a Herculean campaign from my then boss Nicola Roxon – as well as strong support from successive Prime Ministers Kevin Rudd and Julia Gillard. But you also can’t doubt the impact of preconditions that were in place such as the Labor Party’s ban on tobacco donations in 2004, the end to the tobacco farming industry in the 1980s and previous reforms like bans on smoking in public places and graphic health warnings on packs.

In this book you get a great combination: a depth of policy detail that gives the text its credibility, the arms-race nature of the political battle that took place as big tobacco’s arguments called out for what they are, and Chapman’s sense of humour permeating right throughout – including YouTube links to The Chaser, Monty Python and Chapman’s own public health hobby rock band.

One of the best parts of the book is in the early pages – we read a moving story from Karen, a cancer sufferer, who tells of the daily struggle of living with the disease caused by smoking. It is important to always remember that these policy battles are not academic – they’re about saving real Australian lives.

In my view after two years in operation plain packaging in Australia is now entrenched. It is hard to imagine even a conservative government turning around and allowing advertising back on cigarette packets. For big tobacco the battlelines are now overseas – with Ireland, New Zealand, the United Kingdom and other countries all taking steps towards introducing the laws in their countries.

The early evidence from those countries shows that many of the same bogus arguments such as ‘it won’t work’, ‘it is a nanny state’ and ‘it will cost billions’ are being rolled out afresh as though the Australian debate never occurred.

There’s no doubt that big tobacco threw so many millions of dollars against this policy in Australia, not because they were worried about this country, but because they were worried about the spread of the policy worldwide. It’s exactly because it will work – it will reduce sales and reduce profitability of these evil corporations – that they are willing to fight so hard to prevent this action. This book helps to arm governments and public health advocates in those countries with the background from how tobacco companies tried to stop the reforms and how they were defeated.

All of us who played a small part in the delivery of this policy are immensely proud and have well and truly bored the pants off of our friends, family and colleagues about its virtues. This book will help to further spread the message of its success, and also about the benefit of preventive health action broadly to save money and save lives.

Chris Picton is a South Australian Labor State Member of Parliament. He previously served as Chief of Staff to Nicola Roxon as Attorney-General and was her preventive health adviser when the plain packaging policy was announced.