Reporting from a meeting of health leaders: options for future reforms

Options for reducing waste in health spending and for structural reform were highlighted at a roundtable meeting held in Canberra last week to celebrate Medicare’s 30th birthday.

As previously mentioned, the meeting was organised by the Australian Healthcare and Hospitals Association and the Menzies Centre for Health Policy at the University of Sydney.

Thanks to AHHA CEO Alison Verhoeven for the report below.

Health reforms need to focus on the big picture 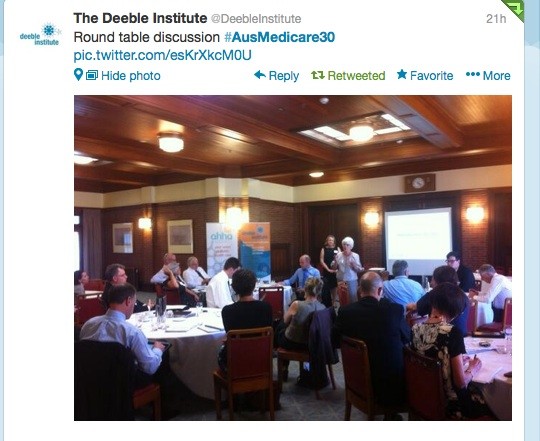 When Bob Hawke introduced Medicare 30 years ago, he warned that without it, 2 million Australians faced potential financial ruin in the face of illness.

Today there are around 8.5 million Australians aged under 30 who have never know healthcare without Medicare.

While most Australians are familiar with the out-of-pocket costs often associated with obtaining health services, we have come to expect access to free public hospital services, and many appreciate the benefits of bulk-billed consultations with doctors.

However, as our society ages and the burden of disease shifts from acute to chronic, we are likely to consume more, and more expensive, health services. Like health consumers in most developed countries, our expectations are shaped by the availability of new technologies, treatments and drugs.

But are these expectations realistic in a time when healthcare costs are increasing and the political appetite for big government spending is on the decline?

Is the 9.1% of GDP currently attributed to health expenditure too much, just right or too little?

In recent months, a range of options where savings might be made have been proposed, including increasing co-payments, ending private health insurance rebates, abolishing bulk billing, introducing managed care enrolment plans and health savings accounts.

Each has their pros and cons, but none get to the heart of the issue – that is, the broad structural challenges facing the health system as opposed to a narrow financing focus.

A roundtable of health leaders co-hosted in Canberra last week by the Australian Healthcare and Hospitals Association and the University of Sydney’s Menzies Centre for Health Policy debated these issues.

While opinions were inevitably diverse, there was shared agreement that Australia’s high quality, safe and effective health system must continue to be accessible and equitable for all Australians.

She proposed that acceptance of any reform would require broad consultation with practitioners, policymakers and consumers. Achieving major reform also required building on what already exists.

She cautioned that successful reform is often preceded by what seems like failure, and noted that the creation of Medicare 30 years ago was only possible because of the groundwork laid under Medibank.

She acknowledged the role of the private health insurance industry in Australia, and noted the challenge of keeping premiums affordable and the role of the government-owned Medibank Private in providing a balancing effect on the sector.

Ask the right question
Whether Medicare is sustainable is the wrong question to ask according to Stephen Duckett, Director of the Health Program at the Grattan Institute.

He proposed that Australians should instead be questioning whether we get value in Medicare and the 9% of GDP spent on healthcare.

He noted that while Australia has a good health system in international terms, the challenge is to sustain and improve it by making changes over time.

Disadvantage and health
John Glover, Director of the Public Health Information Development Unit at the University of Adelaide, highlighted the impediments in accessing MBS and PBS data since 2009-10.

Because current data is not available, it is difficult to get a true picture of how access to and use of general practice services varies by socioeconomic status. Data on geographic variations are even more dated.

However, the data that are available suggest that the most disadvantaged in the community have:

Similar findings were reported more than 20 years ago in the National Health Strategy Research Paper No 1, Enough to make you sick (AGPS 1992).

Bulk billing
Bulk billing proponent Con Costa, President of the Doctors Reform Society, challenged general practitioners to focus their attention and energy beyond the confines of their surgeries, to reach out to the most disadvantaged in the community.

He proposed more home visits, aged care facility visits and end of life care at home visits, and adjustments to Medicare to allow for this.

Copayments add to longterm costs
The negative of impact of copayments on consumers was noted by Rebecca Vassarotti of the Consumers Health Forum.

She highlighted stories shared by consumers, particularly young families, older households and individuals with chronic illness, of a growing gap in equitable access to healthcare in Australia.

Avoiding GP visits and not being able to afford prescription medicine paradoxically increases long-term health expenditure as treatment is delayed to the point consumers need emergency care at hospital.

Rather than short-term fixes, like introducing or increasing copayments, she argued governments should review how we structure the health system and distribute health funding.

Spend smarter
President of the Australian Medicare Association, Steve Hambleton, says if we do not want to spend more on health, then we must spend smarter.

He discussed the Lancet Commission Global Health 2035 recommendations where countries lower barriers to early use of health services and increase access to disease prevention in order to minimize the impact of medical expenses.

Dr Hambleton argued that keeping people out of hospital is the best form of keeping health expenditure down, and requires investment in preventive and population health in the community.

Look for value for money
Shaun Gath, CEO of the Private Health Insurance Administration Council (PHIAC), discussed the role of private health insurance in the context of Medicare.

He noted the roughly $200 price difference of “top” hospital products among the various insurers, and advised that consumers could check out www.privatehealth.gov.au to better inform themselves before signing up to an insurer and ensuring the best value for money.

Tips for tackling waste
Adam Elshaug, of the Menzies Centre for Health Policy at the University of Sydney, challenged policy makers to focus on reducing waste and trialing new payment models.

He noted work being undertaken by the National Institute for Health and Care Excellence in the UK and Choosing Wisely in the US, and highlight findings that show that around 30% of health spending in the United States is wasteful.

While Australia’s MBS has 5,703 items listed, the majority are longstanding and only around 3% of these items have been formally assessed against contemporary evidence of safety, effectiveness and cost-effectiveness.

The work of the Department of Health’s Medical Services Advisory Committee should inform waste reduction efforts. New payment models might include blended payments and medical home or accountable care models.

Paying too much for medicines
Reforming PBS pricing should be a priority, according to Philip Clarke of the University of Melbourne.

Many of the most popular drugs are now coming off of their patents, and while new technologies are expensive to develop, the cost of production rapidly falls.

Incentives to use more generics in Australia could include variable co-payments for drugs with a dispensed price of under $50 or $75. Some of these savings must be passed on to consumers to encourage uptake of generics.

In conclusion
An afternoon of health policy discussion cannot do justice to the difficult questions of structural reform or health financing, and the viewpoints and solutions debated were of varied merit.

What is not debatable is the passion of Australia’s health leaders to contribute to reform discussions, and the willingness of all to entertain innovating proposals to progress development of an economically sustainable, effective and equitable health system for Australians.