But focussing on strengths and protective factors, as well as the use of population-specific research methods and tools, is less harmful and can help to paint a true picture of health inequalities.

In the final Croakey Conference News Service article from the World Congress of Epidemiology 2021, Nicole MacKee reports on an industry roundtable, sponsored by the ANU.

Searching for the protective factors that contribute to better health outcomes for Aboriginal and Torres Strait Islander people, rather than focussing on pathologies, can help to break down racist stereotypes and inform more beneficial health strategies, according to a leading researcher.

Associate Professor Ray Lovett, an Aboriginal (Ngiyampaa/Wongaibon) epidemiologist and director of the Mayi Kuwayu Study at the ANU, said his team had advocated for a more holistic view of Aboriginal and Torres Strait Islander health, rather than a simple focus on pathologies.

“When we talk about strengths-based [research], we are not talking about hiding anything, which is what we have been accused of in the past,” he said.

“As social epidemiologists, we try to identify significant links or associations between exposures and outcomes. But I have always questioned: why can’t we use that approach to identify what we call protective factors?” 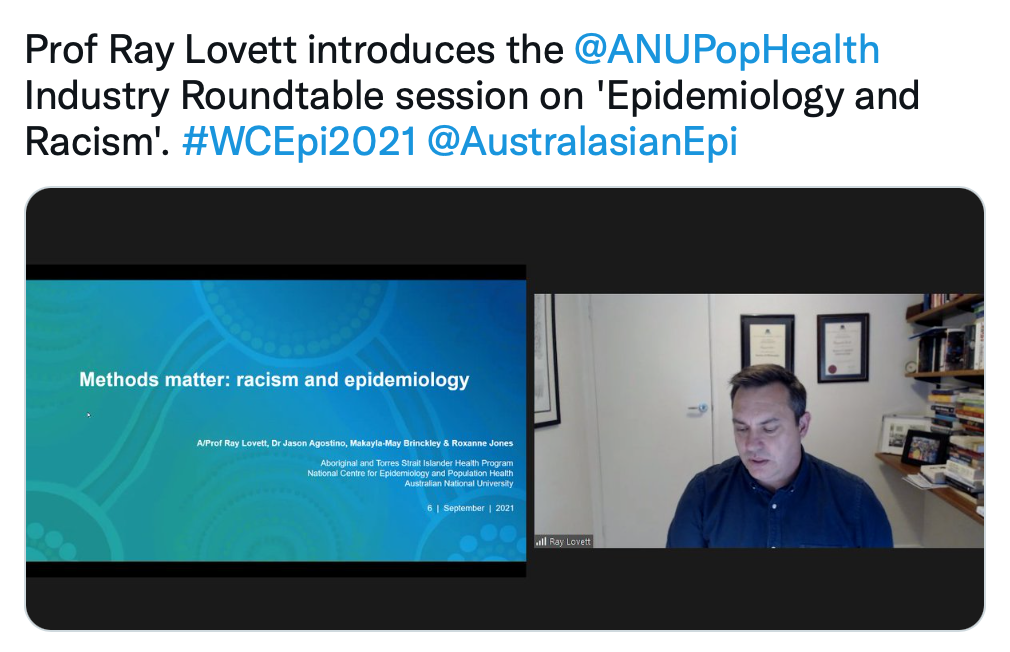 Lovett pointed to the experiences of the Stolen Generations. “We know they generally have poorer outcomes, but there is a subset within that population who do have good outcomes,” he said, “We need to look at why those outcomes exist in light of that history.”

He said this positive-outcomes approach was based on “salutogenic theory”, which focussed on who was succeeding and the factors associated with their success.

“There are a range of pathologies that are identified using epidemiological methods, but you really need to involve the population of interest to identify those other protective factors. What are those things that different populations believe contribute to better health outcomes for them?”

Professor Emily Banks, Professor of Epidemiology and Public Health at the ANU, said in working with Lovett and the Mayi Kuwayi team, she had learnt the central importance of working in partnership with Aboriginal and Torres Strait Islander people and the need to take a strengths-based approach to epidemiological research.

“Often, we epidemiologists are searching for the significant result which shows some sort of train wreck – that is what we have been conditioned to do; always looking for that hazard – we are not trained particularly to look at salutogenic factors and we are not trained to look at protective factors,” Banks said.

“It’s also about listening and knowing that the thing we are looking for is constructive evidence to reinforce positive things and strengths and to be shouting from the rooftops when those things are found.”

Professor Joan Cunningham from the Menzies School of Health Research asked the panel for their views on how to make epidemiology “anti-racist”.

“We need more very experienced epidemiologists like yourself to use those approaches as well and promote them.”

Lovett highlighted his group’s work on age-standardised mortality rate (ASMR) in monitoring trends in health equity and called for the adoption of an Indigenous population standard in health equity reporting.

“Standardising outcomes to the age distribution of other populations can deny the population of focus accurate information about their health and well-being, and reinforce structural racism,” the research paper stated.

Lovett said his team’s work had shown that the choice of standard population affected ASMR, rate differences, and rates ratios and therefore could “materially alter interpretation”.

“But we still to this day are using the non-Indigenous population as the standard population for all of our reporting in Australia; why we are still doing that?”

Lovett said using the Indigenous population standard was critical in accurately informing local and national decision-making, including the Closing the Gap policy. 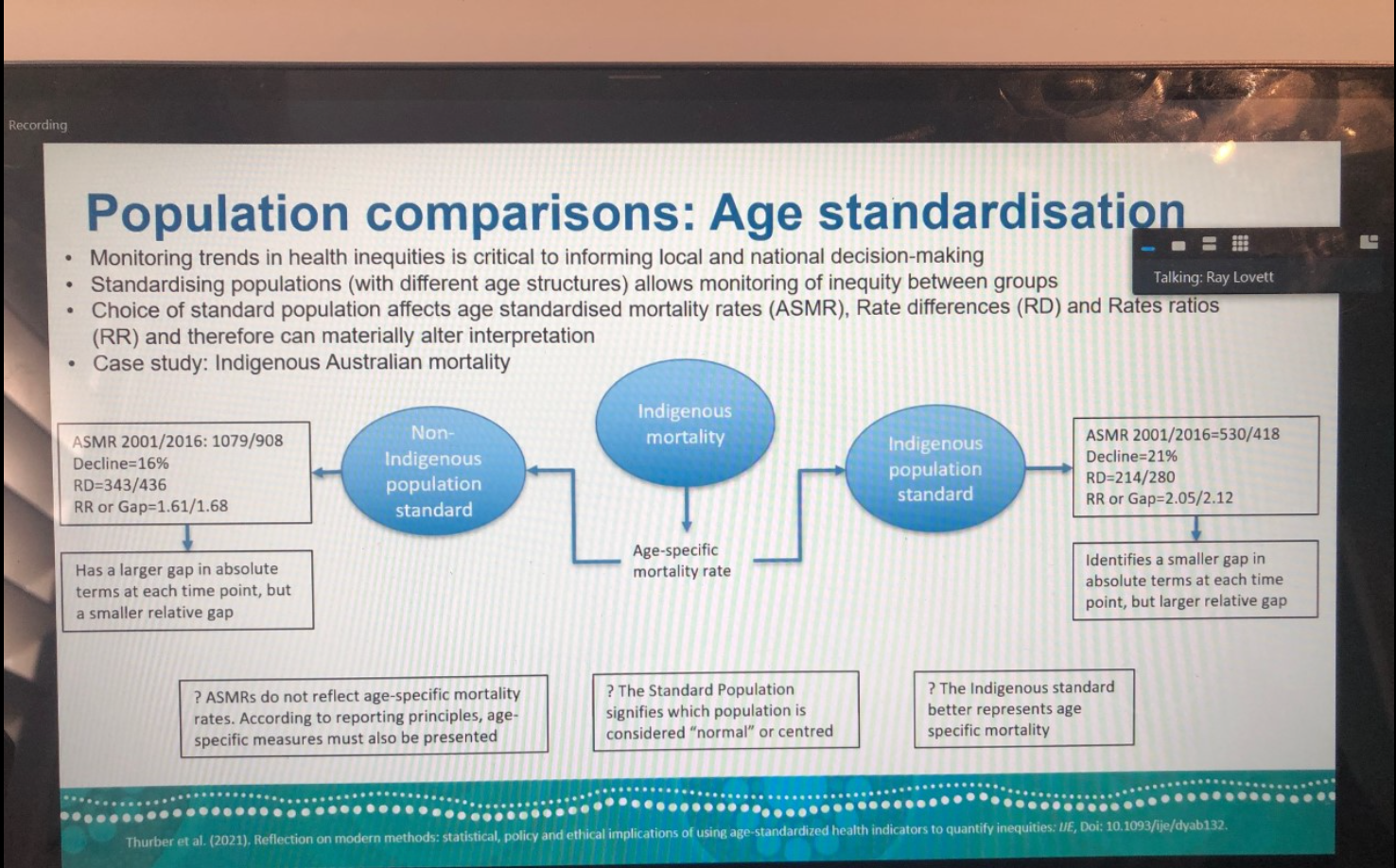 In a cohort of more than 8,000 Aboriginal and Torres Strait Islander people, the researchers found that almost six in 10 participants had experienced racism in their daily life, and four in 10 participants felt they were treated with “less respect than other people”.

Dr Roxanne Jones, a Palawa woman who was born and raised on Gubbi Gubbi land and postdoctoral fellow at the ANU, said people who experienced discrimination or broader racism had poorer health and wellbeing outcomes across the board.

Jones said the study found that discrimination was more commonly reported by younger versus older participants, and female versus males, and those living in remote versus regional areas. 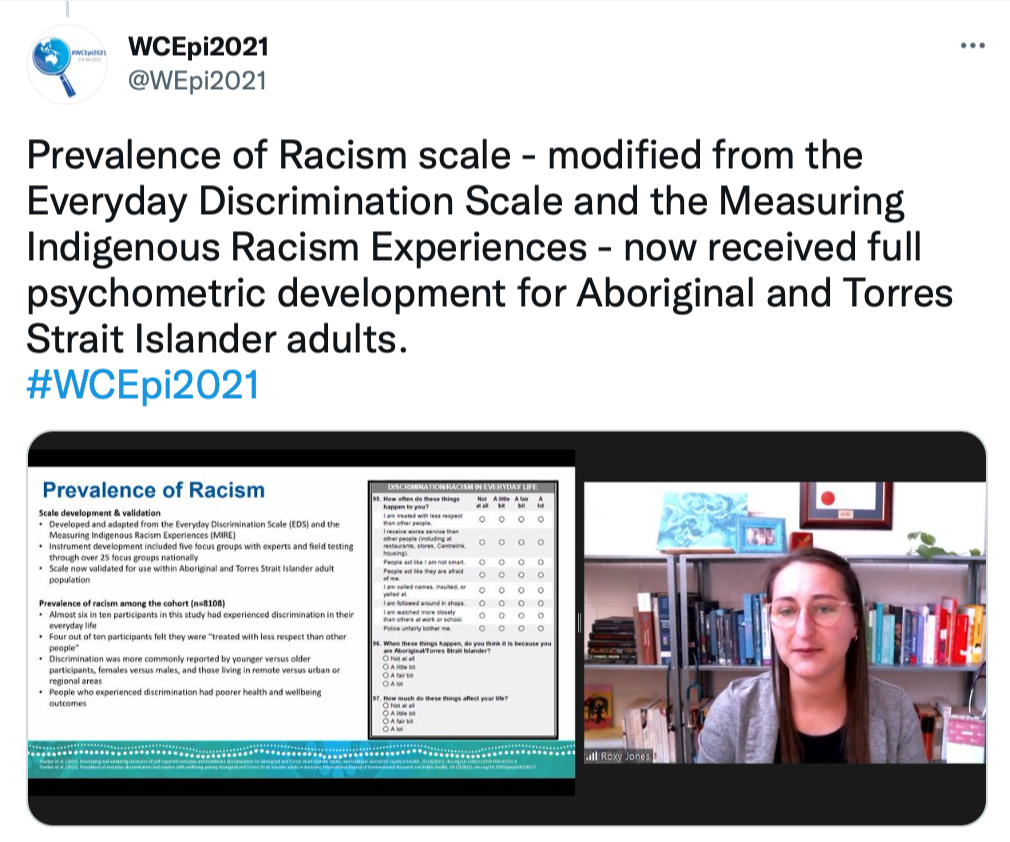 She said this may reflect a greater willingness among younger Aboriginal and Torres Strait Islander people to report racism and discrimination.

“It may not necessarily be that our older population within the Mayi Kuwayi study aren’t experiencing racism; it could just be that it has become normalised within their lives, so they are less likely to see it as a problem and report it,” she said.

Lovett added that awareness of racism had grown in recent times and the younger population may be better informed than older generations.

While he said the older generation was not immune to racism, it was sometimes so commonplace that they didn’t see view it as racism.

“What we would consider in regional and urban areas as racism and racist treatment, in some areas, it is quite normal unfortunately,” Lovett said.

Dr Maykayla-May Brinkley, Wiradjuri woman and Postdoctoral Fellow at the ANU, discussed the development of a culturally modified Kessler Scale (K-5) for use in Aboriginal and Torres Strait Islander people.

“There has been limited assessment of the psychometric properties and validity of the Kessler scale for use within the Aboriginal and Torres Strait Islander population despite its widespread use.” 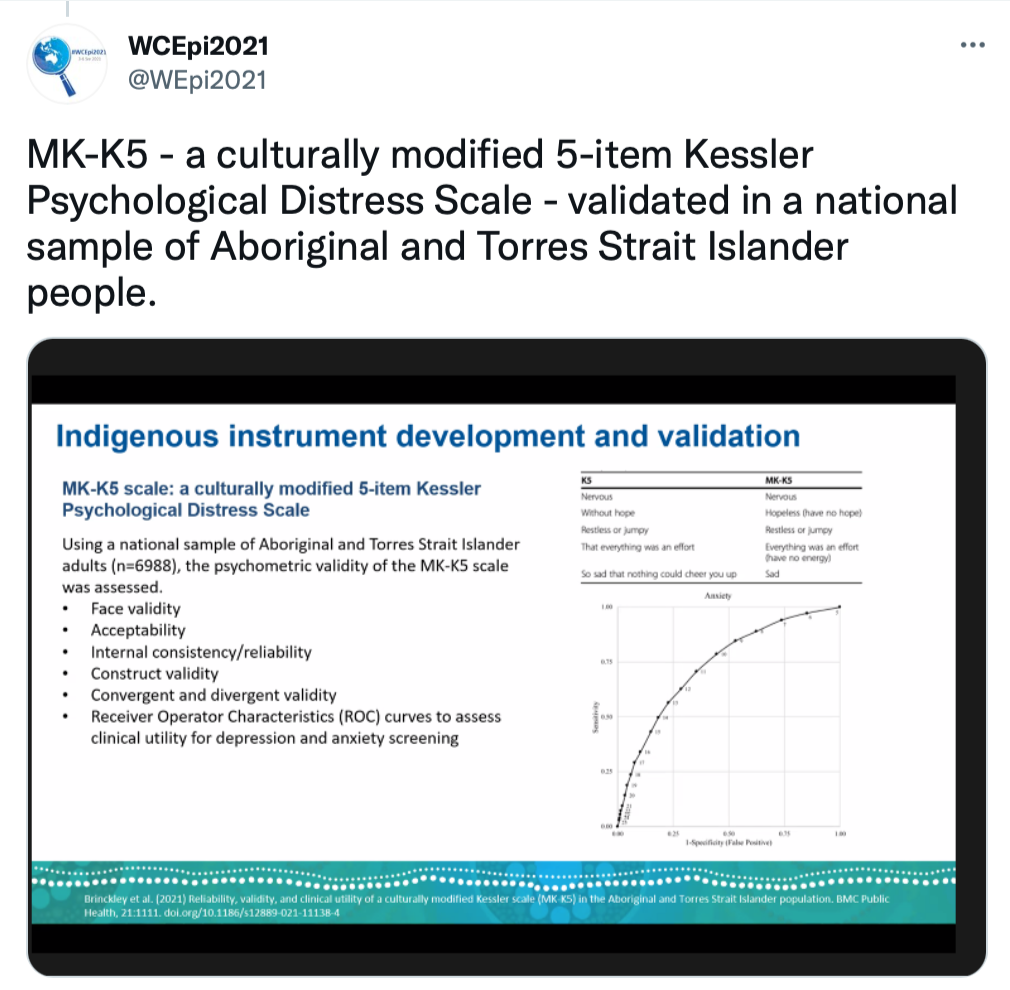 The modified scale – the MK-K5 – includes minor wording changes and clarifying statements from the K5.

“Our validation study found that … the MK-K5, achieved full psychometric validation in the Aboriginal and Torres Strait Islander population and that the cut-offs for referral for treatment and diagnosis should be one point lower that what is currently being used in the health care system,” Brinkley said.

“For an effective health care system, psychometric health and wellbeing measurement tools, like the K5 must be validated in the population they are to be used within. Using measures without knowing if they are valid or reliable, poses risks to patients including inappropriate health screening and mis-referrals for crucial treatment.”

Racial discrimination has been recognised as a critical social determinant of health for minority groups worldwide, including Aboriginal and Torres Strait Islander populations in Australia, said Leah Cave, Data Analyst and PhD candidate at the Telethon Kids Institute and the University of Western Australia.

In a separate session at the WCE, Cave presented the results of a study evaluating the impact of racism on physical health.

She said racial discrimination affected physical health, specifically by causing stress which increased the “allostatic load” on the body.

“Allostatic load is a term to describe the burden placed on the body from the repeated over-activity or inactivity of adaptive systems which are designed to respond to stress,” Cave said.

“Eventually, the repeated dysregulation of these adaptive systems can lead to increased morbidity or mortality.”

Using data from the Aboriginal and Torres Strait Islander Health Survey (2012-13), the research team analysed the health impacts of racism among more than 2,000 people. 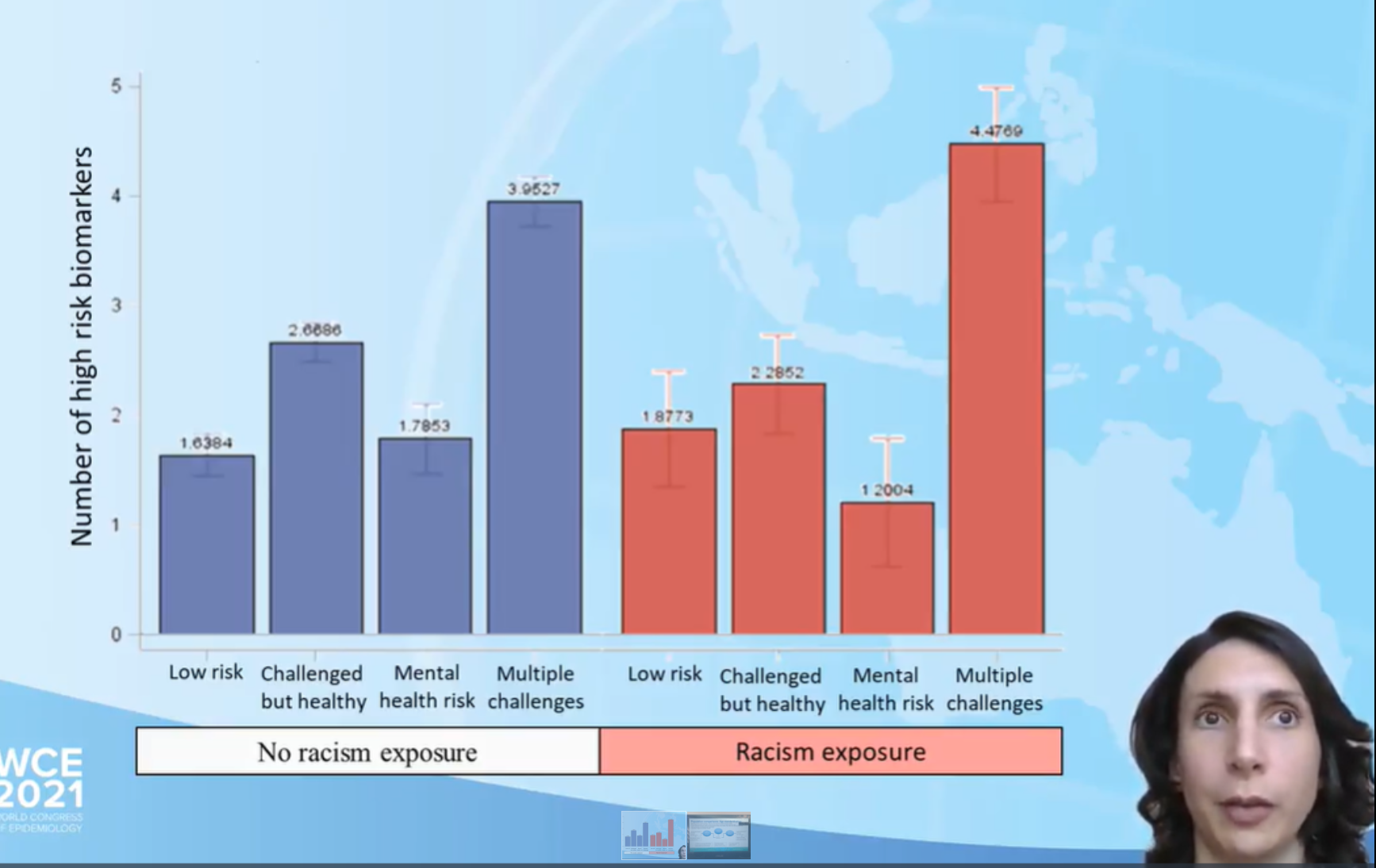 The researchers found that among people exposed to racism, allostatic load was significantly higher in people with multiple challenges (including being at risk of range of health conditions as well as social risks of financial stress, low education and unemployment). Curiously, Cave said, the allostatic load was significantly lower for people with mental health risk who had been exposed to racism.

“But it doesn’t do so alone,” she said, “For those Aboriginal adults already experiencing multiple challenges and poor health, the additional psychosocial stressor of racism can significantly increase their allostatic load. However, those in different circumstances appear to be more physiologically resilient to additional stressors such as racism.

“This finding does nothing to diminish the importance of responding to racism as a social determinant of health. Instead, this highlights that the social conditions of Aboriginal people’s lives must be taken into account when attempting to understand the link between racism and health.” 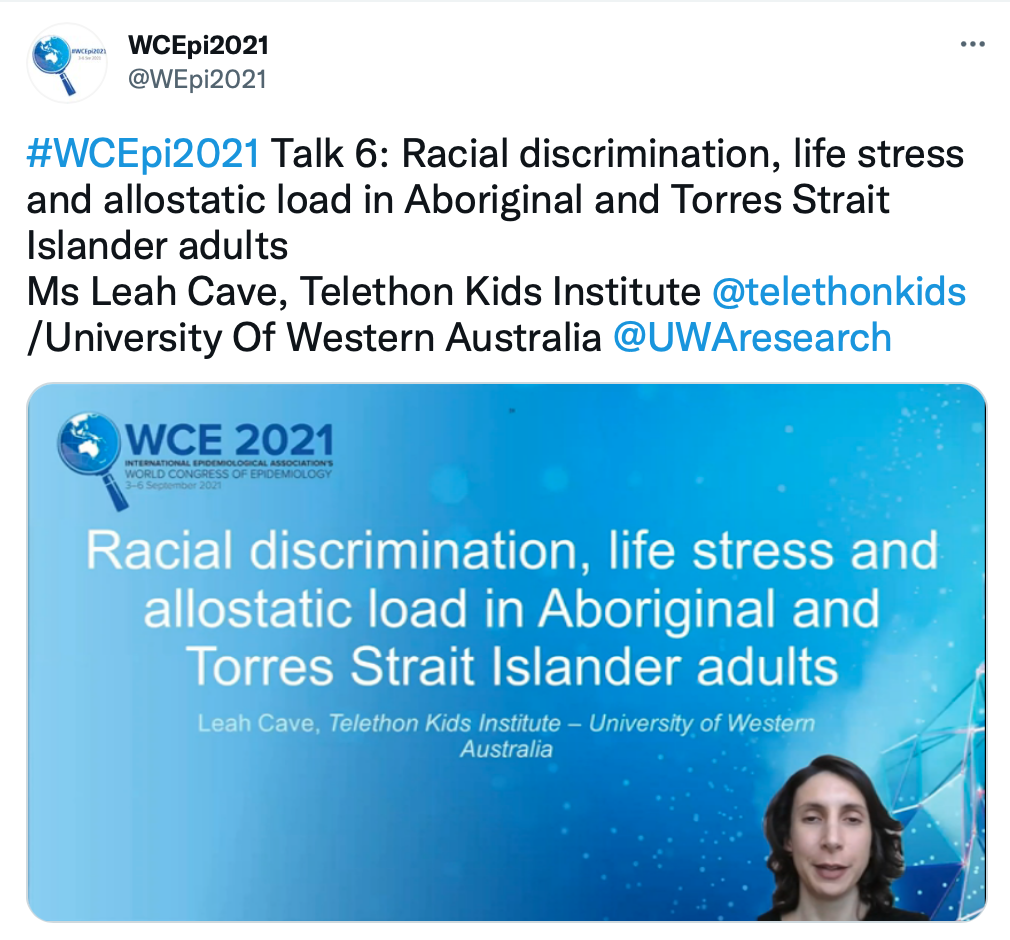 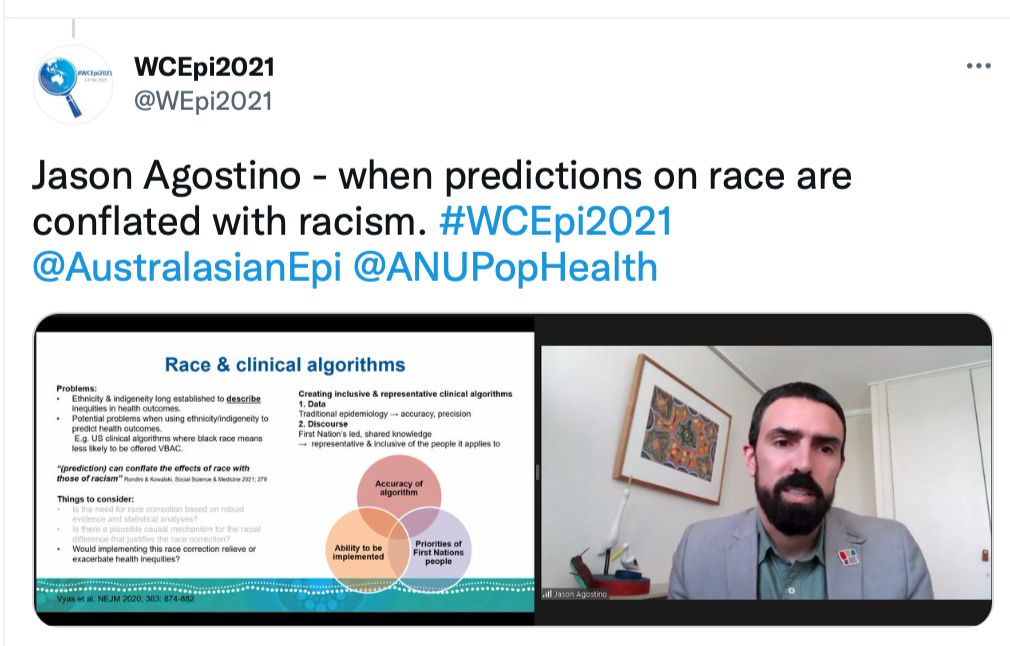 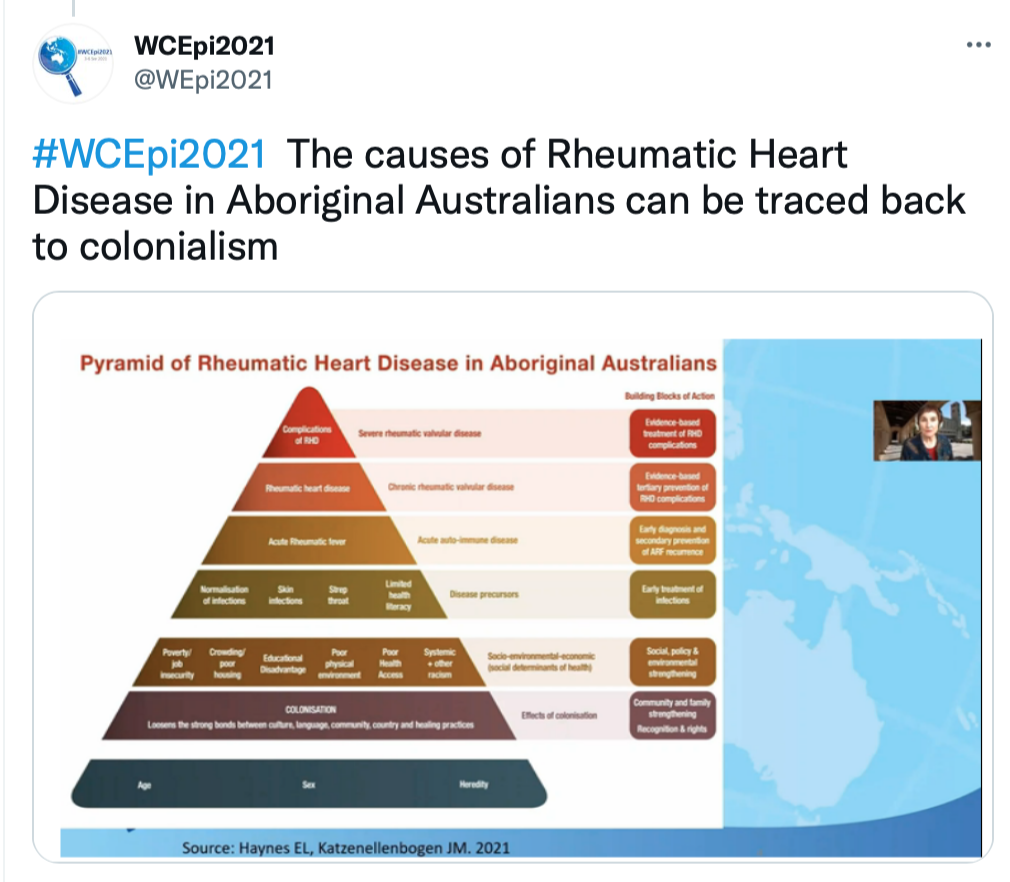 Selected tweets from closing sessions at the Congress 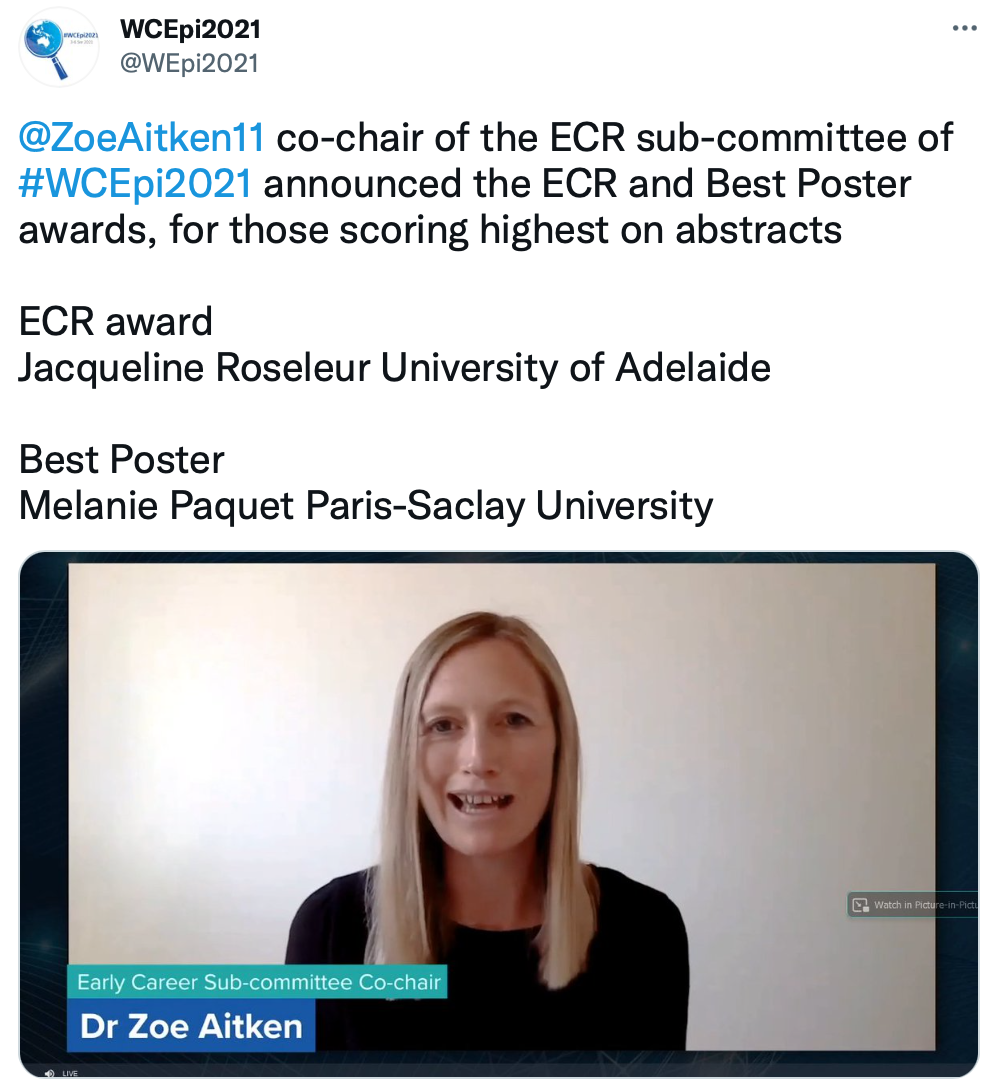 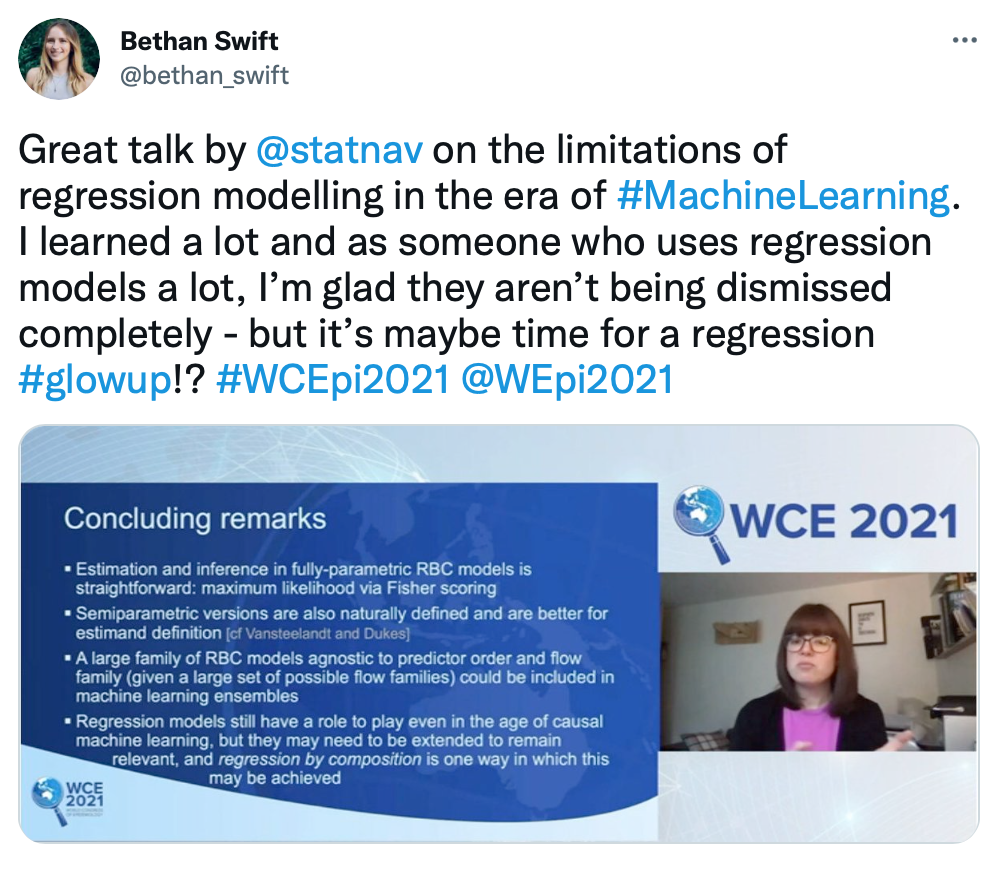 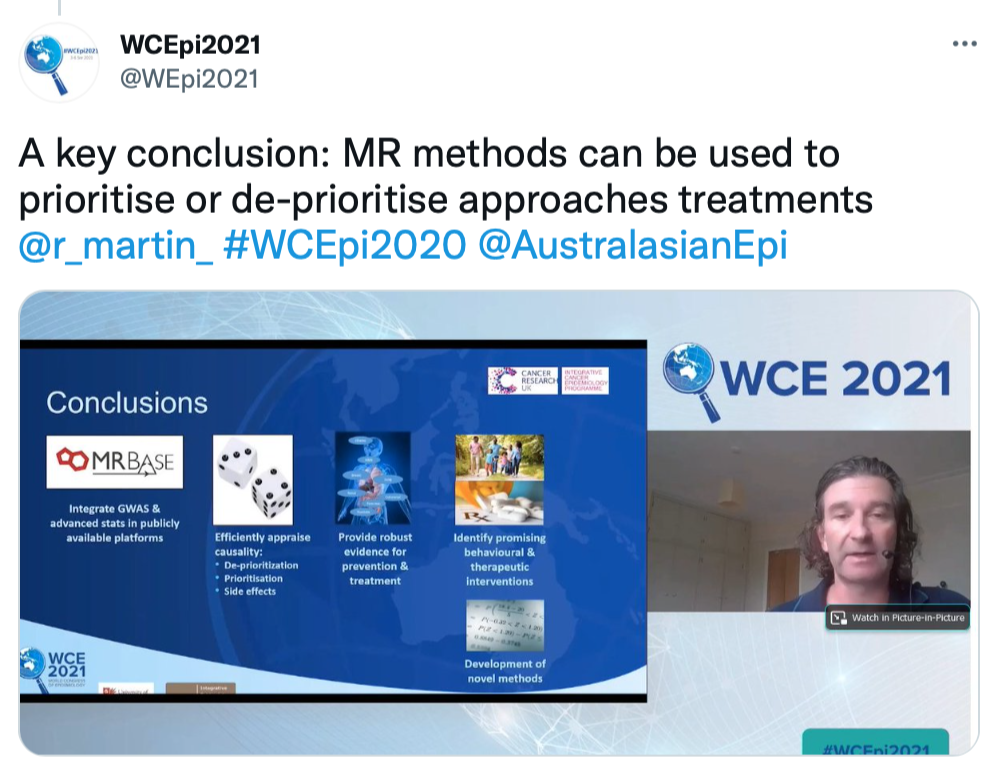 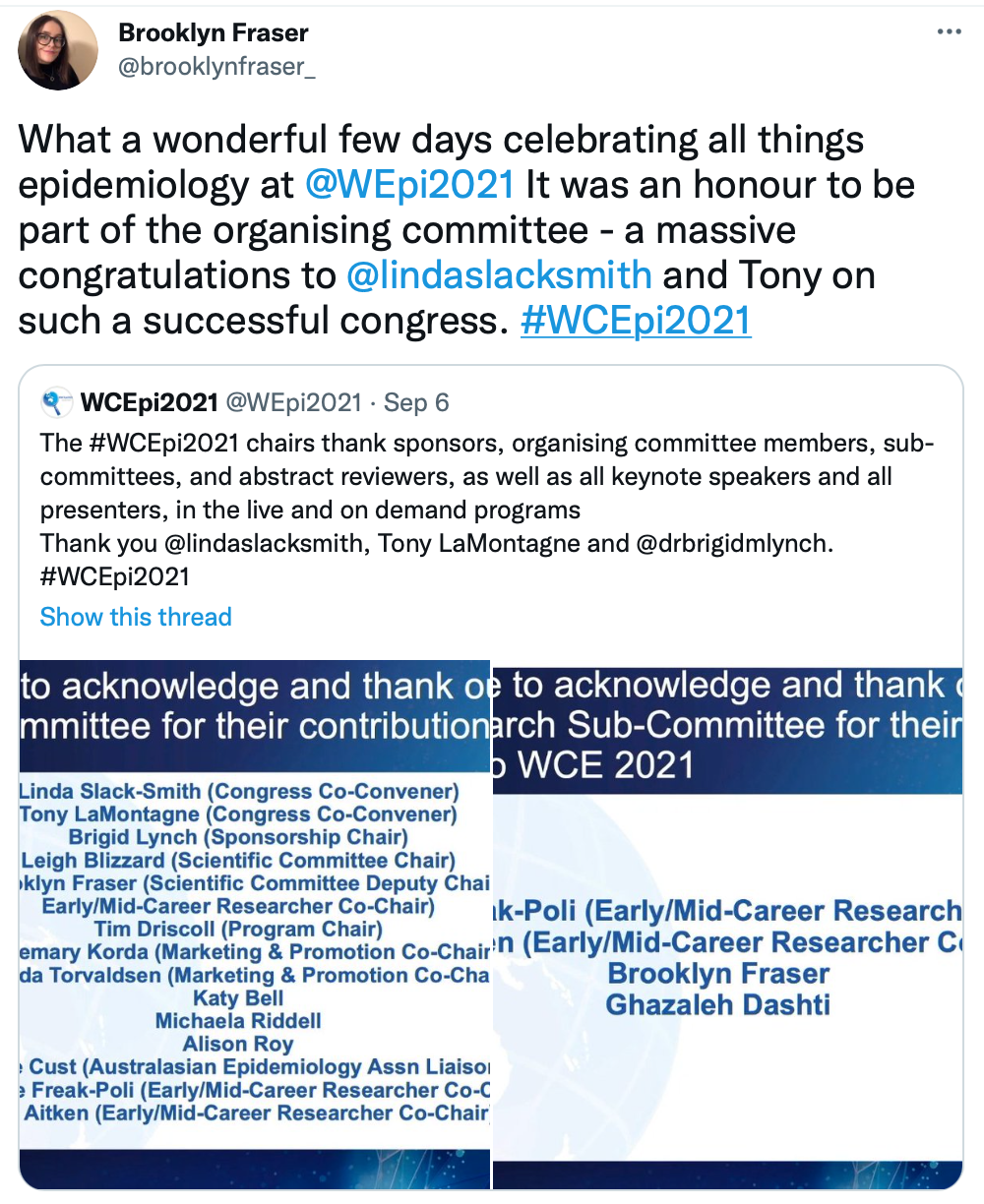 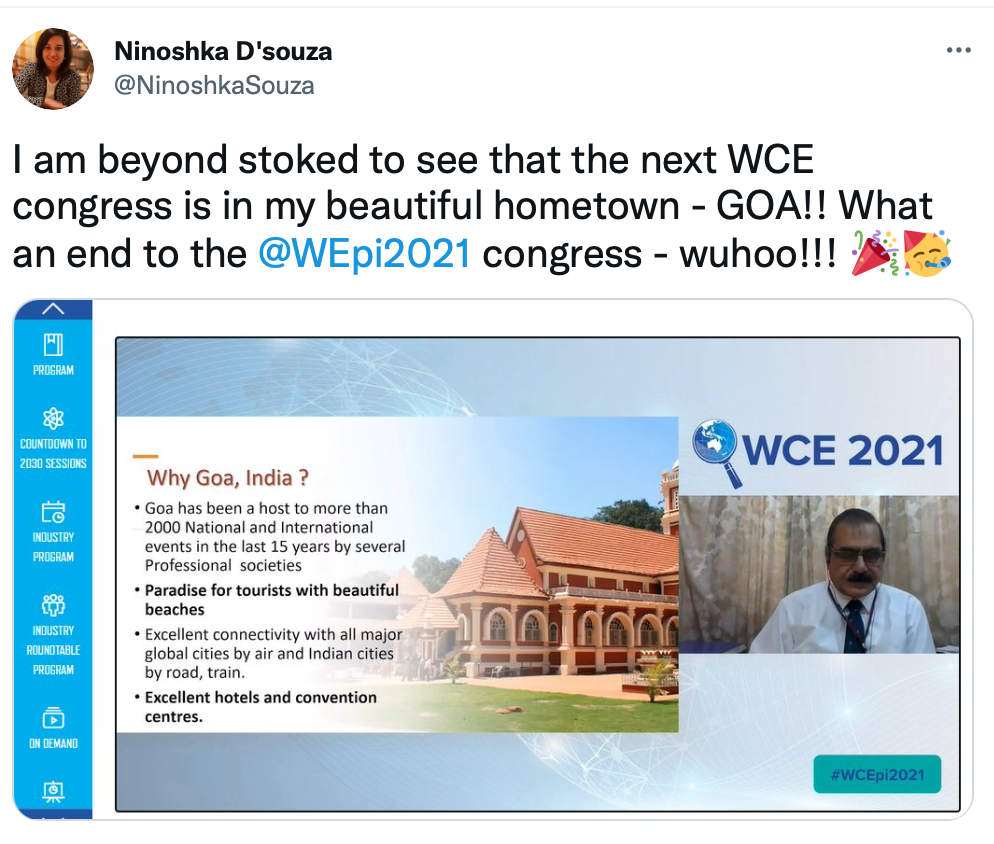 The conference hashtag was used by 839 Twitter accounts, sending a total of 6,233 tweets and creating 51.78 million Twitter impressions, according to Symplur analytics for the period from 31 August – 19 September. 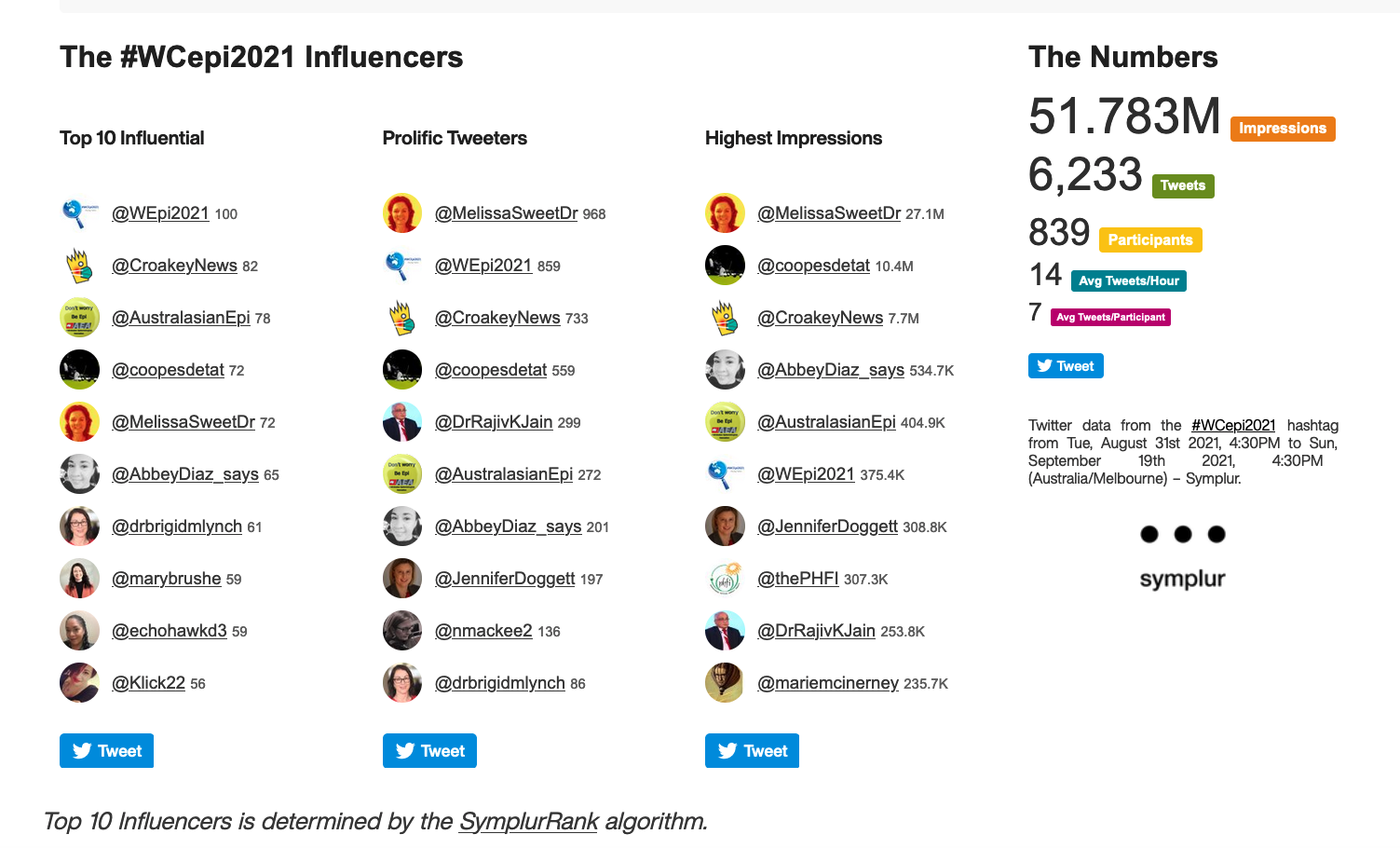 Note for Croakey: This article has been updated from an earlier version published on 18 September.

See our extensive archive of stories on racism and health.

PrevPreviousWhy is the research community silent on such a billion-dollar concern?
NextCOVID in Wilcannia: a national disgrace we all saw comingNext