Photos featured in the Tell My Story: Hearing from the Dads in the Indigenous Birthing in an Urban Setting (IBUS) Study (Supplied)

“Research is a political act of our sovereignty”: Knowledge translation in action

With the Federal Government pledging $160 million to Indigenous-led research as part of a $1 billion commitment to Aboriginal and Torres Strait Islander health in Tuesday’s budget, a forum showcasing success stories in Indigenous knowledge translation could not have been more timely.

The Lowitja Institute — Australia’s National Institute for Aboriginal and Torres Strait Islander Health Research — was among bodies singled out for funds by the federal government for the 2019-20 Federal Budget, winning a much-needed $10 million for scholarships and research.

Though welcome, the commitment essentially restores the Lowitja Institute’s funding to pre-2018 levels, with last year’s package amounting to a funding cut.

The event, #KTthatWorks, trended nationally on Twitter — no mean feat on Budget day. Journalist Marie McInerney was there for the Croakey Conference Reporting Service, and reports below — the first of a three-part series — on a research program that is informing family wellbeing programs in south east Queensland after hearing the voices of Aboriginal and Torres Strait Islander dads.

You can read her preview of the event here, and bookmark this link for the archive of stories as they are posted.

For Dr Yvette Roe, a Njikena Jawuru woman from the West Kimberley region of Western Australia, the emerging power of Aboriginal and Torres Strait Islander research is not only “flipping the narrative” on stories of Indigenous health but the act of research itself.

“Research is a political act of our sovereignty”, Roe told a research forum hosted by the Lowitja Institute in Melbourne that showcased Aboriginal and Torres Strait Islander research projects putting knowledge translation into action in innovative ways.

Roe has led the Tell My Story: Hearing from the Dads in the Indigenous Birthing in an Urban Setting (IBUS) Study, which is now informing the Aboriginal and Torres Strait Islander family wellbeing strategy for the south east Queensland region — an area with a fast-growing Indigenous population.

She described the significant growth in the number of Aboriginal and Torres Strait Islander researchers over the past decade as driving a seismic shift in research, away from centuries of study on Indigenous people to inquiry by and for them.

“What’s happening is we’re actually using research as a sovereign political act, to voice our opinions, to (ask) questions, to advocate for community” she told Croakey in an interview after the event.

“Prior to that, research was often used to oppress us, to exclude us, to describe us in a very deficit model,” Roe said.

Now, she said, her team at the Mater Research Institute at the University of Queensland was working with its partners – the Institute for Urban Indigenous Health (IUIH), the Brisbane-based Aboriginal and Torres Strait Islander Community Health Service (ATSICHS), and the Mater Health Service – on “strengths-based, resilience-focused problem solving”.

“We’re actually flipping that whole narrative, where this research is about advocacy, (and) ensuring community voices are at the forefront,” said Roe.

You can watch our interview with Roe and collaborator Ike Fisher below.

Earlier at the event Lowitja Institute, interim CEO Janine Mohamad said she was proud to be in the room to showcase “three amazing deadly research projects” and to discuss the way the Institute’s research could be translated into more impactful policies and programs that benefit the health and wellbeing of Aboriginal and Torres Strait Islander people.

“It’s about improving the health and wellbeing of our mob,” she told the packed room in Melbourne, introducing herself as a proud Narungga Kaurna woman from Point Pearce in South Australia.

Head of the Congress of Aboriginal and Torres Strait Islander Nurses and Midwives (CATSINaM) until late last year, Mohamed stepped into the role at the Lowitja Institute following the appointment of former CEO Romlie Mokak as the first full-time Indigenous Policy Evaluation Commissioner of the Productivity Commission.

Mohamed talked about what “sets us apart in research” at the Lowitja Institute – where 68 percent of funded research projects are led by Aboriginal and Torres Strait Islander people, and knowledge translation has its own dedicated funding, seeking to move behind the traditional approaches: “publications, conferences and the reports we all love reading”.

The Lowitja Institute got a much-needed funding boost later in the day in the 2019-20 Federal Budget, with $10 million allocated for its research and scholarships program.

Coming on top of a package unveiled last year which essentially amounted to a budget cut, Tuesday’s commitment effectively restored the Institute’s funding to pre-2018 levels.

Mohamed had earlier told Croakey that additional funding was vital for the Lowitja Institute which was “in this amazing space at the moment, throwing off the shackles of being a CRC” under the Department of Industry, Innovation and Science, and moving to Department of Health funding via the Indigenous Advancement Strategy from July 1, 2019.

This shift will mean the Lowitja Institute can work with researchers beyond the 22 institutions it has been partnered with under the CRC, a spokeswoman told Croakey.

We look forward to expanding our work in key research areas such as the cultural and social determinants of health, and health system improvements for Aboriginal and Torres Strait Islander people.

We also look forward to continuing to build the Aboriginal and Torres Strait Islander health research workforce, and growing our national and international networks. Our innovations in knowledge translation will ensure the ongoing positive impact of our research.”

Yarning as method and therapy

Innovative use of yarning circles was at the core of research into Aboriginal and Torres Strait Islander fathers detailed at the forum by Roe and collaborator, Ike Fisher, a Birri Gubba and Gubbi Gubbi man from Queensland who also has links to Darnley Island in the Torres Strait.

Driven by concern that the voices of Aboriginal and Torres Strait Islander dads are often not heard as part of broader research into the health and wellbeing of their babies, the project defines yarning as “a form of culturally respectful conversation that is conversational, narrative-based and prioritises Aboriginal and Torres Strait Islander peoples’ stories”.

Yarning was central to the project from the outset, with yarning circles initially held with Aboriginal and Torres Strait Islander male service providers who are fathers to identify strategies to engage with participants, and ways to stay engaged with them to beyond the birth of their children.

Using his skills as a community researcher, Fisher led yarning sessions with the participants to put the research questions to them, about their fears, hopes and aspirations, and what supports they needed and wanted.

The sessions worked at multiple levels, Fisher said. As a social framework, they served to make a connection with the fathers, identifying their cultural connections and hobbies and interests and “creating that calm environment for them to share their story…an environment where they feel comfortable to open up, (where) it’s not an interrogation, it’s safe for them”.

That often shifted into a therapeutic space, with a number of participants sharing stories they had not previously told others.

Once those yarns were had, the responses were analysed using qualitative methodology that privileged the men’s lived experiences — the range and breadth of which were deeply varied, Roe and Fisher said.

Some had been incarcerated or were going through the legal system, had been homeless and were taking on drug and alcohol addictions; others had career pathways and stable backgrounds.

“No matter what their background or upbringing… they were wanting to be the best fathers they can be, to be the providers and protectors for their families, and they were seeking support to do that,” Fisher said.

The information that was gathered and analysed was then taken back to the participants to “make sure it was true to them”.

“We are very much custodians of their story,” Roe said.

So too is the community, with the findings shared at targeted events including a Deadly Choices golf day and a fathers’ barbecue at a Mums & Bubs event. 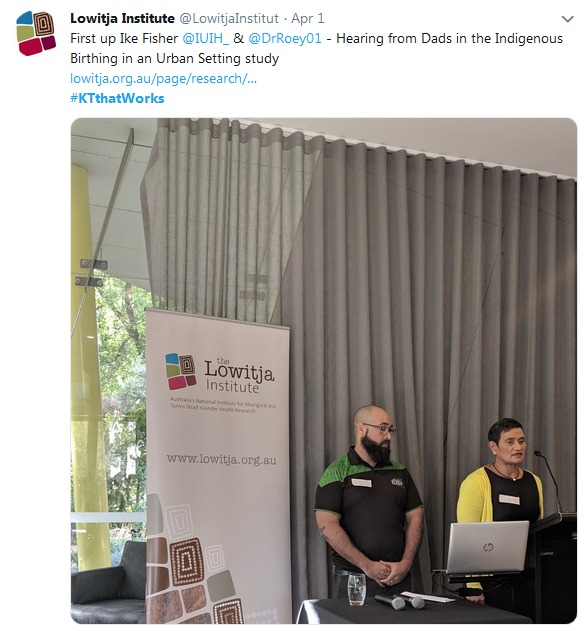 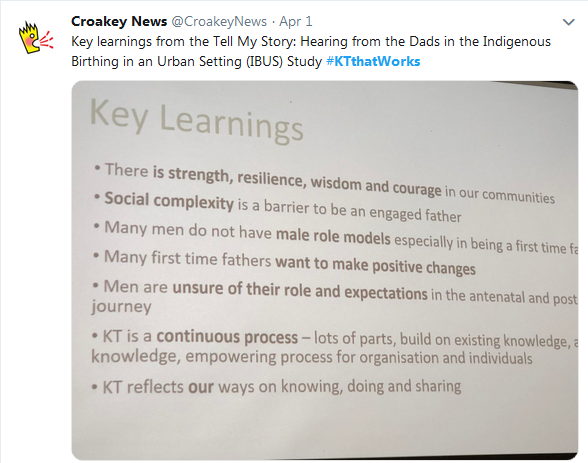 Roe and Fisher said the project has had tangible outcomes, including the creation of a ‘Dads Wall’ of photos of fathers and their children at the Mums & Bubs centre, plans to run similar Dads & Kids events to sustain connections between fathers, and the integration of men’s health in the IUIH family wellbeing strategy.

“Our community is tired of just talking all the time. They want to see outcomes, they want to see ‘what does this mean for me, for my son, for my grandchildren’.

“That’s what’s exciting about knowledge translation because our communities have now got a framework that can do that.”

For Fisher, the key lesson is that community has always got the answers.

“You’ve got to listen and do it in a way that they feel comfortable sharing. But you also have to share it back to them. You can’t hold that information (away from them). That’s what the importance of knowledge translation is.”

The discussion trended Australia-wide on Twitter on Tuesday, garnering 1.75 million impressions. We’ve clipped some of the action below. 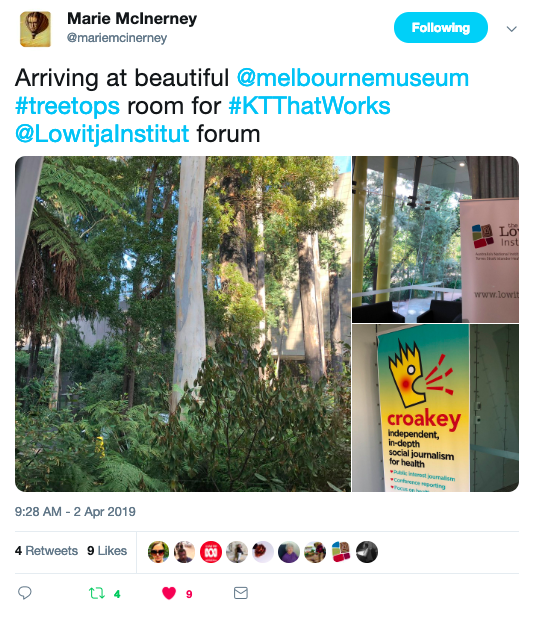 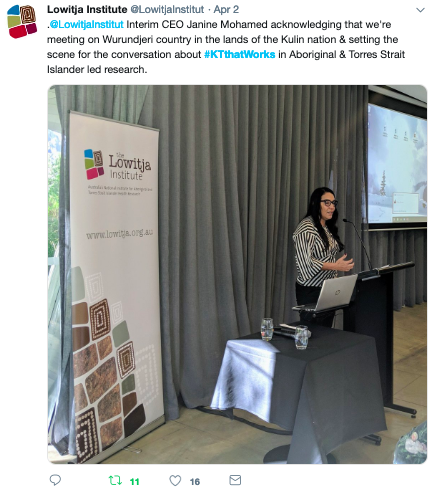 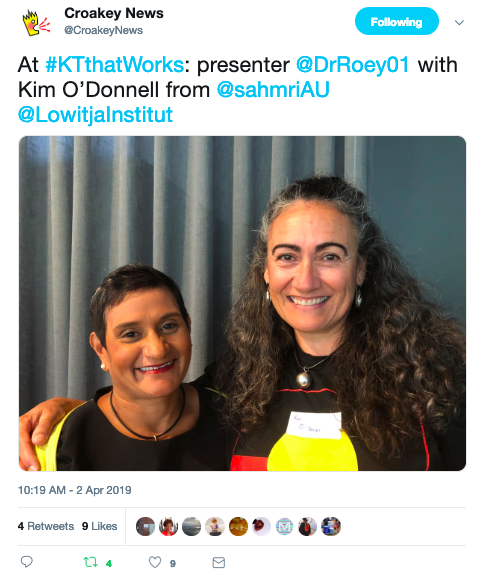 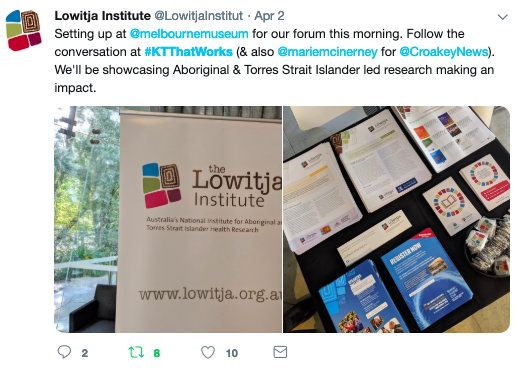 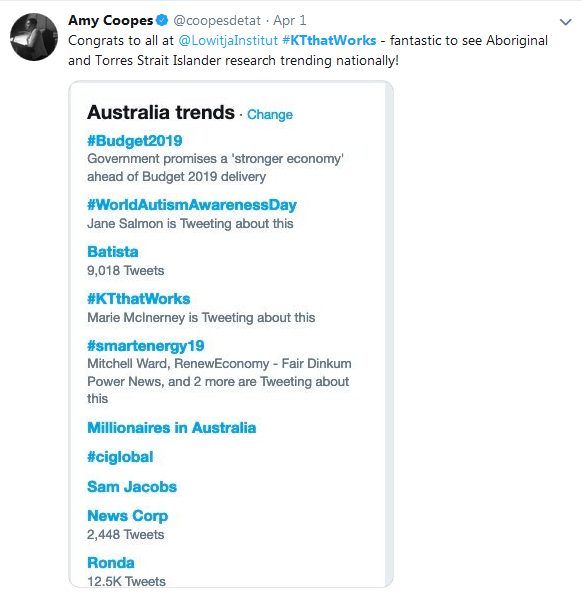 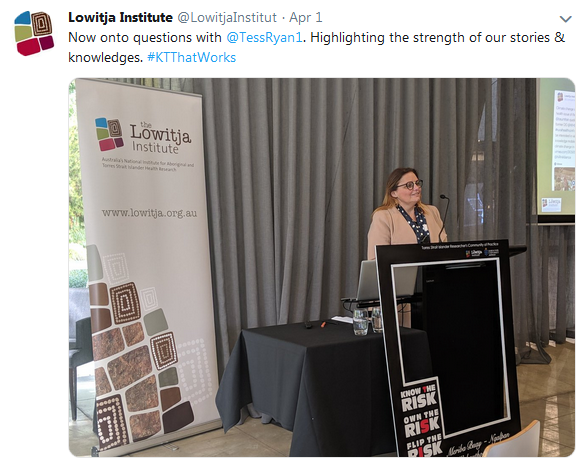 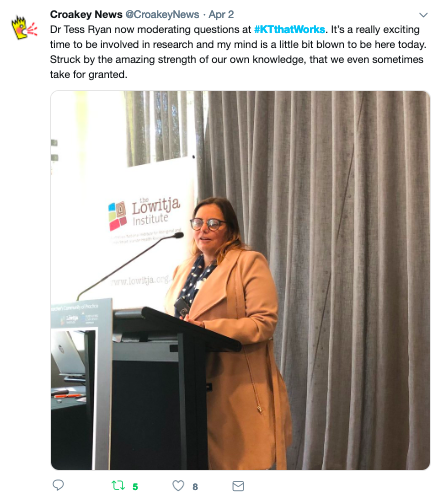 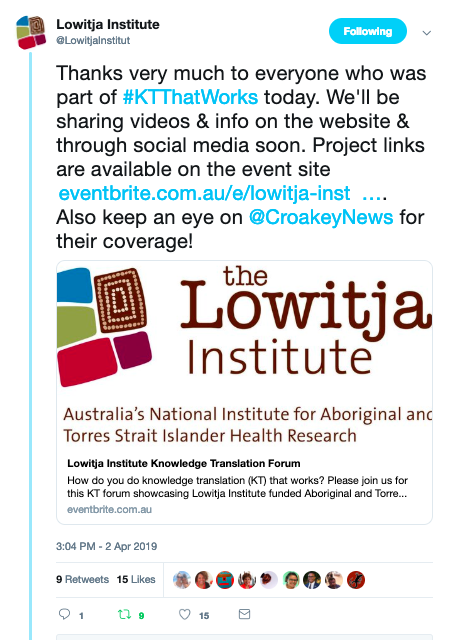 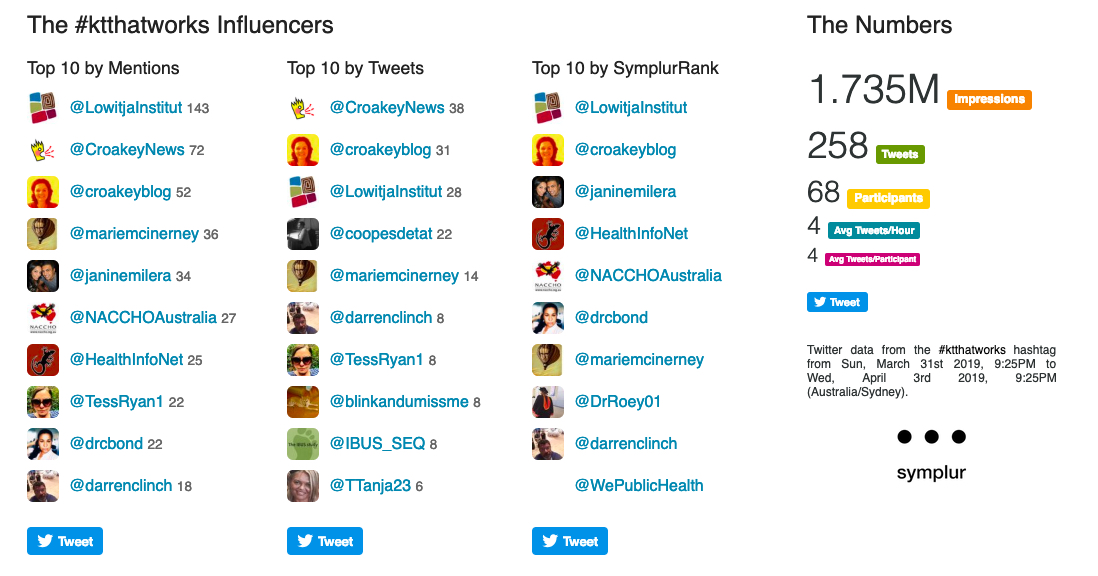 You can watch our preview interview with Janine Mohamed, recorded ahead of the Federal Budget, below.