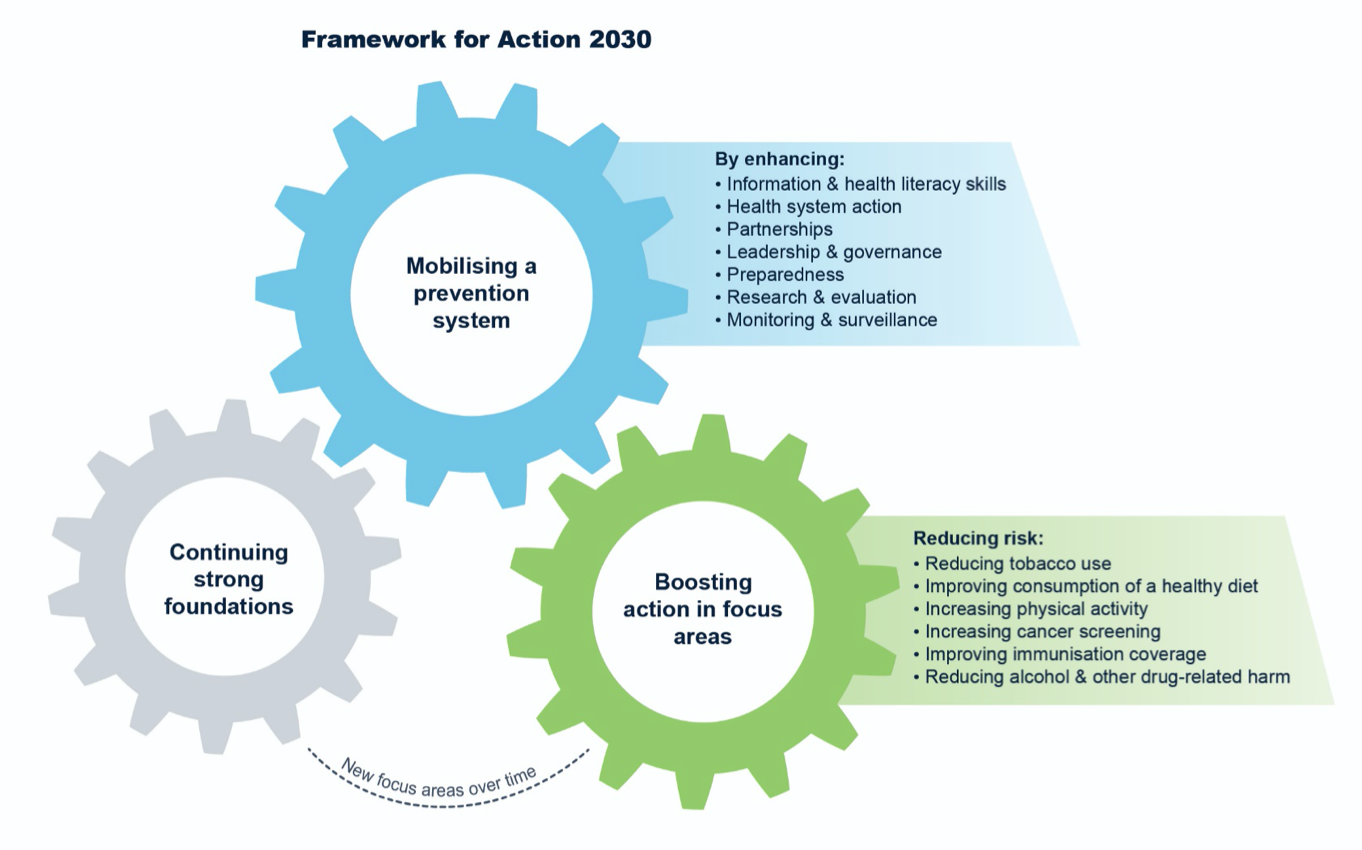 The lack of focus in last week’s Federal Budget on prevention highlights the low levels of awareness within government of the importance of health promotion, public health and social determinants.

This is disappointing given the strong support from stakeholder groups for an increased focus on prevention in their submissions to government on the “Development of a National Preventive Health Strategy” consultation paper.

These submissions highlighted the need for a comprehensive and robust strategy to address the drivers of illness and disability, including income inequality, climate change, racism and childhood trauma.

Below, Croakey editor Peter McInnes provides an overview of submissions from key health stakeholder groups and discusses their implications for the ongoing development of the strategy.

Consultation on the Australian Government’s paper “Development of a National Preventive Health Strategy” (The Paper) closed at the end of September. The Strategy, when finalised, will be a critical initiative to creating a healthy Australia.

Some submissions felt that the Paper had fallen at the first hurdle through its use of the term “preventive health”:

“The very notion of ‘preventive’ health is flawed – health is something to be promoted not prevented.”

Support for the Strategy

However, overall, the broad range of publicly available submissions surveyed by Croakey welcomed the development of the Strategy, singling out a range of positives including the:

Nonetheless, widespread concerns were raised about critical gaps including climate change, Aboriginal Torres Strait Islander peoples, and the social determinants of health.  There was also a concern that the language too often emphasised the individual’s role in making choices to improve their health and the downplaying of structural determinants which heavily constrain “choice” for the most disadvantaged in Australia.

The Paper identifies those with “more needs” as being a priority for the Strategy.  However, there is a lack of clarity throughout on who might be included in the “more needs” group.  The Paper specifically highlights rural and remote consumers in the proposed Strategy’s goals, but the George Institute recommended:

…removing “including those in rural and remote settings”. There are several areas of focus needed, and isolating one highlights that over others.

…use of the phrasing “different sectors” is not specific enough in conveying consideration of the social determinants of health. We recommend explicitly including education, employment, housing, transport, social services and environment.”

The RACGP submission also criticised the failure of the Paper to articulate who was more needy and its emphasis on individual choices rather than structural barriers to improving health:

“The vision fails to recognise the diversity of Australians and the issue of inequity. A national approach to prevention should also focus on reducing disparities and inequities through addressing structural disadvantage that affects quality of life and health outcomes.

Furthermore, the reference to ‘personal circumstances’ in aim three needs to be removed. Framing inequality as a personal choice risks blaming individuals and fails to acknowledge that many of the determinants that lead to inequality are outside of the individual’s control.”

Significantly the RACGP calls for the Strategy to specifically address income inequity through taxation, as well as employment, the quality of working environments, access to education, adequate housing and transport.” 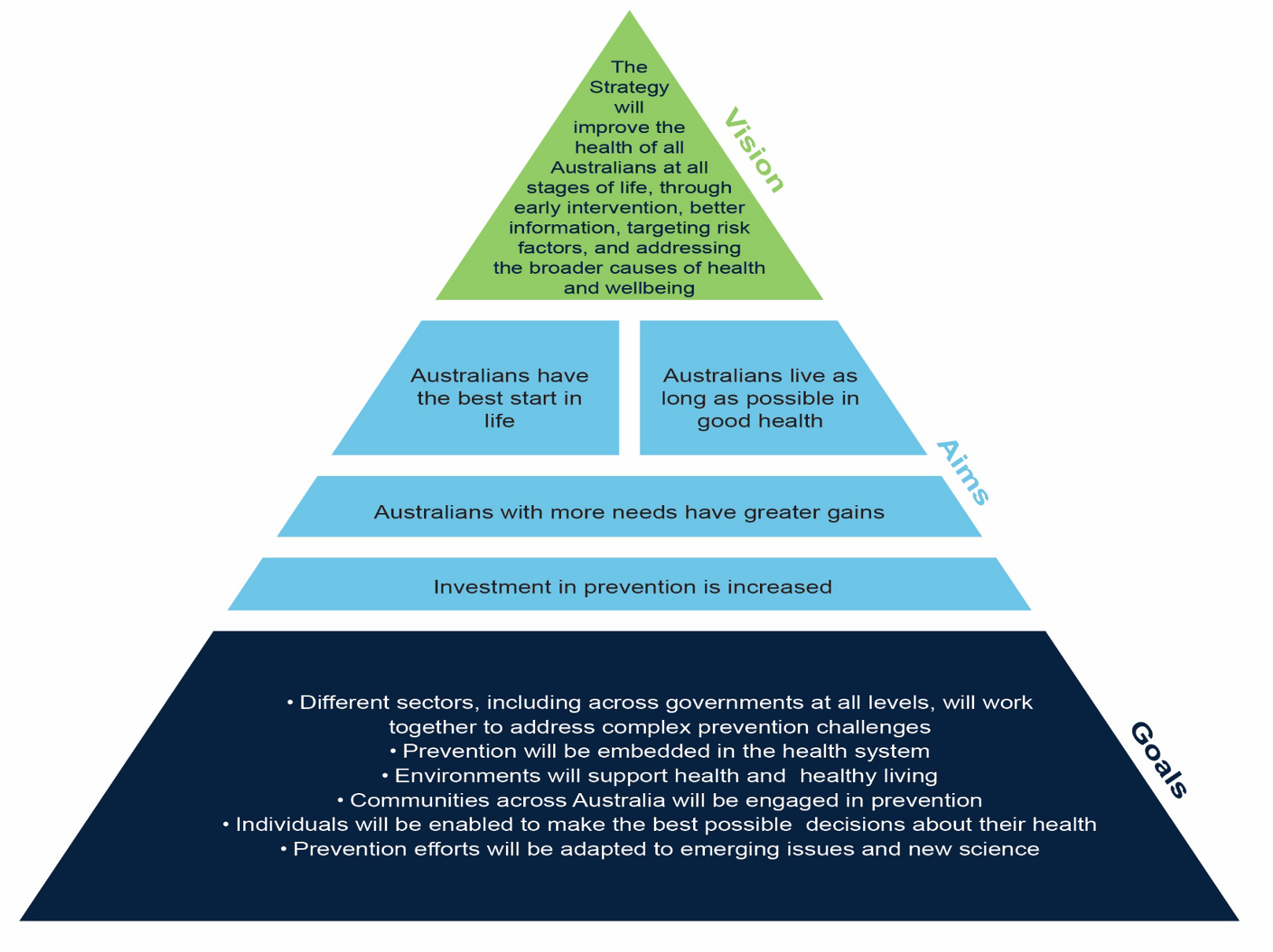 A range of submissions highlighted the inadequate treatment of the important health needs of Aboriginal and Torres Strait Islanders in the Paper:

Aboriginal and Torres Strait Islander people experience a burden of disease that is 2.3 times the rate of non-Indigenous Australians yet clear action and ways of working with communities to prevent this is insufficiently articulated throughout.”

In the context of Aboriginal and Torres Strait Islander health, good health and wellbeing can be associated with cultural integrity, connection to country, community empowerment and self-determination. An approach that recognises the unique place of Aboriginal and Torres Strait Islander peoples would consider issues such as the loss of Indigenous languages, over-incarceration and environmental degradation.”

The climate crisis and the environment

The failure to recognise climate change in the Strategy saw thirty health organisations sign a joint statement in September arguing that “climate change must be a central health feature of any national health strategy”.  Many submissions registered concern and endorsed this idea. More broadly, submissions noted the central importance of the environment in improving health.

Environmental conditions are noted in the paper, but only in terms of their role in supporting human health and healthy living. Not considered is the urgent need for government reform to protect those environments that provide the fundamentals of good health – clean air, clean water, food security and a stable climate….

The absolute dependence of health on healthy environments is clear. Biodiversity loss, through the destruction of ecosystems and accelerating climate change, has profound impacts on human health and wellbeing.”

Doctors for the Environment Australia

Submissions welcomed the commitment to increased funding for health prevention and noted that it will be critical for the success of the Strategy but appeared sceptical on whether this would be honoured.

The consultation paper is correct to point out the achievements of past public health programs to reduce tobacco use, screen for cancer, provide immunisation, and minimise HIV deaths. A common theme in all successful past public health initiatives is that they were based on significant, sustained resourcing. Strategic expressions of intent alone are not sufficient; it is unrealistic to expect individuals, community organisations, or businesses to commit to actively supporting the goals in the NPHS without significant new public resourcing.

Increased investment in health promotion and preventive care, through general practice, will keep patients healthy and well. The best place for the community is out of emergency departments, hospital clinics and beds, residential aged care facilities and specialists’ consulting rooms. However, GPs require additional support to fulfil their roles in preventing sickness and keeping our community safe and well to the best of their ability.

A number of submissions expressed concern at the failure to address mental health in the Strategy. The Australian Healthcare and Hospitals Association noted:

The interconnected nature of mental and physical health is not well recognised in the consultation paper for the Strategy. The identified focus areas reinforce a long tradition of prioritising physical health indicators over mental health.

Therefore, while actions such as increasing physical activity and reducing alcohol and other drug related harm will go some way to enhancing Australia’s mental health, the impact will be marginal compared to the beneficial impacts of these activities on physical health. Recognising the importance of primary prevention that targets psychological risk factors within the Strategy, such as childhood trauma, bullying, racism, homelessness and poverty, is likely to have significant benefits on both mental and physical health.”

Mental Health Australia’s submission expressed concern regarding the level of consultation with their sector:

Consultation to date has consisted of eight topic-specific workshops, where the level of involvement of mental health experts is unclear. Further, although many of the organisations represented on the Expert Steering Committee for the Strategy have a strong interest in mental health, none are exclusively focused on this area.”

Terry Slevin, CEO of the Public Health Association of Australia, condemned the “terribly disappointing” coronavirus recovery-focused federal budget and called on “…all governments, federal, state and territory to make the health and wellbeing of our nation, from both chronic and communicable disease, their number one priority for future budgets, starting in 2021.”

This does not bode well for the Strategy given one of the biggest spending budgets in living memory ignores health improvement measures completely. The budget deepens inequality with the its signature measure of tax cuts to the wealthy, which overwhelmingly favour the already comfortable.

Given the powerful influence of income and wealth inequality on health outcomes, particularly for the most vulnerable, the National Preventive Health Strategy’s clumsy title may unfortunately signify an appropriate and uncharacteristically honest representation of the long-term impact of the Strategy’s efforts to improve Australia’s health.