Marie McInerney reports from the the 42nd Annual Conference of the Public Health Association of Australia (PHAA):

We’ve got the evidence. So how do we achieve change?

“Look to what has worked” was the message from Professor Mike Daube, director of the  Public Health Advocacy Institute.

They’re the lessons he and others have accumulated in a 40 year fight against smoking that culminated last year in the implementation of plain packaging for tobacco products. 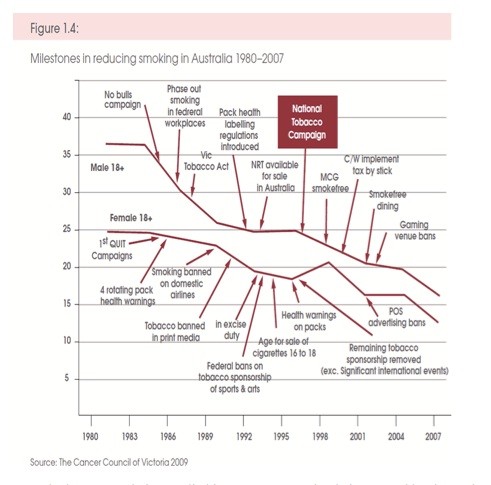 Now the lessons are being applied in a newer campaign being waged by the National Alliance for Action on Alcohol (NAAA) – a coalition of 75 organisations, including drug and alcohol services, health peaks, law and order agencies, and local government which is being led by Mike and Todd Harper, CEO of the Cancer Council of Victoria.

Together Mike and Todd delivered a Masterclass in Advocacy session at the PHAA conference on the lessons learnt, not just from the campaign to reduce smoking, but also successful work on road safety and HIV AIDs.

It came with plenty of quotable quotes: ‘What do we want? Evidence-based change. When do we want it? After peer review.’ 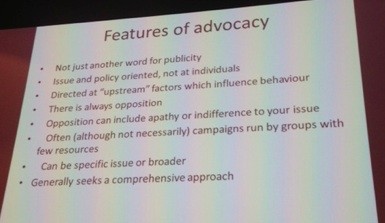 The workshop was timely, coming after keynote addresses from PHAA President Heather Yeatman and Green Senator Richard Di Natale about the risks to public health under a Coalition Government with stronger ties to industry, and cuts planned for foreign aid and the public sector.

The session also spoke to the conference’s theme of a fair go for health. Todd Harper said: “We know tobacco and alcohol differential pricing is to take advantage of low SES (socio-economic status) populations, there’s a track record of targeting vulnerable groups.”

Other advice included “be bipartisan”. It’s important to recognise the reality of political cycles, where the Opposition is likely to be in Government one day, so it’s important to develop relationships on all sides.

While acknowledging the decades of work by many researchers, policy developers and advocates, Mike says former Labor Health Mininster Nicola Roxon “is the person who gets credit above all” for plain packaging.

But he also points to the vital role of Liberal MP Dr Mal Washer when he famously broke ranks on the issue – “I support these reforms unequivocally and whatever my party decides to do, I don’t give a shit” – which helped finally the Opposition over the line.

For tobacco advocates, light bulbs switched on when one-third of the tobacco industry’s response to a discussion paper focused on the plain packaging proposal. “We learned from the enemy…it clearly had huge implications for them,” said Mike, dubbing the moment being ‘alert to the scream’.

Whether or not to work with the alcohol industry – to see it as part of the solution not just part of the problem – was an issue the NAAA faced. It asked itself a series of questions:

With ‘no’ being the answer, “we made the decision not to have a relationship”, Mike said. 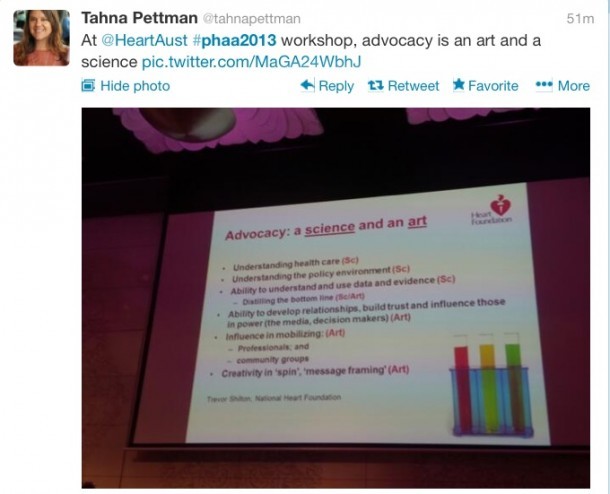 In other conference news

Greens Senator Richard Di Natale warned that Australia is chipping away at the long-held belief in a health system based on principle of universality and, with rising out-of-pocket health costs, is moving towards a “US style two-tiered health system”. The $5 billion in public funding now put towards private health insurance is “a massive redistribution away from the people who can least afford it.”

However, he said he was “not as pessimistic” as some about Prime Minister Tony Abbott’s potential in public health, saying there was possibility for progress on issues like increasing the Newstart allowance and support for sole parents. “It’s an opportunity for the PHAA to say they are health issues as much as social justice issues.”

He also sees “a little crack of light” on moves towards a Medicare funded dental health care system, which Mr Abbott described as “aspirational”. Senator Di Natale said: “We’re going to hold him to that.” 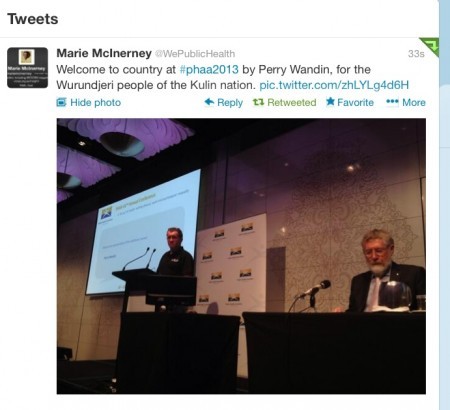