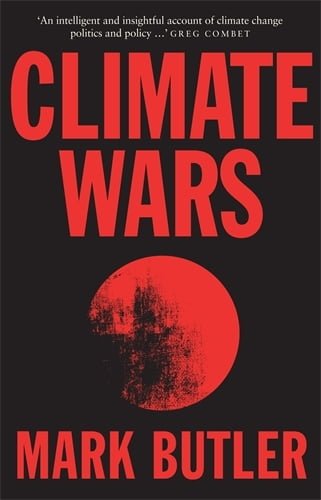 Croakey recently featured a call to arms on climate change policy from Mark Butler, Opposition spokesman for climate change and energy, following the launch of his book Climate Wars.

In her review of the book, Dr Rosalie Schultz, from Doctors for the Environment Australia, welcomes its currency and accuracy. But she notes Butler’s determination to continue to wage the political war on climate change, and lack of acknowledgement of Labor’s failures and restraints. Thus, she says, the book loses an opportunity to “address the climate conflict through a transformative approach”.

In Australia’s climate wars, Mark Butler is a general, fronting the ALP army. Butler is Shadow Minister for Climate Change and Energy, and his position determines his perspective of the wars. From the perspective of an army general, Climate Wars provides detailed information on many aspects of his portfolio. The currency and accuracy of the book are impressive.

The opening chapter “Making Sense of Climate Change” is a concise but comprehensive review of the science of climate change. Butler outlines both fundamentals of the science, and projected impacts of climate change in Australia. We face many risks: increasingly destructive bushfires, extreme heat, impacts on water supply and agriculture, rising sea levels and coastal erosion, negative economic and financial impacts, regional instability and threats to our national security.

Subsequent chapters detail Butler’s approach to diverse elements of his portfolio: Australia’s energy sector, manufacturing and mining, land management, low carbon communities, transport and how we can transition to a low-carbon economy. Butler shows his concern for a just transition process that ensures people have access to affordable electricity, and on-going rewarding employment. There are clear statements of ALP commitment to the wellbeing of both the environment and workers. They include:“Our commitment to ensure 50 per cent of Australia’s electricity is renewable by 2030 will see a steady program of building and job creation through the 2020s as our ageing coal-fired stations are replaced with modern, clean energy.” (page 90).

However, Butler writes as a politician in a country at war over climate. Australians are at war against both the reality of climate change and with each other about how we should respond.

Butler’s Climate Wars highlights the contrast between Australia’s divisive approach to climate change policy and that of the UK, where agreement about the science and collaboration between all sides of politics since the 1980s have led to effective policies and arguably control of emissions.

Yet despite describing how collaboration has occurred in UK, Climate Wars doesn’t reach out towards collaboration in Australia. Rather it fuels ongoing battles. “… the Greens Party inexplicably delivered [Abbott] an enormous strategic victory, voting with him to defeat Rudd’s Carbon Pollution Reduction Scheme. This short-sighted tactical manoeuvre has hamstrung long-term climate action for almost a decade.” (page 28).

The book blames Liberal and Green party politics for our current situation, but there is no acknowledgement or discussion about misjudgements made within the ALP. Nor is there  frank discussion about the influence of different contributors to Liberal Party policy, who may have also impacted on ALP policy. Furthermore, the book doesn’t acknowledge the inherent conflict in Australian society, which is based on a destructive relationship with the environment that sustains us. Such acknowledgement would recognise that climate change is only one of many impending environmental crises, and that major social change is needed.

Butler’s approach limits his perspective and capacity to criticise ALP decisions, such as Rudd’s laughable target of 5 per cent emissions reduction, and the ALP’s confused position on supporting Adani to mine enormous amounts of coal. Thus, the book loses an opportunity to address the climate conflict through a transformative approach.

Butler supports the fundamentals of economic rationalism and the idea that the “Australian economy is experiencing a de-coupling of carbon emissions from economic growth” (page 56). This is the myth of decoupling economic growth from emissions growth, which ignores the fact that there are absolute limits to planet earth. Butler also propounds the nonsense that Australia can support a much larger population because of the extent of our arable land and amount of freshwater (page 150). This omits the facts that most of our food produce is exported, and that food production in Australia already faces challenges from climate change, land degradation, and competition for land and water from mining and urban expansion.

The strength of this book is the challenge it places on Butler and the ALP to implement effective climate policy when they return to power. The book would be further strengthened by acknowledgement that the ALP has misjudged some aspects of climate policy, and that action on climate change must engage all sides of politics. Without such acknowledgements, I worry that the book contributes to the Madhouse effect: how climate change denial is threatening our planet, destroying our politics and driving us crazy.

PrevPreviousHealth leaders, services, researchers call for welfare drug testing to be scrapped
Next7 tactics that unhealthy industries use to undermine public health policiesNext