Reviewing a brilliant series from Vice – “Over Represented”

Amnesty recently partnered with Vice Magazine to screen their powerful three-part series that looks at Aboriginal and Torres Strait Islander experiences of the justice system in Australia – Over Represented.

The series presents three snapshots from around the country of Aboriginal people visiting, being caught up in, and working in the justice system. Throughout the series, Vice lets these people do the talking – no voice-overs or corny analysis. 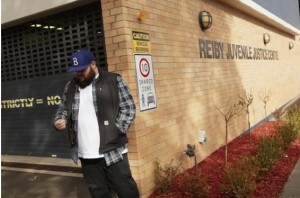 The series kicks off by following Yorta Yorta rapper Briggs as he visits kids in juvie in south-west Sydney.

As one of the staff at the Reiby Youth Detention Centre points out, 60-70 per cent of the kids (aged 10 to 17) at the centre are Aboriginal. Aboriginal kids make up about 5 per cent of the total population in this age bracket – the over-representation is staggering.

The most compelling thing about the series opener for me is it shows that the boys at Reiby are just kids. Too often that gets lost in the abstract talk about the stats and ‘juvenile justice.’

Briggs puts it well when he says that “there’s a lot of potential behind this razor wire.” That potential is far too often overlooked to the detriment of these kids and the rest of us too.

Briggs has an amazing rapport with these young fellas. It seems like it comes from a place of mutual respect, and from his understanding of where they are coming from and what they might have been through.

You can sense how much Briggs cares about these kids and wants them to recognise that potential and succeed – as Briggs himself is succeeding. 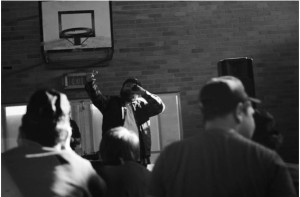 As a long-time local hip hop fan, I first saw Briggs on stage as hype man for Melbourne hip hop icon ‘Reason’ maybe 10 years ago. He had plenty of stage presence even back then.

But I didn’t have any inkling of how much of an impact he would have on the hip hop scene, on young guys like those at Reiby, or on me for that matter.

Since then, Briggs has grown in stature and confidence to the point where he is now a role model and emerging leader.

Like many people, I was blown away by Briggs’ homage to Archie Roach released this past NAIDOC week: The Children Came Back. It is an awesome celebration of some remarkable Aboriginal leaders and legends: from Sir Douglas Nicholls (and Lady Gladys Nicholls in the film clip) to William Cooper, Cathy Freeman and Adam Goodes.

I was lucky to also recently catch the Melbourne launch of Briggs’ music label: Bad Apples. The label roster is made up of eloquent and outspoken young Aboriginal rappers whose talents Briggs is helping to cultivate and whose voices he intends to amplify (Nookie, Philly and Birdz). Also under Bad Apples is his own collaboration, the A.B Originals, with fellow Trials from Adelaide hip hop group the Funkoars.

The atmosphere at that show was different to most other Australian hip hop shows I’ve been to. It felt like a celebration of black excellence.

‘Briggs Live at Juvie’ seems like an extension of these other developments. He is evidently aware of the courage and strength of those Aboriginal leaders that have come before him and is carrying on that legacy in his own unique and charismatic way.

As Victorian Aboriginal Children’s Commissioner Andrew Jackamos, another Yorta Yorta man, recently wrote on this blog: culture is far more than a perk for young Koori kids; it is a lifeline. He wrote that “cultural rights directly impact on a child’s ability to meaningfully enjoy every other human right and freedom, let alone their health.”

There needs to be more opportunities for role models like Briggs and countless other passionate, committed Aboriginal and Torres Strait Islander people all over Australia to work with kids whose reality they understand far better than the outsiders often drafted in to do this kind of work.

It is crucial that this happens in youth detention centres, but it has to happen much earlier too, to turn around what is now a youth detention epidemic among Aboriginal and Torres Strait Islander kids in Australia.

From Reiby in Sydney, Vice take us up to Darwin to ride along with the Larrakia Night Patrol.

This second part to the series is confronting. It deals with the carnage wrought by alcohol among marginalised and maligned Aboriginal people living in the long grass on the fringes of Darwin.

Tauto Sansbury gives some context in the film, explaining that invasion, dispossession and forced child-removal has resulted in widespread intergenerational trauma that needs to be better acknowledged and addressed. 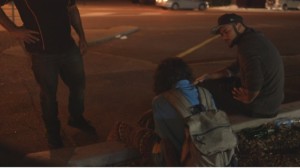 What shines through in this documentary, though, is the commitment, care and compassion that Larrakia staff bring to their work for their people.

Larrakia Nations, among many other things, play a vital role by providing care, support and assistance to the ‘long grassers’ in Darwin (where the Indigenous homeless population are colloquially referred to by this name).

This documentary highlights the need to respond to alcohol and drug abuse through better investment in therapeutic community-led approaches, rather than the failed law and order response that is currently dominant in the Northern Territory.

I couldn’t help but think of the tragic story of Kumanjayi Langdon when I watched this documentary. Mr Langdon was a Warlpiri Elder who recently died in a police cell in Darwin where he had been locked up for public drinking under the NT’s new paperless arrest laws. 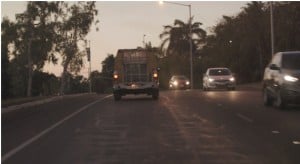 This film describes the cycle that starts with a fine. Yet under the new laws a person can be arrested and detained in a police cell immediately for what used to result in only such a fine.

Kumanjayi Landgon had been drinking, but was described by police at the inquest into his death as being at all times polite and cooperative with police; there was no justifiable reason for his arrest and detention.

The Coroner put it as follows:

Kumanjayi Langdon, a sick middle-aged Aboriginal man, was treated like a criminal and incarcerated like a criminal; he died in a police cell which was built to house criminals. He died in his sleep with strangers in this cold and concrete cell. He died of natural causes and was always likely to die suddenly due to chronic and serious heart disease, but he was entitled to die in peace, in the comfort of family and friends. In my view, he was entitled to die as a free man.

The Coroner found that these paperless arrest laws were putting such a massive burden on police and nurses at the watchouse that they couldn’t properly care for the flood of Aboriginal people now being targeted and locked up for offences that would never carry a prison sentence.

The coroner urged the government to scrap these laws before they led to more deaths – a call that has so far been ignored. The North Australian Aboriginal Justice Agency have led the charge to see these laws repealed and are currently awaiting the decision of the High Court.

Former Police Union President Vince Kelly said that “we can’t arrest ourselves out of this mess.” He is right. Yet Larrakia Night Patrol suffered funding cuts under this NT Government, at the same time as they increased police powers to arrest people for extremely minor offences.

The same NT Government has transferred kids to a former adult detention centre and treated them horrifically. These retrograde steps fail everyone, including those people who demand tough responses to crime.

These kids in detention far too often become more hardened and marginalised; the community at large becomes less safe and more Aboriginal people face death in custody, while the underlying problems go unresolved.

The third and final documentary, Barred Calls, follows the incredibly patient and caring Elva from the Victorian Aboriginal Legal Service as she is notified of, and phones to check after the welfare of every Aboriginal person taken into police custody in Victoria and Tasmania.

This life-saving service provides a stark contrast to the “lock em up” approach that is putting Aboriginal lives at risk in the Northern Territory. 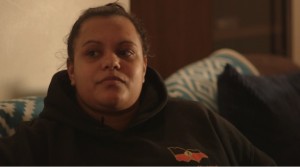 Elva’s tireless work is one example of how the Victorian Aboriginal Legal Services, and Aboriginal and Torres Strait Islander Legal Services generally, go far beyond the usual transactional legal relationship.

Being controlled by and run for Aboriginal people, they look at the bigger picture and do vital work in the face of constant funding shortages.

Despite having been a recommendation of the Royal Commission into Aboriginal Deaths in Custody, custody notification services like this are only in place in New South Wales, Victoria and Tasmania.

Many Aboriginal deaths in custody, like those of Kwementyaye Briscoe, Ms Dhu and Kumanjayi Langdon might have been avoided if such a system were in place in the Northern Territory and Western Australia. A program like this should be in place in all states and territories. 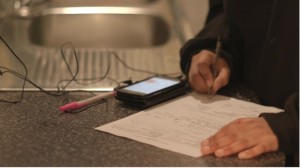 The Vice Over Represented series provides some brilliant insights into some of the issues and solutions in the justice system.

They are well worth checking out. So too is Vice’s recent edition devoted to the issue of incarceration that touches on a range of related issues.

• Julian Cleary is a researcher/campaigner with Amnesty International’s Indigenous Rights team. In this role, he has done extensive research into Aboriginal and Torres Strait Islander youth justice issues across Australia. Julian also worked for several years in advocacy and research roles with the Central Land Council in Alice Springs. In his downtime, Julian makes hip hop music under the pseudonym Jules Berne and as part of Renovators Dream. In April 2015 he released debut solo EP Escapades.