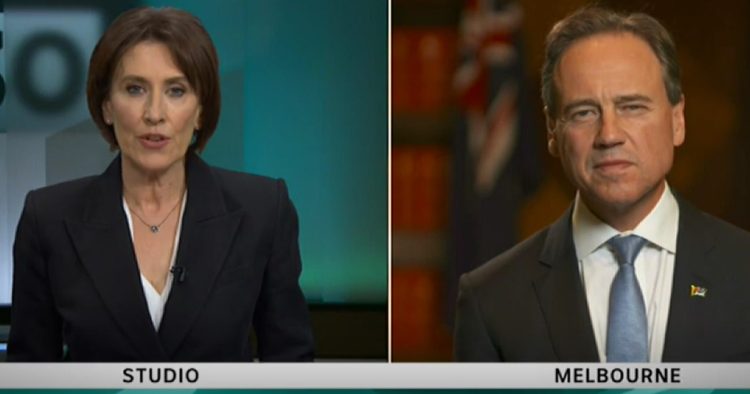 A question by Virginia Trioli prompted the Health Minister's attack

Introduction by Croakey: In the article below, prominent health policy analyst and economist Professor Stephen Duckett addresses the substance of an attack on his professional credibility, made on national television last night by Federal Health Minister Greg Hunt.

Duckett, Health Program Director at the Grattan Institute, does not speculate on why the Minister appeared to lose his cool in making such an unusually personal attack (watch a clip here).

Perhaps it was “attack as the best form of defence”, if Hunt comes under increasing pressure over Australia’s resistance to embracing an elimination strategy as Aotearoa/New Zealand has followed.

Croakey readers may remember that earlier in the pandemic, the Government rang the ABC to complain, after feeling the pressure from medical journalist Dr Norman Swan’s independent reporting and analysis.

It appears that Croakey was not alone in being taken aback by the Minister’s attack. One senior health policy source told us:

It was an unnecessary and undignified response to a well-argued policy position.

There has to be room for civilised and respectful debate of issues that fundamentally affect all of us.

Trust is critical to public acceptance of the difficult measures that have had to be put in place during the pandemic, and it is swiftly eroded when politicians are scornful of public views and particularly those of respected leaders and experts.”

“Irresponsible and dangerous” or a call to action?

The Minister replied: “No. The particular person you quoted said in March that we would run out of ventilators in three weeks and that was a wildly incorrect and irresponsible and dangerous statement…”

What we said was neither irresponsible nor dangerous and was correct at the time.

As with any statement, context is important. We were concerned that if tends continued as they were, then ICU capacity would have been overwhelmed. Following our commentary, government introduced social (spatial) distancing restrictions, changing the underlying trends, and ICUs were not overwhelmed. We chalked that up as contributing to a good outcome.

We published two Grattan Blog posts in March on this issue. In both, we used conditional statements: if no action was taken, then XX would be the outcome.

Our gloomy ICU forecast is primarily determined by the exponential growth in diagnosed cases. This is what needs to change. The goal should be to bring new cases in Australia down to zero as quickly as possible. All state governments must act decisively and bring in a broad shutdown now.”

Governments subsequently introduced restrictions, but we were still unsure of their effect and so in our blog post of 27 March we concluded:

Whether the measures Australia has put in place will slow the spread here will not be known for about 10 days. By then, if our COVID-19 case numbers continue to rise exponentially, our ICU beds will have started to fill up.”

We were not the only ones to be concerned about ICU capacity.

For example, Melbourne University professorial fellow John Mathews, a former Australian deputy chief medical officer and head of the National Centre for Disease Control, said in an interview with The Australian published on 2 April that Australia could run out of intensive care beds that month unless it sufficiently flattened the “exponential” COVID-19 curve.

In a 20 March article in The Conversation, three health experts wrote that, based on data, statistician Megan Higgie from James Cook University had suggested that Australia ‘could run out of ICU beds in early April’.

A similar view, supported by a modelling study, was published in the Medical Journal of Australia.

And the Federal Government’s own ‘Impact of COVID-19’ report, published in April, had this to say:

The theoretical modelling finds an uncontrolled COVID-19 pandemic scenario would overwhelm our health system for many weeks.”

Governments across Australia acted to increase dramatically the number of ventilators, and the good news is we did not run out of ICU capacity.

PrevPreviousBuild back better: climate and community are critical to equity in pandemic recovery
NextRecord COVID-19 cases in Victoria amid scrutiny of hotel quarantine, public housing lockdownNext