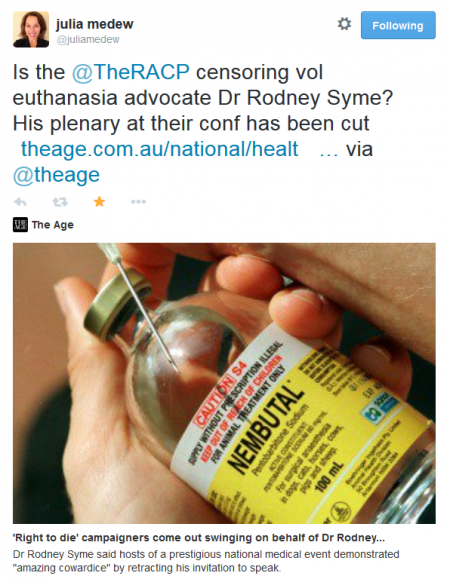 Dying with Dignity campaigner Dr Rodney Syme has accused the Royal Australasian College of Physicians (RACP) of “cowardly” and “insulting” behaviour and of trying to stifle debate, after withdrawing his invitation to speak at its upcoming annual conference.

“The outcome is an act of academic censorship of the worst kind – they did not know the content of my address,” Syme said in a statement to colleagues that has been widely shared, at his behest.

Croakey has sought a response from the RACP, whose Congress 2015 is being staged in Cairns from 24–27 May on the theme of with the theme ‘Breaking Boundaries Creating Connections’.

The Age reported on Tuesday that the RACP’s decision came before the publication of an article in Fairfax media on 11 May which reported that Syme had publicly handed lethal illegal medication to a terminal cancer  victim. It quotes former Northern Territory Chief Minister Marshall Perron as saying the RACP decision was “disgraceful”. It said Perron, the architect of Australia’s first euthanasia laws, wrote to the RACP saying it should encourage open honest discussion. “Instead you demonstrate a cowardly approach of which you should be ashamed,” he wrote.

Professor Peter Brooks, from the Centre for Health Policy in the School of Population and Global Health at Melbourne University, told Croakey he was “appalled” by the RACP’s decision, which he said amounted to “outrageous behaviour”.

In his emailed statement, Syme says he was invited in February by a member of the Congress  organising committee to deliver a plenary address on ‘Caring for those at the end of their journey’ .

“ I was very honoured to receive such an invitation, particularly since I was not a physician, and was in the twilight of my professional career (although I have a considerable experience in the subject),” he said.

“I did not think a polemic on voluntary assisted dying (voluntary euthanasia) would be suitable, and offered to discuss the gap between the rhetoric and the reality of palliative care, basing it on published material,” he said.

Syme said he spent considerable time developing and honing his address over the next 10 weeks, but was then phoned on 8 May by two representatives of the College, who told him there was “considerable unrest” among palliative care specialists about his address.

He was told that “due to large amount of dissent by Fellows, a decision had been made to withdraw my invitation to attend the meeting, and to speak.” That was followed up three days later with an email from RACP Vice-President Dr Catherine Yelland, confirming the decision to withdraw.

Syme said his response was, “as follows:

Croakey will update this article with any response from the RACP.

Below are some related tweets: