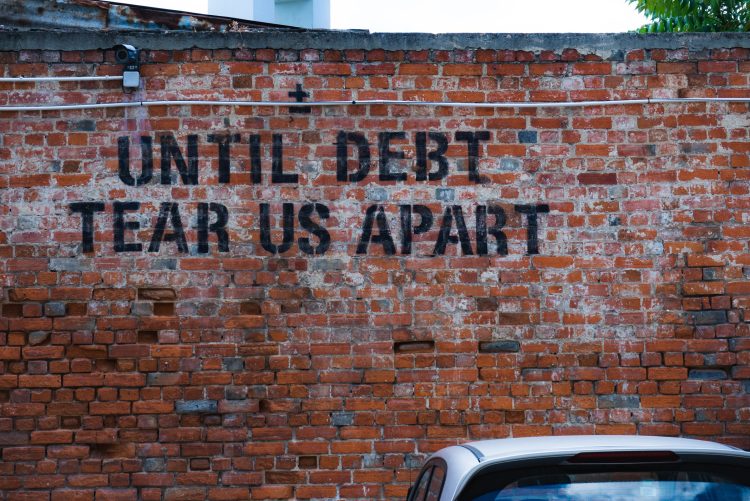 The burden of #RoboDebt. Photo by Ehud Neuhaus on Unsplash

Introduction by Croakey: The Federal Government’s Robodebt settlement will not benefit many people who have been affected by the harmful policy, according to a statement issued today by independent MP Andrew Wilkie.

Wilkie said the Commonwealth Ombudsman had agreed to his request to again investigate Robodebt (which sought to recover “overpayments” made to social security recipients) because the settlement would not include people who appealed their debt, many of whom had an unsatisfactory or unfair outcome from this process.

Indeed I am still having constituents contact my office each week in tears over their Robodebt. For example, one constituent had several Robodebts raised against her totaling nearly $7,000 dating back a decade. The debt was clearly unwarranted, but because she unsuccessfully appealed it there is no possibility of accessing any of the $1.2 billion.

In another case, the constituent had several debts raised against her for $10,917 dating back to 2010. She can see no justification for this debt but again has no recourse because she has already unsuccessfully appealed. In both cases the appeal process was as flawed as the original Robodebt.”

Meanwhile, Professor Peter Whiteford from the Australian National University provides a useful overview of the history of concerns about this “this major policy fiasco”, noting the roles of journalistic investigation, political scrutiny and the legal aid system in providing a remedy for its victims.

The Robodebt class action bought by Gordon Legal has been settled at a cost to the government of around $1.2 billion. According to federal Labor frontbencher Bill Shorten, this is the biggest class action in Australian legal history.

As is well-known, “Robodebt” is the label commonly applied to the initiative starting in 2016 designed to increase recoveries by government of “overpayments” made to social security recipients, retrospectively dating back to 2010.

This table sets out a chronology of the major developments in Robodebt from 2016 up to this week. 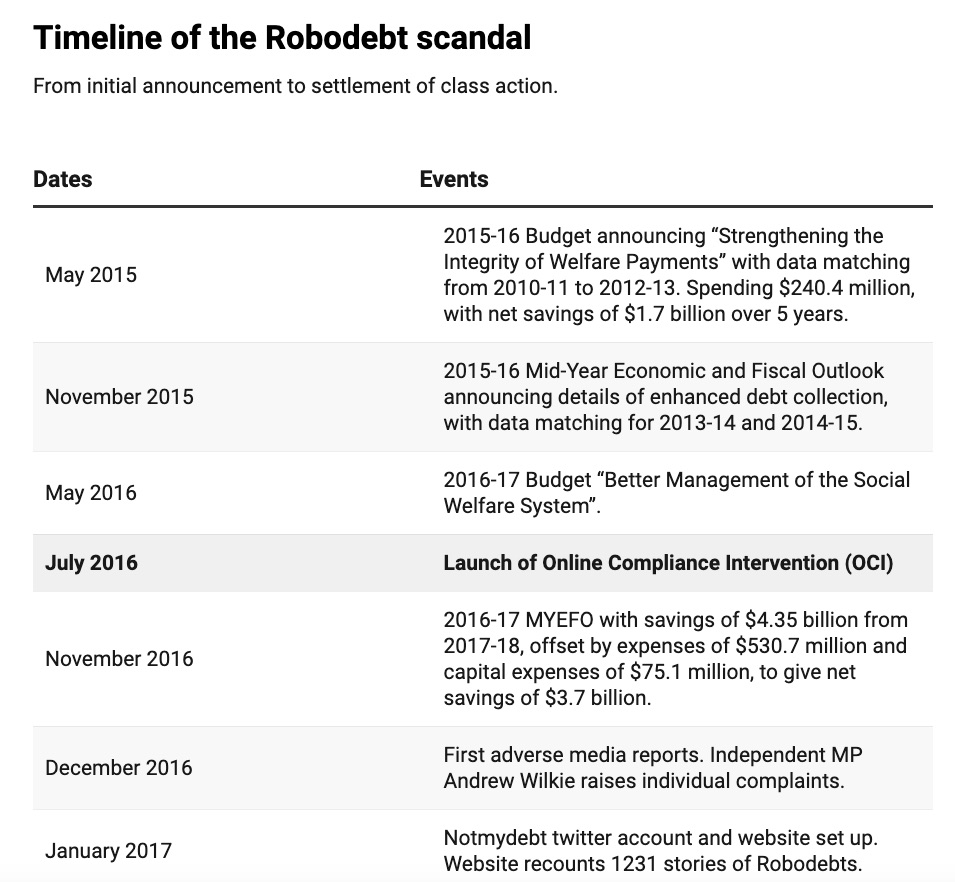 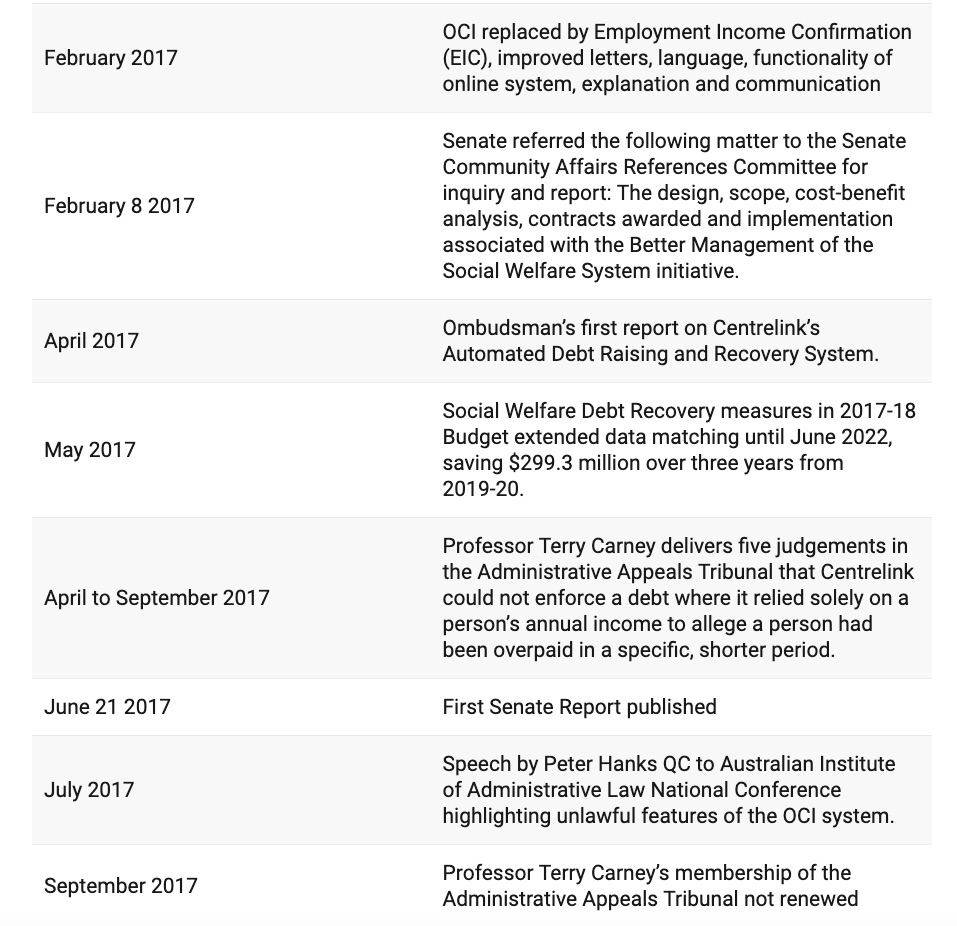 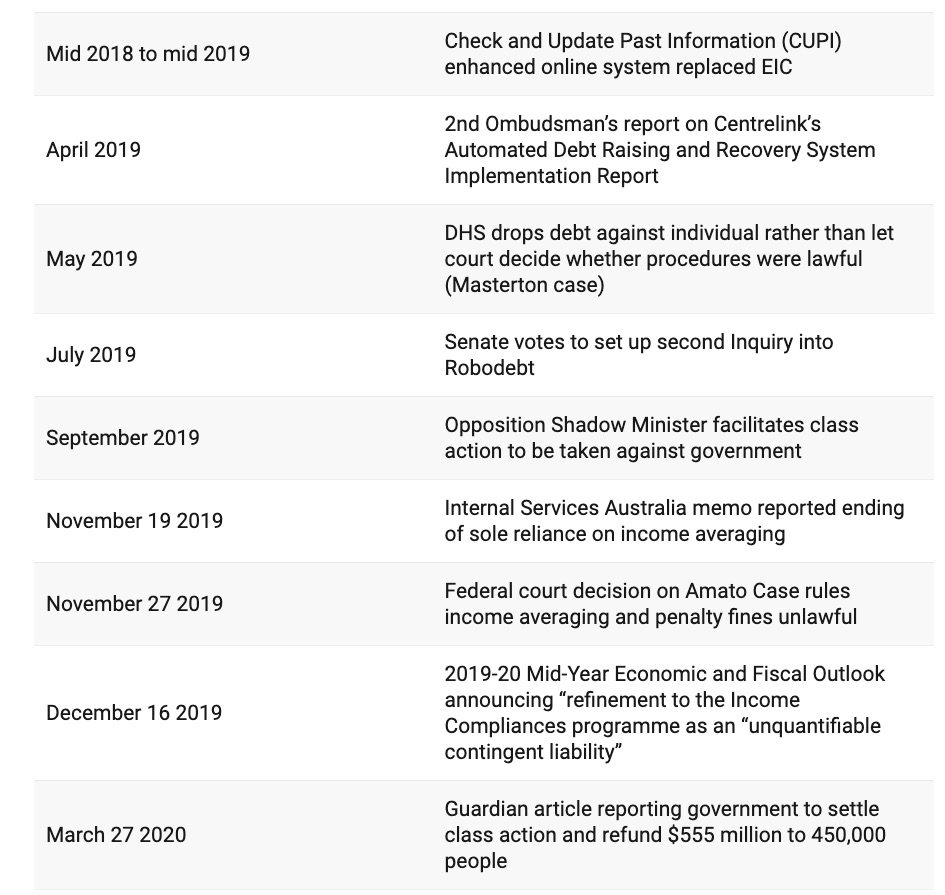 The “Robodebt” story started with an announcement as part of the 2015-16 budget that the government would save $1.7 billion over five years by enhancing the Department of Human Services (DHS) fraud prevention and debt recovery capability.

Data-matching with the Australian Tax Office had been started in 1991 by the then-Labor government, with the automation of the system being increased in 2011.

Read more: The ‘problem’ is not ‘fixed’. Why we need a royal commission into robodebt

In addition, where previously the DHS collected verifying information from employers, the new system shifted responsibility for providing information to the individuals concerned, reversing the “onus of proof”.

As the 2017 Senate committee report points out,

the responsibility for checking and clarifying income information has shifted from the department to current and former recipients of Centrelink payments. … the significant reduction in workload for the department by this outsourcing, has allowed for a huge increase in the number of income discrepancy investigations that the department initiates

In late 2016, members of the public raised concerns about letters from the DHS advising they owed the government significant debts for past income support payments they had received.

The controversy escalated, with the shadow human services minister requesting the auditor general to investigate, and an independent MP separately asking the Commonwealth ombudsman to look into the matter after receiving more than 100 complaints about the debts.

Read more: Government to repay 470,000 unlawful robodebts in what might be Australia’s biggest-ever financial backdown

A number of other individuals, journalists and legal academics consistently highlighted the issue on social and mainstream media.

There have since been tworeports by the Commonwealth ombudsman and two parliamentary committee inquiries (one ongoing).

The unravelling of the scheme

Victoria Legal Aid experienced a large spike in calls for legal help with Robodebt issues going back to 2016. In 2018, Centrelink raised a debt of over $3,700 against a former student, Madeleine Masterton, and in February 2019, VLA filed an application for judicial review. Within a week, the debt was reduced to around $600.

At the first case management hearing, Centrelink accepted Masterton’s original declared income, with the result that there was no debt, and no legal ruling on the issue.

The second case also involved a former student, Deanna Amato, who only became aware that a debt of just over $3,200 had been raised against her — plus a penalty of 10% for “not engaging” — when her income tax refund of around $1,700 was taken as repayment.

After the litigation began, Centrelink gathered information from her employers to determine the debt should be reduced to $1.48. A subsequent Freedom of Information request revealed she had actually been underpaid by $480.

In September 2019, the DHS completely dropped the Amato debt but refused to pay interest. Then in November, the Federal Court ruled that income averaging was unlawful – a conclusion the government conceded a week before the case came to trial.

It was this ruling that required the government to have more than 500,000 individual debts manually recalculated – at an unknown cost.

There is an extensive literature on “policy failure”. Well-known examples range from cost overruns in constructing the Sydney Opera House and the Bay Area Rapid Transit network in San Francisco, to the poll tax in Britain in the 1980s.

What separates a “fiasco” from other forms of policy failure is that it is commonly regarded as being reasonably foreseeable – that is, the failure should or could have been avoided with foresight.

The current situation was clearly foreseeable. The income reported to the ATO is what people receive in the financial year from July 1 to June 30. Social Security payments are made fortnightly and the level of entitlement is based on the financial and personal circumstances that apply during that reporting period.

In January 2017, I pointed out on this website that “this approach [averaging] will only work correctly if individuals receive exactly the same income each fortnight. For students, this is very unlikely.”

More significantly, in July 2017, Peter Hanks gave the National Lecture at the Australian Institute of Administrative Law National Conference in which he criticised the Commonwealth for its new method of raising and recovering what “Centrelink chose to describe as ‘debts’”.

Professor Terry Carney – who served for nearly 40 years as a member of the Social Services and Child Support Division of the Administrative Appeals Tribunal and its predecessor the Social Security Appeals Tribunal – also made five judgements in 2017 that there was no debt where Centrelink calculated overpayments by applying averaged annual income to shorter periods.

In an article in 2018, Carney noted the Commonwealth had to prove that debts existed rather than requiring individuals to prove they did not. This was also pointed out by Hanks in 2017, and was the conclusion reached by the Federal Court in the Amato case.

The department could have appealed these judgements to the next level of the AAT where rulings would have been published, but chose not to – suggesting it was not confident of its position.

The Guardian also revealed there were 76 other AAT cases where robodebts were set aside because the calculations used by Centrelink “could not lawfully support the existence of a debt”. In each case, the Commonwealth elected not to appeal.

Read more: From robodebt to racism: what can go wrong when governments let algorithms make the decisions

What is most striking about Robodebt is how it differs from earlier examples that focus on problems of implementation, or where outcomes do not match intended objectives.

Essentially, the Robodebt fiasco arises from the very formulation of the policy. From the beginning, a central feature of the program was unlawful.

The unlawfulness does not relate to a legal technicality or a mistake in drafting. In brief, the “overpayments” the government recovered using income averaging were not overpayments. No one who understood the social security system and its governing legislation could have realistically thought they were.

What does the future hold?

The Robodebt fiasco involves policy failures across numerous dimensions. The most obvious – and in many ways the least important failure – is it failed to achieve the budgetary savings that were its main objective.

More seriously, hundreds of thousands of people were adversely affected. This human cost is difficult to assess and involves much more than financial losses.

Just over 2,000 people who had received a Robodebt notice between July 2016 and October 2018 died during that period, although in the absence of an official coroner’s report, no causes can be attributed.

However, it has been noted that from January 2017, Centrelink began tweeting the contact number for Lifeline, the national charity providing 24-hour support and suicide prevention services.

This story is not yet finalised. The Federal Court has yet to approve the terms of the settlement. The second inquiry by the Senate Community Affairs is due to present its report in February 2021.

The opposition has indicated it would set up a royal commission into Robodebt if elected to office.

Nevertheless, there are some reasons to be cheerful. While the checks on power that are built into the appeals processes in the Australian social security system were initially brushed aside, the combination of community activism, journalistic investigation, political scrutiny and the legal aid system appear to have ultimately provided a remedy to the victims of this major policy fiasco.

In future, there is clearly a need to strengthen these formal accountability and review structures.

PrevPreviousThe Health Wrap: United States election fallout continues amidst out-of-control pandemic, rebuilding trust in science, why Mozart is music to surgeons’ ears, and much more
NextHonouring all voices in the quest to close the gap in drug and alcohol-related harmNext