‘Rock solid’ commitment to Medicare as #healthbudget17 rolls out

The Turnbull government declared its “rock solid” commitment to universal health care with a $10 billion pledge to health in the 2017-18 Federal Budget including the staggered withdrawal of the Medicare indexation freeze and establishment of a Medicare Guarantee Fund to ensure longevity of universal health care and access to medicines.

The Fund, to be underpinned by the Medicare Levy on taxpayers with a top up from personal income tax receipts, would ensure that Medicare and Pharmaceutical Benefits scheme remained sustainable into the future.

Seeking to draw a line under the damaging Mediscare election campaign and tensions with doctors over the indexation freeze, Treasurer Scott Morrison announced that the government would resume indexation for GP bulk billing from July 1, 2017, for standard GP and specialist consultations from July 1, 2018 and for specialist procedural and allied health from July 1 2019.

He also announced the reinstatement of the bulk-billing incentive for diagnostic imaging and pathology, including x-rays, scans, blood tests and pap smears.

Combined, these about-faces would cost $2.2 billion over the next four years, he said.

“Tonight we put to rest any doubts about Medicare and the Pharmaceutical Benefits Scheme,” Morrison said in his budget address to parliament.

This Budget makes the right choices to secure the better days ahead.
You can read my Budget speech here: https://t.co/yuBER8R217 pic.twitter.com/H7wiD9JiBO

Health Minister Greg Hunt said all Australians could be assured that “Medicare is not only here to stay, but will be strengthened into the future”:

Australians can be assured that the Turnbull Government’s commitment to Medicare and universal health care is rock solid. We want Australians to continue to have access to the best health care system in the world – and a strong, sustainable, best clinical practice Medicare is essential to this.

As leaked ahead of Tuesday’s budget, the government also committed to full funding of the National Disability Insurance Scheme via a 0.5 percentage point increase to the Medicare Levy to be ringfenced for this purpose.

Morrison committed $80mln to people with a mental illness resulting in a psychosocial disability who had been at risk of falling through the cracks of the NDIS transition, though this funding is contingent on matched commitments from the states and territories.

Perhaps unsurprisingly, prevention and social determinants were given short shrift and the “glacial” pace of the MBS thaw would see out-of-pocket costs continue to balloon, undermining the universality of Medicare, warned Lesley Russell from the Menzies Centre for Health Policy at the University of Sydney:

A vision for the future and real reforms are shockingly absent in the budget: the Health Care Homes project has been delayed, although it will now include community pharmacy; the MBS Review has continued funding, but only for three years; the investment in prevention (beyond sport and immunisation) is miniscule and doesn’t come close to reflecting the intergenerational burdens of cost and lost productivity; there is nothing to progress needed integration of mental health and substance abuse services into primary care and of hospital and community care.

Some of the headline numbers include: 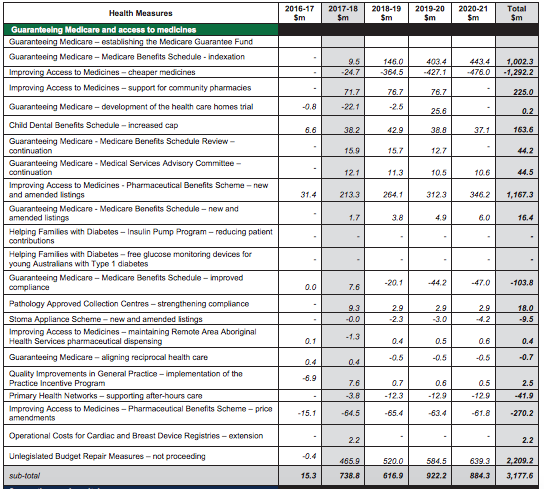 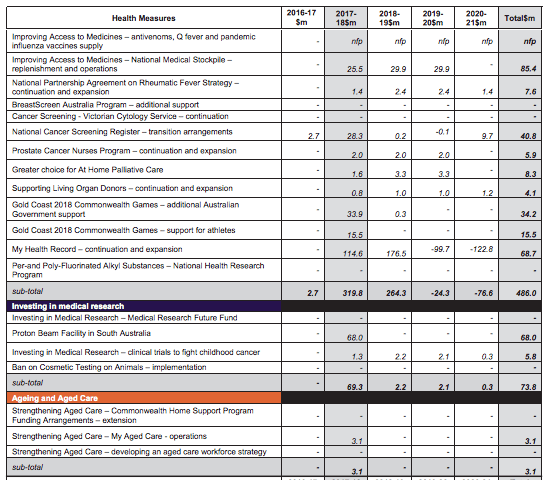 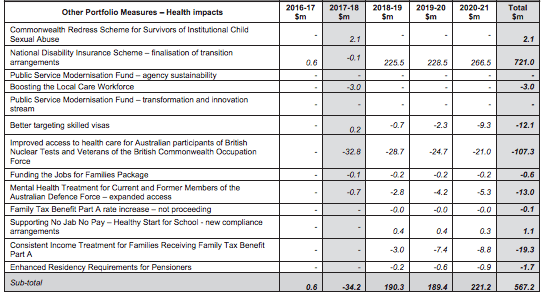 There was little on offer for Aboriginal and Torres Strait Islander Australians in the Federal Budget, with Indigenous Affairs Minister Nigel Scullion emphasising greater employment and investment in Indigenous businesses as the government’s priority.

Scullion heaped praise on the controversial Indigenous Advancement Strategy and Community Development Program, and said more needed to be done to “break the cycle of welfare dependency and ensure jobseekers are actively engaged and contributing to their communities.”

Among funding announced in the Budget to support this aim:

Scullion said the government would expedite legislation to create a specialist Productivity Commissioner for Aboriginal and Torres Strait Islander affairs to lead a whole-of-government evaluation of how policies and programmes impacted on Indigenous Australians. This would be funded through “reprioritisation” of some $3 million from the IAS, he said.

Scullion also announced the establishment of a $50 million Indigenous Research Fund “to refresh the Closing the Gap agenda”.

“These measures will be designed and implemented in close consultation with Aboriginal and Torres Strait Islander Australians,” said Scullion.

“This reflects the Australian Government’s absolute commitment to a new way of working with Aboriginal and Torres Strait Islander people in genuine partnership.”

As leaked prior to the budget, Indigenous Australians present or near the site of remote British nuclear tests in the 1950s and 60s will be eligible for a veteran’s Gold Card covering most of their health costs.

Apart from this, there was little mention of Indigenous health, with the only new funding a $7.6 million National Partnership Agreement on rheumatic fever.

Morrison described it as a budget based on the principles of fairness, security and opportunity, and it was a mixed bag of sometimes contradictory imperatives. 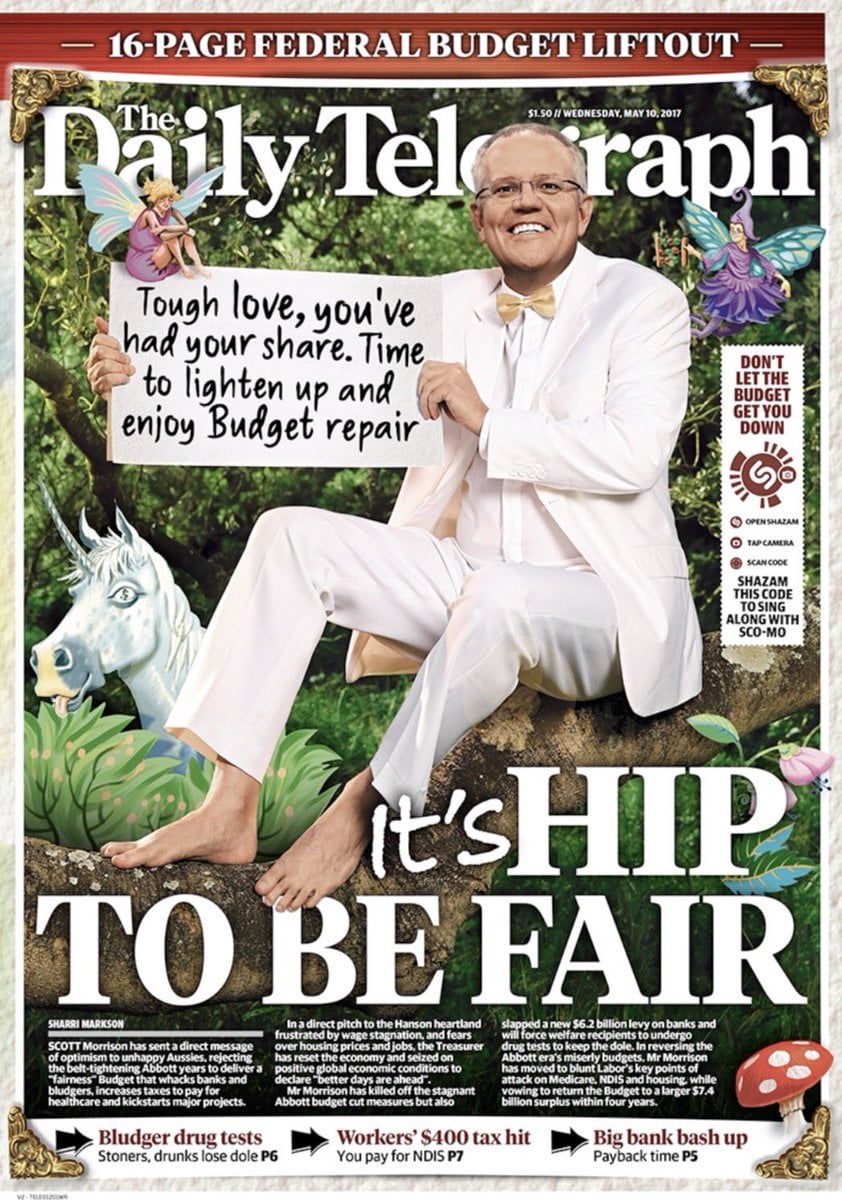 Heartening those championing a #peoplesbudget, he slugged Australia’s five largest banks with a new six basis point levy expected to deliver around $1.5 billion in revenue every year to shore up government coffers.

The banks will also face much heftier fines for misconduct, a permanent banking investigation team will be established within the ACCC and an ‘open banking’ regime from 2018 will bring pressure to deliver cheaper, more effective services.

Morrison committed to a crackdown on negative gearing and multinational corporation tax avoidance.

He announced $375 million to permanently extend homelessness funding to the states “with a continued focus on supporting young people and victims of domestic violence,” and said the government would restore the pensioner  concession card to those affected by the recent assets test change.

However, he detailed further cuts to foreign aid and punitive new measures for those on welfare, with failure to show up for appointments with Centrelink or to find suitable employment to result in reduced or cancelled payments, as well as a crackdown on jobseekers affected by drug and alcohol problems.

To this end, he announced a “modest” drug testing trial of 5,000 new social security recipients, where a positive result would lead to mandatory transition to the Cashless Debit Card for their payments, further testing and possible referral for treatment. In addition, he proposed denying benefits to those with a disability “caused solely by their own substance abuse”.

Morrison said the verification requirements would be strengthened for single parents applying for benefits as well as for new migrants accessing Australian pensions.

In education (as leaked pre-budget), schools fared well, with the Turnbull govenment committing to funding increases above inflation for the needs-based Gonski model, pledging $18.6 billion over the next 10 years.

Universities were targeted for savings and revenue, with student contributions to increase and a 2.5% “efficiency dividend” applied to institutions over the next two years to the tune of about $400 million.

The environment barely rated a mention in a Budget focused on infrastructure and residential construction, and there was scant funding to be seen.

Environment and Energy Minister Josh Frydenberg highlighted expansion of the Snowy Hydro Scheme, feasibility studies into gas pipelines from the NT and WA, and $110 million for a solar thermal plant in Port Augusta, as well as increased funding for the ACCC and Australian Energy Regulator to police energy sector conduct.

On the environment, he touted a $1 billion investment over 5 years in the National Landcare Program to benefit farmers of food and fibre.

“We will continue to support on-ground community projects that harness local know-how and deliver practical and tangible results,” said Frydenberg.

“This funding will put the NLP in an even stronger position to continue to deliver for our nation’s environment, including the Great Barrier Reef.”

“Resources for Indigenous Protected Areas will also be boosted to help provide employment, education and training opportunities for Indigenous people in remote areas while protecting our cultural heritage into the future.”

Like many, we’re disappointed to see so little funding for the environment and no mention of climate change in the Budget Speech #budget2017
— Friends of the Earth (@FoEAustralia) May 9, 2017

We’ve wrapped the reaction so far tonight, and there’s bound to be more in the coming days and weeks. As always, we would love to hear your thoughts, and be sure to keep the conversation going at #healthbudget17.