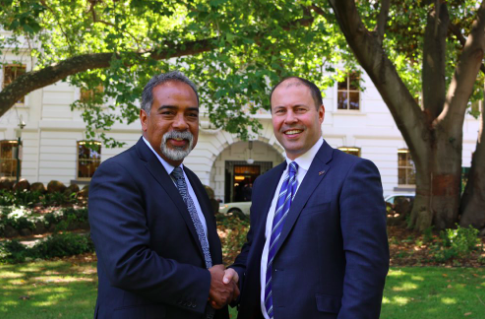 The Federal Government has announced the appointment of current Lowitja Institute CEO Romlie Mokak as the first full-time Indigenous Policy Evaluation Commissioner of the Productivity Commission, commencing in April 2019 for a five year period.

Once he takes up the role, the Government will task the Productivity Commission with “developing and implementing an evaluation strategy for policies and programs affecting Aboriginal and Torres Strait Islander Australians, to be reported against by all Australian Government agencies”, Treasurer Josh Frydenberg said in a statement.

Frydenberg said the creation of the position “reflects the Government’s commitment to Closing the Gap”. He said:

The position will strengthen research and evaluation of Indigenous policies to help ensure funding on the ground delivers better outcomes for Indigenous people.

As the first Indigenous Policy Evaluation Commissioner, Mr Mokak will be crucial in leading the Commission’s enhanced role in Indigenous policy and program evaluation and contribute more broadly to the Commission’s independent advisory responsibilities across a range of economic, social and environmental issues affecting the welfare of Australians.

The role was announced more than 18 months ago by then Prime Minister Malcolm Turnbull following a poor report card on efforts to close the gap in Aboriginal and Torres Strait Islander health outcomes.

The announcement of Mokak’s appointment comes ahead of Wednesday’s Council of Australian Governments (COAG) meeting in Adelaide, which has the Closing the Gap Refresh on the agenda.

Key Aboriginal and Torres Strait Islander groups have complained they have been left out of the process and called for a genuine partnership with government.

Mokak is a Djugun man and a member of the Yawuru people, who is well-respected in Indigenous communities and has deep experience across a range of policy areas affecting Indigenous Australians including disability, ageing, health, financing and substance use, Frydenberg’s statement said.

He also has significant research and evaluation experience, particularly in his recent work as CEO of the Lowitja Institute and as a member of Canada-Australia Indigenous Health and Wellness Collaboration Working Group.

“The Government congratulates Mr Mokak on his appointment and looks forward to him making a significant contribution to the important work of the Commission,” the Treasurer said.