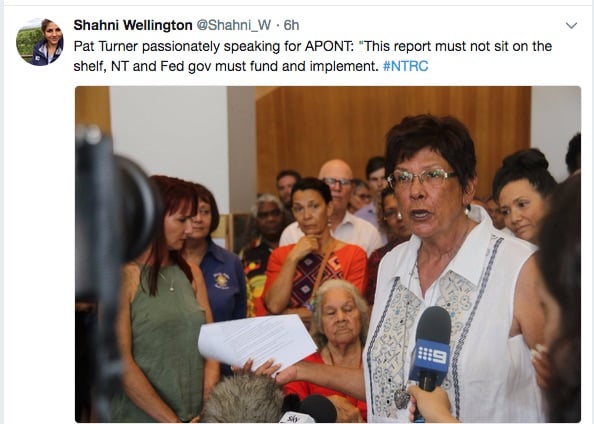 Royal Commission calls for an end to punitive, damaging systems of child protection and detention

The findings of the Royal Commission into the Protection and Detention of Children in the Northern Territory are essential reading for those who make policy and provide services in health, justice and social systems, as well as educators and researchers.

In detailing “systemic and shocking failures” that have traumatised and harmed young people over many years, the Commission has called for wide-ranging systemic changes in the NT, but the findings and recommendations (summarised in this media release) are also relevant for other jurisdictions – as many commentators point out below.

The executive summary of the multi-volume report begins:

The Commission’s inquiry into the detention and care and protection systems of the Northern Territory has revealed systemic and shocking failures. Children and young people have been subjected to regular, repeated and distressing mistreatment and the community has also failed to be protected. The systemic failures occurred over many years and were ignored at the highest levels.

The systems have failed to address the challenges faced by children and young people in care and detention. Indeed, in some cases, they have exacerbated the problems the children and young people faced. These failures are all the more startling in light of the multiplicity of previous reports and inquiries that have investigated youth detention and child protection systems.

The procedures and requirements of the law have simply not been followed in many instances. The systems failed to comply with the basic binding human rights standards in the treatment of children and young people. Government policies and procedures were ignored, systems designed for adults were inappropriately applied to youth, or they simply did not exist.

The narrative of the Commission’s work became clear from the stories of those who exposed their lives to the Commission and to the public. The life trajectory of children and young people in care and detention was repeated over and over. The Commission was told about children born to families in crisis, struggling with addictions, mental health issues, domestic violence and the many challenges of poverty.

Instead of receiving the support those families needed to care for their children we heard of removal from the family and often from the community. Once in the child protection system we heard of inappropriate placements, dislocation from community and culture and a lack of support or follow Royal Commission into the Protection and Detention of Children in the Northern Territory through to address the trauma so many children had suffered in their young lives.

As children absconded from places where they did not feel at home or where they felt unsafe and lonely or to be with other children who had become their family, the next step was contact with the criminal justice system and ultimately detention. That is not, of course, the story of all children in care but it was certainly the story of most children in detention.

The Commission received many suggestions for improvement to the child protection and detention systems. Children, their families, people working in the systems both in the Northern Territory and other parts of Australia and the world, and experts, gave the Commission many ideas for improvement and fundamental change.

Enriched by those ideas, the Commission has made numerous recommendations to address the failures of the care and detention systems. Some recommendations are capable of immediate implementation. Others will require sustained, long term commitment to new approaches.”

Below is a summary of responses to the report, which was launched today by Commissioners Margaret White AO and Mick Gooda, and submitted to the NT and Federal Governments (the Commonwealth’s response, promising to respond “carefully, comprehensively and appropriately”, is here).

And here you can watch an NITV interview with Dylan Voller, commenting on the report, which details his story and says it powerfully illustrates “the consequences of failing to intervene therapeutically in the life of a child when the need to do so first arises”.

Roxy Moore, Indigenous Rights Campaigner with Amnesty Australia, is guest tweeting this week for @IndigenousX and attended the report launch. 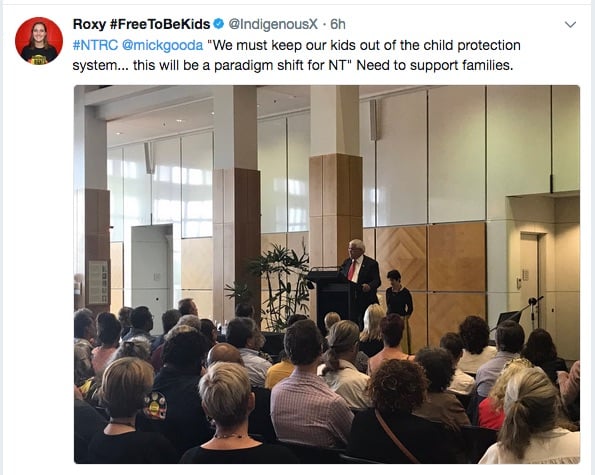 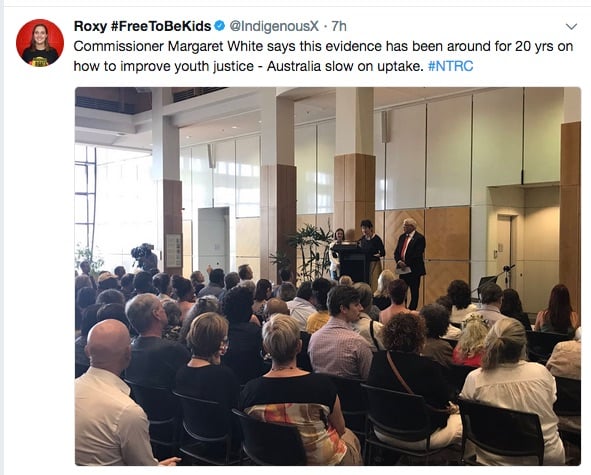 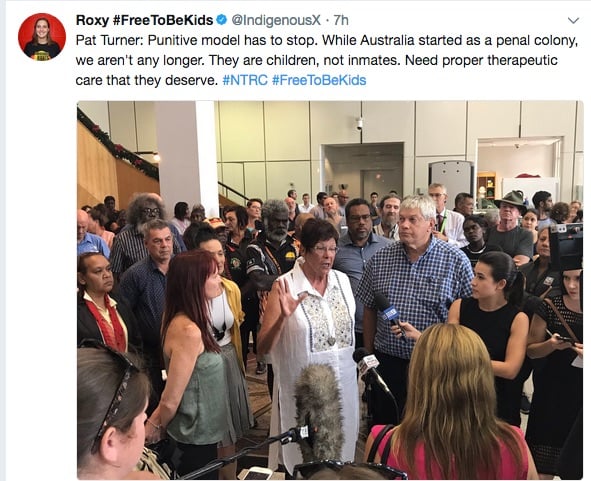 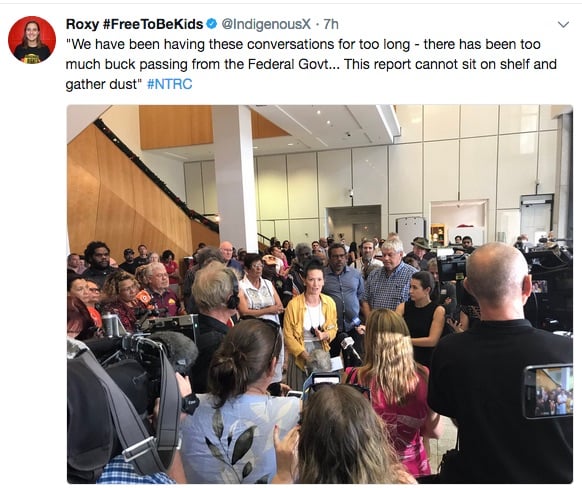 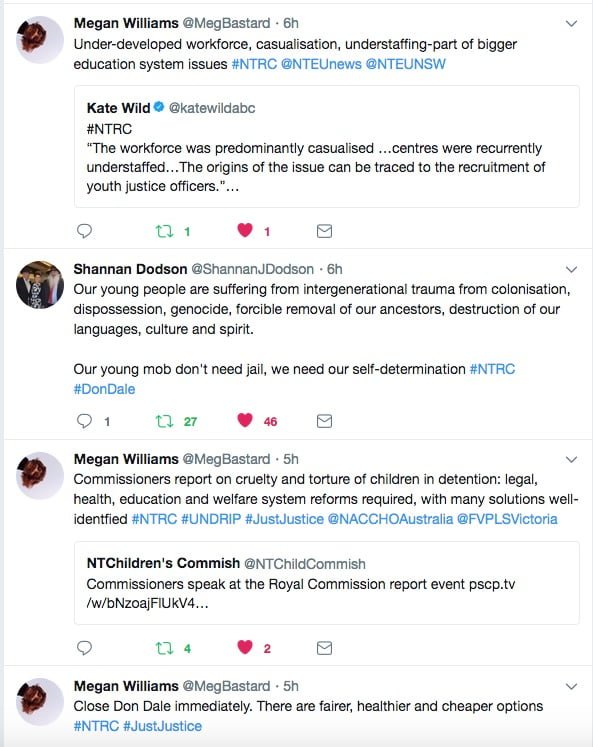 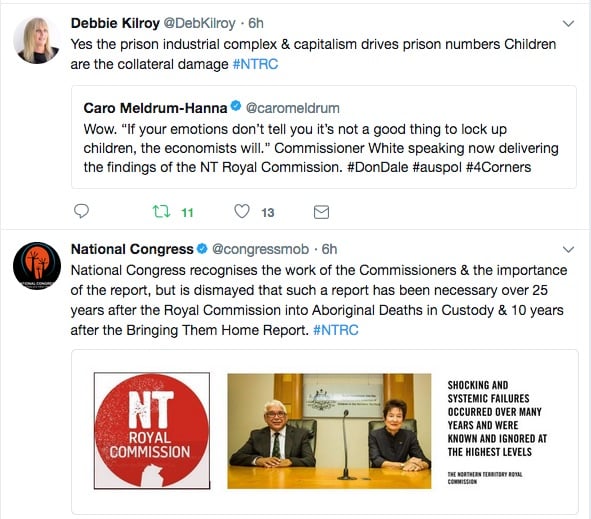 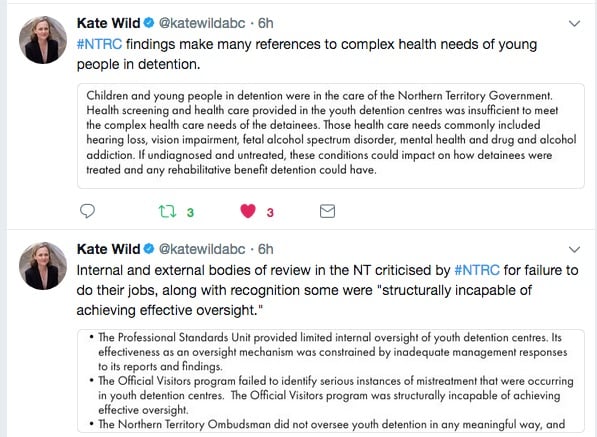 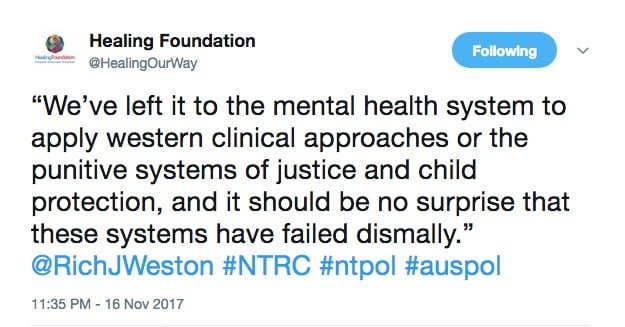 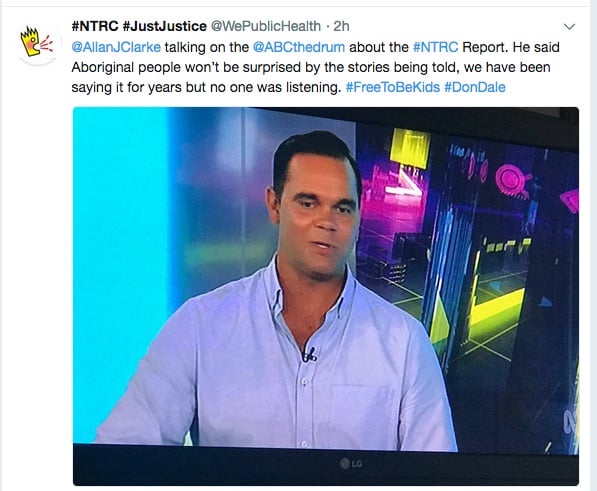 National Aboriginal Community Controlled Organisation (NACCHO) said the NT and Australian Governments must work with Aboriginal Community Controlled Organisations in implementing the Commission’s recommendations. “It is clear from the report that the current system of detention in the Northern Territory is failing our children and young people, leaving many more damaged than when they entered. The system of detention is punitive, harsh, and not in keeping with modern rehabilitative standards. We also know that the child protection system in the Northern Territory is letting down children and their families and is inextricably linked to youth justice issues.” NACCHO acknowledges the young people and their families who shared their stories of trauma and survival and the Aboriginal Community Controlled Organisations, in particular Danilla Dilba, led by Ms Olga Haven, in providing submissions to the inquiry and support to families and young people.

A Healing Foundation statement called for long-term commitment to tackling intergenerational trauma: “Two hundred years of trauma will not resolve easily. Trauma over many generations requires generational solutions. Stopping and starting healing programs over the past decade has contributed to the crisis highlighted in this report. The report has also highlighted the failures and dangers of a workforce dealing with traumatised people without even knowing it, or without the skills to do it safely and effectively. We hope that recommendations to improve training for staff in the juvenile justice, protection and police systems will include a strong emphasis on understanding and safely dealing with trauma.”

The Change the Record coalition said Prime Minister Turnbull must “show leadership and overhaul the youth ‘injustice’ system across the country”.

National Aboriginal and Torres Strait Islander Legal Services (NATSILS) said all governments must learn from this report, to address the “disgraceful state of youth justice and care and protection systems across Australia”.

A Central Australian Aboriginal Congress statement welcomed the report, and called for preventative and therapeutic approaches, rather than “get tough on crime” rhetoric.

National Congress of Australia’s First Peoples called on State and Federal Governments to implement Justice targets within the Closing the Gap refresh agenda: “Early intervention, diversion and rehabilitation must be front and centre of Australia’s justice system to protect the lives of our children.” National Congress called for Prime Minister Turnbull to move quickly to establish a National Action Plan and to fully fund Aboriginal and Torres Strait Islander legal, family and children services.

Reconciliation Australia called for collaborative, community-led approaches to justice reinvestment approaches, with mounting evidence to show this could “help to tackle problems around offending and incarceration, while creating alternative pathways and brighter futures for young people”.

The Victorian Commissioners for Children and Young People, Liana Buchanan and Andrew Jackomos, said: The findings and recommendations “should be a warning for commentators and politicians about where harsh policies on youth offending lead us. This is particularly relevant in Victoria, where for the past 12 months we have heard constant calls and policies for tougher, more punitive approaches to children who offend. The disturbing images of the Don Dale youth justice centre, and the harrowing accounts of the children and young people who were subjected to punishing conditions should remind us that getting tough is not the answer. The youth justice system needs to acknowledge the evidence that links neglect, abuse and trauma with offending behaviour. This should inform a trauma-responsive, age appropriate and humane youth justice system.”

The Law Council of Australia said the key recommendations should be urgently implemented, and that the “report further demonstrated ‘tough on crime’ approaches do not work”.

Amnesty International welcomed the Federal Government’s commitment to show national leadership on the issue of youth justice across Australia, and urges Prime Minister Turnbull to oversee nationwide reform of the youth justice system.

Save the Children Australia calls on the NT and Federal Governments to support key recommendations from the Royal Commission, including a commitment to an implementation timeline and adequate resourcing.

Berry Street, Victoria’s largest independent child and family services organisation, said: “This abuse isn’t isolated to the Northern Territory. Through the Council of Australian Governments (COAG), Berry Street urges all Australian governments to take immediate action to reform our youth justice systems and to build on the recommendations from the Royal Commission. We need to reform youth justice systems, ensuring that the abuse of children’s basic needs and rights ends and re-focus on returning children to their families with the support to enable them to thrive, achieve and never return to the system.”

Ending on a poem and a wish 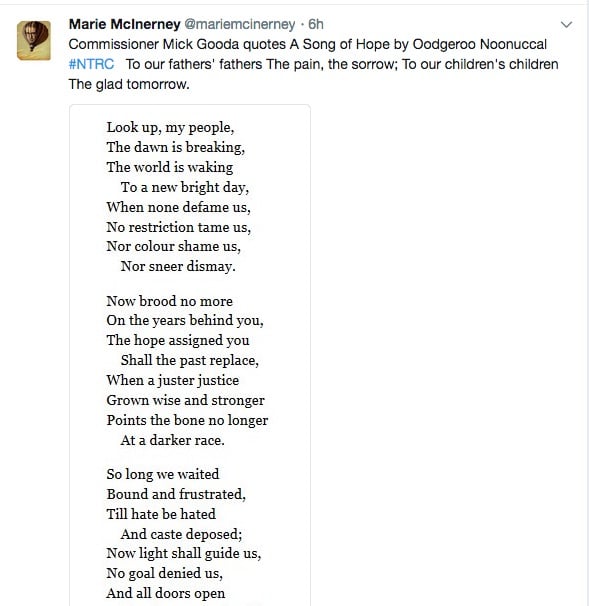