In the articles below, Marge Overs reports on the role of physician assistants in improving Aboriginal healthcare, and Kay Coppa, community and public health director at Miwatj Corporation Aboriginal Health in Nhulunbuy, reports on two presentations that she found particularly noteworthy.

If you’ve ever wondered what a physician assistant (PA) does in a rural practice, Nanette Laufik set the scene in her presentation to the 12th National Rural Health Conference, where she described her work in an Aboriginal community-controlled health service.

She said David had found it difficult to recruit GPs and decided a PA could benefit the centre in several ways: to help with chronic disease management planning and follow-up; to make the clinic more economically efficient (through Medicare billing); and to make more efficient of his time, so he could devote more time to more complex patients and to teaching students and junior doctors.

On a typical day, Nanette says she sees an average of about eight patients under various chronic disease management programs (see table below). 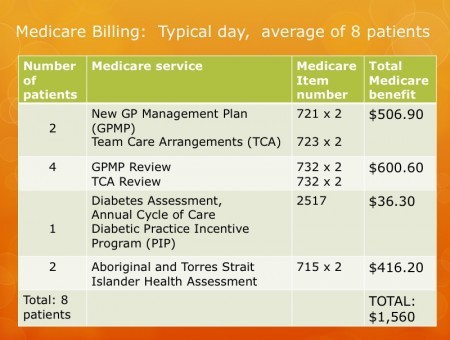 Each patient spends about 40-60 minutes at the clinic: the first 10-20 minutes with the Aboriginal health worker who orders tests and checks for any pressing problems; the next 20-30 minutes with Nanette, who reviews test findings and medications, and talks about lab results and specialist appointments.

For the final part of the consultation, Nanette briefs Dave on her findings and together they formulate a treatment plan.

All the while, the emphasis is on patient-centred planning.

“It’s the patient’s care plan – it’s what is important for the patient in terms of their goals, not my goals,” Nanette says. “My goal might be to get their diabetes under control – they may want to lose weight so they can play with their grandchildren. Patients come up with ideas that are more meaningful to them than me saying they needed to get the HBA1c down.”

And it’s working: she says patients are missing fewer GP and specialist visits, and the practice is also benefiting economically, with Nanette generating almost four times her income in Medicare billings.

“My annual salary for two days a week is $40,00 and I generated $156,000 in Medicare billings,” she says. “Dave is also using his time more efficiently: he’s able to spend more time with teaching students and junior doctors and his quality of life has increased too, as he’s been able to get away on time to coach his young son’s cricket team.”

She says the PA is a true workforce multiplier, “readily fitting into the rural health scheme, working closely with the senior medical officer and improving the efficiency, productivity and financial returns of this chronic disease clinic”.

But as previous Croakey posts have covered (see below), barriers remain to the wider use of the PA role:

Derrick Lopez, from the University of WA, presented a study on disparities in ischaemic heart disease care for rural Aboriginal people.

Although Aboriginal people are three times more likely to have an ischaemic heart disease event compared with other Australians, the study found they have lower rates of coronary artery procedures.

The audience wondered why care was so different for Aboriginal people: whether this was just a problem in certain hospitals or it was a widespread problem. Unfortunately you couldn’t tell because the hospital’s privacy was protected.

It seems a lot of people were very interested in this session. Conveniently, a workshop will be held next month in Adelaide at the Heart Foundation conference on this issue.

• More information on the research is here.

Bernadette Rogerson, from James Cook University, spoke about a fabulous Cairns police initiative to help the high numbers of homeless Aboriginal people get back to their remote communities. This is also problem in Darwin and I wonder where else.

Many of these ‘homeless’ have been brought into the city for medical appointments or may have completed their term in a correction facility but can’t get home.

It’s hard being disconnected from family, friends and country and being exposed to alcohol and other temptations, possibly missing flights and feeling bad about that.

Interviews that James Cook University researchers conducted with Aboriginal people after they got back to their remote communities clearly showed their appreciation, particularly for one specific police officer.

How much better for everyone. Cities don’t have the ‘problem’ of homeless people, and Aboriginal people don’t feel lost and lonely, don’t end up drinking too much and maybe getting into other strife and aren’t wandering around for weeks sometimes trying to find somewhere to stay, look after themselves and get home.

Ah, but the funding runs out soon ….