Rural health leader scoops an “interview” with the PM… #LifestyleChoice

It seems that Prime Minister Tony Abbott has turned to the National Rural Health Alliance for some advice on why he got it so wrong.

Here is *virtually* a transcript of the PM’s interview of the NRHA’s CEO, Gordon Gregory.

Are we remotely interested? The PM talks with the NRHA about remote living and lifestyle choices

PM:                 I’m keen to get your perspective on this remote area living business. If there’s any organisation that understands what I meant, it must surely be the National Rural Health Alliance.

NRHA: Well you’re right to imply that we always try to be ‘reasonable’. We recognise that the more remote the community, the more challenging and costly it is to provide the services people need.

NRHA: What did you say?

PM:                 I was in WA giving support to Colin Barnett, who was widely quoted a few months ago when he said he was going to withdraw essential services from 150 or so remote Indigenous communities in his State.

NRHA: But what exactly did you say?

PM:                 I said that Colin was right to shut down the communities if the cost of providing services in a particular remote location is out of all proportion to the benefits being delivered.

NRHA: [indistinct]  – as we live in a society not an economy. We wrote to Premier Barnett and he replied that the decision by the Commonwealth Government to withdraw its future funding for essential and municipal services to remote Aboriginal communities and a lack of certainty about other federal Indigenous support programs had accelerated the need for his government to make important decisions about the future funding of services in some remote Aboriginal communities. So in effect he blamed you.

NRHA: The Premier also said that the State Government has no desire to move Aboriginal people from their traditional lands and most residents will be able to remain in place if they choose, but in some cases some government funded services might no longer be provided at that location. He indicated that the State Government will undertake an assessment of each remote community and the capacity to meet the needs of its residents in a sustainable way, including through extensive consultation with community residents, local governments and service providers.

NRHA: But you will understand that members of the public are not happy to hear that individual Australians or communities are being made worse off by quarrels between state and federal governments about which is responsible for what. It’s seen as buck-passing.

NRHA: There’s something extremely dodgy in the logic of that statement. To paraphrase: “A government can’t spend public money to ensure that people have the place in Australian society it thinks they should have”. Don’t you think that’s pretty much the opposite of what ought to be the case?

NRHA: But you can’t assume that it’s the people who have chosen to live where there is no school and no jobs. Often it’s the services that have left, leaving the people behind. It’s the school and the jobs that have moved away.

NRHA: But let’s get back to the Alliance’s position. We often illustrate the difficulty of providing services to people in remote areas by saying that one can never expect to have a renal dialysis unit on the corner of a small town with 50 people. But in fact we are wrong in that; it misses the point. If someone in a small country town has end-stage renal disease, public money should be spent to provide that essential service as close to their home as possible. It could be by helping them to travel, or by helping a service reach out to them from a larger centre. Or it could be in their own home – however remote. Thanks to technological developments, home dialysis is becoming safer and more practicable. In reality people in need of specialised care, particularly if it is needed regularly, do often relocate to larger place where that care is more easily accessed. But there is never any suggestion that they must – partly because of the sanctity of what to them is ‘home’.

PM:                 I feel the criticism on that front was unfair. No Prime Minister has made a more personal commitment to Indigenous affairs – –

NRHA: What about Whitlam, Keating?

NRHA: And you remember the joke of course: ‘Before you criticise someone, you should walk a mile in their shoes. That way you are a mile away and you have their shoes.’

NRHA: One of the reasons why people are so disappointed in what you said is that everything that’s true for white people in relation to where they were born, their attachment to place, the sanctity of something called ‘home’ is 40,000 times more true for Aboriginal and Torres Strait Islander people. To be talking of ‘relocating’ people off their traditional country takes us back in time – and is not excusable on the basis of ‘good intentions’ –

NRHA: Indeed. We need to remember that in country areas the workplace and the home are often the same. What this means is that in rural and remote areas structural adjustment relating to industry and jobs is inextricably interwoven with issues relating to people’s home. It’s one thing to provide transitional funding for adjustment in the motor vehicle manufacturing sector for Elizabeth in South Australia. This will be about re-education, retraining, clearing the way for the development of new industries – all of which can be done without uprooting people from their homes. Structural adjustment in the APY Lands of South Australia or the Great Sandy Desert of Western Australia is an issue of quite a different order.

NRHA: Yes we do. For instance your government is making a great deal out of the potential development of Northern Australia – which has quite a number of people excited. It seems illogical to consider closing up existing communities in the North at the same time as major plans are being evolved for its development.

NRHA: Yes we do. We understand that the rivers will never flow south to water the inland – so our expectations need to be constrained by physical, ecological, cultural and social realities. But we must have a dream for the less populated parts of this great nation. To sit on our hands and let our major cities become even more congested is not a good way forward in the longer term. We need more middle-sized cities. We need more equity of opportunity. We need better distribution of good health and wellbeing. And it’s our view that inequality is a political problem, not an economic one.

** For an actual interview with Gordon Gregory, see this clip.

Meanwhile, people around the country have been taking to city streets to protest against the closures of remote communities… 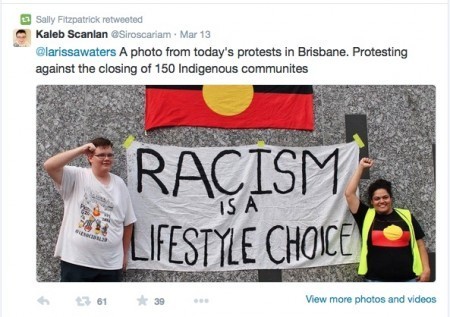