Save the date: #IHMayDay15 is coming your way, soon…

Friday, May 29 has been declared a day of action and listening on Twitter on all matters to do with the health of Aboriginal and Torres Strait Islander people.

#IHMayDay15 is a day for Aboriginal and Torres Strait Islander people to share their views and knowledge about some of the wide-ranging issues affecting health, and for non-Indigenous people to participate by RT-ing and listening.

It is the second such event, following the successful #IHMayDay held on 1 May last year, which generated almost 26 million Twitter impressions in one day, and trended number one nationally on Twitter during the day.

This year, #IHMayDay15 will be moderated by James Cook University Nursing, Midwifery and Research academic Dr Lynore Geia, a Bwgcolman woman woman from Palm Island; and by Summer May Finlay, Yorta Yorta woman, a public health practitioner and PhD candidate based in Canberra.

The event will again be hosted by Croakey, and is being held in collaboration with @IndigenousX and NACCHO. Croakey’s @WePublicHealth account will also support the event.

Dr Geia encourages Croakey readers to engage with #IHMayDay as an opportunity to contribute to strengths-based discussions and counter-narratives about Aboriginal and Torres Strait Islander peoples’ health.

“We would like the day to provide a constructive critical discourse on Indigenous health.

“We do not all have to agree about everything, but I encourage everyone to engage in the discussions with respect and goodwill, and to refrain from personal attacks.”

Dr Geia is to present on #IHMayDay (2014) at the National Rural Health Conference in Darwin on May 27, as an example of decolonising methodologies in action.

She said an increasing number of Aboriginal and Torres Strait Islander peoples are embracing and claiming Twitter, this “cyber message stick space”, to share Indigenous ways of being and doing through telling their stories, sharing messages of survival, resistance, and resilience, and promoting culture and creativity through counter stories.

“Social media platforms like Twitter are proving effective tools for decolonisation, while enabling Aboriginal and Torres Strait Islander peoples to communicate and engage with wider Australia and beyond, to other nations and other Indigenous peoples.”

“Unlike any other platform, Twitter, through #IHMayDay15, allows Aboriginal and Torres Strait Islander voices to be privileged on the health issues facing us and the solutions. It shows our capacity and strength to manage our own affairs.

Not only are our voices privileged, it is a platform for people who we don’t traditionally hear from. I think it is so important to demonstrate the variety of opinions among Aboriginal and Torres Strait Islander Peoples to dispel the myth we are a homogenous group.”

The #IHMayDay15 program, which will be published closer to the time, will run from early in the morning until late evening. We will be encouraging people to tweet in photos from where they are participating, and about what health means for them (join the conversation that has been started by the tweets below).

Dr Geia and Melissa Sweet will participate in an #IHMayDay15 event IRL at the Discipline of Nursing, Midwifery & Nutrition at the James Cook University Townsville campus, which will be an opportunity to merge the online and offline discussions.

Croakey readers are invited to follow the discussions at #IHMayDay15.

We also encourage communities, individuals and other organisations to do likewise – stage an #IHMayDay15 get together, to share the tweets and widen the discussions. And tweet us your photos!

Please mark 29 May in your diaries.

And the #IHMayDay15 discussions have already begun… 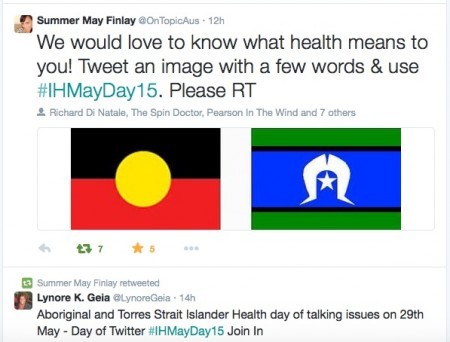 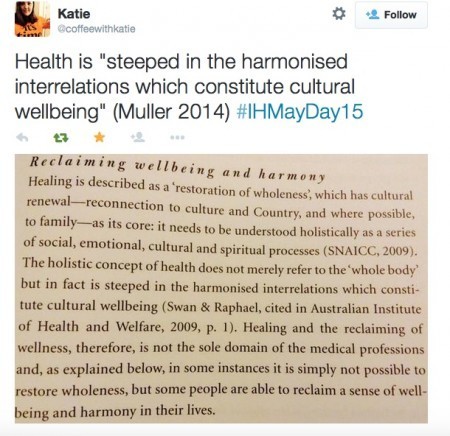 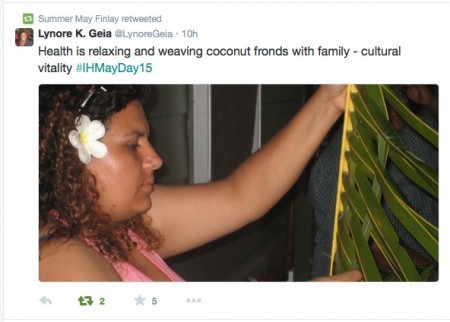 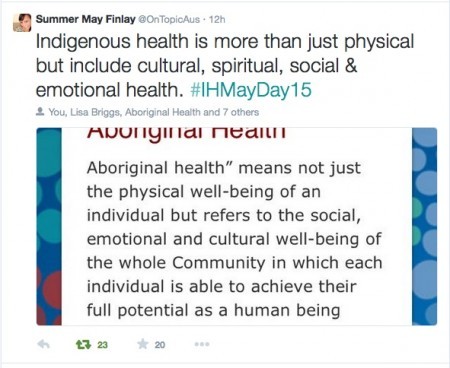 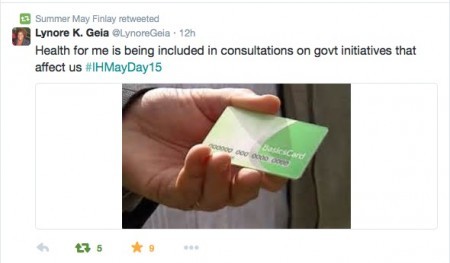 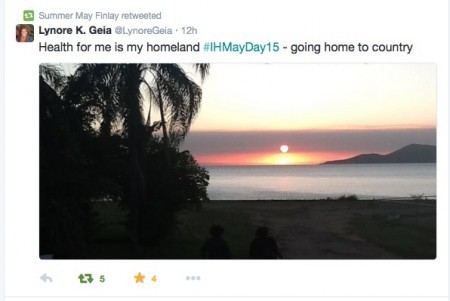 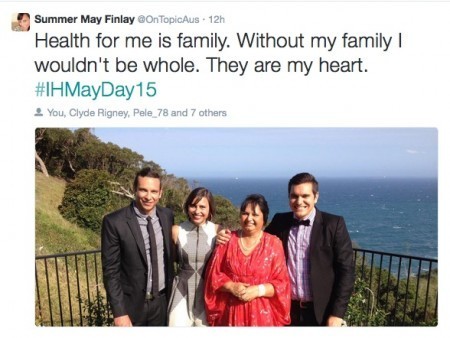 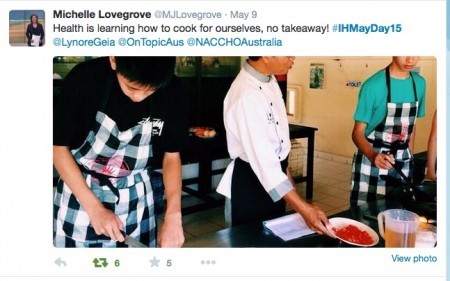 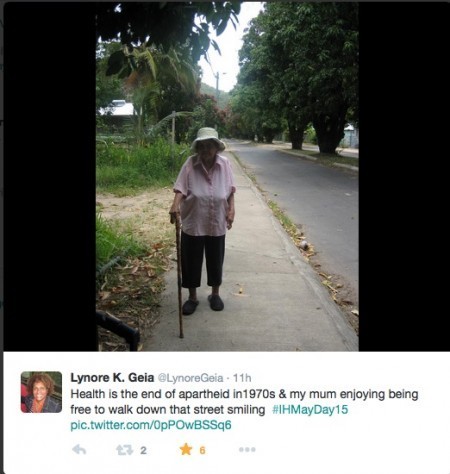 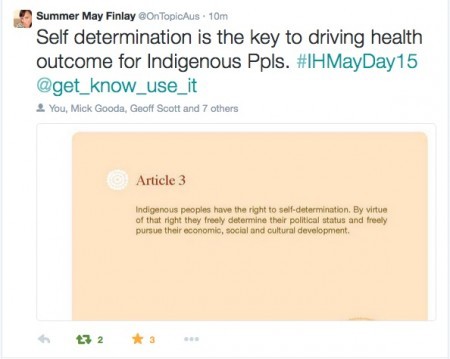 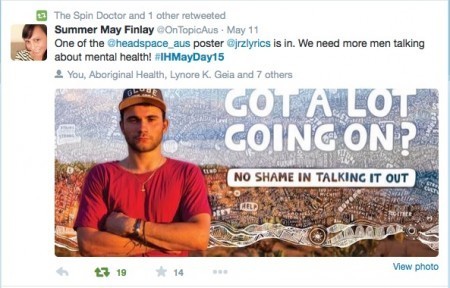 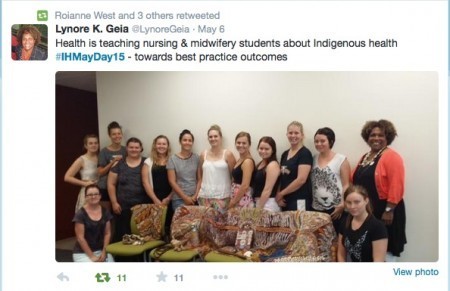 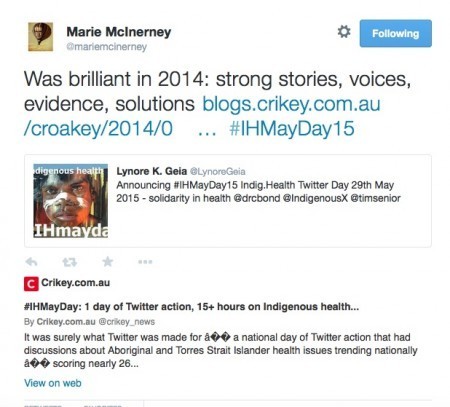