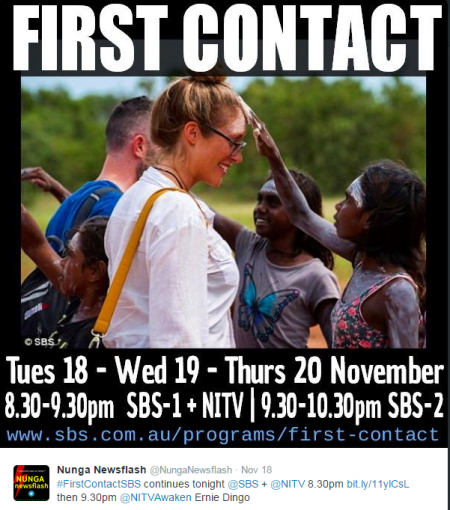 Thanks to The Conversation for permission to share this reflection on the SBS/Blackfella Films production First Contact by Dr Chelsea Bond, Senior Lecturer in the Aboriginal and Torres Strait Islander Studies Unit at the University of Queensland.

Bond is an Aboriginal (Munanjahli) and South Sea Islander Australian and has extensive experience in Indigenous health, as a health worker and researcher in urban and rural communities across south-east Queensland for over 15 years.

Award-winning Aboriginal writer Siv Parker, who also has longstanding experience in the health sector, has also been writing about First Contact at her On Dusk blog.

See also some of the discussions SBS has led about the program.

Over the three episodes, we saw the participants get their “first contact” with Aboriginal Australia as they were welcomed into the homes of Aboriginal people in the city and in the bush.

Clearly the television series hit a nerve, sparking a plethora of conversations around the country.

These conversations tell us more about the relationship between Aboriginal and non-Aboriginal Australia than the racist soundbites in the show’s promo clip.

TV viewers were understandably outraged at the views expressed by First Contact’s cast members. But as the nation gathers to vilify them, we must remember they are a product of the nation they live in … that we all live in.

A nation that struggles to teach its own history in its schools.

A nation which suspends the Racial Discrimination Act to “protect” Aboriginal people.

A nation that asserts its right to be bigots.

A nation that insists Aboriginal people celebrate the day their country was invaded.

A nation where its Prime Minister declares himself the PM for Aborigines and cuts funding to Indigenous communities; who believes Australia was “nothing but bush” before white settlement; who defines the authenticity of his colleague’s Aboriginality based on where they live and who believes that “Aboriginal women are cowering in their huts”.

Gee, when Abbott finds out that the Aborigines live in houses (albeit it, ridiculously overcrowded ones), he will be as disappointed as First Contact’s Bo-Dene was when she realised the mob in north-east Arnhem Land wore shoes!

The cast-members reflect who we are as a nation. But their transformation over the series is an optical illusion – or delusion – of Australian race relations.

For a moment we are led to believe that the oppressive hierarchical relationships between Aboriginal and non-Aboriginal Australia could be refigured. But this momentary shift was short lived, as Channel Nine’s Today Show demonstrated earlier this week, in their review of the first episode.

I assumed The Today Show’s The Grill was going to reflect on the racism revealed in the show.

Commentator Miranda Devine launched a critique of the show by expressing her concern about the portrayal of negative stereotypes. I was about to agree, until she clarified that she meant the negative portrayal of the (white) women as racist.

Also, in episode one we didn’t actually meet welfare-dependant Aboriginal people; we met Aboriginal people in Redfern leading crime prevention initiatives, while paying off their mortgage, and barbecuing like real Aussies (as opposed to munching out on bugs).

We also witnessed the cultural resilience of Marcus Lacey and his extended family in north eastern Arnhem Land who graciously engaged with these “outspoken Aussies”.

Despite this, the Today Show focused their analysis on “the problem of Aboriginal dysfunction” rather than the cast members’ ignorance. The “Aboriginal problem” is a pervasive discourse used by white Australia to absolve itself of any responsibility to past and present injustices experienced by Aboriginal people.

It is this discourse that Aboriginal activist and actress Rosalie Kunoth-Marks so famously challenged on ABC’s Q&A program earlier this year.

But alas, even First Contact’s host Ray Martin explained the show by stating:

I think every Australian realises that the Aboriginal problem, quote unquote, is our festering sore.

The discourse of the “Aboriginal problem” demonises Aboriginal people and is a dangerously alluring concept that we as Indigenous people sometimes perform to.

Demonisation leads us to believe that we are culpable for the racial oppressions inflicted upon us. It is the belief (often instilled in us by our parents) that if we work hard (or 10 times harder) we can prove ourselves to white Australia.

Yet, many of us have done just that, and now are subjected to a different brand of Australian racism – the one that tells us that our success and accomplishment voids our claim as “real Aboriginals”.

Suggesting that Aboriginal people remedy the racism we encounter is like telling the battered woman that she can escape domestic violence by just behaving better. Racism cannot be cured in this country by enlisting Aboriginal people to perform palatable, perfect or culturally pure renditions of Aboriginality.

Racism is not about the capacity of Aboriginal minds or bodies – it is about the psyche of the racist, and the psyche of a nation which has yet to “recognise” or “reconcile” Indigenous sovereignty and their own illegal occupation.

That, Ray, is the deep festering sore of this nation.

You can watch First Contact on SBS On Demand.