Looking upstream for the causes of mental health problems

Science Meets Parliament, scheduled to take place this week in Canberra, is now in its nineteenth year.

Over February 14 and 15 2018, around 200 scientists and technologists will meet with parliamentarians, hear from key figures in Australian science and undergo professional development.

Positive outcomes from previous events are clear, both for attending scientists and members of the parliament. But that doesn’t let the rest of us off the hook.

Science Meets Parliament focuses on building understanding and connections between federal parliamentarians and those working in science and technology to ensure that science stays on the political agenda. It promotes the idea that science is important for economic and environmental reasons, but also that science has sociocultural value.

There is no doubt in these politically and socially turbulent times that this type of activity is more important than ever, even here in Australia where trust in science and scientists has remained relatively high. Globally science is under threat. It faces not only budget cuts, but also censorship of data, language, and researchers, and pressures to abolish science-related governmental agencies.

However it’s important to examine what needs to happen during and after Science Meets Parliament for impact to occur and be sustainable. And that requires all of us to step up.

Information is not enough

The field of science engagement and public understanding of science stresses that simply conveying information is not sufficient. The deficit model – where experts explain the science to people to change their beliefs or behaviours – has long been discredited.

The deficit model tends to persist in action because simply talking “at” people feels more comfortable or familiar than other approaches. But research shows that providing information and increasing scientific literacy in fact can contribute to polarisation. It can make people more sceptical or conflicted, especially about emerging technologies or complex policy decisions with scientific underpinnings.

True engagement must involve not only a focus on facts and technical details, but also the underlying values. Scientists can be encouraged to present their discoveries and success stories, but also to tell us about the bumps, warts, and complications of science as a human practice. Our understandings of the world have evolved over time, often in non-progressive and unexpected ways – and the history of science has repeatedly shown this. Consider stomach ulcers, which were thought to be caused by stress but are now known to be linked to bacterial infection.

It is essential to deliberately design interventions that catch the attention of parliamentarians not only over the two days of Science Meets Parliament, but also over longer time frames and through engagement with local, community-based initiatives. Scientists need not just provide information, but also wrestle with deeper issues associated with people’s fears and hopes about what science and technology can contribute.

Trust me, I’m an expert

There are some risks in speaking publicly as a scientist. Scientists need to be cautious about positioning themselves as experts on everything, as being seen as politically or socially superior, or as somehow more well-placed than others to dictate how society should shape itself.

Science Meets Parliament is tricky territory, as scientists become lobbyists for their field, and may risk being viewed and treated as just another interest group which is rent-seeking rather than promoting the broader social good. The answer to this dilemma is not to stress how science is special or different, or why scientists are objective authorities and hence more deserving than other causes. Instead, scientists need to be honest – to talk about what science is, and isn’t. The outside or even the inside observer can have a rarefied view of science, which can result in overblown expectations. 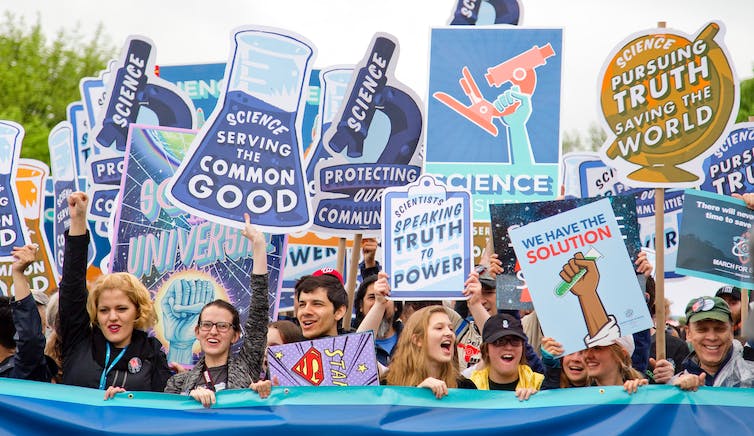 Science is good! But it doesn’t exist in isolation./Vlad Tchompalov on Unsplash

Science is a form of knowledge which often competes with other forms of knowledge, but ideally collaboration should be the goal here.

Some groups (for instance, Aboriginal and Torres Strait Islander peoples) have unique knowledge systems and experiences which can fruitfully contribute to science-based activities including management of Australia’s natural resources.

Scientists are engaged in a practice which is simultaneously scientific and social. The norms which govern it have been negotiated over time and evolved since the professionalisation of scientific fields, including everything from peer review to standards of reproducibility and statistical significance, which also differ across particular subspecialities.

Various fields within science use different techniques and approaches, and even have diverse ways of weighing up evidence or considering risks (and benefits): consider views of public health practitioners as compared to plant scientists on genetic modification.

Parliamentarians and indeed members of the public should be encouraged to confidently view science as a heterogeneous undertaking. This will will not weaken the status of science in society, but should allow it to maintain and indeed build public trust.

We’re all in this together

The average scientist – that is, she or he who will not be at Science Meets Parliament – is a critical part of this picture.

We tend to focus on those who are professional scientists, without considering scientists in training, those involved in various scientific and technological applications, or even everyday people who use science in their jobs, homes, and communities. Instead of making science special, technical, and inaccessible, all who use and depend on science need to be encouraged to engage with it.

The growing citizen science movement presents one strategy, particularly when used to help to solve pressing community problems in which there are likely to be shared interests, for instance in the case of the Flint water crisis.

In turn, involvement in these sorts of initiatives allows members of the public to participate in decision-making and priority setting for their communities, build community capacities (not just in science and technology but important sociocultural skills), and more generally empower communities.

To truly achieve the goals of Science Meets Parliament, we need “Science Listens, Engages, and Collaborates with the Public” not only for two days in February, but every day.

Rachel A. Ankeny is Professor of History at University of Adelaide

Coming home to roost: so many areas of policy failure and neglect