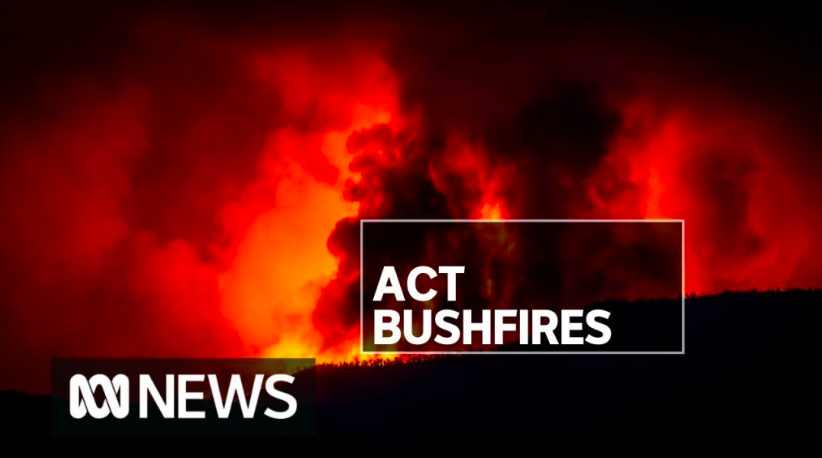 Introduction by Croakey: Nearly 300 scientists with expertise in climate, fire and weather science have published an open letter to Australian politicians on the eve of the 2020 parliamentary sessions urging Australia to make deep cuts to greenhouse gas emissions.

The letter draws together the scientific evidence they say “unequivocally links human-caused climate change to the increasing risk of frequent and severe bushfires in the Australian landscape”.

It comes ahead of Tuesday’s resumption of Parliament, and after a weekend where bushfires once again threatened the national capital, the latest in a devastating season of bushfires across the nation.

One of its organisers, University of NSW climate scientist Professor Katrin Meissner, slammed the policy inaction in Australia in a media statement accompanying the letter. She said:

The thick, choking smoke haze of this summer is nothing compared to the policy smokescreen that continues in Australia.”

Another of the 274 signatories is Michael Mann, Distinguished Professor of Atmospheric Science and Director of the Earth System Science Center at Penn State University in the US.

In an Opinion piece at Guardian Australia, he said on Sunday that Australia’s horrific bushfires could be the catalyst that pushes the world to a mass recognition that it’s time to act on climate change. He said:

If there can possibly be a silver lining to the clouds of smoke from the bushfires, it is that they are galvanising public opinion, making it clear that deniers’ and delayers’ rhetoric is a smokescreen to cover for the fossil-fuel industry.”

Here below is the full text of the letter, and links to references and the list of signatories.

Acknowledgement of Country
We acknowledge the Traditional Custodians of the lands and seas across Australia. We recognise their continuing connection to Country. We acknowledge their continued custodianship of the continent, including the role of Indigenous knowledge and practices in land management and Indigenous fire burning. We pay our respects to Elders past, present, and emerging, and extend that respect to all Aboriginal and Torres Strait Islander peoples.

Executive summary and call for action

Scientific evidence unequivocally links human-caused climate change to the increasing risk of frequent and severe bushfires in the Australian landscape. That same science tells us these extreme events will only grow worse in the future without genuine concerted action to reduce global emissions of greenhouse gases.

We, the undersigned climate, weather and fire scientists, call on our country’s leaders and policymakers to develop science-informed policies to combat human-caused climate change. To be successful, these policies must urgently reduce Australia’s total greenhouse gas emissions and lead to constructive engagement and agreements with other world leaders for coordinated global climate action.

We call on our leaders to unite to develop non-partisan, long-term policies that will enable the managed transition to net zero greenhouse gas emissions by 2050 that the scientific evidence shows is required to avoid dangerous human-caused climate change. The science is clear. It is time to show leadership and set a clear path to protect our country and way of life for future generations.

This statement summarises the scientific basis for the links between climate change and bushfires in Australia, and the climate action that is required to limit further worsening of our bushfire risk and build a stronger and more resilient Australia.

The severity, destructiveness and unprecedented scale of the 2019/20 bushfires in eastern and southern Australia1 have generated public discussion on the role of climate change in this crisis. This statement summarises the scientific knowledge on how human-induced (anthropogenic) climate change is affecting bushfires in Australia.

Human-caused climate change is increasing the risk of fires in various regions of the world, including Australia2-6. Fire activity is controlled by four limiting factors7: (i) a fuel load (vegetation biomass); (ii) the fuel being dry enough to burn; (iii) an ignition source (anthropogenic or lightning); and (iv) weather that is conducive to carrying that fire through the landscape (e.g. high temperatures, wind speed and low humidity). Climate influences all four of these factors7-10.

Australia’s climate is warming as part of an unequivocal global warming trend11,12. Human activities have so far caused 1.0°C of global warming above pre-industrial levels13.

Drought, high temperatures and low relative humidity all lead to low fuel moisture content. Extremely hot and dry conditions in 2019 were preceded by a widespread and sustained drought across eastern Australia that began in 2017. Drought conditions meant that fuel availability (leaf shedding) and fuel dryness created ideal conditions for extensive burning at the start of this fire season across millions of hectares of forest, including temperate forests and rainforest ecosystems.

December 2019 had the highest fire potential of any month since Forest Fire Danger Index (FFDI) records began in 195014. The FFDI is a metric calculated using temperature, relative humidity, wind speed, and a drought factor to represent fuel availability. Days with high FFDI are indicative of conditions where fuels burn readily and fire containment is less likely, leading to large fires that travel long distances17 as seen across broad swathes of southern and eastern Australian in 2019/201.

Human-caused climate change has already contributed to more dangerous weather conditions for bushfires in Australia18-19. This includes observed trends towards more dangerous conditions during summer, and an earlier start and later end to the fire season, particularly in southern and eastern Australia18-20. The frequency of major bushfires in southeast Australia has approximately doubled since 190021. Urgent studies to quantify how much additional risk human-caused climate change brought to the 2019/20 fire season in Australia have already begun22.

Further lengthening of the fire season and more frequent and more extreme fire-weather are expected into the future due to ongoing human-caused climate change23,24. Fire management measures such as hazard reduction burning are of diminishing effectiveness under extreme wildfire conditions25,26. The future availability of suitable hazard reduction burning days is highly uncertain27.

Large, intense fires can develop thunderstorms in their plumes — a phenomenon known as pyrocumulonimbus (pyroCb). PyroCb events are characterised by erratic fire behaviour, swarms of embers, lightning, and strong and variable winds. Large pyroCb events can have catastrophic impacts on society and the environment, as seen for the 2009 Black Saturday and 2003 Canberra bushfires.

There has been a steady increase in the frequency of pyroCb events recorded over southeastern Australia since monitoring began in the late 1990s21. During the 2019/20 bushfires, approximately 30 pyroCb events have been observed so far, grossly exceeding the number of events to have occurred in any previous year28. This is consistent with observed climate trends over the last several decades towards more dangerous weather conditions that are conducive to pyroCb development21,29. Climate models indicate that ongoing warming will cause further increases in the potential for extreme bushfires with pyroconvective conditions over southeast Australia23,30.

The El Niño-Southern Oscillation (ENSO) is a leading cause of natural year-to-year variability in Australian weather, with El Niño events generally causing an increased risk of dangerous bushfire conditions18,31. It is noteworthy that the 2019/20 extreme fires occurred despite the absence of a strong El Niño event. However, extreme El Niño and La Niña events are expected to increase in frequency through the 21st century32-34, which may also intensify bushfire hazards in the future.

During 2019 a very strong positive Indian Ocean Dipole (IOD) event occurred in the tropical Indian Ocean, and contributed to the extreme heat and extreme dry conditions experienced across Australia during the second half of 2019. There has been an increase in the frequency and intensity of positive IOD events since the 1960s35-37, which has worsened drought and fire risk in southeastern Australia38,39. It is projected that similar strong positive IOD events will be three-times more frequent in the 21st Century compared to the 20th Century with continued high greenhouse gas emissions in the absence of effective climate policies40,41.

The Southern Annular Mode (SAM) has become more positive since the mid-20th Century, caused by both rising greenhouse gases and ozone depletion15,42-44. A more positive SAM has resulted in a shift in the storm tracks that bring rain bearing systems across southern Australia and caused a long-term decline in winter rainfall across southern states5,12,15. This rainfall decline is expected to continue into the future, but has the potential to be reversed through strong greenhouse gas mitigation that halts further warming and stabilises global climate15,16.

During spring and summer of 2019 a rare sudden stratospheric warming event occurred over Antarctica and caused the SAM to temporarily shift to a negative state. A negative SAM at this time of year increases the forest fire danger in eastern Australia by reducing cloud cover and drawing hot and dry air across the continent to the eastern states45. It is not yet known if climate change will alter sudden stratospheric warming events over Antarctica in the future.

Scientists have studied and communicated the increasing risks that climate change will bring in Australia and other continents in the form of altered fire regimes for more than three decades. This includes reports prepared at the request of governments to aid in policy decisions.

Observed changes in Australian climate and fires, including the 2019/20 fire crisis, have confirmed scientific warnings that human-caused climate warming is virtually certain to increase the duration, intensity and frequency of fires in southeast Australia5,24,46,47. These trends will continue to worsen with ongoing climate warming and changes in extreme weather phenomena, making fire management increasingly challenging5.

Urgent and ambitious action to reduce greenhouse gas emissions is needed if we are to pursue efforts to limit global warming to 1.5°C above pre-industrial levels, in accordance with the Paris Agreement13. Current Australian and global emission reductions are not sufficient, and Australia’s current emissions per person are near-to the highest in the world.

Scientific evidence indicates a need for immediate action to reduce total greenhouse gas emissions and manage a rapid transition to net zero emissions by 205013 if we are to limit the many climate change risks facing the Australian people, economy and environment. Australia has an important role to play in reducing our total emissions, while also taking a leadership role in international climate negotiations to foster a spirit of global cooperation and urgent action on climate change at the level documented in the scientific assessment of the IPCC Special Report on Global Warming of 1.5°C13.

Bookmark this link to track Croakey’s coverage of the bushfire crisis.
FacebookTwitterLinkedINWhatsappPinterestEmail