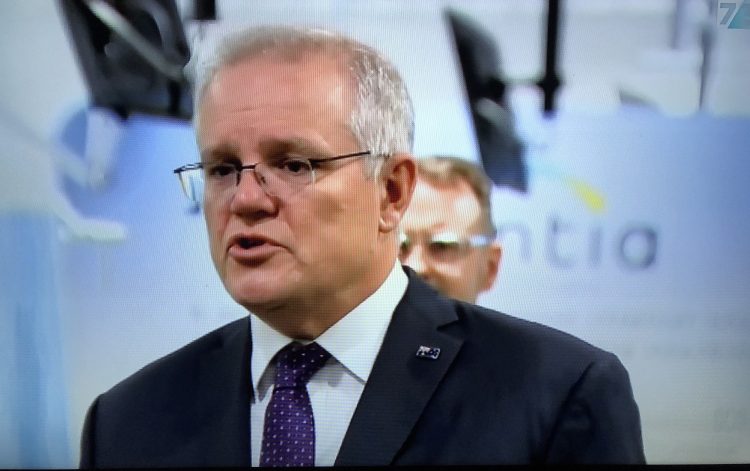 Is the media turning on the Prime Minister? Screenshot from ABC TV

Scott-free no more? Why the Prime Minister’s smooth media run may be coming to an end

Introduction by Croakey: While watching a broadcast from a Senate Estimates hearing today, journalist Rick Morton observed that Aged Care Minister Richard Colbeck “looks like he would rather be anywhere else, like the Mariana Trench”.

With increasing public and media scrutiny of the Federal Government’s pandemic management, it’s not only the health and aged care ministers who are finding their seats uncomfortably hot.

The Prime Minister is also coming under unprecedented pressure, and this past week may mark a turning point in his portrayal by the mainstream media, suggests media scholar Dr Denis Muller. His article below was first published at The Conversation. 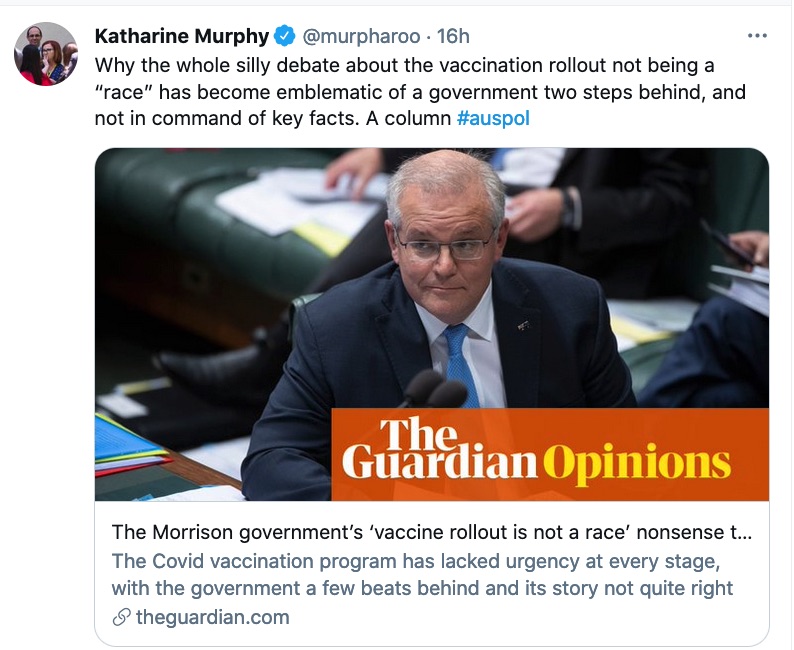 Katharine Murphy, The Guardian Australia’s political editor, marvelled recently that Scott Morrison pulls what she called a “Jedi mind trick”, rebadging disasters as triumphs – and getting away with it.

I don’t know enough about the Jedi to say if this is true, but it is certainly the case that despite allegations of corruption (Leppington land scandal, grants rorts), sleaze (where to start?) and incompetence (quarantine, vaccination), public opinion polls show Morrison’s standing as prime minister has suffered little.

Many prime ministers have been sunk by much less, so what is going on?

Read more: Coalition and Morrison gain in Newspoll, and the new Resolve poll

No doubt there are many answers.

One is Morrison’s highly developed skills as a political operative and communicator.

He has a talent for delivering cut-through lines and exploiting the theatre of politics: dressed up as a scientist one day, a chef the next, a construction engineer the next and finally an airline pilot, all in the space of a week.

It gives him evening television news exposure on his own terms in tightly controlled and contrived settings.

Morrison also has the knack of becoming invisible when trouble strikes.

Trouble in aged care? Wheel out Aged Care Minister Richard Colbeck. Trouble with the vaccine rollout? Send Health Minister Greg Hunt to front up to the ABC’s 7.30 or Seven’s Sunrise program. Trouble with the alleged rape of Brittany Higgins? Set up a blizzard of inquiries.

All these tightly controlled strategies dictate to a considerable extent the way the media portray Morrison in day-to-day news coverage.

Reporters are required to report what happens. In responsible media outlets, they may analyse but not comment. They are also trapped on the 24/7 news cycle’s relentless hamster wheel.

Television bulletins need pictures, so the prime minister dressed up as something gets a run, regardless of its banality or propaganda effect.

However, the COVID outbreak in Victoria and the subsequent lockdown has resulted in the media portraying the prime minister in a somewhat different light.

It is a subdued light because, once again, he isn’t there. After uttering the superficially persuasive but epidemiologically ludicrous claim that hotel quarantine was “99.9% effective”, he disappeared for a happily timed meeting with Jacinda Ardern in New Zealand.

The efficacy of this disappearing trick becomes obvious from an analysis of the coverage of the Victorian lockdown in four daily newspapers over Friday and Saturday, May 28 and 29.

Across The Australian, The Sydney Morning Herald, The Australian Financial Review and the Daily Telegraph, there were 50 stories dealing specifically with the lockdown. Morrison was mentioned in just 15 – just under one-third.

Many of these mentions simply repeated his brief non-committal remarks on the crisis: Victoria’s proposal for a purpose-built quarantine station was “useful”; Victoria would be “supported”. A couple reprised his assertion last January that the vaccine rollout was “not a race” or a “competition”.

Confronted with the fact that 29 aged care homes in Victoria still had not administered a single dose of the vaccine, Morrison was able to get away with repeating his mantra that he was committed to saving lives and livelihoods. He had not answered the question but there was no reported follow-up.

However, over the weekend there emerged clear signs that influential elements in the media have begun to attach responsibility for what is happening in Victoria – and Australia more widely – primarily to Morrison and his government.

Peter van Onselen in The Australian, Peter Hartcher in The Sydney Morning Herald and Phillip Coorey in the AFR all wrote penetrating critiques of Morrison’s performance. So did Rick Morton in The Saturday Paper and Katharine Murphy in The Guardian Australia, who wrote “the age of accountability has dawned”.

Van Onselen wrote it was hard to escape the conclusion that Morrison’s stubbornness over the building of proper quarantine stations, and failure to secure better deals on mRNA vaccines, were part of what he called Australia’s “coulda”, “shoulda”, “woulda” approach, and that Morrison’s response to Albanese’s criticisms was “weak”.

Hartcher’s column was illustrated by a cartoon of Morrison snoozing in a hammock as last week’s super moon loomed over him sprouting COVID crowns. It carried the headline, “PM’s complacency is infectious”.

Coorey noted that, in contrast to what happened with previous lockdowns, the key difference this time was that blame was starting to fall on the federal government. It had become patently obvious that until a sufficient proportion of the population had been vaccinated, Australia would remain “welded in its own gilded cage”.

In the paradoxically competitive yet incestuous world of political journalism, these people are opinion leaders. What they have written will colour the questioning of Morrison when he reappears and the way his responses are portrayed. It will also influence the approach taken by their editors in formulating arguments for their newspapers’ leading articles.

The longer Morrison delays re-engaging with this issue, the bigger the mess he will have on his hands.

Acting Prime Minister Michael McCormack distinguished himself on Sunday by sticking to Morrison’s line that “it isn’t a race”. Asked about this at his media conference on Sunday, the acting Victorian premier, James Merlino, was incredulous. “That was said today?” he asked the reporter who put it to him. “There you go.”

Dan Tehan, the trade minister, despatched to the ABC Insiders program to answer for the government, did no better.

These two examples show how easily the media can make monkeys of politicians who lack Morrison’s extraordinary media management skills.

But PR stunts and reliance on the short attention span of the media go only so far. This weekend may have marked a turning point in the portrayal of Scott Morrison.

And here you can watch the Health Department’s secretary, Dr Brendan Murphy, respond to questioning about whether the PM threw him under a bus by suggesting that Murphy was the source of the Government’s angle on the vaccination rollout, that “it’s not a race”. 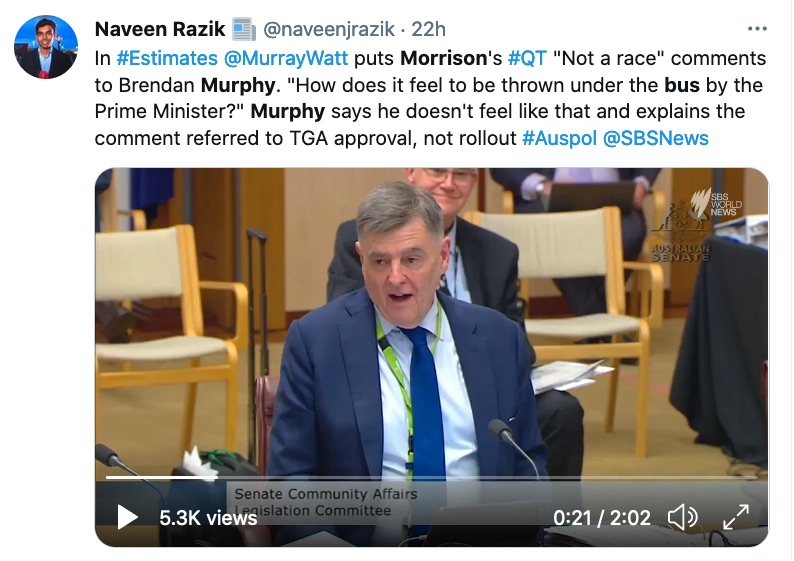 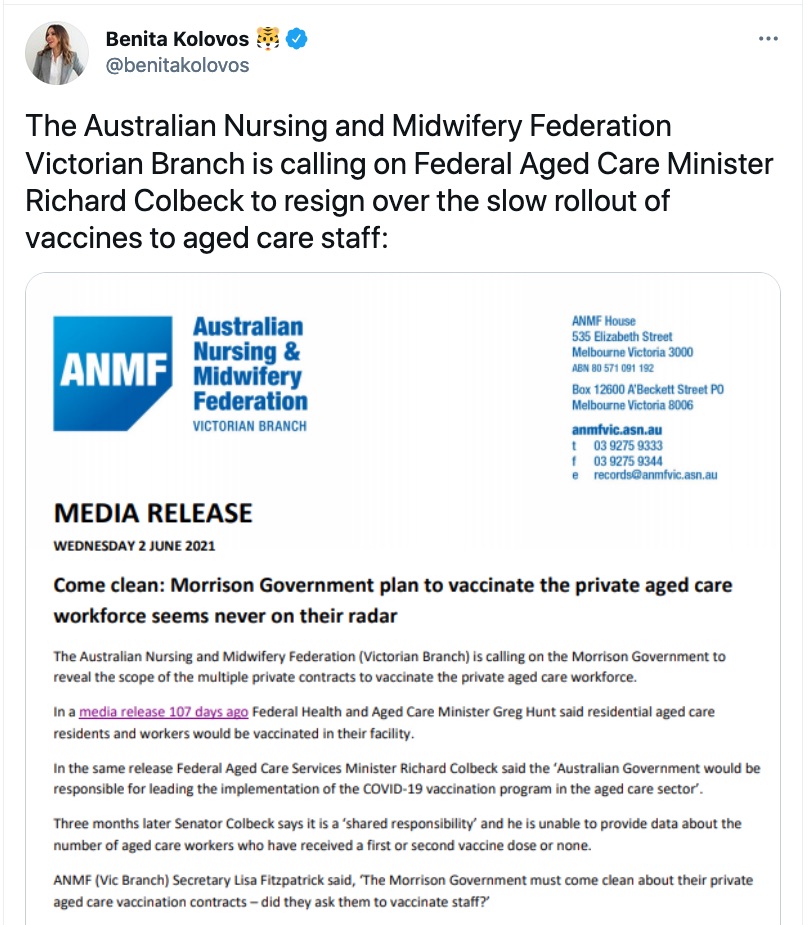 See Croakey’s archive of stories on media and health.

PrevPreviousJune Oscar: Truth for change, reckoning with our past and transforming our nation
NextJoin us for an online discussion about digital platforms and public healthNext