Seeking a voice for health in the Trans-Pacific Partnership negotiations

Dr Deborah Gleeson describes her struggle to put health issues on the agenda of the Trans Pacific Partnership Agreement negotiations. Deb will be in Singapore representing the PHAA during the meeting – follow her progress via Twitter @DrDebGleeson. She writes:

This week I’m heading to Singapore for a meeting to which I’m not invited.  Trade ministers from twelve countries will gather from 7-10 December for the last scheduled meeting for the Trans Pacific Partnership Agreement negotiations. I’ll be hovering at the margins, hoping for an audience. Why? There’s a lot at stake. The future of many aspects of our health system – and those of other countries around the Pacific Rim – hangs in the balance. So too do the lives of hundreds of thousands, perhaps millions of people. 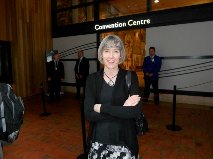 It was around two and a half years ago when I first heard reports that Australia was engaged in trade negotiations that could result in harm to our health. I heard that the United States was proposing rules for the Trans Pacific Partnership that would raise the cost of medicines and that could give new rights to big transnational corporations such as tobacco companies to sue our government over its public health policies. Few people seemed to be aware of what was being proposed.

I was galvanized into action.

At the time, my knowledge of trade policy and international trade law was sketchy. Knowing I couldn’t do much on my own, I worked with other concerned colleagues to gather public health and other experts together for a round table discussion with officials from the Department of Foreign Affairs and Trade (DFAT).  What I heard there worried me greatly.

While the Labor Government of the day had made explicit commitments not to accept anything in its trade agreements that would undermine the PBS or tobacco plain packaging, the level of secrecy surrounding the negotiations was such that it was difficult to know how these commitments were being carried through. Negotiating texts were not available to the public and the information provided by DFAT was very broad and general. While I was to some degree reassured about the government’s intentions, it was impossible to know how these intentions would translate into the final agreement.

Not long afterwards, several US proposals for the TPP were leaked, including a draft intellectual property chapter and an annex on healthcare technologies. These documents heightened my concerns. The US was clearly seeking to make changes to the health systems of other countries in the interests of its own big businesses.

Since then, I’ve spent a great deal of time talking and writing about the TPP, analysing leaked negotiating documents and attending ‘stakeholder’ events at TPP negotiating rounds. I’ve had countless discussions with trade negotiators from Australia and many other countries, written technical briefs and submissions, and published academic papers about the TPP. I’ve talked to officials from DoHA and AusAID and briefed politicians about the health issues. I’ve given many seminars and presentations, issued media releases, given interviews and written opinion pieces.  And my concerns remain.

At times it’s been exhausting and frustrating. I often feel like I’m working in the dark and it sometimes seems absurd to be talking to negotiators about text which I haven’t seen and they can’t describe in any detail. I’m up against some very powerful interests – industries that have not only huge resources at their disposal but also privileged access to the TPP text. Governments are not always interested in hearing about health issues when having to address them might get in the way of advancing the interests of their exporters. One of the worst moments for me was arriving in New Zealand in December 2012 for the TPP negotiations, only to find I had no access to the negotiating venue except for the one day of official stakeholder events. The security guards lined up at the door were a visible reminder of the powerful interests working to exclude voices like mine. 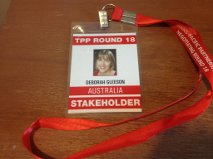 What keeps me going in moments like this is the certainty that many lives are at stake. Medicines like HIV/AIDS and cancer drugs are already priced out of reach for many people in countries like Vietnam, and the US proposals for the TPP would make this scenario much worse. Even in wealthy countries like Australia, a significant proportion of those on low incomes already postpone purchasing or go without necessary medicines due to the cost.

Likewise, if Big Tobacco gains additional avenues to challenge tobacco control measures like our tobacco plain packaging laws, governments in less well-resourced countries are likely to be deterred from following suit, and more people will die from diseases caused by smoking.

I’m encouraged by the growing number of health professionals, academics and organisations involved in what’s now a large network of people in Australia – and many other countries – who are concerned about the potential impact of the TPP on health. Of course AFTINET, the Australian Fair Trade and Investment Network, has been monitoring Australia’s trade relations for many years, and was first on the case in the early stages of the negotiations. AFTINET’s convener, Dr Patricia (Pat) Ranald, has won a public health award for her efforts. Pat is a tireless campaigner with an unerring sense of strategy, and without her leadership there would be no Australian campaign for a fair deal in the TPP.

Together with AFTINET, the Public Health Association of Australia has largely led the health sector advocacy in Australia and I am deeply indebted to Michael Moore and Melanie Walker, along with the Political Economy of Health Special Interest Group of PHAA, and the People’s Health Movement Australia (PHM Oz). Michael has always provided unqualified support and I will never forget the day he drove from Canberra to Sydney on a public holiday (and his wedding anniversary) in order to explain PHAA’s concerns to some hard-nosed US trade officials who were visiting Australia to lobby our government. Of course many other people have contributed to the advocacy movement in Australia – too many to name here – and I’m very grateful to those who’ve shared with me their legal knowledge and technical expertise.

But while there has been a growing advocacy movement and a groundswell of public opposition to the US proposals for the TPP, we are now at a critical point.

Our new government’s stated priorities are to advance the interests of Australian exporters and to conclude trade agreements as quickly as possible. The Coalition’s Policy for Trade, issued on the day before the election, does not mention health at all.

Worryingly, the government recently conceded during debate in the Senate that it was prepared to negotiate an investor-state dispute settlement clause (allowing corporations to sue the Australian Government in international tribunals) in the TPP. A recently leaked draft of the intellectual property chapter seems to indicate that Australia may not be supporting other countries in resisting the outrageous US proposals for patents and medicines, and may even be siding with the US on some issues. And the entire transparency chapter annex, for which the US has proposed a suite of provisions that would undermine the PBS, may go to the political level for a decision next weekend.

As the final meeting approaches, many key issues remain undecided. Trade ministers can only conclude a deal by their self-imposed deadline of the end of 2013 if they make difficult political decisions and compromises. This is the “horse trading” that Tony Abbott referred to after the APEC meeting in September.

Any commitments made by our government at the meeting next weekend would be a high-stakes gamble indeed. There is a strong possibility that any US commitments will be picked apart by Congress, with growing doubt that Congress will agree to the “fast track” process that the USTR needs to ensure that US promises are deliverable. 151 Democrats and 23 Republicans in the House of Representatives have now indicated they are not prepared to agree to “fast track” the TPP.

In this non-transparent, non-democratic game, the Australian government is not showing its hand; we have few indications of what trade-offs our government might be prepared to make. What we do know is that many aspects of our health system – our patent laws, our Pharmaceutical Benefits Scheme, our autonomy and sovereignty with respect to public health policies – may well be on the list of “horses” Andrew Robb may be prepared to trade.

Those wishing to take action on the TPP before the TPP ministers’ meeting can sign petitions by AFTINET or Choice; AFTINET also has information kits for people who wish to talk to their local MP.

Deborah Gleeson is a public health lecturer at La Trobe University, Convener of the Political Economy of Health Special Interest Group of the Public Health Association of Australia and spokesperson for PHAA on the TPP. She’ll be tweeting from Singapore from @DrDebGleeson.