This article was first published on February 19, 2020

As a major new report warns that the world’s children face a grim future due to the climate emergency and other existential threats, a group of eminent Australians has launched a Safe Climate Declaration, calling for an escalated national response to climate change that “matches the scale of the threat”.

The Declaration emerged from two days of intense discussions at the National Climate Emergency Summit in Melbourne last Friday and Saturday, which had #NCESummit2020 trending nationally on Twitter for the duration.

Journalist Marie McInerney attended the summit for Croakey, with support from our Public Interest Journalism fund.

It was the kind of forum that a Federal Government might be expected to lead.

Current and former politicians from across the political divide came together with experts from many fields and communities.

They were all talking about climate change risks, impacts and – importantly – solutions, laying down the pathways, timelines, overarching strategies and grassroots initiatives needed for an urgent response, globally, nationally, locally.

It was, as one participant put it on Twitter, “a compelling mix of grim detail and inspiring information”, made necessary by the absence of national leadership and the “weaponisation” of climate change by former Prime Minister Tony Abbott that continues to shape politics and policy.

In a panel discussion on the “parlous” state of Australian politics and failures in political leadership, eminent journalist Kerry O’Brien summed it up for many:

The pathetic action on climate change has become the kind of totemic emblem of those failures, and the biggest failure of all, the one that’s going to cost us dearly.”

Here are seven key themes from the discussions.

As the queue to enter Melbourne Town Hall snaked around the city block, delaying the start of the event, Peter Garrett, Ian Dunlop, and leading US climate scientist Professor Michael Mann fronted a news conference to lay out the agenda for change. You can watch it in full here.

Mann, who became known globally for his “hockey stick” chart showing global temperature data over the past thousand years, did not expect to become such a big voice in Australia two years ago when he planned a sabbatical here.

But timing is everything. He arrived in December, to bear witness to unprecedented heat, drought, bushfires and floods, and to see the impacts of climate change “play out in a profound way in Australia”.

At the summit, presenter after presenter talked about the pace and scale of climate change impacts, laid bare by this shocking summer, and urged a “far faster” transition to zero carbon than 2050, some by ten or 20 years.

That’s a huge ask from where we are now, and only underscores what has been squandered in Australia, which became the first nation to put a price on carbon in 2012. This was scrapped by the Abbott Government in 2014 despite its impact in reducing emissions.

Summing up evidence put to it over two days, the summit’s Safe Climate Declaration warns that Australia’s 2019-20 megafires are “a harbinger of life and death on a hotter Earth”, with the impacts of climate disruption around the world more severe than previously projected.

At 1.5°C warming relative to pre-industrial levels, now likely only a decade away, the Great Barrier Reef will be lost, sea levels will be heading for a rise of many metres, and tipping points will be at hand for Greenland, and for the Amazon and other carbon stores.

The current Paris Agreement emission reduction commitments, if implemented, are a path to 3.5°C warming by 2100, possibly earlier. This could increase to 4–5°C when long-term climate-system feedbacks are considered.

National security analysts warn that 3°C may result in “outright social chaos”, and 4°C is considered incompatible with the maintenance of human civilisation.” 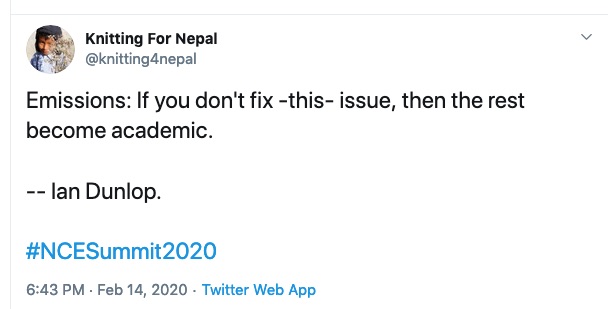 2. Time to go to war on climate change?

A recurring concern was how to rally the nation to the scale and pace of action required.

While there are hopes that Independent MP Zali Steggall’s Climate Act Bill might be a circuit breaker (John Hewson described it as a ‘get out of jail’ free card for Scott Morrison), a number of keynote speakers argued that we need to put Australia onto a ‘war footing’ to mobilise the full resources of the state.

“Climate chaos most resembles war in the scale of threats to humanity,” Peter Garrett said. “The climate emergency dictates the nation must go onto a ‘war’ footing.” (See his full speech)

Likewise, Greens Leader Adam Bandt declared that “the time for appeasement is over”, and announced he would introduce a Climate Emergency Declaration Bill within the next fortnight, mandating a cross-party war cabinet among other measures.

Many Summit participants welcomed or echoed the language as a way of communicating the urgency and threat – and the pointlessness of pursuing any other policy goal if we don’t address this one.

The Australian Medical Association’s Dr Chris Moy saw parallels in our response to the coronavirus (watch this interview with him and AMA colleagues on the “catastrophic” climate change risk to health and see this related story).

But just as the coronavirus response has generated human rights concerns, the militaristic framing of climate action caused some disquiet, particularly when it tipped into conversations (mostly in a ‘hypothetical’ exercise) about “suspending democracy” and what constant states of emergencies might deliver – from wholesale tree clearing to China style one-child family limits.

For Doctors for the Environment member Dr Richard Yin, the framing is “both understandable and concerning”, given that much can be done in the name of an emergency “that then places unrestricted power to a government who can then use it and overrule human rights”.

Fellow DEA member, cardiologist Dr Arnagretta Hunter was also uneasy: “It split the room, in a room of true believers,” she said. The war narrative made sense to her, but she wants to see whole discussion “framed through positive community empowering – transformative change that is highly beneficial on a personal and global level”. 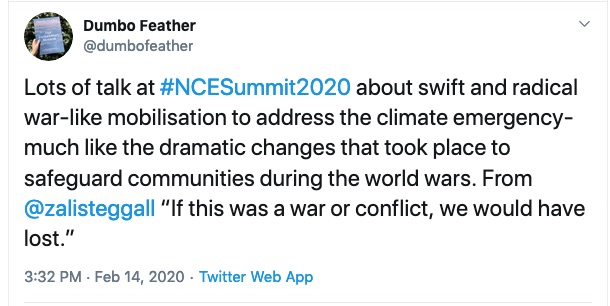 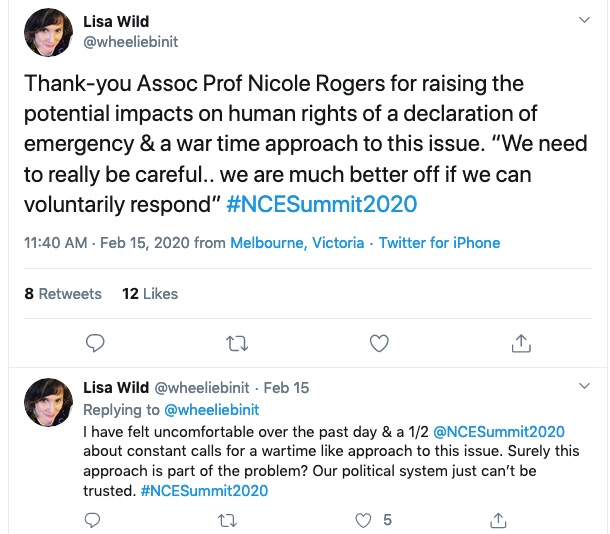 For Carmen Lawrence, one of the strengths of the summit was it didn’t just bring together the “usual suspects”, with the speakers and delegates crossing party lines, sectors, expertise and demographics.

As well as big names from the media and climate policy, the summit also heard from people working across many professions and backgrounds – Indigenous campaigners and academics, farmers, architects, town planners, tour operators, engineers, lawyers and doctors, and from grassroots initiatives, including Hepburn Wind, Australia’s first community-owned wind farm.

And more was happening on its sidelines.

One group of Melbourne students met to develop a campaign for schools to declare Climate Emergencies, while more than 100 local government councillors and officials and the ACT Minister for Climate Change Shane Rattenbury got together and announced at the final session of the summit that they had formed a new network, Climate Emergency Australia. Follow @TrentMcCarthy on Twitter for more news. 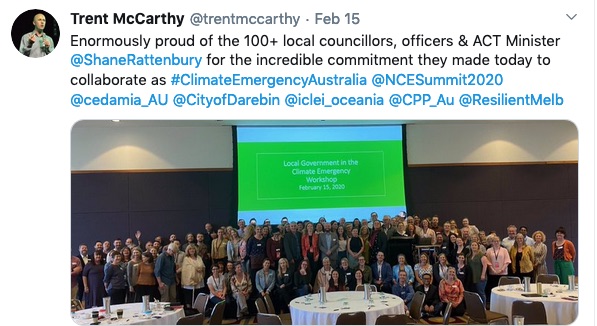 True climate action must also deliver social and cultural change – climate justice, as was made clear by a hard-hitting panel discussing “Crisis On Country”.

Academic Jacqui Katona, a Djok woman who led the fight against the Jabiluka uranium mine at Kakadu, said climate justice cannot happen if “the colonial project is perpetuated” through ongoing injustice for Aboriginal and Torres Strait Islander people, including continuing removal of children from their families and challenges to native title.

“Your society is killing us. Act ethically,” she said, telling advocates they have a responsibility to Indigenous peoples whose connection to Country “has been tokenised by your society”.

That’s been a concern for Indigenous academic and writer Professor Tony Birch during the bushfire crisis, where there’s been a welcome willingness of some in politics, science and the media to tap into Aboriginal expertise.

But he is concerned they have mostly “cherrypicked” fire management skills, rather than the deep connections that Indigenous people have with Country, exemplifying failures in Australia to properly understand Indigenous sovereignty, authority and knowledge, he said.

Highlighting the ongoing fight to protect sacred birthing trees on Djab Wurrung country in Victoria and other cultural struggles, Birch said, for example, that the role and authority of Aboriginal women are often ignored.

See more from the panel at this Twitter thread.

5. Rural MPs need to step up

“I’m from way out west where the rain don’t fall,” said Anika Molesworth as she opened her speech, showing photos of her family farm near Broken Hill, where crippling drought has meant the future she had planned on is literally being blown away in dust storms.

“I’m a food producer and my family farm no longer produces food,” she said, describing ground heat of up to 70C and the last throes of 500-year-old river red gums.

Molesworth, a member of Farmers for Climate Action, acknowledges that agriculture is part of the problem of climate change, contributing significantly to greenhouse gas emissions, but says the sector is also one of the most exposed industries and a key player in the solutions.

She wasn’t alone in her frustration at government inaction and in urging a National Strategy on Climate Change and Agriculture. Others too bemoaned lost opportunities for new industry and innovation in a decarbonising world.

Molesworth says it is time for rural MPs to start representing their constituencies.

“If you are a rural representative who says you stand up for rural Australia, you have to be standing up for climate change (action),” she said in this interview.

So why do many people resist climate action?

There are many possible reasons, according to social researcher Dr Rebecca Huntley, who has written about “how climate change has become a battle of ideologies, values and worldviews”, thanks in many ways to politicians and parts of the media.

That’s also a focus for US activist and clinical psychologist Margaret Klein Salamon, founder of Climate Mobilization, which is working to initiate “a WWII-scale mobilization”.

Watch this interview with Salamon, who gives a shout out to #EndClimateSilence, a campaign that aims to hold media accountable on reporting climate change links to extreme temperature events and other impacts.

Journalists can struggle to draw those links, particularly those at the ABC who are under attack from the right, said The Monthly journalist Paddy Manning (who is writing a book titled “Body Count: how climate change is killing us”.)

He says: “If you sound the alarm on climate change, you’re an ‘activist’.”

Meanwhile, Carmen Lawrence provides some tips in this interview on her research into what can and can’t shift deeply held attitudes on climate change. They include not mentioning climate change first up, exploring people’s identity and values in ways that may lead to connections, and listening to people rather than berating them. 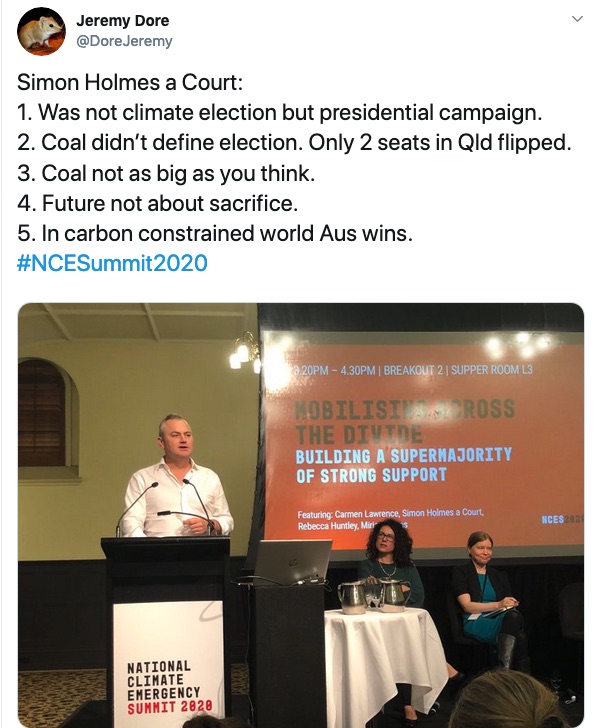 7. Calls to action for Croakey readers

Watch our Croakey News playlist compiling six interviews from the summit (as below). They were originally broadcast live at Periscope, with 6,550 views as at 19 February 2020.

Marie McInerney’s tweets from the summit generated more than 300,500 impressions. 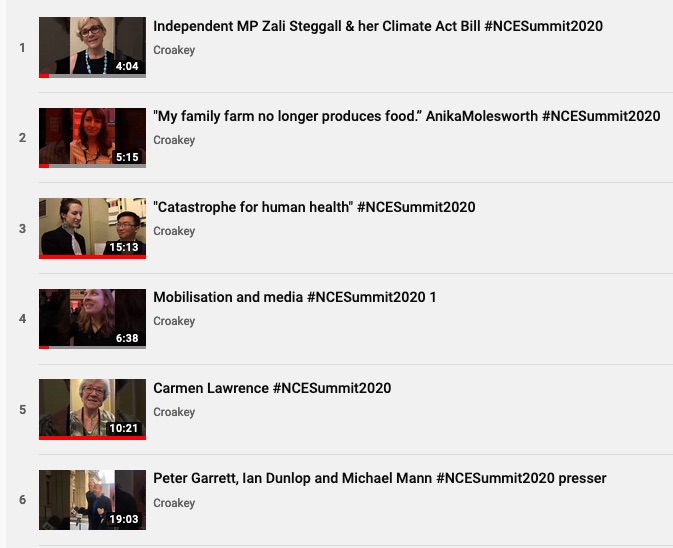 PrevPreviousStaying in, watching birds and punching on. And good-bye 2020
NextPast time to tell the public: “It will probably go pandemic, and we should all prepare now”Next