Seven years on from the Apology and how is the healing going?

Here’s hoping the Canberra political air will clear enough this week from today’s Liberal leadership spill vote to allow a focus on the 7th annual Closing the Gap report from the Prime Minister, which is expected on Wednesday.

This time last year Prime Minister Tony Abbott said there was “probably no aspect of public policy on which there is more unity of purpose and readiness to give others the benefit of the doubt” as there was in the commitment to Closing the Gap targets. He said the Government was “serious about Aboriginal policy – no less serious than it is about stopping the boats, fixing the budget, and building the roads of the 21st century.”

Many would disagree, particularly with ongoing funding uncertainty for services across Australia and with Aboriginal and Torres Strait Islander people at higher risk from damaging policy proposals like the GP copayment. It will be interesting to see whether Abbott’s performance in Indigenous affairs also improves and attracts the scrutiny it deserves as the government, Liberal and National parties, media and the broader nation discuss leadership and policy priorities?

This week provides him an important opportunity to make up for lost time, also marking the 7th anniversary since the National Apology to the Stolen Generations.

The Healing Foundation will commemorate the Apology by hosting an event, Telling Our Stories: Healing Our Stolen Generations, to be broadcast over the web as a live interactive seminar from 10am (AEDT) on Thursday 12 February. See the post below from Healing Foundation CEO Richard Weston for more details on how to be involved. 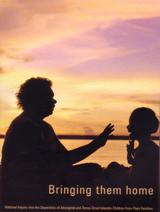 It is nearly 18 years since the Bringing Them Home report was tabled in Federal Parliament and this week we commemorate the 7thanniversary of the national Apology to the Stolen Generations.

The Bringing Them Home report revealed the terrible and debilitating impact that the removal of children from their families had on Aboriginal communities across Australia: broken ties to family, community and country; diminished physical and mental health as a result of psychological, physical and sexual abuse; the loss of language, culture and connection to traditional land; and the loss of parenting skills.

Both the report and the subsequent Apology acknowledged this blight on Australia’s history but the damaging effects endure beyond the actual survivors and continue to haunt the families of those who were stolen, through what is known as intergenerational trauma. As the Inquiry reported:

‘…their removal as children and the abuse they experienced at the hands of the authorities or their delegates have permanently scarred their lives. The harm continues in later generations, affecting their children and grandchildren.’

Unfortunately many of the recommendations in the report have never been implemented.

The Healing Foundation’s work over the last five years has included working with members of the Stolen Generations and their families to fund and support healing programs targeted at communities, families and individuals.It is working with communities to build the evidence and knowledge base for best practice in Indigenous healing.

Our programs, developed and delivered by communities, build leadership and capacity in communities, and support workers to gain the skills and understanding to respond effectively to trauma. We support communities to develop their own forms and methods of healing recognising that the ’one size fits all’ solutions often proposed by governments and non-Indigenous experts are not the answer. This opportunity to make choices and decisions, this self-determination, is a critical part of the healing process.

Healing for the Stolen Generations is a journey and everyone’s journey is different. Collective healing must be included in the mix of responses provided for Stolen Generations members in the form ofsupport groups, group therapy programs, trips on country, healing circles, healing camps and reunions. Collective healing broadens the scope for who does healing and who healing is for. It means moving from a model where expert professionals work with individuals to a model where our people are supported and empowered to develop their own skills and capacities to enable healing in their communities, families and in themselves.

Seven years on from the Apology it is time that government looks critically and seriously at integrating healing into its policy and program responses to addressing Aboriginal and Torres Strait Islander disadvantage and Closing the Gap. Healing offers a fresh approach to an ongoing challenge and presents an opportunity to inject new energy into the Indigenous Affairs landscape that can be led and implemented by Aboriginal and Torres Strait Islander communities themselves.

Remembrance and commemoration, and telling the true story of our history, contribute to the healing process for our communities. To commemorate the Apology anniversary the Healing Foundation is hosting a forum in Canberra this Thursday with prominent members of the Stolen Generations telling their stories and talking about what is working to heal them and their families.

Panel members Aunty Lorraine Peeters, Mark bin Bakar, Florence Onus and Ian Hamm, with MC Richard Frankland,  will talk about their healing journeys which have included helping others to heal and will discuss how Australians can support this momentum either through personal, organisational or government level responses.

The Canberra forum, Telling Our Stories: Healing Our Stolen Generations, will be broadcast over the web as a live interactive seminar. There will be a Question and Answer session where audience and webinar participants can address questions to the panel members.

PrevPreviousA tribute to Tim Moore, and his wide-ranging contributions to community health
Next‘Good government starts today’ What about good health policy? (asks the AMA for all of us)Next