Sexism is bad for your health

On International Women’s Day 2013, Kristine Olaris, CEO of Women’s Health East, reminds us why sexism is bad for everyone and announces a new anti-sexism campaign…..

Far from being a thing of the past, sexism is present in nearly every facet of our lives. Sexism affects us all, both men and women, however women and girls, are particularly vulnerable to the negative impacts of sexism.

How does sexism manifest? It occurs in many different ways, both overt and subtle, and includes demeaning comments, sexual objectification, traditional gender role stereotyping and discrimination. Sexism plays out in all areas of life – social, sport, family, work.

Sometimes gender stereotypes are so entrenched that sexism can go unnoticed or not be consciously recognised by all. Even women can be guilty of sexism against other women. Sexism is intricately and subtly woven into our society and subconsciously internalised into our thinking as individuals.

You do not need to be anti-women to perpetuate sexism (and we have probably all been guilty of this at times), but sexism is inherently detrimental to women.

Sexism is a constant in women’s lives that is experienced with a frequency and regularity that places an ongoing, potentially cumulative and significant burden on women’s health and wellbeing.

Sexism in our society keeps women disempowered, and supports the patriarchal structures and practices that exist, thereby maintaining the status quo. 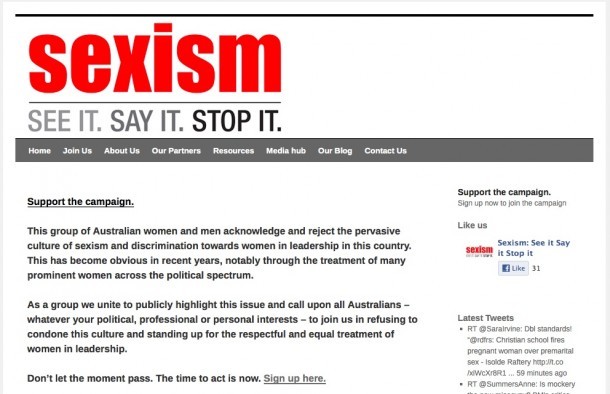 A wealth of examples is shared daily by @EverydaySexism on Twitter. Recent stories include the experience of a woman who, when she recounted being followed in a supermarket to a male friend, was asked: “Surely that’s a compliment?” Ah, no.

Men also experience sexism, but perhaps because it occurs much more rarely, it doesn’t cause as much anxiety nor contribute to disadvantage. Men also don’t experience the same types of sexism that women do such as sexual objectification (just take a look at the 2013 Oscars and host Seth MacFarlane’s commentary if you think this is a thing of the past.). Sexism can however limit men’s roles in society – just ask a man who has unsuccessfully tried to negotiate with their employer for conditions that enable an active parenting role.

For many women, sexism is a daily occurrence. It occurs throughout women’s lifetimes and can have a potentially cumulative, deleterious impact on women over time. This can manifest in issues with body image, and possibly contribute to eating disorders. It can certainly adversely affect women’s mental health through increased likelihood of anxiety, depression and poor self esteem.

It contributes to the economic disadvantages experienced by women, which have associated consequences for health and wellbeing, economic security and career satisfaction.

Sexism and disrespect towards females is one of the major underlying societal causes of violence against women. Sexist attitudes, actions and practices need to be called to account – and we all have a role to play in doing this. The media is no exception. Recent studies in Britain found some newspapers were glamorising violence towards women and girls. Others generally depicted men as active, respected professionals while portraying women as sexual objects. Sexism towards women harms men too, since sexist behaviour by men affects how women view and respond to males more broadly.

Key to the prevention of the harmful outcomes of sexism is the encouragement of respectful attitudes to all women and the promotion of gender equality.

The Gender Equality Blueprint (2010) nominates women’s leadership as one of the five priority areas to be addressed in order to achieve gender equality.

But it’s not just about the poor set of numbers; it’s the treatment of women in leadership positions that is also of concern.

The Australian Prime Minister’s recent ‘misogyny’ speech gave voice to the issue which was an important step. Interestingly the media coverage of this speech in Australia was more focused on the political ramifications of the speech than its content; it wasn’t really until it got coverage in countries like the UK and USA that the Australian media began to talk about the real issues which women in leadership face.

Could this have been because of the appallingly low numbers of women in management positions in the media in Australia?

There are important reasons beyond those of equity to ensure women are better represented in leadership positions. Companies with higher rates of women on their boards perform better and improve their risk profile. Female Senators in the US Congress outperform their colleagues on their ability to raise more funds for constituents and achieve a higher rate of sponsorship for their legislation.

Why else is it important to support and promote women’s leadership? The disparity between men and women in leadership positions in workplaces and in our broader society acts to maintain the status quo in gender roles and stereotypes.

It is difficult to see how we will address gender inequalities and sexist policies and practices until we have equality of gender representation in leadership.

The success of the ‘Destroy the Joint’ social media campaign (so named after Alan Jones’s comments that that’s what women in Australia are doing), demonstrates that many women, and men are recognising the destructive nature of sexism and are willing to stand up and say so.

As a society, we need change the public discourse about sexism, so that we all have a better understanding of sexism and its insidious impacts on our lives, so we recognise it when we see it and we feel confident to call people on it.

We need to do this so that we can work towards a future where all people have equality of opportunity and where gender does not determine opportunity and access to power. Where sexism goes unchallenged, it is effectively condoned. Research shows that confronting and highlighting sexist attitudes can help change behaviour.

A new campaign being launched this Friday on International Women’s Day seeks to address sexism by asking all Australians to call out sexism where they see it occurring. By naming the issue, we can highlight where and when it occurs, and in doing so, help to reduce it – even stamp it out.

Sign up to lend your voice to Sexism: See it, Say it, Stop it at www.seeitsayitstopit.com.

Australians will all be better off if you do.

Declaration: The moderator of Croakey, Melissa Sweet, is one of the founding members of the campaign.