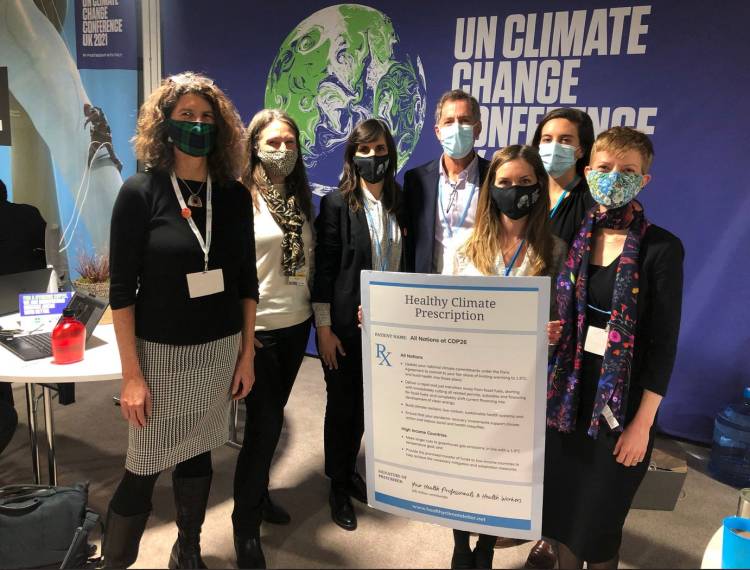 The Global Climate and Health Alliance team in Glasgow. Image via Twitter

Shameful. Reprehensible. Also, some reasons for hope. Analysis from COP26

Introduction by Croakey: The Glasgow Climate Pact has made only incremental progress on addressing the climate crisis when “what was required was a great bound forward by governments”, according to the Global Climate and Health Alliance.

In a statement released at the conclusion of the COP26 meeting in Glasgow, Executive Director Dr Jeni Miller said governments must now push “far beyond” what is asked of them in the pact in order to protect human health.

Miller said governments must deliver on their commitments to limit warming to 1.5C, and on the climate finance that redresses the outsized benefits wealthy countries have enjoyed from their high carbon economies.

“They must also act upon and enforce the protection of human rights, the right to health, Indigenous rights and intergenerational equity, which are clearly stated in the final text of COP26,” she said.

Miller said it was “shameful” that COP26 backed away from calls to phase out coal and end fossil fuel subsidies, noting that last-minute interventions by India, South Africa, Iran and Nigeria lead to the adoption of language about a coal “phase down”, rather than a “coal phase out”.

“It is notable – and reprehensible that even this weak language indicates progress, as it is the first time the need to phase out fossil fuels has ever been mentioned in a UNFCCC [United Nations Framework Convention on Climate Change] agreement.”

Miller said COP27, which will be hosted by Egypt on behalf of the Africa region, must address the failure of wealthy countries to compensate low income countries for the health and other climate impacts they are already struggling with.

Further analysis of the Glasgow Climate Pact follows below – by Dr Robert Hales and Professor Brendan Mackey, from the Centre for Sustainable Enterprise at Griffith University.

Their article, ‘The ultimate guide to why the COP26 summit ended in failure and disappointment (despite a few bright spots)’, was first published at The Conversation. Beneath it is a selection of tweets compiled by Croakey on the COP26 outcomes.

After two hard-fought weeks of negotiations, the Glasgow climate change summit is, at last, over. All 197 participating countries adopted the so-called Glasgow Climate Pact, despite an 11th hour intervention by India in which the final agreement was watered down from “phasing out” coal to “phasing down”.

In an emotional final speech, COP26 president Alok Sharma apologised for this last-minute change. His apology goes to the heart of the goals of COP26 in Glasgow: the hope it would deliver outcomes matching the urgent “code red” action needed to achieve the Paris Agreement target.

At the summit’s outset, UN Secretary-General António Guterres urged countries to “keep the goal of 1.5℃ alive”, to accelerate the decarbonisation of the global economy, and to phase out coal.

If we evaluate this using the summits original stated goals, the answer is yes, it fell short. Two big ticket items weren’t realised: renewing targets for 2030 that align with limiting warming to 1.5℃, and an agreement on accelerating the phase-out of coal.

But among the failures, there were important decisions and notable bright spots. So let’s take a look at the summit’s defining issues. 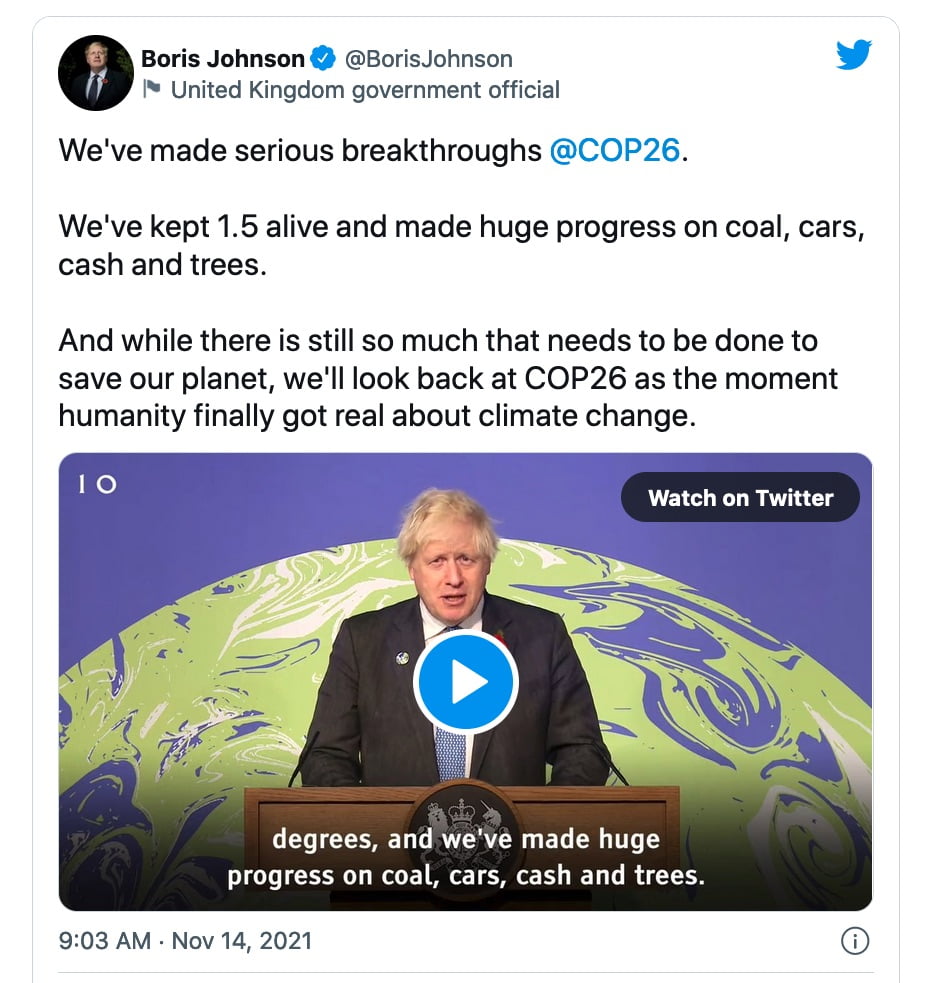 The goal of the Paris Agreement is to limit global temperature rise to well below 2℃ this century, and to pursue efforts to limit warming to 1.5℃. Catastrophic impacts will be unleashed beyond this point, such as sea level rise and more intense and frequent natural disasters.

But new projections from Climate Action Tracker show even if all COP26 pledges are met, the planet is on track to warm by 2.1℃ – or 2.4℃ if only 2030 targets are met.

Despite the Australian Government’s recent climate announcements, this nation’s 2030 target remains the same as in 2015. If all countries adopted such meagre near-term targets, global temperature rise would be on track for up to 3℃.

Technically, the 1.5℃ limit is still within reach because, under the Glasgow pact, countries are asked to update their 2030 targets in a year’s time. However, as Sharma said, “the pulse of 1.5 is weak”.

And as Australia’s experience shows, domestic politics rather than international pressure is often the force driving climate policy. So there are no guarantees Australia or other nations will deliver greater ambition in 2022.

Phase down, not out

India’s intervention to change the final wording to “phase down” coal rather than “phase out” dampens the urgency to shift away from coal.

India is the world’s third-largest emitter of greenhouse gases, after China and the United States. The country relies heavily on coal, and coal-powered generation is expected to grow by 4.6% each year to 2024. India was the most prominent objector to the “phase out” wording, but also had support from China.

Read more: COP26 leaves too many loopholes for the fossil fuel industry. Here are 5 of them

And US climate envoy John Kerry argued that carbon capture and storage technology could be developed further, to trap emissions at the source and store them underground.

Carbon capture and storage is a controversial proposition for climate action. It is not proven at scale, and we don’t yet know if captured emissions stored underground will eventually return to the atmosphere. And around the world, relatively few large-scale underground storage locations exist.

And it’s hard to see this expensive technology ever being cost-competitive with cheap renewable energy.

In a crucial outcome, COP26 also finalised rules for global carbon trading, known as Article 6 under the Paris Agreement. However under the rules, the fossil fuel industry will be allowed to “offset” its carbon emissions and carry on polluting. Combined with the “phasing down” change, this will see fossil fuel emissions continue.

It wasn’t all bad

Despite the shortcomings, COP26 led to a number of important positive outcomes.

The world has taken an unambiguous turn away from fossil fuel as a source of energy. And the 1.5℃ global warming target has taken centre stage, with the recognition that reaching this target will require rapid, deep and sustained emissions reductions of 45% by 2030, relative to 2010 levels.

What’s more, the pact emphasises the importance to mitigation of nature and ecosystems, including protecting forests and biodiversity. This comes on top of a side deal struck by Australia and 123 other countries promising to end deforestation by 2030.

The pact also urges countries to fully deliver on an outstanding promise to deliver US$100 billion per year for five years to developing countries vulnerable to climate damage. It also emphasises the importance of transparency in implementing the pledges.

Nations are also invited to revisit and strengthen the 2030 targets as necessary to align with the Paris Agreement temperature goal by the end of 2022. In support of this, it was agreed to hold a high-level ministerial roundtable meeting each year focused on raising ambition out to 2030.

The US and China climate agreement is also cause for cautious optimism.

Despite the world not being on track for the 1.5℃ goal, momentum is headed in the right direction. And the mere fact that a reduction in coal use was directly addressed in the final text signals change may be possible. But whether it comes in the small window we have left to stop catastrophic climate change remains to be seen.

Brendan Mackey has previously received research grants from the Federal government, stage governments and charitable trusts that have focussed on problems related to climate change, forests, mitigation and ecosystem services including biodiversity conservation. He is a coordinating lead author in IPCC 6th Assessment Report Working Group II, and he is a voluntary board member of the Great Eastern Ranges Initiative Inc, and a member of the Queensland Government’s Native Timber Advisory Panel.

Robert Hales does not work for, consult, own shares in or receive funding from any company or organisation that would benefit from this article, and has disclosed no relevant affiliations beyond their academic appointment.

A selection of responses to the COP26 outcomes… 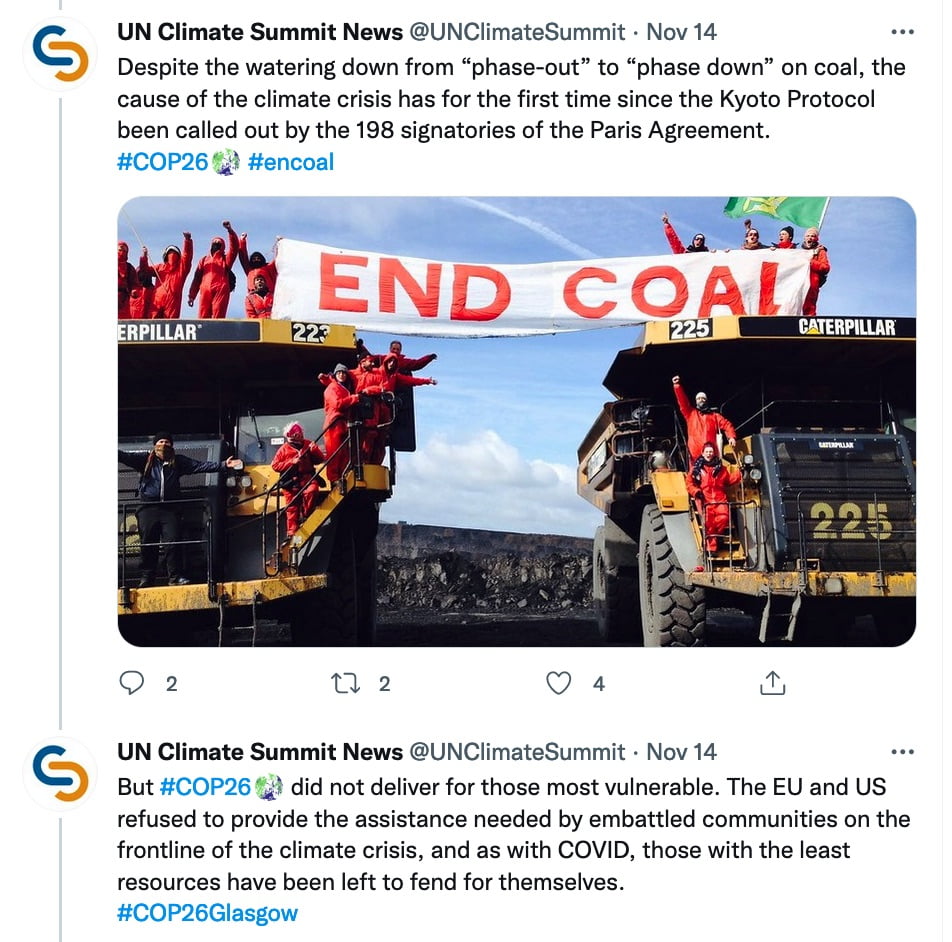 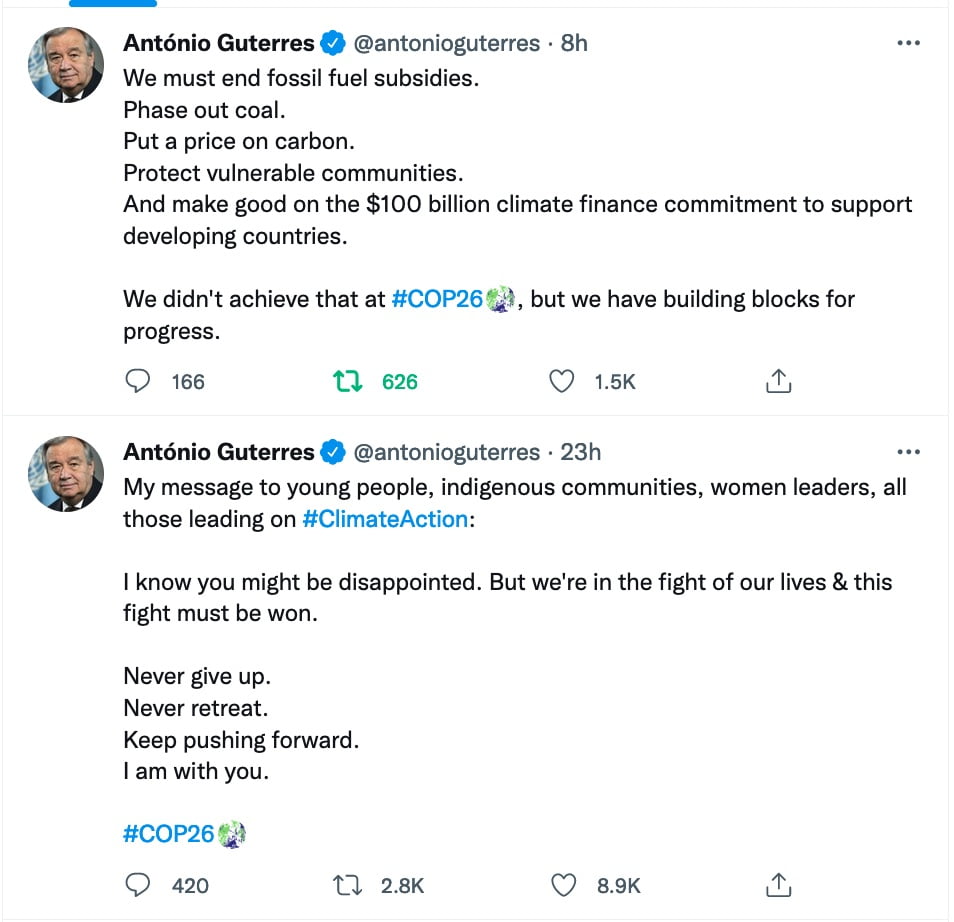 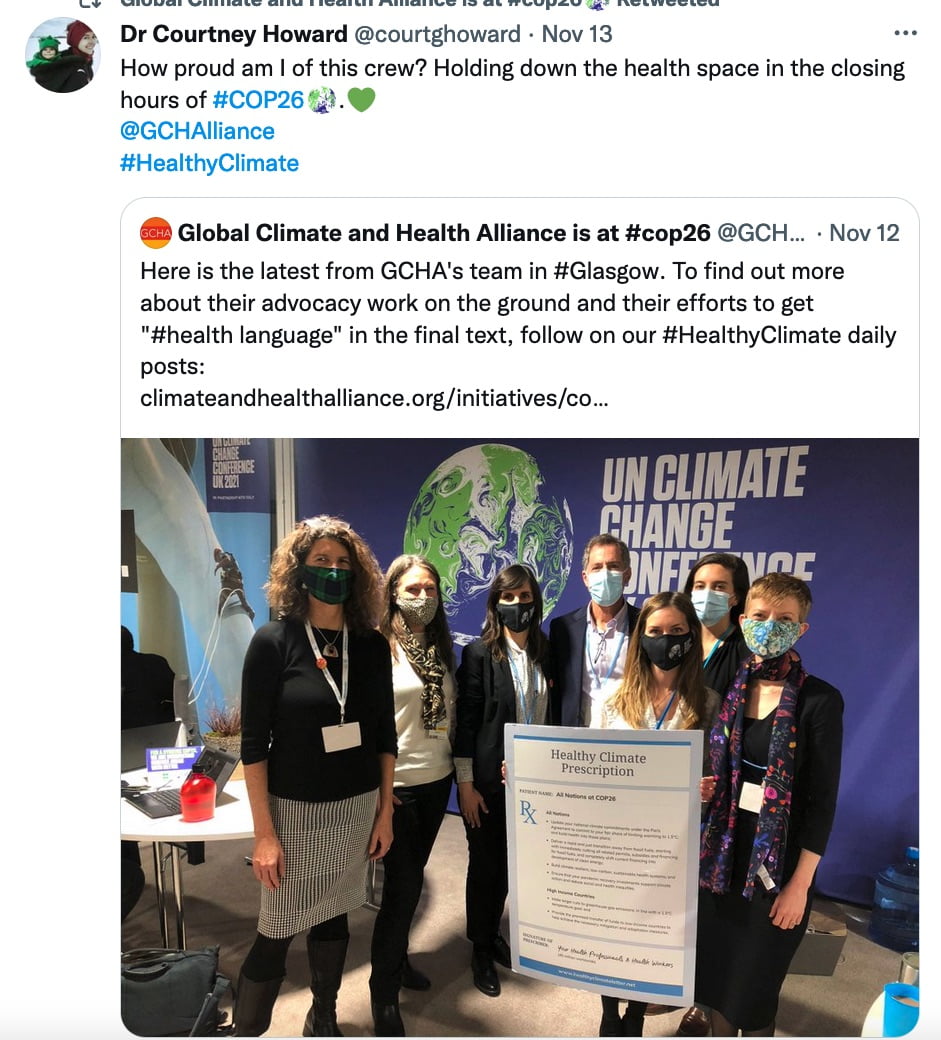 Howard Catton is CEO of the International Council of Nurses, Geneva.

Read the thread on climate disinformation and greenwashing 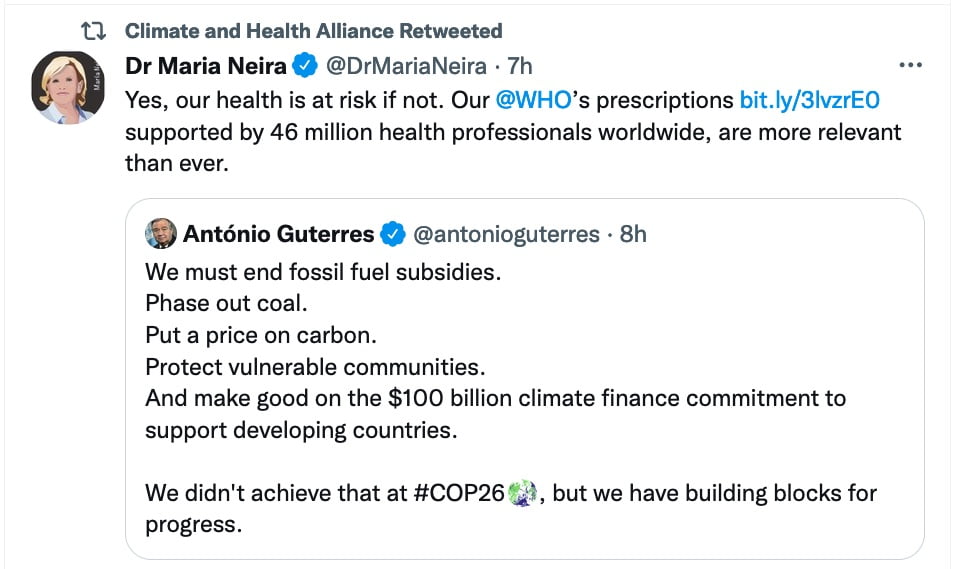 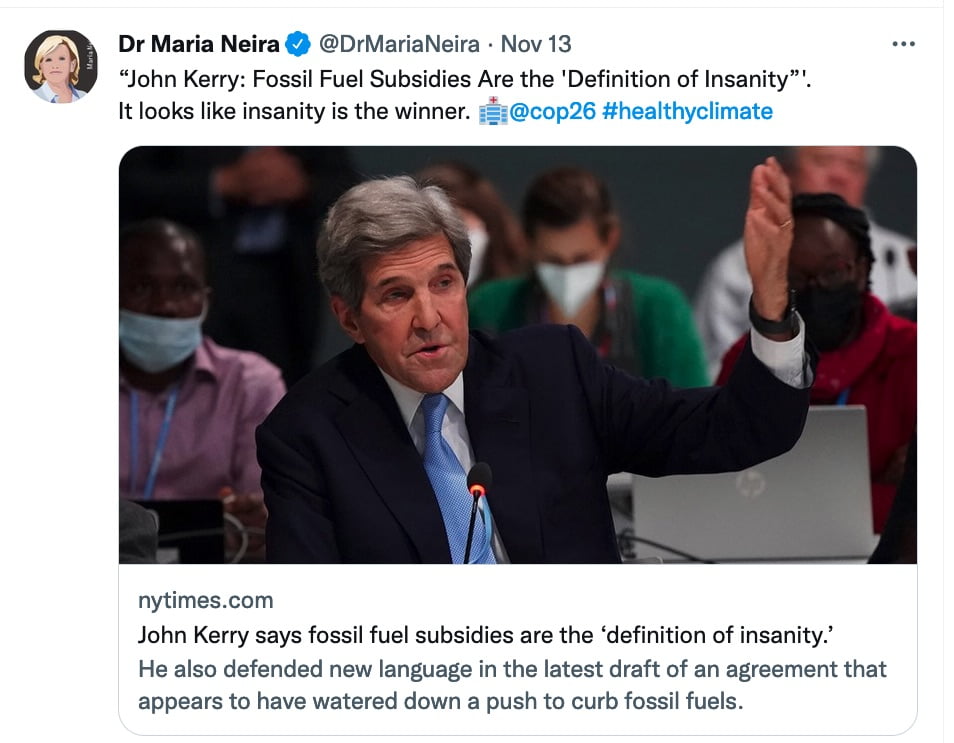 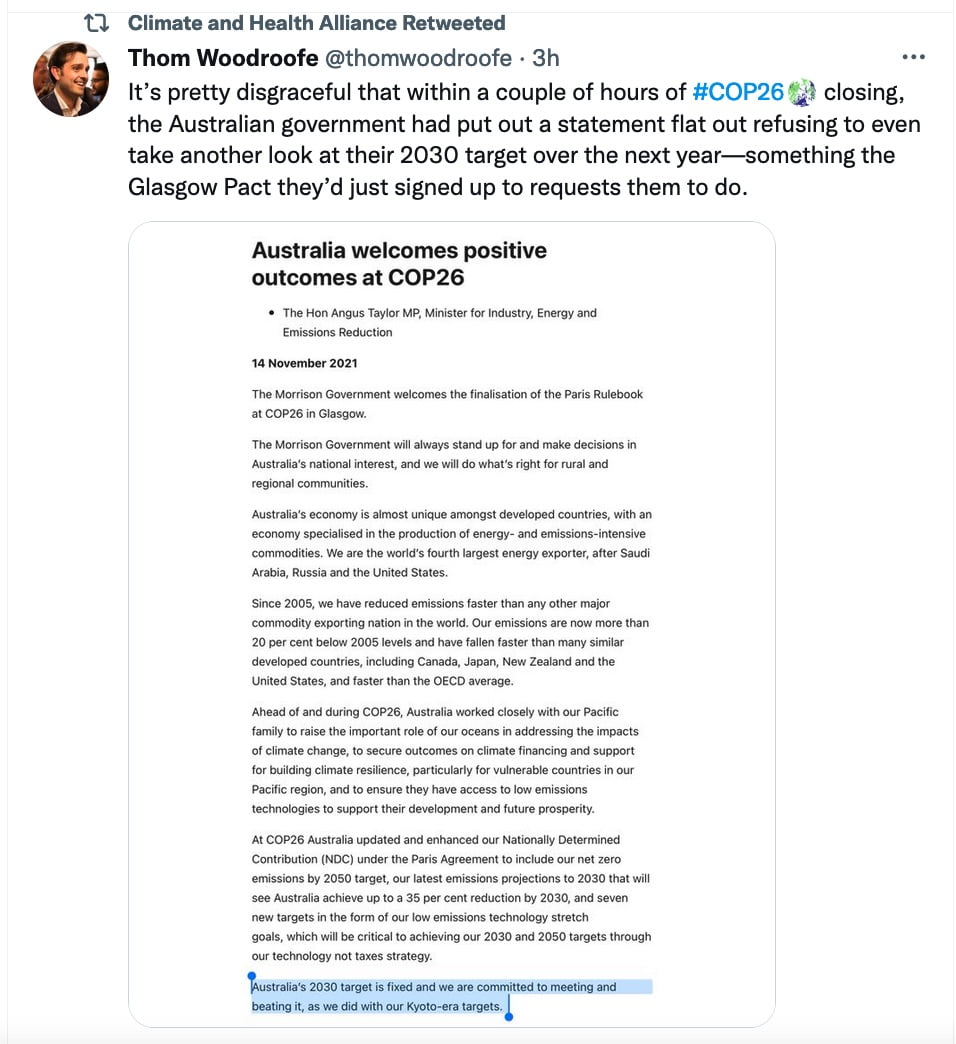 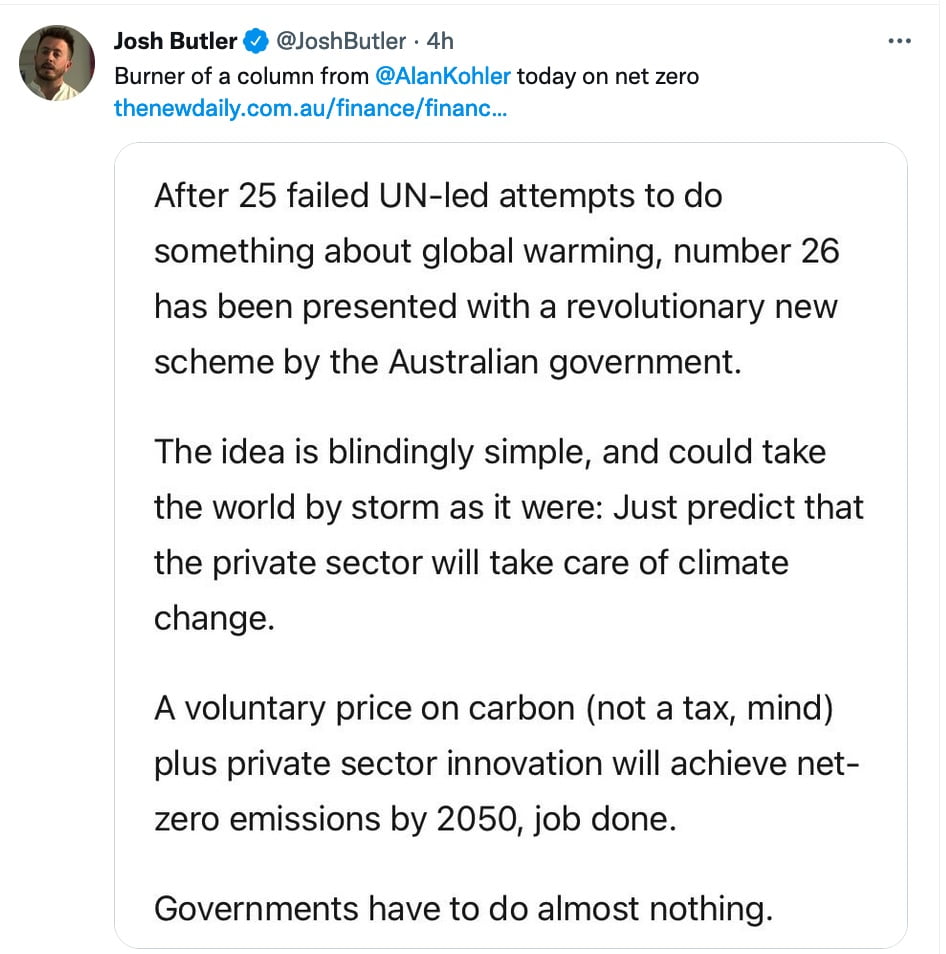 The New Daily: Alan Kohler: We must not let Scott Morrison get away with do-nothing climate plan

PrevPreviousGrab a cuppa, and take in some of the National Nursing Forum highlights – plus bonus cute dog snaps
NextWhen inappropriate housing becomes a mental health threat: stories from Berlin and beyondNext