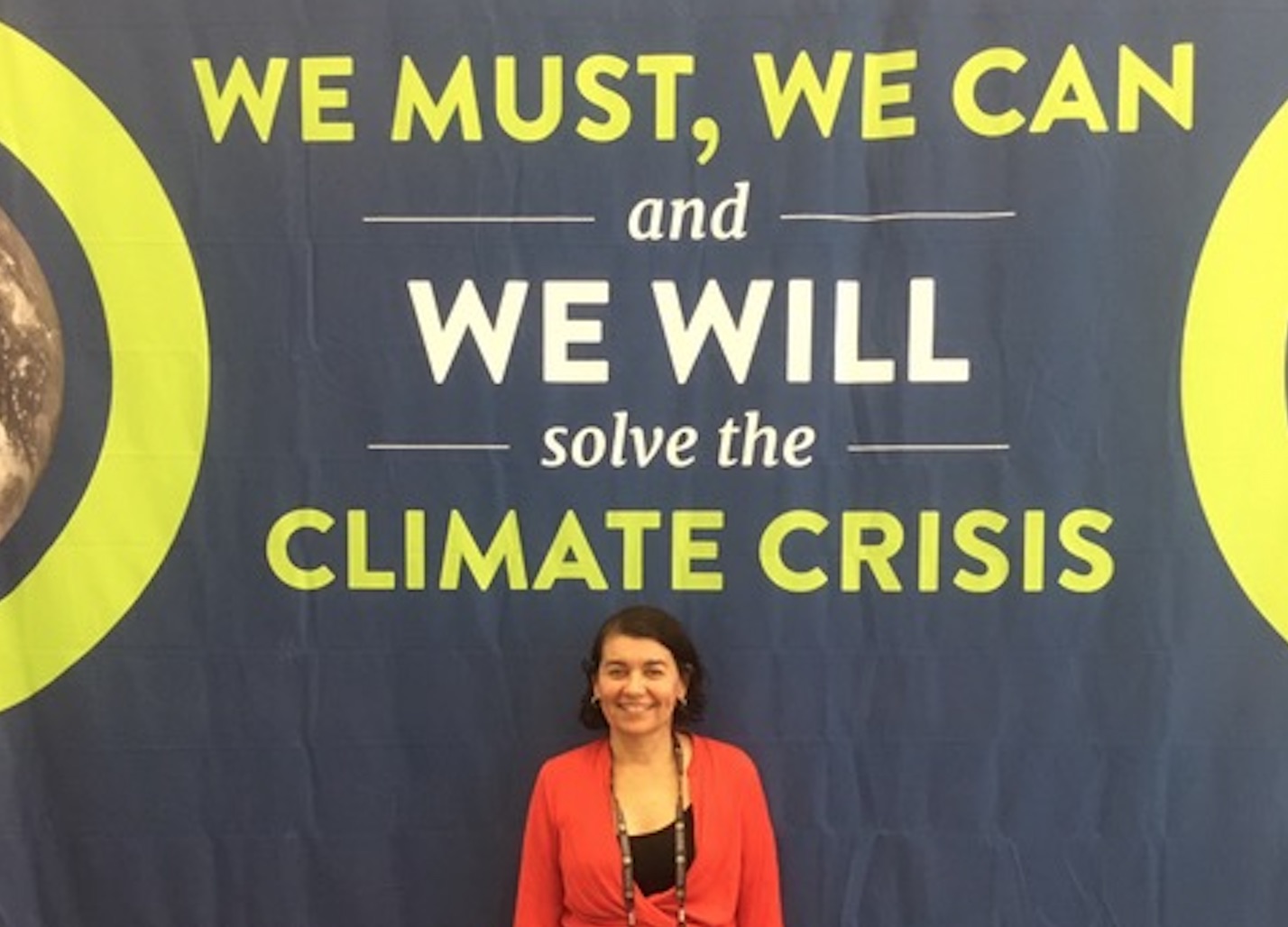 The author at Climate Reality training

Gabi Martinez, a health promotion professional from the Illawarra in NSW, undertook climate action training with Al Gore in Brisbane last month, and left with a new sense of hope and purpose.

In the article below, she encourages Croakey readers to make time for climate conversations and activism “as it is essential for our health”.

As I drive past Appin coalmine, alone in my car on my 47 km commute to work, I reflect on Al Gore’s words at the recent Climate Reality training: “We don’t have the luxury to be discouraged.”

It is easy to be discouraged, I think as I overtake coal trucks on the way home from work and dream of being able to do my daily commute by rail. There is  a train station opposite my office but the trains do not travel to South Coast. It would take me nearly three hours to get home by train.

In my hometown, Wollongong, there is not enough  investment in public transport and little signs of an emerging renewable energy. Coal continues to dominate.

There seems to be no action to stem climate disruption. The problem is so overwhelming it can seem all too hard and depressing. It seems we are on a road to destruction and our elected leaders through their ignorance are fast-tracking us into a world of beyond 40-degree days and water shortages.

Despondency is easy. It means doing nothing. Accepting the status quo. Believing we are powerless to change.

I was one of 750 people in attendance. His two and half hour presentation was described by one of the health professionals on my table as an emotional roller coaster. 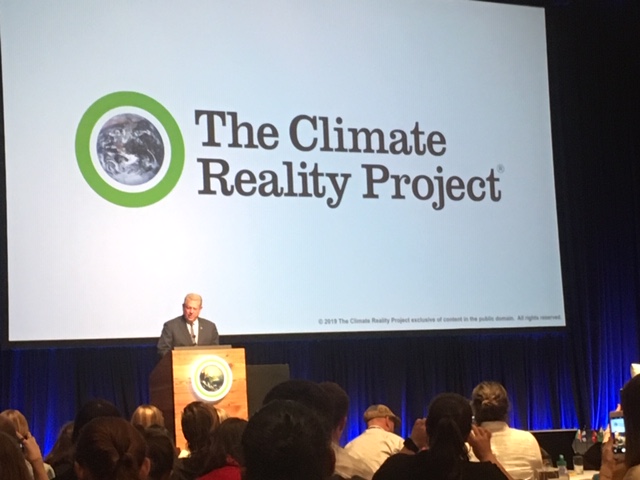 Gore started by describing the effects of global heating on the planet. The increasing flooding, the rain bombs, the hurricanes, the exodus from Syria and Central America due to drought. The acidification of the ocean, the melting permafrost and the release of methane. The increasing risks of heat and fire.

He mentioned the bushfires at Winmalee in the Blue Mountains in NSW as an example. My nephew was in the lockdown at Winmalee High during those fires. I saw the destruction those fires left behind.

One of the GPs on my table was working there at the time and confirmed the trauma it caused in the community.

Gore went through the health impacts of climate disruption; the fact that a baby born in Warsaw today will inhale the equivalent of 1,000 cigarettes per year in their first year of life from smog and other air pollutants.

He described the increased incidence of cholera with hotter weather and the inequitable impacts on poor and vulnerable populations.

He ended his speech with good news and hope for the future: the growing investment in renewables, the rise of solar that has exceeded the highest projections and the rise of the electric car. The will to act is a renewable resource, he reminded us.

Listening to the panellists and speaking with participants over three days in Brisbane made me realise that people are mobilising and there is reason to be optimistic.

Things can change but we need to believe that we have the power to make it happen. We need to hold on to our hope and optimism.  Four degrees of global heating is not inevitable.

I was inspired by Ken Berlin, global environmental lawyer, President and CEO of Climate Reality. He explained the Paris Agreements, what countries need to do and the ambitious Green New Deal. He called out the petro-dictators for undermining democracy.

A surprising fact I learned in Brisbane is that more coal mines have closed under Trump than the Obama administration.

In the US there are now nearly five times as many jobs in solar as in coal mining. Despite my disappointment with the federal election result – coal is on the way out regardless of who is in power. It is an inevitable decline based on economics.

This led me to reflect on the Stop Adani campaign and strategies.

Perhaps it time to transfer some of the resources spent on stopping one coal mine to advocating to build momentum for the creation of thousands of new jobs in renewables. Coal is not only dangerous – it is expensive. It’s time we developed an Australian Green New Deal.

Coal is part of my childhood. I remember my dad covered in coal dust on his return home from work driving a coal truck. I remember our trips from the coalmine to the port in the truck in school holidays.

Coal is part of my history and still a part of the Illawarra where I live.

My hairdresser’s husband is a coal train driver; a dad at my daughter’s school is a coal miner. My neighbour works at the steelworks. How do I talk about transitioning out of coal to the people in my community whose livelihoods depends on it?

I think of the young people I met and the book club they have started since the Brisbane training. The first book on the list is the Uninhabitable Earth by David Wallace. I found the book frightening but a wakeup call on the urgency of the climate crisis.

I was thrilled when I was presented with my green badge at the completion of the training. I feel privileged to be part of a global community of 17,000 people connected by a shared commitment to climate action.

The training has inspired me to act. I have taken my super out of First State Super, which still invests in fossil fuels and joined a fossil free fund.

I am starting a Parents 4 Climate Action group in Wollongong – part of a national organisation. I now listen to Climatic podcasts on my commute for inspiration after meeting Mark Spencer from Melbourne.

Climate disruption is a health issue. As a health promotion professional, I know facts don’t always change people’s behaviours. Stories and conversations with friends and neighbours can.

In 2019 we need to make time for climate conversations and activism as it is essential for our health. 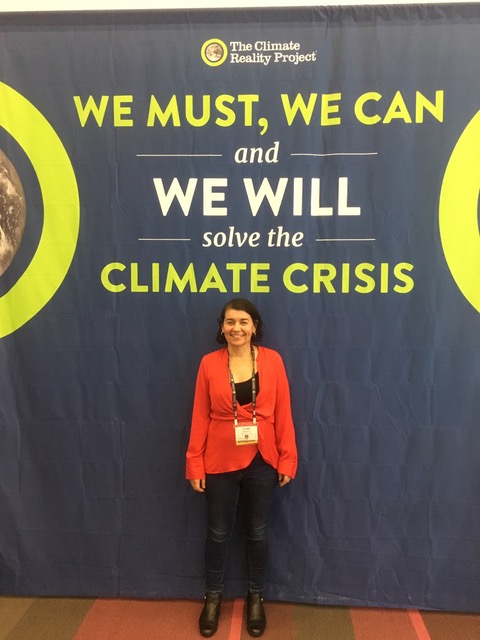