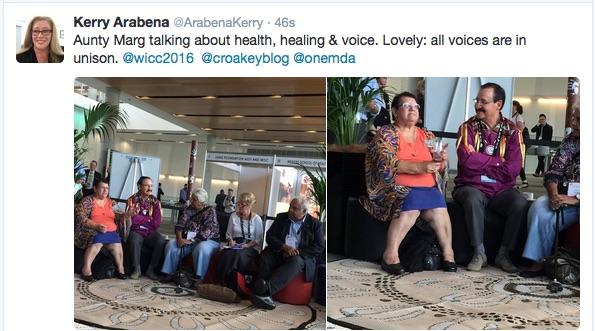 Some of the strongest and most powerful experiences and learning opportunities at the recent World Indigenous Cancer Conference in Brisbane took place in the conference’s Yarning Circle.

You couldn’t miss it. The Yarning Circle was marked out in the main conference space by striking Aboriginal and Torres Strait Islander artwork and floor rugs, providing a safe and welcoming space on Jagara country for Indigenous Elders and delegates at this inaugural international event. 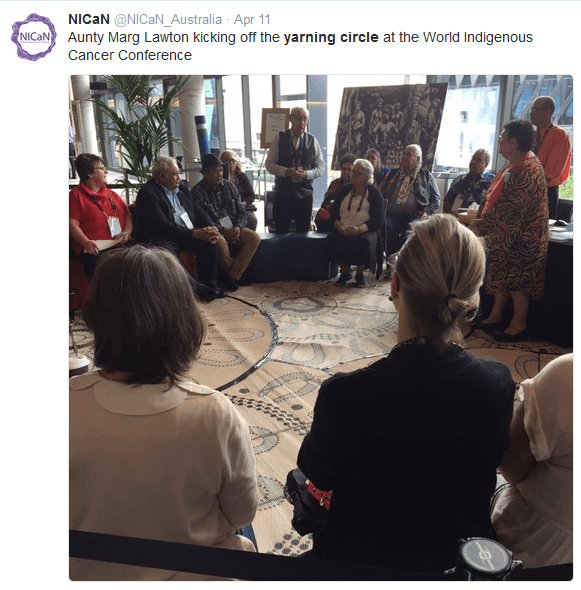 Each day, Elders like Reg and Rose Crowshore and Jerome Yellowdirt, First Nations people from Canada, would arrive early and take their places on the seats around the circle, alongside Aboriginal cancer ambassadors Aunty Marg Lawton and Uncle Bill Buchanan, and many others representing Maoris, Native Americans, and Canadian First Nation, Inuit and Metis people.

They came to share stories and knowledge alongside the wider conference program. Like the conference sessions, there were presentations on prevention, cancer screening, and support for patients.

But it was the Yarning Up open forums that had everyone talking, in and outside the Yarning Circle.

Often there were sobs, other times screams of laughter, every now and again a powerful song could be heard in the session rooms across the other side of the hall.

For many it was the highlight of the conference.

One delegate stood up towards the end to say how “very privileged” he had been to be able to sit in on the circle, and hear stories from Elders from across the world.

He said that being in the Yarning Circle had probably had more of an impact, more of a benefit for him in his work than in hearing the more scientific or academic presentations in the conference program. “It’s been an absolute blessing,” he said. “I really do appreciate it.”

Yarning circles are common in many First Nations gatherings and communities, and are becoming now a feature of major Indigenous conferences.

As conference organiser Associate Professor Gail Garvey from the Menzies School of Health Research said, Yarning Circles provide a safe place for Indigenous people to share stories around strength, resilience and hope – and shouldn’t just be confined to Indigenous conferences.

Susan Forrester from VACCHO credits the International Indigenous Working Group on HIV & AIDS as pioneering them at conferences. She was involved with the creation of a First Peoples Networking Zone in 2014 at the World AIDS conference in Melbourne.

“Community people were finding there wasn’t really a place for them to have a voice (at conferences),” she said.

“As we know with conferences, we need the data, the clinical side, the academic side, but pushing for a place for community is really important.” It needs to be grounded in local culture, she said. 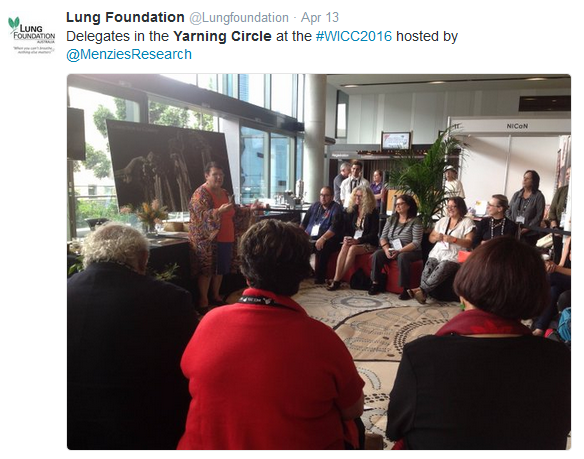 According to publications by Aboriginal researcher Dawn Bessarab, Indigenous people across Australia refer to and use ‘yarning’ in the telling and sharing of stories. It’s an oral tradition also well known and respected in other Indigenous nations.

Bessarab provides a case study in a seminal researchers’ guide produced by the Lowitja Institute which talks about how yarning could be applied as a rigorous research method and describes the different types of yarning that took place in a project she was involved in:

Dr Angeline Letendre, Lead Scientist of the Community Research Stream at the Alberta Cancer Prevention Legacy Fund in Canada also spoke to the role of story-telling in indigenous communities: if something is repeated enough, it goes beyond anecdote and information, she told the conference.

“Our stories are not just narrative, they’re evidence,” she said.

Here are some other thoughts from delegates about the #WICC2016 Yarning Circle, or what they wanted to share there, and some pix and tweets below.

Jerome Yellowdirt, from the Alberta First Nations Information Governance Centre, told the final session it had been “an honour and pleasure” to be among the Elders in the Yarning Circle.

He talked about his journey with colon cancer, of finding the right treatment through a balance of traditional and “newcomer” ways. “There’s a lot of concern in our homelands about this deadly disease but a lot of ways we can deal with it, live with it,” he said.

Just as pressing, he said, was the suffering their grandchildren were experiencing as they struggled to resist alcohol and drugs. “They’re the ones hurting right now, they’re hurting big time,” he said.

Amanda Paterson, an Indigenous Health Project Officer, was blown away by a session run by the Canadian First Nations elders.

” They did a ceremony to cleanse you of all pain and suffering, to make you more comfortable to talk about things, and to accept the information that was being received. They talked about how they use both types of medicine, traditional and Western, and how that’s worked for them, then we talked about other people’s experiences of cancer and how they’ve dealt with the process. For some, death came really quick, others have been on long, often ongoing healing processes.”

“I have to say this is probably the best part of the conference, talking about individual people and their experiences. I think that has had such a big effect on people (attending) and the way they see their roles going forward. ”

It had changed her thinking on how to increase cancer screening rates for Aboriginal people in her community.

“At first I thought we’d do a big health promotion, now I’m thinking we do yarning circles with community people. Even if there’s only 10-15 people, the flow on effect will be amazing. Hearing from another person what they could have done to prevent cancer I think will have more of an effect than having a poster on a wall.”

Aunty Robin Payne is an Aboriginal woman from Dubbo and a cancer survivor who is on the road to recovery after a difficult pathway.

Her big concern is how reluctant many Aboriginal women are to have a mammogram – “it’s because of the white doctors, stems back to the Stolen Generations, a lot are frightened,” she said.

Growing up as one of the few Aboriginal families in a regional town, she says she doesn’t share that concern about interacting with mainstream medicine, but it’s left its mark nonetheless.

“I was reared up in a white town. We just played like the white kids, though she got called names, of course, like ‘Vegemite’ and ‘Gravox’. And the teachers didn’t want to teach you, so they put us at the back of the room with our hands on our head…”

Being part of the Yarning Circle had been enlightening, she said. “It’s bringing us closer together, all having our say, telling our stories. 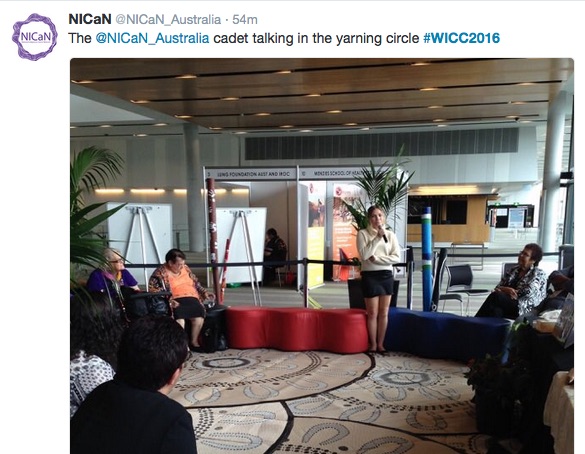 Yarning Circle MC Brian Arley, from the Menzies School of Health Research, was thrilled to have Apunipima Cape York Health Council CEO Mark Wenitong tell the conference dinner he had learnt more about the lived experience of cancer in the Yarning Circle than through his academic learning.

“It was terrific, it actually worked out better than we expected in that it really was a Yarning Circle, it was a welcoming space, a culturally safe space for Aboriginal and Torres Strait islander people and First Peoples from overseas to share their stories,” Arley said. “That’s the strength and beauty of it.”

For him the most powerful moment was the day before the conference began, when Elders from across the world came together for a cup for tea: “I thought this is it, this is why we’re here.”

For Susan Forrester from VACCHO, a powerful moment came when a health promotion officer from a large organisation presented to the Yarning Circle on a selection of health promotion resources and ideas to target Indigenous people in screening.

It was a very welcome initiative, she said, but then a question came up. “It was a beautiful and very important question, and I think a question that wouldn’t come up in the conference: ‘Do you have anyone who is Aboriginal and Torres Strait Islander working with you?'”

“The answer was ‘no’. And then this flood of support came to this young person: ‘If you walk beside us, if you have Aboriginal people working with you, we’ll all be able to close the gap together; if you need support higher up within the organisation, we Elders will support you’.

“The Yarning Circle is where the real business is done,” she said.

Watch this interview to hear more about the Yarning Circle. 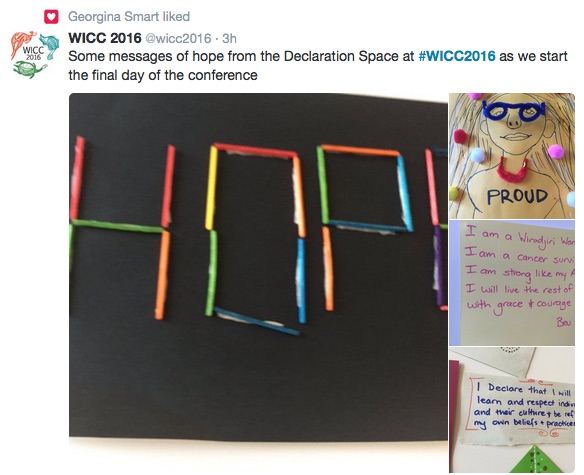 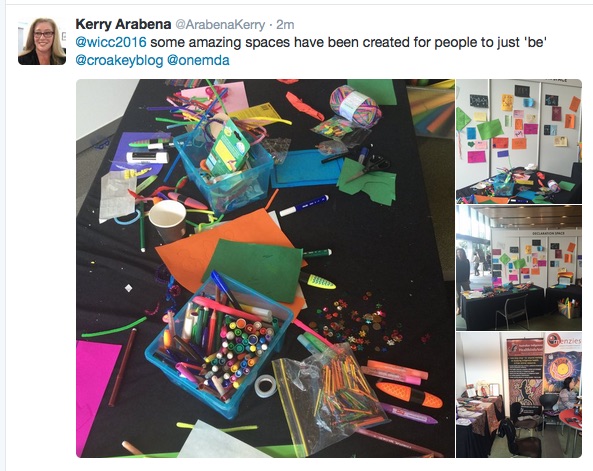 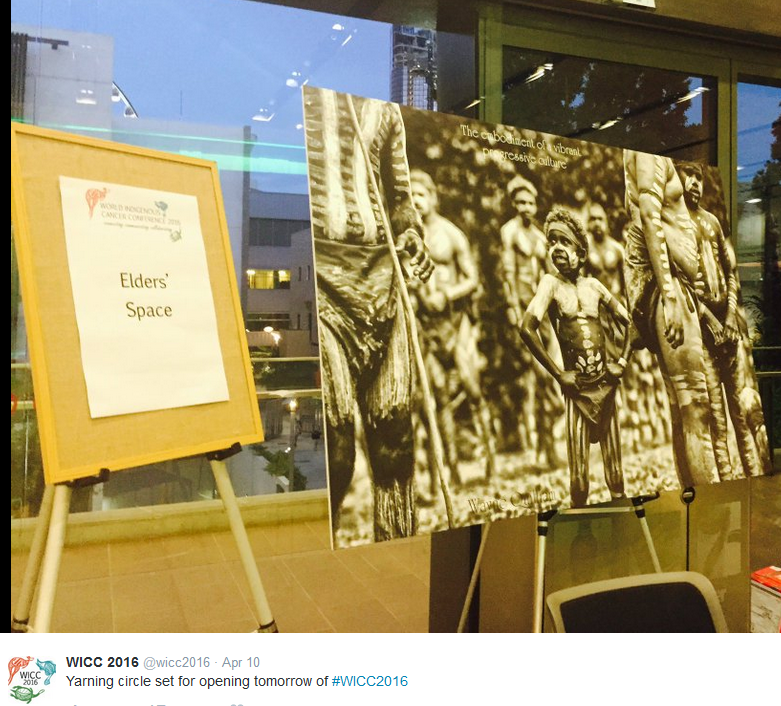 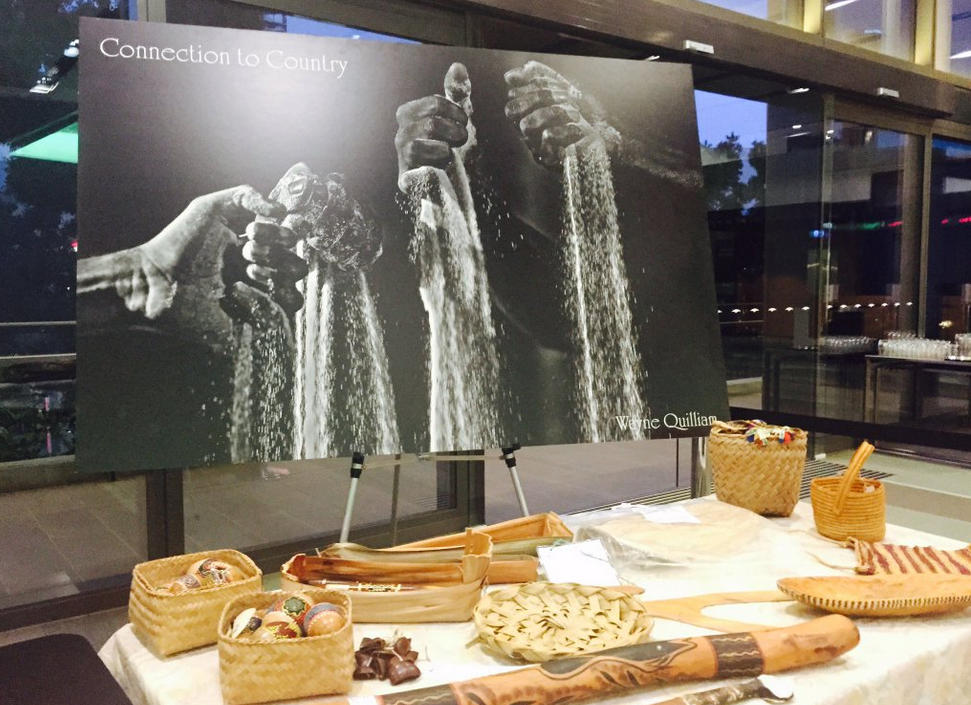