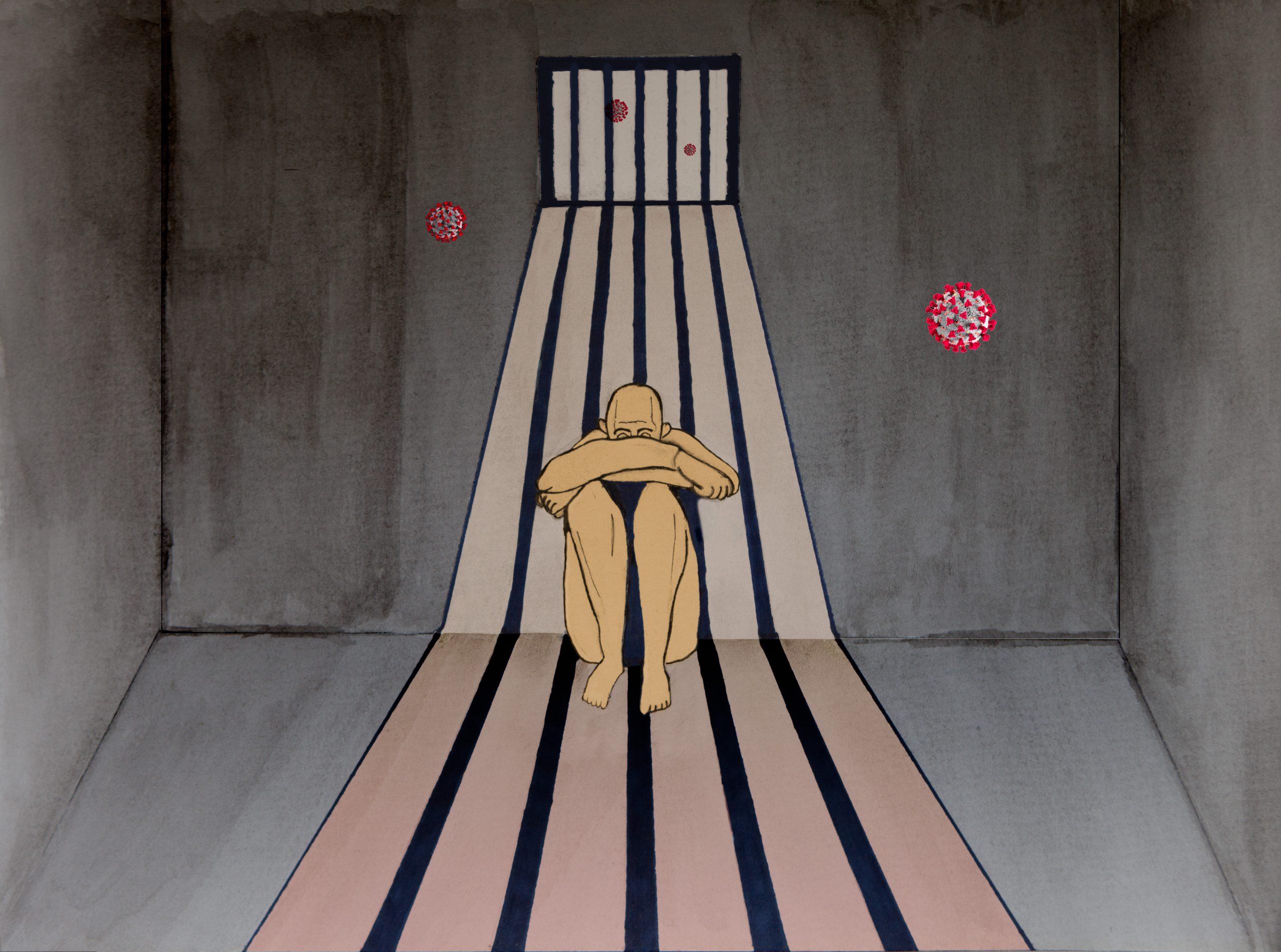 “Are we all in this together?” by Dr Tess Ryan. Ink sketch, watercolour, with graphic digital elements.

Shining a light on the health rights of prisoners

In investigating the concerns confronting prisoners during the pandemic, Dr Tess Ryan, an Aboriginal woman of Biripai country, has created the artwork above, “Are we all in this together?”.

Below, she introduces her artwork, as well as providing an overview of the wide-ranging ways COVID-19 is affecting prisoners’ health.

The work conveys the desolate loneliness felt by prisoners, naked in their vulnerable being, crouching and enclosed in wall to wall concrete.

They are not only powerless to the state, removed from society, but they are facing the hidden threat of possible infection, invisible and seeping into the boxes they find themselves in.

Prisoners are vulnerable to a system that has no effective process to mitigate the genuine possibility of contracting COVID-19. Already dealing with a lack of access to the outside world, they have lost connection to families, to support, to hope.

The vulnerability of prisoners is further increased with this pandemic when those inside have chronic health conditions and are captive to a society that appears to have forgotten and excluded them.

The global COVID-19 pandemic is bringing to light how we view equity and transparency within our systems of government.

The prisons give a unique snapshot into how we place value (or lack thereof) on various elements of society. Amidst the current rhetoric we are hearing regarding Australia being ‘all in this together’, one must ask pertinent questions to how we view our society as truly equitable.

Across the country, many people who are incarcerated face uncertain times as they are depleted of basic rights within the prison system. The United Nations Human Rights Office of the High Commissioner states that “Prisoners shall have access to the health services available in the country without discrimination on the grounds of their legal situation”.

Whilst we outside complain of being shut in with no apparent freedoms, prisoners have lost face-to-face interactions with support staff and their families. They have had to exist with little to no access to those basic rights due to unprecedented times, yet we should stop to consider the cost to us as a whole when we ignore a degree of transparency and equitable care within prison systems.

This becomes apparent when considering the health of those prisoners who may have a chronic health condition.

Statistics from the Australian Institute of Health and Welfare in 2018 (excluding NSW) state that 26 percent of prisoners have a diagnosed chronic health condition. Many of those who are incarcerated have conditions such as cardiovascular disease (4%), diabetes (6%) and asthma (15%). Of this population, 23% are also of Aboriginal and/or Torres Strait Islander origin and are at significant risk of infection.

Many other prisoners are from diverse cultural and low socio-economic groups who are disproportionately over-represented in the justice and prison system. Prior to becoming incarcerated, these groups were already facing gross inequities, including lack of access financially to effective health care service delivery.

Prisoners should be given the same degree of medical care as the rest of the population through State government provided delivery. Yet their care can be constrained by levels of access, funding and regularity, and prisoners don’t get to choose the care that is offered to them. Under normal circumstances, many of those with chronic conditions should be seen regularly by multidisciplinary teams to manage their health. People with respiratory issues, diabetes and immune-compromised people are at greater risk.

Since the pandemic began, there have been reports internationally of the prison systems’ abject failure to protect those incarcerated due to overcrowding and poor government response. A recent article published in The Lancet states that prisons are ill equipped to manage COVID-19.

Some prisons in the US have 70-80% infection rates, with modelling from the American Civil Liberties Union suggesting that some prisons could go to 99%. The ACLU also warns that there could be up to 200,000 deaths in US prisons alone and some early release of prisoners and other non-custodial measures have been undertaken to diminish the risk.

In Australia, the official responses from state governments have been lagging. To date we have had no deaths in prison due to a COVID-19 outbreak; however, there have been reports of both prisoners and staff being quarantined in a Queensland facility.

Concerns have been raised about hygiene and sanitation, and Sisters Inside CEO, Debbie Kilroy, has been speaking out about prisoners in some facilities having to buy their own soap and some have requested cleaning products to clean their cells. However, the Queensland Corrective Services Department stated that all prisoners have been given adequate supplies for cleanliness and procedures have been put in place.

States are also in different stages of isolation, and varied levels of response to COVID-19 for the prison system. The Queensland corrective services department are easing some of the isolation policies they had in place, while the Victorian system has retained a tighter control over their procedures, and in states such as Western Australia, each facility manages their own plan in relation to a potential outbreak within the premises.

While we have seen a decreasing rate of COVID-19 cases, we are still in dangerous territory and at risk of a second wave of infection. Therefore, the threat of prisons becoming the next cluster is ever-present, and those prisoners with chronic health issues face a particularly anxious time should infection take hold inside.

If we are all in this pandemic together, we need to ask questions of ourselves and of our governments as to what best outcomes we want for our citizens, regardless of where we see their place in civil society.

Who is monitoring state responses and implementation, and what will happen to those prisoners’ rights when restrictions are eased?

Without that transparency serious incidents can occur, particularly where there are power imbalances between staff and prisoners that have had most of their rights and societal privileges removed.

Health Minister Greg Hunt was recently asked about vulnerable people including prisoner health amid the pandemic; he stated, “people in whatever institution are very strongly taking responsibility for their own infection control management. At this point there are no known cases, to me at least, of prison infections, but that’s a watching brief”.

We need to ensure there is ongoing attention to the situation of at risk inmates and those on remand or lesser sentences during COVID19.

Whether you believe the prison system serves as punishment or rehabilitation, managing the health of prisons is critical in safeguarding our own health in the broader community.

PrevPrevious“As Australia slips toward fascism, where does the public health community stand?”
NextReconciliation Week: a time to reflect on strong Indigenous leadership and resiliency in the face of a pandemicNext