Shock and grief at loss of HIV/AIDS researchers and advocates: #IPCHIV14

The devastating news that some of the world’s leading HIV/AIDS researchers and advocates were on the downed Malaysia Airlines flight caused waves of shock and grief at an international Indigenous conference on HIV and AIDS in Sydney, and among the wider global health and medical community.

Delegates were told at the opening of the event on Friday morning that up to 100 delegates could have been on the flight, on their way to attend next week’s AIDS 2014, the 20th International AIDS Conference (IAC), in Melbourne. These numbers are yet to be confirmed.

The Joint United Nations Programme on HIV/AIDS (UNAIDS) said it seemed that “some of the finest academics, health-care workers and activists in the AIDS response may have perished” on their way to Australia.

The International AIDS Society (IAS) confirmed in a statement on July 19 that at least six delegates were on board.

The IAS has paid tribute to former IAS President Joep Lange who was travelling with his partner Jacqueline van Tongeren, of the Amsterdam Institute for Global Health and Development.

The names of those confirmed at this time by friends and colleagues on board flight MH 17 are:

UNAIDS said:
Professor Lange was a leading light in the field since the early days of HIV and worked unceasingly to widen access to antiretroviral medicines around the world.

“We are bracing ourselves to hear of the deaths of others who worked in the AIDS response as their names are officially released,” said Michel Sidibé, Executive Director of UNAIDS.

“The UNAIDS family is in deep shock. Our hearts go out to the families of all the victims of this tragic crash. The deaths of so many committed people working against HIV will be a great loss for the AIDS response.”

The International AIDS Society will go ahead with the AIDS 2014, which is due to start on Sunday, with US President Bill Clinton and activist Bob Geldof as keynote speakers. There will be a “global moment of remembrance” during the conference opening.

The Society described Lange as “a giant” of the HIV/AIDS movement. The statement said:

In recognition of our colleagues’ dedication to the fight against HIV/AIDS, the conference will go ahead as planned and will include opportunities to reflect and remember those we have lost.

At this incredibly sad and sensitive time the IAS  stands with our international family and sends condolences to the loved ones of those  who have been lost to this tragedy.

The International Indigenous Pre-Conference on HIV and AIDS, being held this week in the leadup to AIDS 2014, also issued a condolence statement on behalf of organisers and delegates, some of whom broke down on hearing the reports.

Our thoughts are with the friends and family of those lost in this tragedy.

David Cooper, director of the Kirby Institute at UNSW Australia, wrote at The Conversation that he received a call at 3am telling him that Lange, his friend, was on the flight.

Professor Cooper said his colleague of 30 years had “an absolute commitment to HIV treatment and care in Asia and Africa”.

“Joep was absolutely committed to the development of affordable HIV treatments, particularly combination therapies, for use in resource-poor countries,” Professor Cooper said.

Professor Lange was a professor of medicine and head of the Department of Global Health at the Academic Medical Centre at the University of Amsterdam. He served as president of the International AIDS Society from 2002 to 2004.

In his 30 years of researching HIV, he led pivotal trials of antiretroviral therapy and published more than 350 papers in peer-reviewed journals.

“Another outstanding area of [Lange’s] contribution has been his pioneering role in exploring affordable and simple antiretroviral drug regimens for the prevention of mother-to-child transmission of HIV in resource-poor settings,” Professor Cooper said.

“Both of these have been part of his dedication to increasing access to effective HIV treatment.

“The joy in collaborating with Joep was that he would always bring a fresh view, a unique take on things, and he never accepted that something was impossible to achieve.”

The Victorian Government announced it would fly flags at half mast in the city during AIDS 2014. A fireworks event planned in the leadup to the conference for tonight was cancelled.

The Australian Medical Association (AMA) said the medical community was “reeling from the news”:

“The AMA pays tribute to Joep Lange, who has been at the forefront of HIV research and treatment since 1983.

“The dedication of all the lost AIDS experts has made a profound difference in improving the life of those with HIV, particularly in resource-poor countries.

“The world has today lost many people who have played critical roles in the global fight against HIV.

“The AMA expresses its profound sadness and sincere condolences to the families and friends of all the victims of this catastrophe,” Associate Professor Owler said.

The Public Health Association of Australia (PHAA) also expressed “deep sorrow at the huge loss to the public health community – and specifically to the international AIDS community – resulting from the tragedy.

“There is an irony in the fact that so many of these people have dedicated their lives in attempting to save others from the AIDS virus and have died in such awful circumstances.

“Confirmation of the loss of people like Joep Lange, a former President of the International AIDS Society, and WHO Media Advisor, Glenn Thomas, along with so many other people at the forefront of the fight against AIDS, will be devastating.”

The president of the IAS, Françoise Barré-Sinoussi, was quoted by The Guardian as saying that the deaths “will be a great loss to the HIV/AIDS communities. If confirmed, it would be a terrible loss for all of us. I have no words really to try to express my sadness; I feel totally devastated if it is confirmed.”

“The people we have lost have played critical roles in the global fight against HIV.” 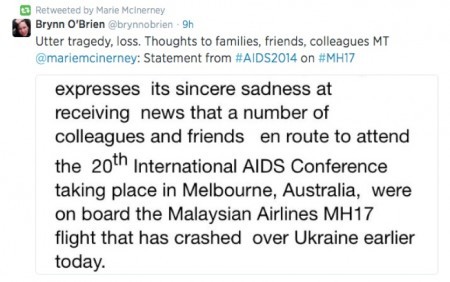 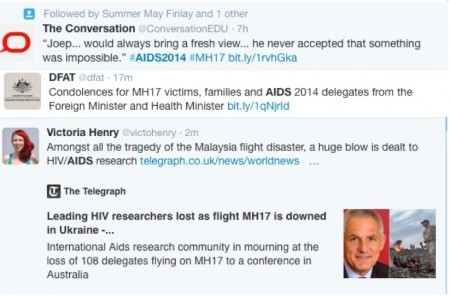 • You can follow Croakey’s coverage of the conference here.