Image from the cover of the 2018 Closing the Gap report

Opposition Leader Bill Shorten on Monday promised to seek to legislate an Indigenous Voice to Parliament, to provide “lived legislative experience of such a body” to get past scare tactics as a pathway to Constitutional change.

Shorten detailed the promise in response to Prime Minister Malcolm Turnbull’s 2018 Closing the Gap report– which, as widely reported ahead of Turnbull’s statement to Parliament, saw three of the seven Closing the Gap targets met in the past year.

The results are an improvement on last year  – and, Turnbull said, the most promising since 2011. 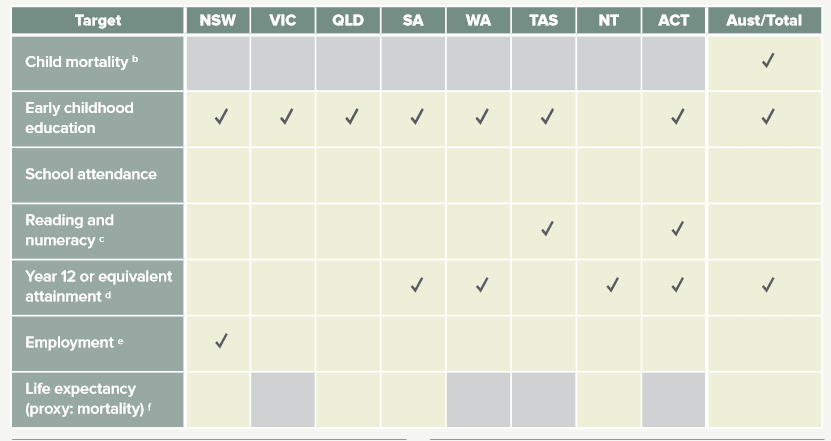 But continuing failure to meet the other targets (plus some contention about what the data means – see tweets below) underline the damning 10-year review of the Closing the Gap Strategy released last year by the Close the Gap Campaign –  led by more than 40 Aboriginal and Torres Strait Islander and non-Indigenous health and human rights bodies.

The review declared the 25 year strategy, launched by then Labor Prime Minister Kevin Rudd in 2008, had been “effectively abandoned” after five years – when the Coalition won office and introduced the much-criticised Indigenous Advancement Strategy, which took $500 million out of Indigenous funding in its first year.

Aboriginal and Torres Strait Islander Social Justice Commissioner June Oscar told ABC radio that she had “mixed emotions” about the 2018 report, acknowledging disappointment and frustration but wanting to be hopeful in response to some progress, and the potential of the Closing the Gap refresh, which won’t report until October this year.

“That’s a long time coming, we need to do better and we can do better,” she said.

Professor Tom Calma, who leads the Tackling Indigenous Smoking initiative, which recently won funding for four years, said the latest report was “very, very promising” but stressed the need for meaningful partnerships between Aboriginal and Torres Strait Islander communities and government versus “tokenistic and selective” consultations.

In his speech to Parliament, Turnbull continued to defend his decision to reject the Uluru Statement from the Heart, which health and Indigenous groups have said are key to Closing the Gap strategies and “emblematic of the gap between the rhetoric of partnership and the reality”.

By comparison, Shorten’s hard-hitting speech committed again to a range of priorities promoted by Indigenous groups, including Closing the Gap justice targets, urging the Federal Government to sign up to the Remote Indigenous Housing Agreement, promising Labor would convene a National Summit for First Nation children in its first 100 days in office, and urging Turnbull to reconsider the Uluru Statement.

It was time, he said, to be “better and braver than the path of least resistance” and for politicians to work together to deliver:

“Bipartisanship cannot mean an agreement to do nothing, it cannot be used as an alibi for the lowest common denominator”, he said.

If the Federal Government failed to act on the Uluru Statement, the next Labor Government would, as a first step, look to legislate the Voice to Parliament and would begin the detailed design work in Opposition, working with Uluru delegates and many other First Nations people who have led the thinking on this issue. He said:

“And if we form a government we will sensibly move to finalise legislation which establishes the Voice and includes a clear pathway to constitutional change…I think it’ll be easier for a referendum to succeed and harder for a scare campaign to be run if we already have lived legislative experience of such a body.”

In his speech, Turnbull defended the controversial cashless debit card, welcomed a new investment in the Tackling Indigenous Smoking program, and emphasised the importance of better, local data and focused on business. He released an Indigenous Business Sector Strategy, designed to “support Aboriginal and Torres Strait Islander business owners and entrepreneurs in a culturally relevant way”, praised the performance of the Indigenous Procurement Policy (which has lifted the level of federal procurement contracts won by Indigenous business from $6 million to $1 billion) and announced the trial of a new Indigenous Grants Policy.  He said:

Indigenous leaders and advocates welcomed the approaches but questioned their impact on Closing the Gap, without other major reforms, including those from a group of prominent Aboriginal and Torres Strait Islanders, including Oscar and the co-chair of the Prime Minister’s Indigenous Advisory Council Chris Sarra, who invited to meet last week in conjunction with the Council of Australian Governments (COAG) meeting to provide advice on the Closing the Gap refresh.

Responses to the Closing the Gap Statement

The Royal Australian College of General Practitioners (RACGP) and National Aboriginal Community Controlled Health Organisation (NACCHO) are calling for all levels of government to work with, not for Aboriginal and Torres Strait Islander people to reduce health disparity, after a recent report found the gap in life expectancy is widening.

The Australian Institute of Health and Welfare report found the gap is widening due to accelerated increases in the non-Indigenous population.

“To find out we are going backwards when it comes to health equality between Indigenous and non-Indigenous Australians is extremely disappointing,” A/Prof O’Mara said.

“It is particularly upsetting to learn of this regress on the 10th Anniversary of the National Day of Apology.

“I encourage all Australians, not just our political leaders, to reflect upon what we have achieved since then Prime Minister Kevin Rudd’s apology, and to consider where we need to be.”

A/Prof O’Mara said governments have committed to ‘working with, not to’ Aboriginal and Torres Strait Islander communities, but this commitment has not translated into meaningful engagement.

“The lack of action in response to The Redfern Statement and Uluru Statement from the Heart reflect this failure,” A/Prof O’Mara said.

“The engagement and participation of Aboriginal and Torres Strait Islander people will decide the success or failure of future policy decisions.”

“The Apology is an important part of healing for Indigenous Australians. It acknowledged the significant trauma and grief suffered as a result of past policies, particularly the removal of children from their families,” Mr Singer said.

“However, the Close the Gap strategy has never been fully implemented. There has been a decrease in funding over the past five years to Aboriginal and Torres Strait Islander health services; the biggest impact has been to our members and affiliates. The Close the Gap refresh being considered by the COAG provides an opportunity to reflect upon and reform current policy settings and institutionalised thinking,” Mr Singer said.

The RACGP and NACCHO are calling on the government to acknowledge the critical role of primary healthcare, particularly the culturally responsive care offered by Aboriginal Community Controlled Health Services, as it considered the Closing the Gap Strategy this year.

“This will play a vital role in addressing health disparity and ensure we finally make progress,” A/Prof O’Mara said.

Without justice targets and a strong focus on family violence, the Closing the Gap Framework will continue to fail Aboriginal and Torres Strait Islander women and children.

“A core component of any justice target has to be a family violence target, developed in genuine partnership with specialist Aboriginal Community Controlled Organisations. Without this we would be leaving a gaping hole in the Close the Gap Refresh process and we would be failing our women and children,” said Antoinette Braybrook, Convenor of the National FVPLS Forum.

Further reading (thanks to Lowitja Institute for compiling): 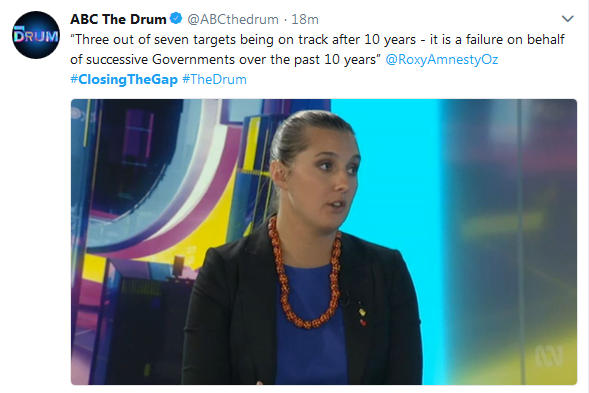 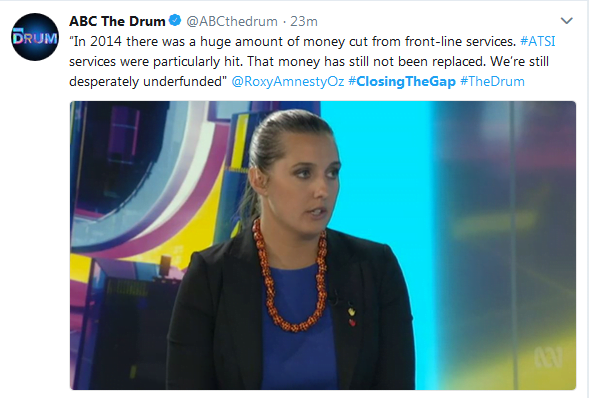 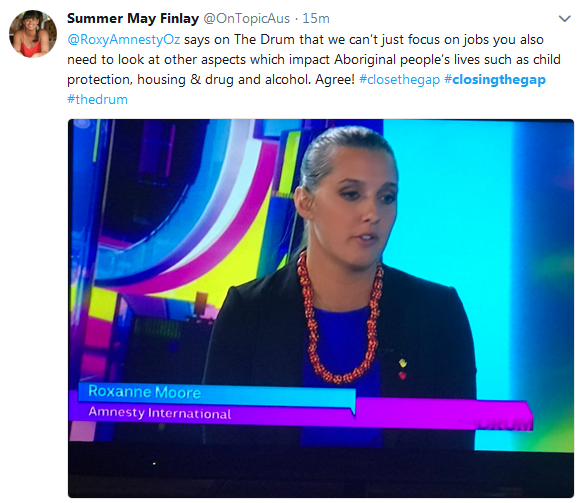 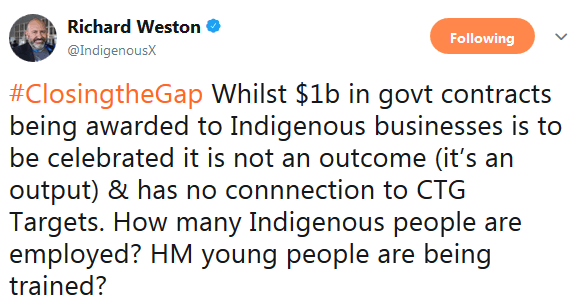 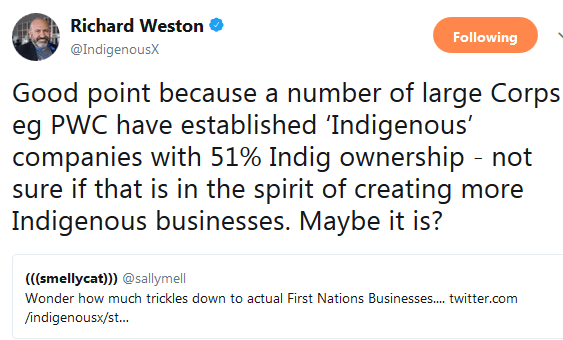 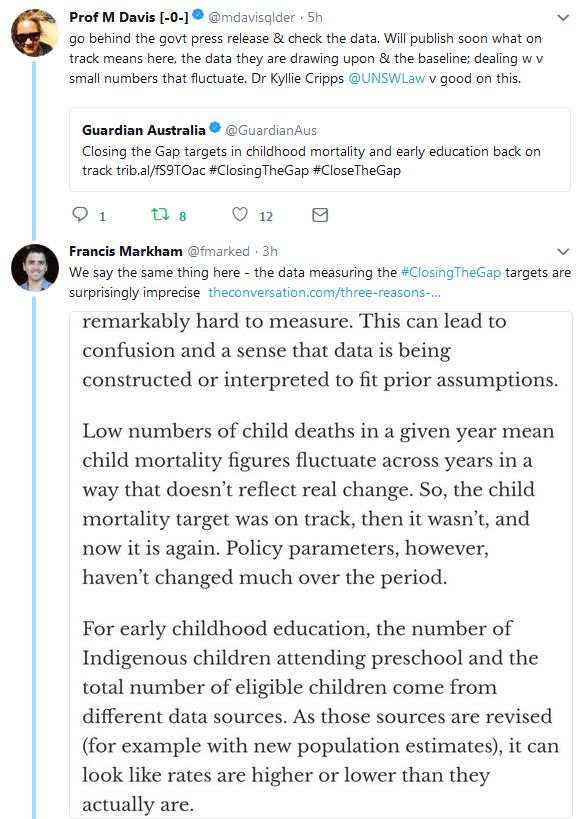