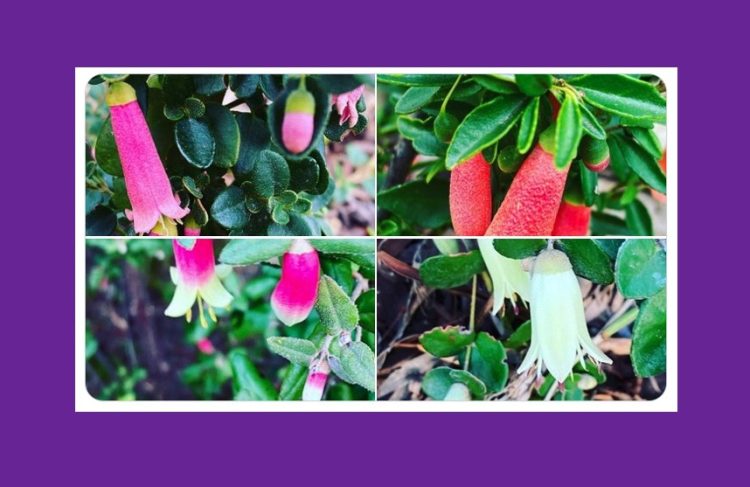 From listening to podcasts while gardening to creating the Birthing & Justice podcast series. Photos by Dr Ruth De Souza

Introduction by Croakey: If you follow Dr Ruth De Souza on social media, you will know that as well as being an engaged researcher with a background in nursing, she is a creative force with a passion for plants, gardening, food and surfing – amongst other things.

More recently, De Souza, a Vice-Chancellor’s Fellow at RMIT University, based in the School of Art and Design and Creative Practice Enabling Capability Platform, has launched a podcast, “Birthing and Justice”, as another way to engage health professionals in finding new ways to understand, co-design and implement sustainable cultural safety initiatives.

In the article below, cross-posted from her website, De Souza explains her career journey into podcasting and why she likes “extending research to beyond practice contexts to public contexts, so knowledge is democratised”.

To be a great nurse, I believe you have to be a great communicator. I am biased. I have taught communication to undergraduate nursing and osteopathy students, and I am a mental health nurse by background. I am interested in all forms of communication in health whether written or spoken.

Nursing has afforded me the enormous privilege of witnessing people at their most vulnerable, joyful and fearful. I have been there during life transitions, I have seen the world widely and deeply through the bodies, hearts and eyes of the people, families and communities of the people I have cared for.

I know that we as a profession wield incredible power and have the potential to cause harm, to gatekeep, to become task-focused at the expense of being in relationship. I am grateful to the nurses who have guided and led me, who have empowered me and shown me how to empathise and care for others with skill, evidence, and compassion. I am also grateful to the nurses who’ve extended my knowledge beyond the bedside, to the thinking about practice.

It’s funny thinking about the career choices you make and then how these shape your career trajectory. I enrolled in a Graduate Diploma in Counselling while working on a postnatal ward in 1994, after working in mental health for much of my career. I have written about this elsewhere and how the experiences of the poor care of migrant mothers in Auckland led me to research their experiences and think about them for more than twenty years.

Realising that working in the confines of the factory model of birth was not my thing, I was excited to work with others to develop a new community focused maternal mental health service. It’s there I became interested in education as my work increasingly began to involve providing education to community organidations and health professionals about mental health issues in the perinatal period. Later, I was contracted to develop a brochure on PND for the NZ Mental Health Foundation and worked closely with consumer groups to do so. It’s been superseded but I still love it.

I did a Masters degree and researched the experiences of Goan mothers in Aotearoa, then undertook a Families Commission project with the Plunket society to look at the experiences of migrant mothers in general. I also spent some time thinking about reflexivity and positionality and what it meant to be an insider/outsider or outsider – within as Patricia Hill-Collins calls it, and the moral aspects of mothering.

I later did a secondary analysis of the Korean (discursive) Families Commission data for my PhD along with interviewing Plunket Nurses. I also published the findings about Indian mothers in a book by Sekhar Bandyopadhyay and blogged about the experience of White migrant mothers. Later I talked to Chinese and Indian men about their experiences of becoming fathers in New Zealand. I also talked to refugee background women about their experiences of parenting and more recently have been researching the intersections of pregnancy, birth, migration, and digital technologies.

The time on the postnatal ward and later in the maternal mental health service shaped how I think about cultural safety in healthcare. From being a clinician, to an educator and then a researcher, I’ve been committed to sharing this work widely, mainly through talking and writing.

Increasingly though I feel like written communication has its limits particularly for those Todd Landman describes as the ones “I would most like to engage and influence”. I learned early when I started teaching mental health support workers in NZ and then later when I worked in the Centre for Culture Ethnicity and Health, how important it is to make research accessible to people. I remember my PhD supervisor David Allen from the University of Washington in Seattle asking me how I could make my PhD accessible to nurses and midwives who were in a position to change practice.

University academics are expected to engage with “industry”, and while I am comfortable doing this via social media, as both a blogger and tweep, a podcast feels next level. I like the idea of extending research to beyond practice contexts to public contexts, so knowledge is democratised.

It bugs me that the public who pay for us to conduct research cannot access it because it needs a subscription or is behind a paywall as the amazing Siouxsie Wiles points out. I did this years ago by creating an online Aotearoa Ethnic Network Journal to bring great thinkers, writers, artists together in conversation.

I also think we need to find other ways than writing to reach people. Since I got a Fellowship at RMIT and I have been based in the School of Art, I’ve been interested in how I might ‘play’ with different ways of communicating. A few months ago I collaborated with amazing artist Safdar Ahmed to create a short graphic comic for The Guardian. 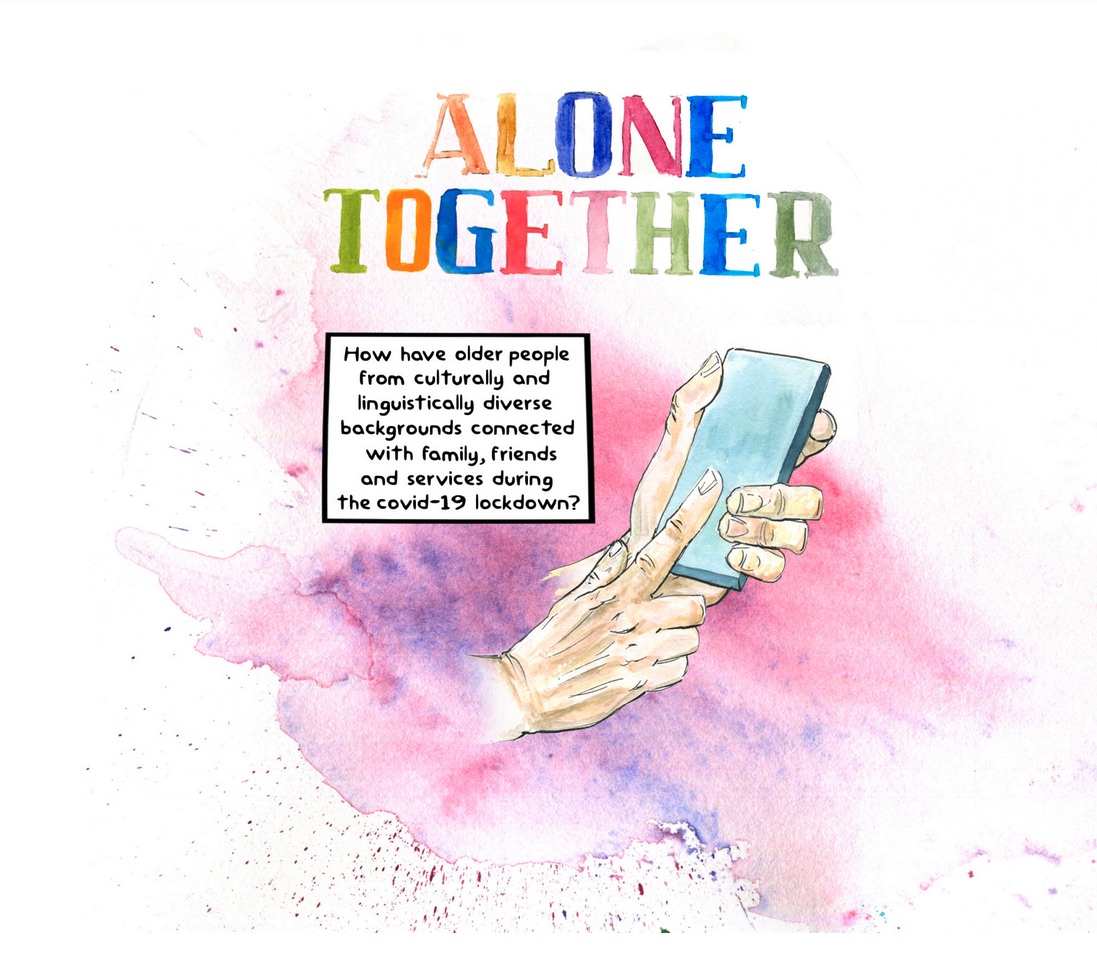 So, now a podcast! Robert Danisch says it is important to trust that my “training, expertise and experience” provide me with some useful skills and knowledge that people might benefit from. As I launch this podcast, I wonder if anyone will listen and whether I can build an audience. As an avid podcast subscriber and listener myself, I love that I can listen to brilliant people all over the world while I am gardening!

For the last few months, I’ve been working on a podcast to talk about birth in a settler colony and what it means for People who are BIPOC (Black, Indigenous, People of Colour). I’m not sure yet what the affordances might be of using podcasts to communicate research, but I am interested in how my work might reach a bigger audience.

When I started developing the podcast, I was worried that it might be considered academically underweight (whereas folks like Mark Carrigan suggest that podcasts are a “natural form of communication for academic ideas”).

Now I am (almost) convinced that a podcast can be a way to make research comprehensible so as to engage a broader public in one’s work as well as a way to build an academic network, kinda like a fireside chat, people can speak in their own voices and speak more freely or informally than conventional academic forms of dissemination.

Dr Katie Linders at the Oregon State University in conversation with Janet Salmons talks about podcasts as a way of helping to increase research literacy because “bite-sized pieces” are a nice way to synthesise research for people from a range of backgrounds. This means that researchers have to think about how they might communicate their findings to different audiences.

Cochrane is a network of researchers who provide high-quality information/evidence for healthcare knowledge and decision making geared to health professionals, patients, carers, researchers or funders who have also begun making podcasts as a dissemination tool for health research. Their format is a short summary of a recent Cochrane review from the authors themselves presented in under five minutes. They are recorded in more than 30 languages and include topics such as Does stopping smoking improve mental health?; What are the benefits and risks of psychological therapies for adults with persistent and distressing pain that is neither cancer-related nor a headache?

Cochrane Australia has a podcast The Recommended Dose designed to promote an informed and critical approach to healthcare where a journalist interviews researchers, thinkers, writers and health professionals.

The London School of Economics Public Policy Group use audio for academic dissemination with their aim to “bring academia online, and broaden access to the social sciences…to stretch the understanding and impact of research beyond the confines of universities.”

So, after much agonising I recently launched Birthing and justice which you can find on your favourite podcast app. I am aware that the language of human reproduction is changing and that not all pregnant people are women, or mothers so hope to reflect more of these changes in how to use language and think about birthing.

Please tell all your friends and those who might be interested in making services for pregnant and birthing people more culturally safe.

Overview of the discussions so far

Difference, writes Dr Naomi Simmonds, has always been intricately woven into the fabric of her life. A Māori woman, a mother, an academic and a leader Dr Simmonds’ world is encased by the structures of western thought and colonial legacies. Yet from within this space she finds ways to champion mana wahine in order to empower and liberate knowledge systems that have long been suppressed by western power structures.

What role does community play in childbirth? And why has childbirth become centred on the western hospital system? Karel Williams is an Aboriginal woman with family connections to the Palawa and Western Arrernte Nations and is an experienced Indigenous policy advisor and midwife who champions the culturally simple yet politically complicated practice of birthing on country.

Dr Mimi Niles has described healthcare as a very large, vast, deeply problematic institution. The New York-based midwife and academic grew up in Queens, New York to immigrant parents and this experience has led to the belief that every sort of disparity and inequity plays itself out in the bodies of black people in the United States. 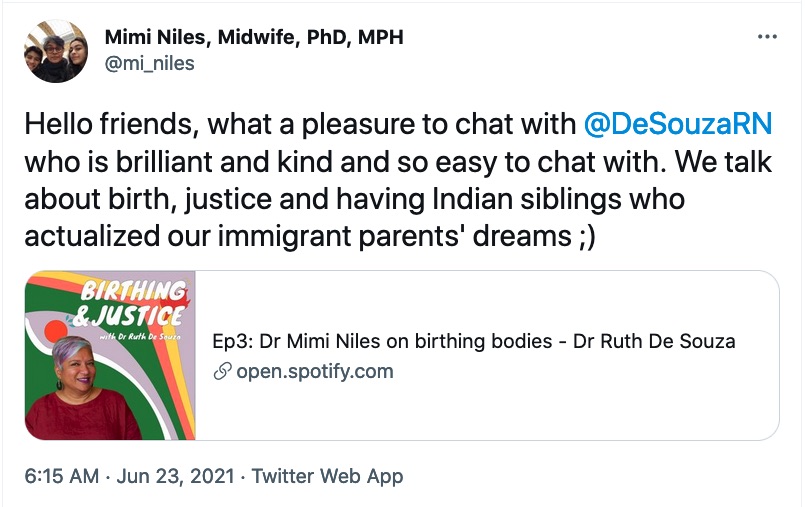 Click here to read more about the podcast and related feedback.

Dr Ruth De Souza is a nurse, academic and community engaged researcher in gender, race, health and digital technologies. She is a Vice-Chancellor’s Fellow at RMIT University and also has an Honorary Senior Research Fellow role at The Centre for Digital Transformation of Health at The University of Melbourne and her own consulting practice. On Twitter, follow @DeSouzaRN.

PrevPreviousEvery breath you take…but where is the action on air pollution?
NextDiscussion paper on the future of primary care leaves much to be discussedNext