Should the poor be able to spend their benefits on soft drinks?

Back in January, Croakey’s Washington correspondent Dr Lesley Russell filed this piece about New York City’s public health crusading Mayor, Michael Bloomberg. At the time, I wondered: what will Bloomberg and his team do next?

Here is at least some of the answer. He plans to stop food stamp recipients from using state funds to buy soft drinks. And it seems he is a man not only of action, but also with a bent for evaluation.

As the data keep rolling out about the full impact of obesity on health and the economy,  some cash-strapped state and local governments are dusting off an old idea: taxing unhealthy foods and beverages to generate fresh revenues for health care programs.

I’ve written before about the efforts of New York City Mayor Michael Bloomberg to force change in his city’s health.

He has banned smoking from all indoor public spaces (and wants to ban it in public parks, plazas and beaches too). He has banned trans fats from city restaurants and store shelves.  He required restaurants to post calorie counts on menus and he has a campaign against salt.

Bloomberg and his health commissioner, Dr Thomas Farley, aim to curb the exploding rates of obesity and diabetes in the city, which they claim are worsened by consumption of soda. One in eight New Yorkers has diabetes, and poor New Yorkers are nearly twice as likely as rich residents to suffer from the disease.

City statistics show that nearly 40 percent of public school children in kindergarten through eighth grade were overweight or obese. An OECD report released last month shows that the US is the fattest country in the OECD; it is projected that within 10 years three out of four Americans will be overweight or obese.

So it’s no surprise that in 2009 poor New Yorkers spent between $75 million to $135 million of the $2.7 billion in food stamps they received on sodas and sugary drinks.

Not everyone agrees that restriction is the best solution. Advocates for the urban poor suggest that such a move would patronise and alienate an already stigmatised population. In 2004, the Department of Agriculture (USDA) rejected a similar Minnesota proposal to bar people from buying candy and soda with food stamps, because it perpetuated the stereotype that food stamp-users make bad food choices.

Mayor Bloomberg has proposed instituting the soda ban for two years to assess its effects and determine whether it should be extended.  He and Farley argue that his proposal would leave food stamp recipients (about 1 in 8 Americans currently get food stamps; how much a family gets per month is determined by a number of factors, but typically ranges from less than $100 to more than $500) with more money to spend on (more expensive) nutritious foods.

As the graph below shows, the price of sodas has declined over the past few decades, while the price of fresh fruit and vegetables has risen. 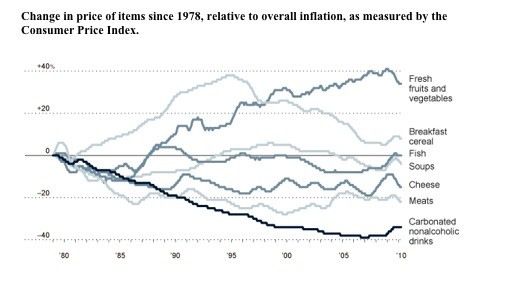 The typical American consumes almost three times as many calories from sugary drinks as in the late 1970s. This increase accounts for about half the total per-capita rise in calorie consumption over the same period.

Although organisers have opened markets in a wider array of neighborhoods and changed their marketing tactics to reach low-income residents, many food-stamp users still don’t know they can shop at the markets, lack transportation or time to get to them, don’t recognise the produce on sale – and therefore don’t know how to prepare it – or simply believe they can spend their benefits better elsewhere.

• A previous Croakey post on these issues that may be of interest.

Update, 12 Oct: Some critique of the proposal from a US food writer and commentator, Melanie Warner, with links to other relevant articles.

PrevPreviousA call to health policy researchers: have you examples of government gags?
NextMore (mostly) depressing reading on e-health: a bit on why, a lot on why not, and not much at all on how…Next